When you think of horror games, you envision a protagonist going through hell and high water to kill or escape from some sort of horrific entity. Carrion turns this preconceived notion on its head, coining the genre 'Reverse Horror' and placing you in control of a mysterious creature that looks like a clump of mince meat with tentacles. Its metroidvania gameplay impresses, while attention to detail in the pixel art aesthetic and the sound design aid in making the horror atmosphere all the more engaging throughout. 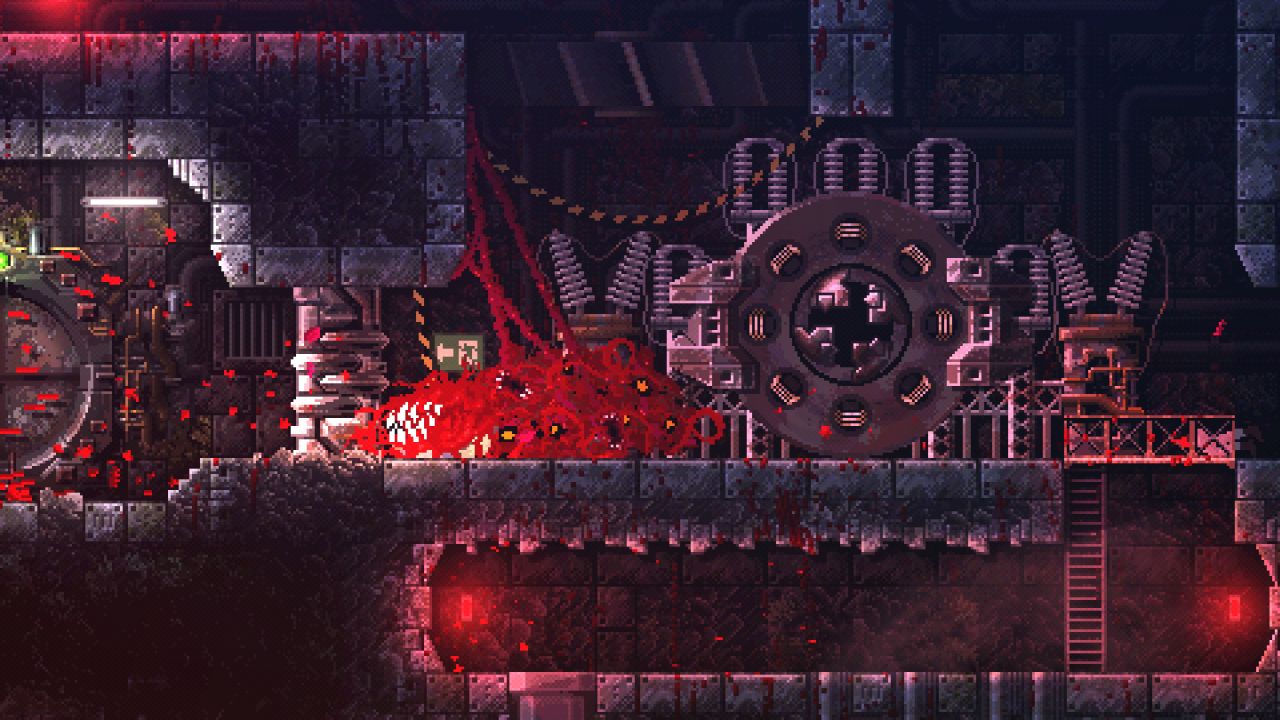 There isn't much in the way of storytelling in Carrion. After breaking out of a containment tube that human captors have kept this alien creature encased in, you assume the role of a tiny, tentacle-clad horror. It isn't clear whether or not the humans are in the right for imprisoning you, but that question quickly gets forgotten as you make your way into the facility, tearing humans to shreds and munching on their desecrated corpses, progressively growing bigger and more daunting as the game progresses. The ambiguous nature of the storytelling in Carrion continues through the entire game. There are some flashback segments that attempt to provide a view of the creature potentially being discovered, but these scenes lack explanation and struggle to clarify what's happening. The narrative remains far too cryptic throughout to truly ever ascertain, however it does succeed in nailing a chilling and ambiguous ending that leaves you with even more questions. The ending is cool, but the rest of the story is too obscure to be appreciated.

While the narrative is average in execution at best, the haunting atmosphere is amplified by the brilliant sound design and the highly detailed 16-bit art style. As you graciously fling around levels as the mince meat monstrosity, it becomes immediately noticeable just how much effort went into the look and sound of this world. You hear the squelches of each tentacle as they grip surfaces, and you are rewarded with a chilling yet satisfying crunch as you rip people apart and devour their remains to regain health. Chains that are present throughout the facility also rattle as the creature moves through them, visibly swaying after being interacted with. These kinds of touches are small and don't have any effect on the gameplay, but they do succeed in providing an atmosphere that places you in the world. The soundtrack composed by Chris Velasco of Overwatch and Bloodborne fame is also great, perfectly capturing the ominous nature that the game so heavily emanates.

Akin to the atmosphere, the gameplay of Carrion is also a highlight. As the tentacled beast, you make your way throughout the facility, killing everything in your way. Initially you start off as a small fry, with only a couple of tentacles and a simple attack that allows you to grab and throw objects. As the game progresses you unlock an arsenal of abilities and continue to grow bigger, turning the once small creature into an overpowered Cronenberg-esque mess. You go through levels finding cracks in walls known as hive crevices. Entering them will spread your biomass into the area, which in turn allows the crevice to serve as a save point and a healing station. Finding all the biomass crevices will open the door at the end of each level required to move onward. Each locale has handy new abilities that you can utilise to access previously inaccessible areas. The metroidvania gameplay loop present in Carrion has been done to death, and yet it remains addictive throughout thanks to the smooth controls and fun combat. 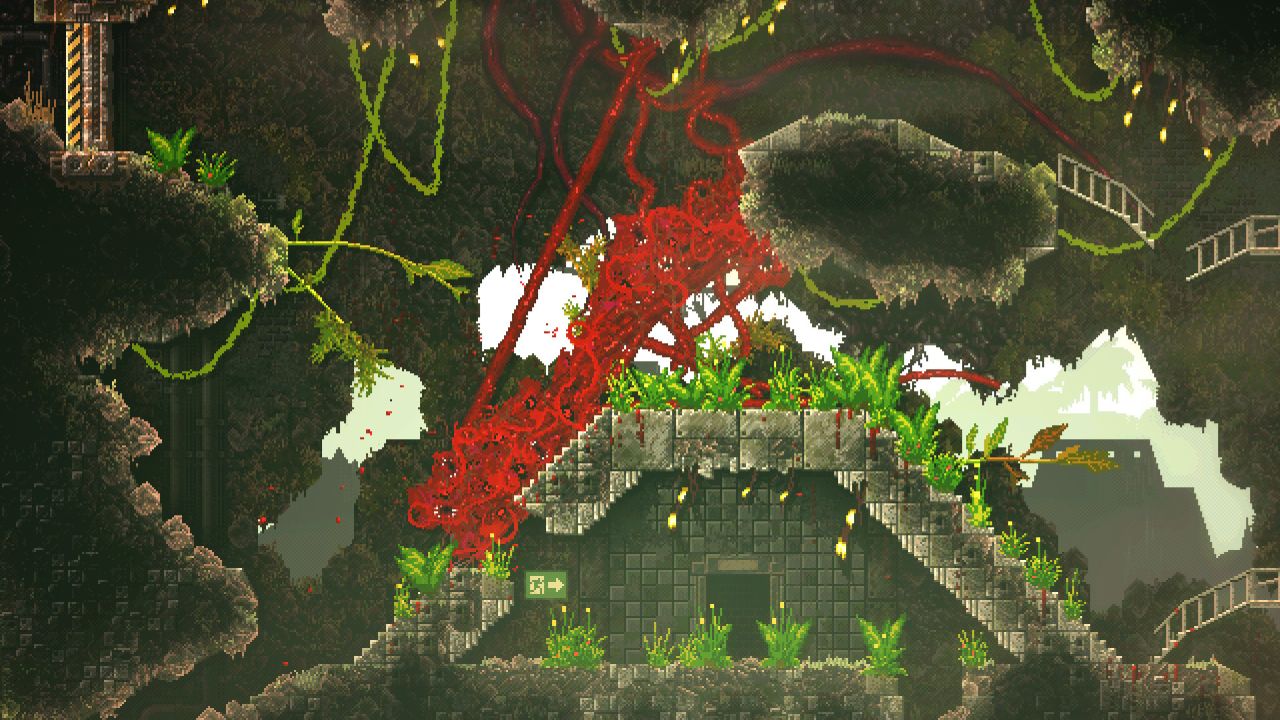 The tentacle covered creature moves with grace and finesse, gripping onto walls and flailing soldiers about with its numerous tentacles. Controlling this organism feels better than it has any right to, with buttery smooth control that somehow always sees its spaghetti body go exactly where you want it to. Towards the end-game however, when your biomass is at its greatest, the controls begin to slip up a bit which is upsetting.

Your abilities include invisibility, attacking with an extremely devastating dash, and even the capability to possess humans. In most cases you are restricted to using the ability the game wants you to, but the moments in which you have complete freedom to tackle a room of enemies are ridiculously enjoyable. You may want to slither through the vents and methodically pick off your prey, or perhaps rip the door off its hinges and make a grand entrance. The abilities available to you at any given time are determined by your current size (known as biomass), making for a rather interesting and unique approach to puzzles that see you removing or gaining biomass to be in the right form to use the required ability.

Puzzles start off relatively simple given the limited skill set, but as time goes on, the difficulty ramps up. Pools of red fluid exist throughout levels and serve as a place for you to drop your biomass to access different subsets of abilities. Retrieving the dropped tumour afterwards will restore the biomass. This way of navigating the puzzles is simple yet it feels surprisingly rewarding to accomplish. It also helps that these biomass deposit pools are always placed around such puzzles, making it easy to discern when the right time is to get puzzlin'.

Speaking of level design, it's generally quite solid also, with the metroidvania maps doing a serviceable job of flowing you through efficiently. It isn't perfect though, as there are occasions where you can find yourself lost, forced to meander through rooms you've already cleared in order to get back on track. Further adding to this annoyance is the lack of an in-game map, a cardinal sin in any metroidvania. 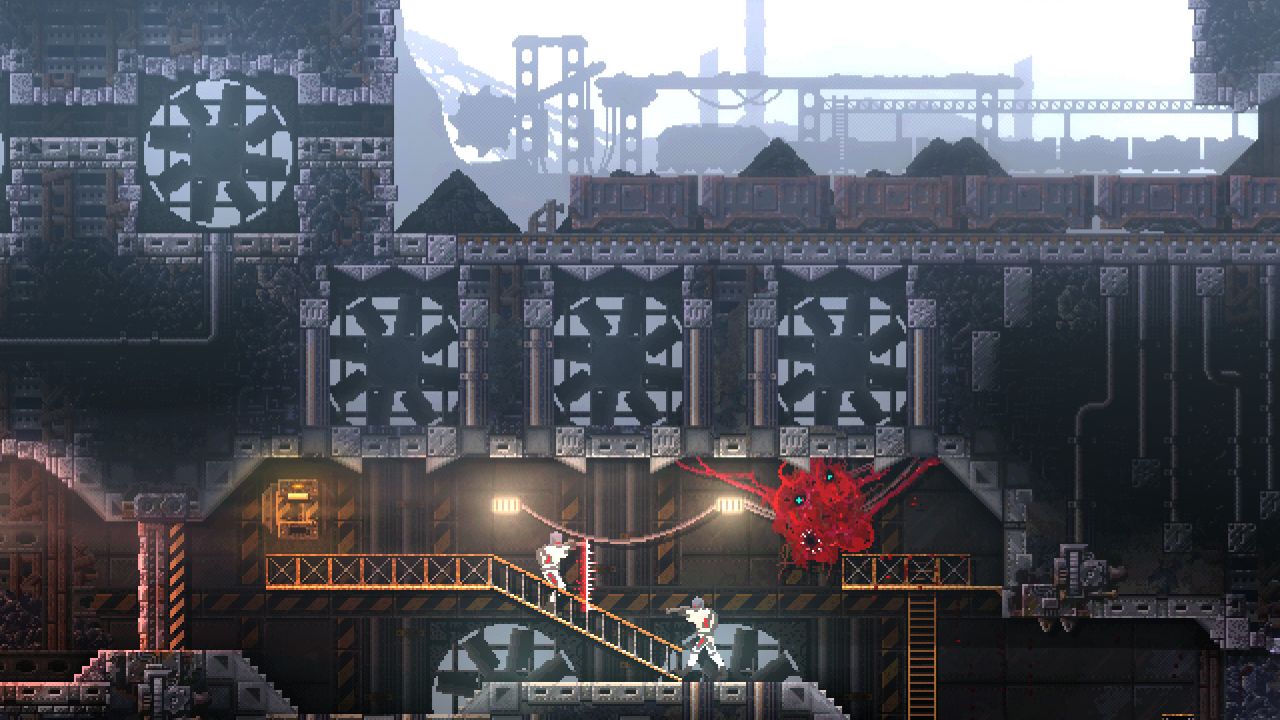 Much like the unsuspecting staff at the facility, Carrion succeeds in catching you off guard. Its gameplay is fantastic and the roughly 5-hour runtime ensures that the interesting premise doesn't overstay its welcome. The game does have a few minor hiccups though. The lack of a map feature is peculiar and can lead to you getting lost easily, the otherwise perfect controls get sloppy towards the end of the game, and the story despite its clever finale never truly gets off the ground. Despite that, Carrion is a novel twist on the horror genre we've grown accustomed to.

90
No issues were observed.
Overall
80
Carrion is simply a great time. The metroidvania gameplay loop is addictive, while its sound design and highly detailed pixel-art look makes it a joy to hear and look at. An average story and lack of an in-game map sap some of the enjoyment, but Carrion's ability to have you play as an unstoppable monster is gory grandeur. 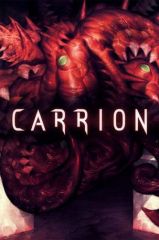 All videos for Carrion (1)
Advertisement ▼