WE SHOULD TALK
Platform: Xbox One
48
SummaryNewsArticlesVideoScreens

We Should Talk Review

Talking into and out of trouble

It may not be the same for everyone, but the phrase "we should talk" conjectures an ominous mood. Sure, the phrase could just be a preface for good news, but more often than not, a bad conversation is sure to follow. The type of conversation that would make you think back on prior discussions to try and remember if you said or did something bad. Considering the awkward feelings it may generate, We Should Talk seems like a perfectly apt title for a narrative experience. One that asks you to think about what you say and how you say it. And depending on your reactions, perhaps that phrase won't carry such a negative reputation. 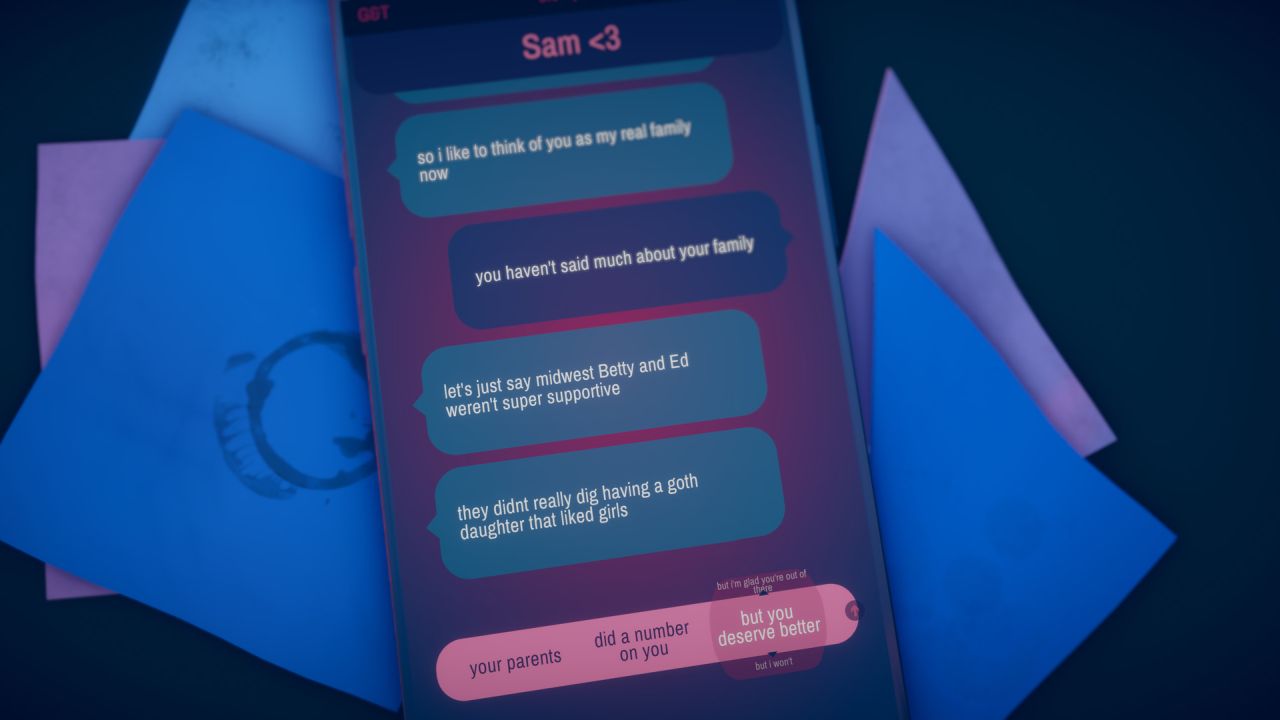 In We Should Talk, you step into the shoes of an unnamed young woman who is stationed at her favorite bar. The Getaway serves as the perfect location to unwind after a difficult day of work. The drinks are plentiful, the bartender is friendly, and the mood is just right. After exchanging pleasantries with Sarah, the bartender, your current girlfriend, Sam, begins texting you. In one night, you'll juggle between your relationship with Sam, the ex-boyfriend who is back in town and in the bar, and a stranger next to you who appears to be waiting for a date of their own. How you choose to interact to the three of them will determine the course of your romantic future.

Considering that it is built around these conversations, We Should Talk lives and dies by their quality. The most engaging partner is Sam, which makes sense considering she is the one you have the strongest connection with. The dialogue between you and her feels natural, and the characterization given to your partner is strong. Just from the messages, you develop an understanding of her history and how that affects your current relationship. Maybe it's because I have been in similar situations in the past, but I genuinely felt bad when I did something to upset her. Brushing off their concerns and qualms carries all the awkward weight it would in real life.

It's a shame that this level of care wasn't given to the other characters hanging around the bar. Sarah seems like good company, but outside of some flirting, she doesn't offer much besides a cold drink. Dante, the ex who is back in town, could have been an interesting personality to deal with. He may be back for a gig, but he also has his eyes on you. Even if you agree to meet on the side, the conversation wraps up too quickly. You don't get a picture of the relationship you had with him other than the fact that it happened.

Finally, there's Jimmy, the stranger who is waiting for his date. He comes on strong, and how you react to that will determine if you gain a new friend or not. The game doesn't give you enough incentive to want to befriend this person, though, other than just trying to be nice. With as little development there is for each of the three patrons, it's hard to get invested in their tales. 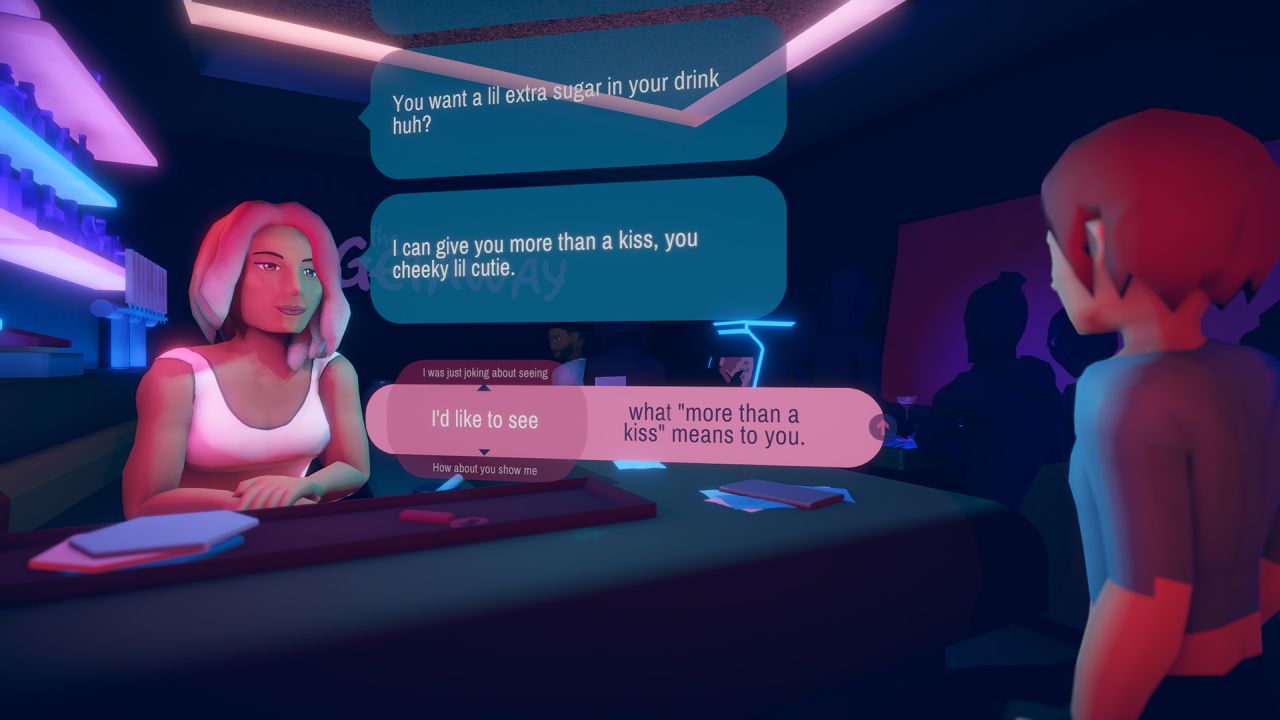 Then there's the fact that the player character is little more than a blank slate for you to inhabit. We get little information on her past, other than the fact that she goes to this bar a lot and that she used to date Dante. And when you do get the opportunity to delve more into her backstory, there's nothing there but boilerplate dialogue. You get so caught up with dealing with Sam and her bag of issues, that you learn little about yourself. It makes these conversations feel off from the real deal. If one person is harping on their issues, the other usually has a frame of reference to relate to it from. If you hear about someone's parents, you can usually relate it to your own. But since you don't have any of that history, it just turns into you being nothing more than a sounding board for Sam's problems.

We Should Talk is designed very much like a visual novel, but one that sticks to one static location. The way the conversation system works is that when you are given a chance to respond, you can swap out specific words and phrases. This can change not only what you are talking about, but the tone as well. For example, when Sam asks if she could tell you about her day at work, you could either hear her out or shut her down. How you handle these interactions will go a long way towards determining your relationship status by the end of the night. It's a simple, but clever, way of phrasing responses. Tone is incredibly important, even in a text message, so it's good that the title takes that into consideration.

The AI does a good enough job of appropriately reacting to what you say, but there are some issues. Occasionally it seems like Sam will say something in response that doesn't match what you said, but rather where the story is supposed to be headed. A glaring example was her wondering why you don't know why Dante is back in town, despite that not coming into question during the conversation. There also seems like a glitched out piece of dialogue concerning Sam's parents that doesn't work. There's an achievement tied to it and everything, but when you question her about her folks, the response you get doesn't make sense. 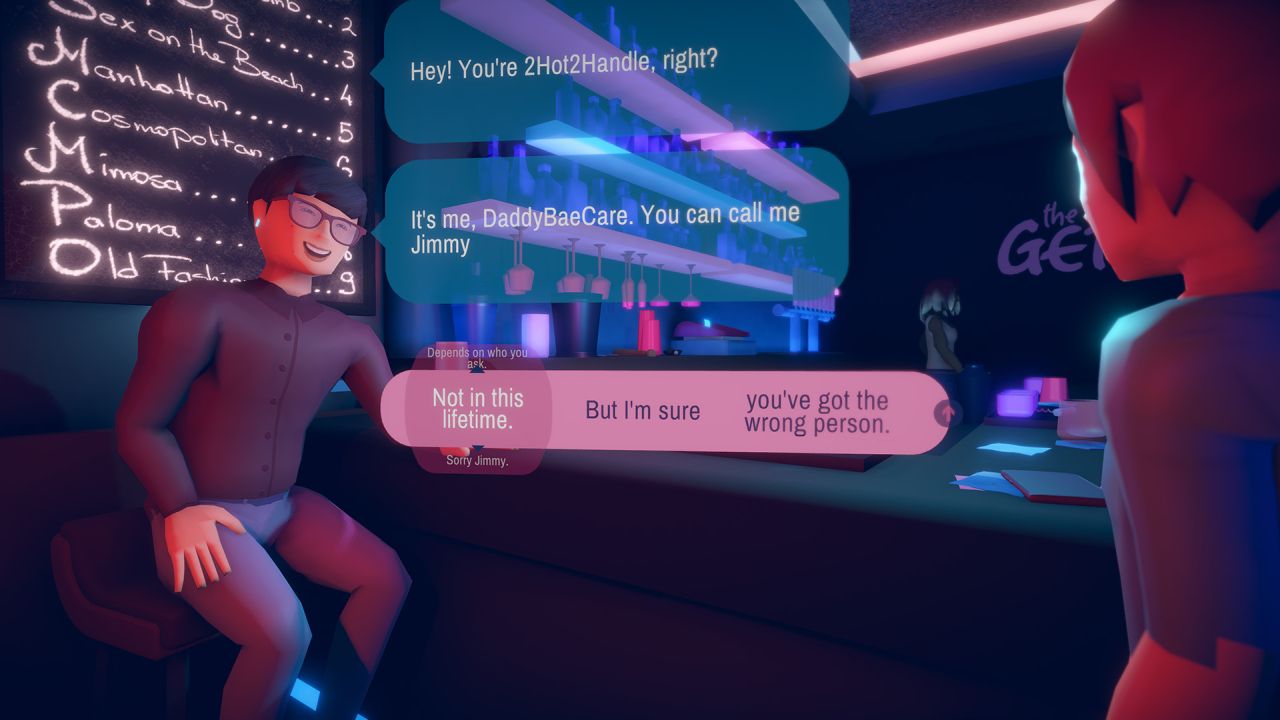 Each run through We Should Talk takes between 20-30 minutes, and with 9 different endings, there is, in theory, enough incentive to play through multiple times. However, the lack of variation in some of these runs makes playing through them multiple times a chore. There's no fun in reading the same boring dialogue repeatedly in hopes of getting a different conclusion. In order to justify making subsequent playthroughs more enjoyable, there needed to be more varied responses and branching conversations. The gameplay isn't strong enough to make up for the staleness that pops up after your first few runs.

With most of the action taking place on the screen of a phone, there's not a whole lot of visual flair to We Should Talk. The character models are lacking detail but manage to have some simplistic charm. The lack of polish on both Sam and the player character is surprising, though, as they are even worse off than the folks at the bar. The soundtrack isn't deep, and you'll probably get annoyed at hearing the same few tunes. The lo-fi electronic music does fit the melancholy tone of the title, though, so that's one benefit.

We Should Talk is an interesting experience, but not necessarily a terribly enjoyable one. The idea of navigating tumultuous relationships over the course of one night is fascinating, and the mechanic of switching dialogue out to match tone is clever. However, there's just not enough depth and content here. You'll quickly get sick of reading the same static conversations again and again, and the lack of characterization is apparent in every character other than Sam. In its current state, the title feels more like a glorified demo rather than a full-fledged experience.

Our ratings for We should talk on Xbox One out of 100 (Ratings FAQ)
Presentation
44
The visuals have a certain charming style to them, but it's hard to ignore how undetailed everything is. There's nothing of interest in the bar and the character models vary from mildly appealing to bland as can be. The music fits the mood of the game, but there are only a handful of tracks, which means plenty of repetition.
Gameplay
48
We Should Talk is a visual novel, so it would be foolish to expect deep gameplay mechanics. The title is built around discussions, and that system works well enough. The lack of depth in most of these conversations, though, makes repeat playthroughs a drag.
Single Player
38
The first go through We Should Talk is decent enough, but subsequent treks gradually lose their luster. Only the text chain with Sam offers enough variation to mess around with. The rest of the cast lack any sort of depth after their surface level introductions.
Multiplayer
NR
None
Performance
60
Outside of a long-ish load time at the start, We Should Talk runs well on the base Xbox One. However, the fact that one of the achievements is broken right now due to one of the dialogue chains being off is inexcusable.
Overall
48
We Should Talk is an interesting first effort from the small team at Insatiable Cycle, but it feels more like a beta than a finished product. There's just not enough content here to justify taking the time to check out this narrative adventure. 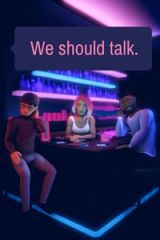