The Assassin's Creed franchise has taken players all over the world, to numerous different epochs. It has been not only a consistently enjoyable series, but one that's even proven its worth as an occasional educational tool, given how much effort goes into recreating these historical settings. For its next adventure, the franchise will head into the Viking era, as they attempt to expand their empire and settle overseas, into East Anglia. We had an opportunity to get a few hours of hands-on time with the demo of Assassin's Creed Valhalla, and it proved to be very much in the same vein as the two most recent RPG-leaning entries. 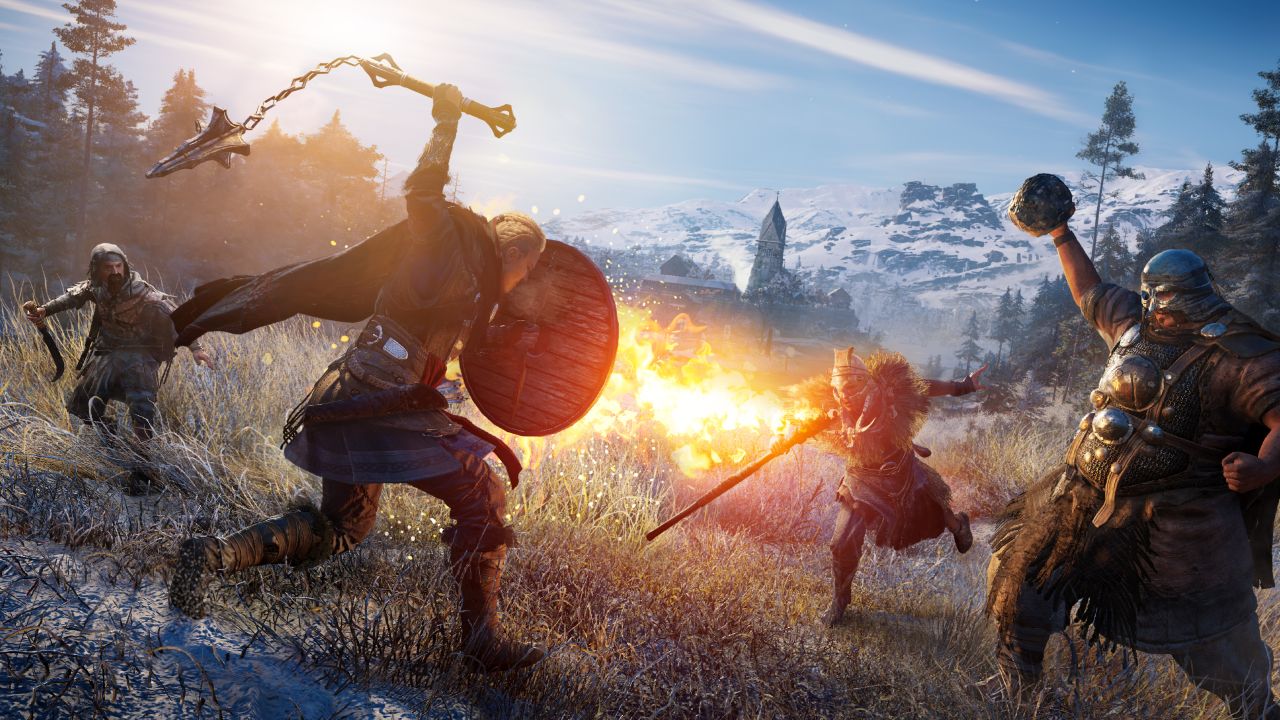 Valhalla follows the saga of Eivor, a Viking raider during the 9th Century invasion of England; his goal is the settling of his people in this new land, at any cost. However, the nation is already in turmoil, King Oswald is presumed dead, and bandits and rogue Vikings are causing trouble. Players will once again be able to choose between a male and female protagonist. Our demo saw Eivor arrive at a village that's been recently battered by such criminals, and so he makes a deal with the local leader. Eivor will clear a nearby encampment of enemies, and in return the locals will assist his Vikings in retaking Burgh Castle where a rogue Viking faction is holding up.

We ride out to the small church where the enemy group is situated. Eivor has a raven to help him observe the area from a bird's eye view; however it no longer tags any enemies, and instead gives an overview of the area and any points of interest. Instead, players use Odin Sight as a sort of pulse that temporarily reveals foes and items around you. It's a change for the sake of change, and doesn't make a huge gameplay difference from our experience – but it does encourage you to head inside much faster, and not spend minutes flying around, tagging all enemies. Stealth remains quite similar – you crouch to enter stealth mode, parkour your way around by climbing on almost anything, and perform silent assassinations from behind or above. With the external area cleared, we head inside the church where stealth was difficult, and so we entered combat.

The group of foes inside the church were tough combatants: a very tall and strong miniboss, as well as two personal henchmen. Eivor primarily uses his sword and shield to hack away and block, and can also dodge and roll around. Enemies also use shields heavily, requiring you to bash on them for a bit to stun/reveal their weakness. After a lengthy tussle, the foes have fallen, and we climb to the roof of the church to blow a horn signaling all-clear. The men from the other village arrive, and confirm their promise to support us during the upcoming assault.

Before moving on to the next major story quest, we drop by a nearby town of Northwic, where we complete a few minor quests and World Events. In one, a girl is calling for her horse to cross the river, and so we bring it to her – only to learn that she has tricked us into stealing it. In another, we meet a poet who thinks lowly of us, so we engage in a rhyme battle to rebuff his insults. Another quest had us help a young boy chase his cats around the town. As previously, players can make various dialogue choices during conversations and quests. Eventually though, it was time to return to the main quest line. After climbing the town's Observation Point to Synchronize, and diving off of it into a pile of leaves, we set out to the camp to begin the assault mission. 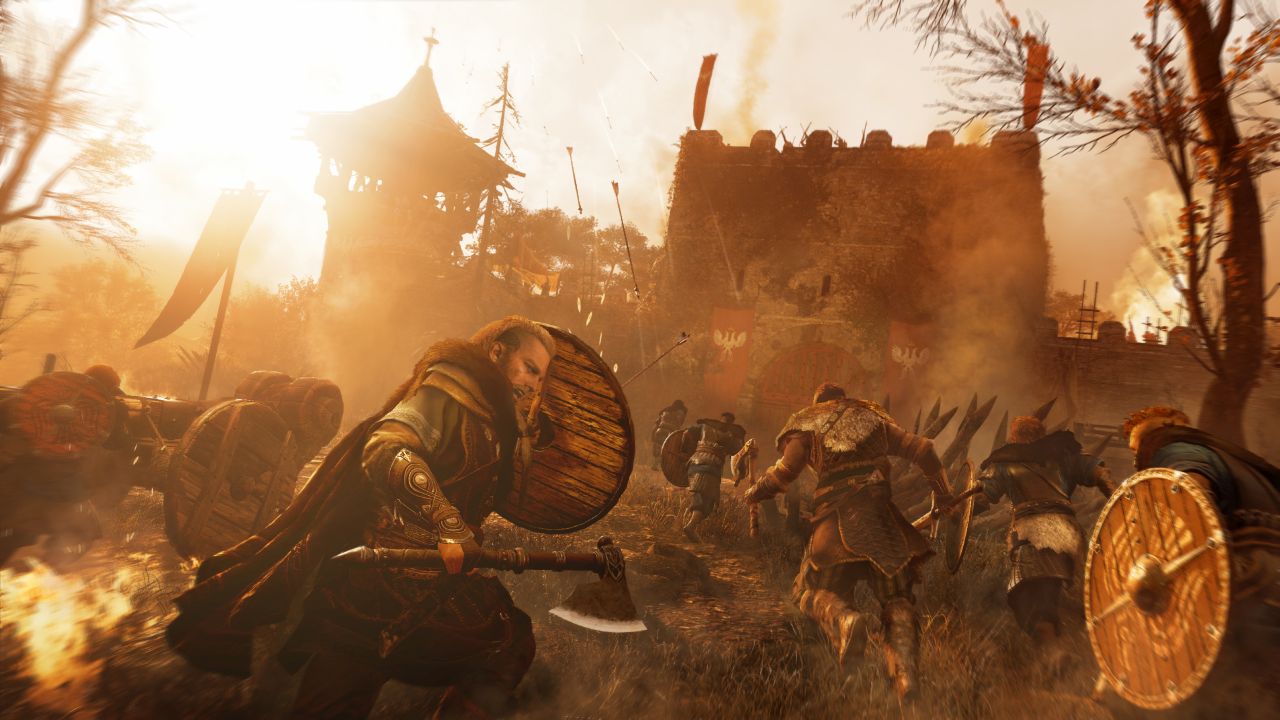 The assault on Burgh Castle began with our raiding party approaching by water with boats, having to use the brace command against incoming fire arrows as they tore up the stormy night sky. Once near the castle, Eivor ignited the lead boat and jumped off, letting it crash into the castle wall and create an opening. The Vikings went rushing in to the first court yard, fighting off the defenders and also pushing a battering ram ahead. Here, we had to fight off various enemies on the ground, but also pick off archers at the walls. We used a bow to explode oil above the gate – which was otherwise being used to set our battering ram on fire below. Players can also choose to join the battering ram team and help break through manually. With the first gate down, we were into the second court yard – with more foes on the ground, more archers, and more enemies trying to ignite the ram team.

The battles were long and fierce, as the enemies were tough and Eivor was constantly getting struck by arrows and even set on fire. To heal, you have a limited ration inventory, or you can pick up berries that grow about – both were in short supply in the battle. After failing a couple of times, it was time to review our gear. The inventory system was very similar to the most recent AC titles, with armor, helm, braces and boots. We could swap out the gear for something more powerful, or upgrade it with materials on hand. The weapon and shield could also be swapped/upgraded, and the choices included axes, spears, and of course the bows.

A new aspect to Valhalla is how the skill tree is handled. Earned experience can be redeemed to unlock new branches of the tree, and while you still have an overall power level, there are three distinct paths – Wolf, Bear, and Raven. Roughly, these areas align with strength, stealth, and cunning. But the new mechanic is that all gear you find also falls into one of these three categories – so items you find may grow more powerful once you invest more skill points into a particular branch.

The more familiar mechanic to the combat are the special abilities, of which you can equip up to four for both melee and ranged. These special attacks have powerful effects, such as knocking enemies away or throwing a bunch of axes at them. To use the attacks, you first unlock them by finding Books of Knowledge out in the open world, and then binding the four you want to your loadout. In battle, there is a meter that builds and allows use of these attacks.

After gaining improved equipment and stronger skills, we headed into the battle at the castle once more, as the traditional vocal Viking music filled the air. This time, we broke through to the third courtyard and the main keep, where a few mini-bosses appeared – another strong swordsman with his henchmen, as well as berserkers who dual-wield axes and are fast. With enough strikes, enemies would stumble, letting you stomp on them, or perform vicious takedown animations. Having battled through, we climbed atop the keep and confronted the main rogue Viking leader, engaging in battle against him and his pet wolf. This boss encounter proved challenging, but we did succeed, and were faced with a choice at the end to spare his life. 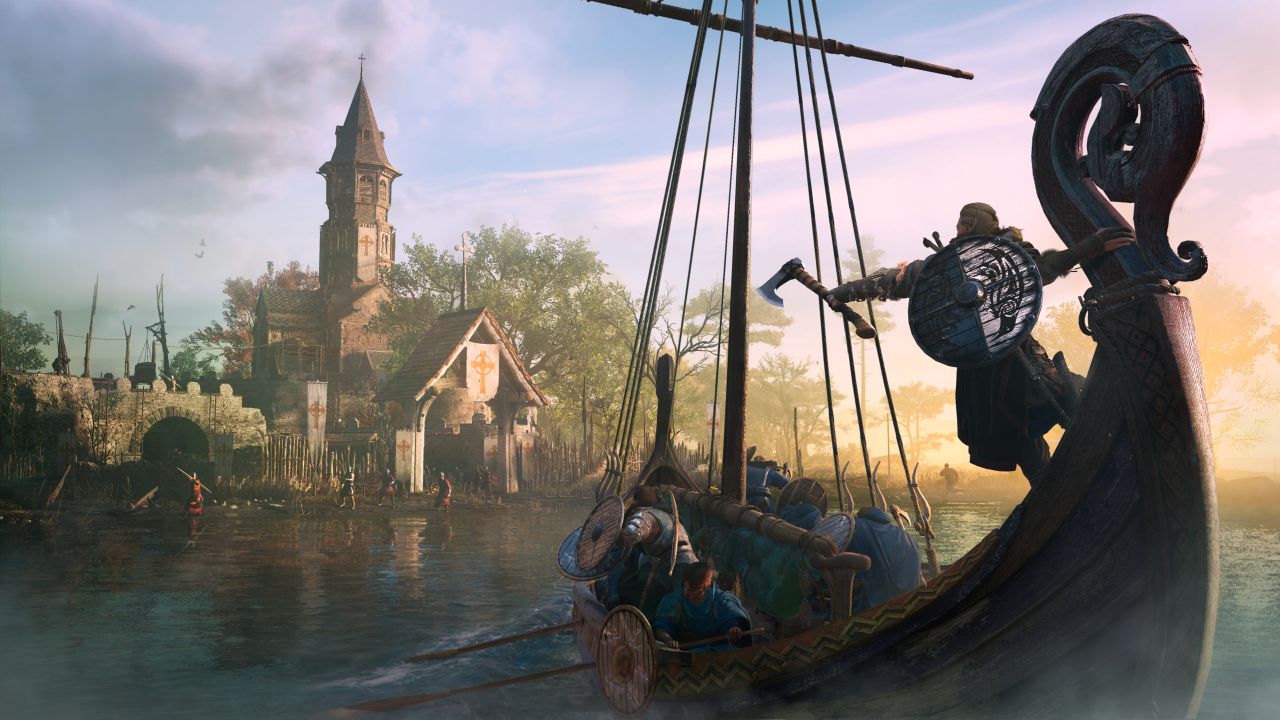 With the castle clear, and having re-united with King Oswald who turns out to be alive and well, our next main quest is a joyous one – to attend the King's wedding to his new Viking bride. We rode out to the wedding spot, where we observed the brief ceremony, had a choice to say a few words, and then participated in a couple of activities – a minigame trying to outdrink our Viking friend, get a drunk off the roof, and shoot arrows while intoxicated. With the wedding over, we parted ways with King Oswald, who agreed to uphold the agreement to let Eivor settle some of his lands in exchange for being an ally.

As the main quest storyline of our demo concluded, there was one more activity to undertake. We took a boat along the river to a nearby castle identified as a Raid. In this activity, a group of fellow Vikings will join Eivor during the assault. But because we were on the boat, it was a perfectly seamless transition as the warriors jumped off alongside and began fighting. We fought our way to the inner structures and again faced off a few bosses inside. We needed an ally to kick the door open to the main structure, so all foes outside had to be dealt with first. Inside, we fought a few tough foes, and were victorious – letting the team open the treasure chests inside with lots of resources and a few rare items. With that, it was time to wrap up the demo.

Assassin's Creed Valhalla is shaping up to be a fairly familiar, but still satisfying new entry in the series. From our time with the game, there was a great variety of content to undertake, which seems promising for the full experience. The RPG aspects remain, giving players choice both in and out of combat. And just as the previous games, the developers have done a great job of realizing this new Viking setting, with the 9th century England sure to appeal to fans of this time period. Assassin's Creed Valhalla is planned for launch on PC, Xbox One, and PS4 on November 17, 2020. Xbox Series X and PS5 versions will follow.