SHANTAE AND THE SEVEN SIRENS
Platform: Xbox One
68
SummaryNewsArticlesVideoScreens

Shantae and the Seven Sirens Review

The little franchise that could, Shantae has now been puttering along for close to 20 years. When you consider the series' humble origins and lack of big-name publishing, that's incredibly impressive. It's also impressive that the franchise has delivered nothing but quality entries over all these years. If anything, the series just reached its peak with the previous entry, Half-Genie Hero. For the latest chapter, Shantae and the Seven Sirens, Wayforward chose to originally debut it on Apple Arcade. After a period of exclusivity, the sequel has finally arrived on the major consoles. 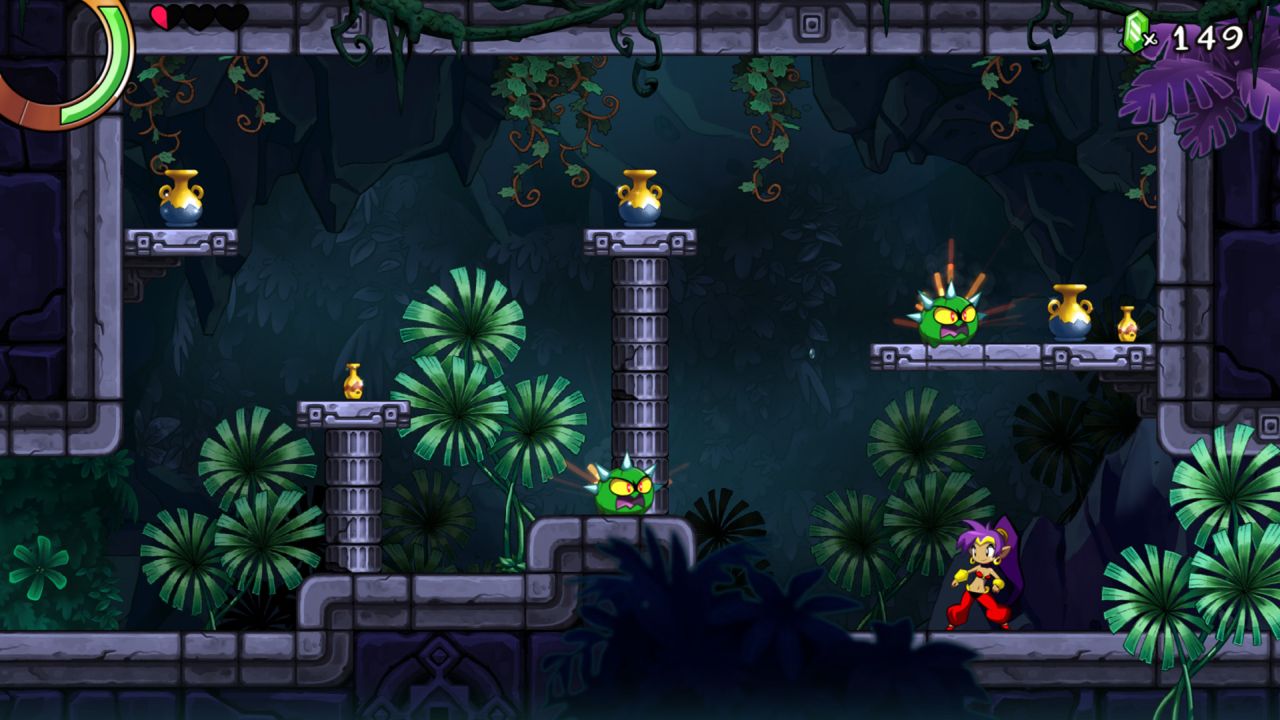 With all the heroics she does, it's no surprise that Shantae has never taken a vacation. When the opportunity arrives for her and her friends, though, she doesn't hesitate to embrace it. The half-genie has been invited to Paradise Island to take part in the Half-Genie Festival with several others of her ilk. The other half-genies have their own unique skills that separate them from the titular heroine. These traits, though, don't prevent them getting kidnapped during a performance at the festival. Unfortunately, it appears that even whilst on vacation, Shantae must save the day once more.

If you were to look up fluff in the dictionary, there is a good chance you would see a picture of Shantae. The franchise has consistently delivered light, low-stakes stories, and Seven Sirens is no different. All the half-genies are friendly with one another, so there is no drama to be found there. Even the question as to where they all disappeared to is light on the dramatics. It is a fun little tale, for better or worse. With the real world issues we face in 2020, it is nice to play something so carefree and fluffy. On the other hand, though, the lack of tension does make it a little hard to get fully invested. It would also be nice if the franchise focused on developing other villains outside of Risky Boots once again.

Gameplay wise, Shantae and the Seven Sirens walks on familiar ground. The Metroidvania stylings the series has used continues to be in place here. While the action kicks into gear on the main part of Paradise Island, the missing half-genies are strewn about the surrounding locations. Some of them are close to the villages they originally hailed from, while others are trapped in areas long since lost to time. As to be expected for the genre, you will often have to bounce to and from each area as you progress through the story. Places that once seemed inaccessible can eventually be traversed if you have the right skills. 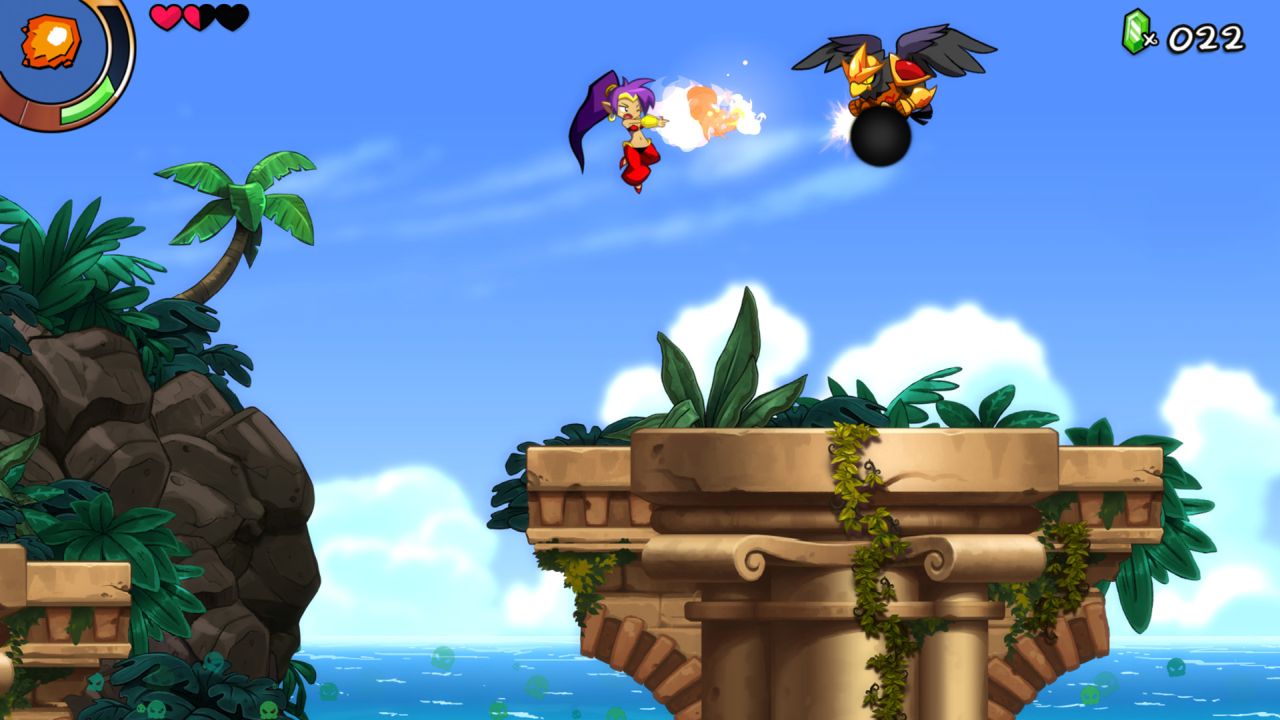 As a being with considerable power, Shantae must acquire several new abilities in order to save the day. These traits come in two different categories: Fusions and Transformations. Fusions unlock once you have started to rescue the other half-genies. Grateful for the help, and looking to chip in as well, the other girls will lend Shantae some of their strength. These function as spells that generally affect everything that happens to share the screen with you. One fusion spell will power up electronic devices, while another may resurrect dead plants. They are useful for not only dealing with enemies, but also for uncovering secrets. You can't spam these spells, though, as they are tied to a magic meter that tends to drain quickly.

Transformations will be immediately familiar for anyone who has experimented with the series in the past. Again, you acquire most of these by rescuing the capture half-genies. As with past entries from the world of Shantae, these coins let the titular heroine transform into a variety of different animals. Each one serves its own purpose and are necessary in order to fully explore Paradise Island. Transforming into a newt lets you climb onto walls, while the tortoise can smash pesky blocks.

While there is almost a comforting familiarity to Shantae and the Seven Sirens, it also kind of feels like the series is in a bit of a rut. The transformations are more or less reskins from the previous titles, and the platforming is nothing we haven't seen before. For better or worse, this feels like a very safe sequel that was afraid to mix things up on a new platform. And even considering the sub-10-hour length, it does feel like Wayforward struggled to fill the time. I mean, did we really have to face-off with Risky Boots four different times? I'm already tired of her being the villain, and this just further put the nail in the coffin. 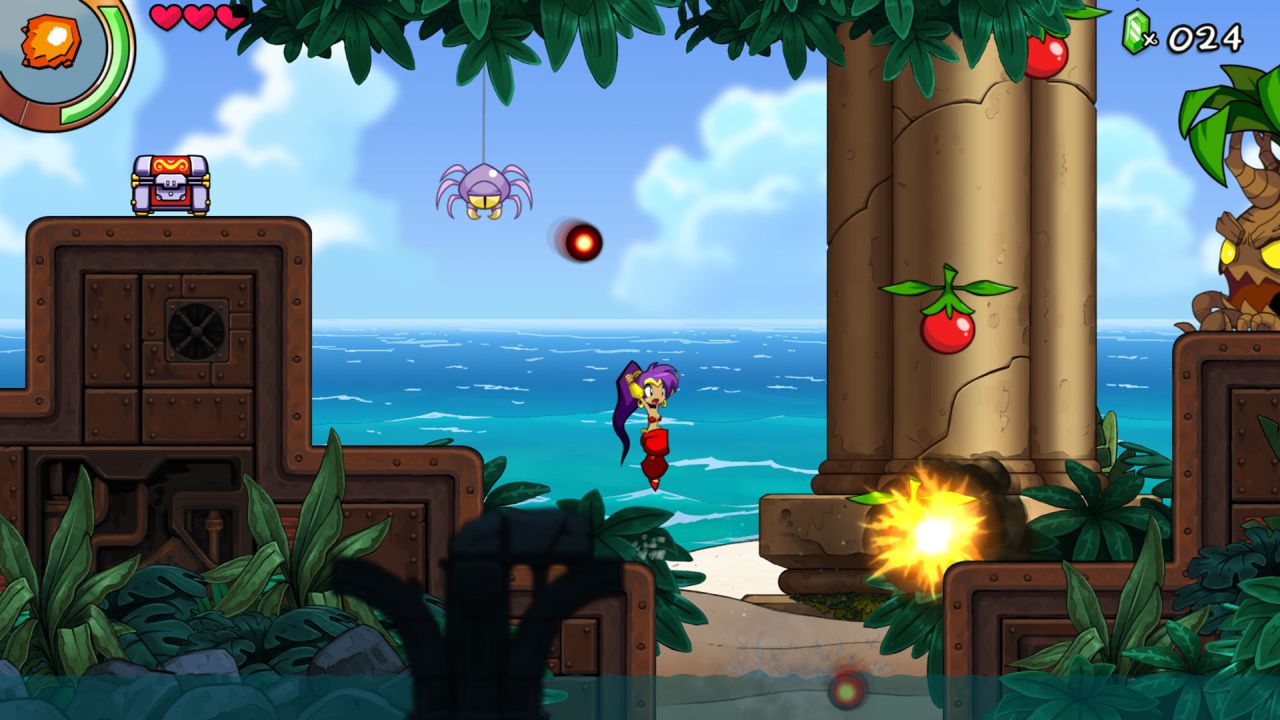 This is also probably the easiest title in the series to date. You are constantly given food and other perishables that serve as health and magic boosts. Gems constantly pour out of any and everything that gets destroyed. And with all the loot you acquire, it doesn't take long to fully upgrade your abilities from the shop. You can even further augment your abilities with a new half-baked card system. Defeated enemies will occasionally drop cards that, when equipped, upgrade Shantae's latent skills. It's fun to play with at first, but once you get certain cards, you'll never really need to experiment with the others. A nice idea, but one that doesn't seem like it was completely developed.

At least with the level of difficulty the title has, you can afford to take in the lovely visuals. Shantae has typically been one of the better looking 2D platformers, and Seven Sirens is no different. The character models, particularly for the main characters, are delightful as always. As they are mostly all half-genies, they do dip a little into cheesecake territory, but nothing too egregious. The sequel also has the benefit of featuring delightful animated cutscenes courtesy of Trigger Inc. The only issue I have is that some of the minor enemies utilize the same assets from past entries.

Shantae and the Seven Sirens is a far from a bad game, but it is a disappointing one. Instead of trying to move the franchise forward in any meaningful way, the sequel is content to tread water. It doesn't move the lore of the series forward, and the gameplay doesn't mix things up enough. It's a perfectly competent entry that will probably satisfy the die-hard fans. But if the series is going to continue for another 20 years, it's going to need to evolve.

Our ratings for Shantae and the Seven Sirens on Xbox One out of 100 (Ratings FAQ)
Presentation
80
Delightful, charming visuals continue to be a hallmark of the Shantae franchise. While I think the main character designs are great, the reuse of assets from prior entries is clearly noticeable.
Gameplay
60
Shantae and the Seven Sirens is not a bad game to play, but it does feel like the formula is starting to get stale. The platforming gets too easy, too fast, and the transformations the title uses aren't that different from what we have already seen.
Single Player
55
Little to no drama to be found, which is oddly relaxing in this day and age. However, the lore of the series still isn't fleshed out, and overreliance on the same one villain needs to be remedied soon.
Multiplayer
NR
None
Performance
80
No issues to speak of when playing the title on the base Xbox One.
Overall
68
Shantae and the Seven Sirens is an acceptable entry in a series that is known for consistency. However, as the genre continues to evolve, it feels like the simple pleasures of the franchise are becoming less enjoyable. Whenever the titular heroine returns, hopefully she has some new tricks to unleash.

Shantae and the Seven Sirens
8 images added 262 days ago