The ability of games to transport players to different worlds and experiences is always exciting. We've been spacefaring pirates, regular pirates, astronomers of both the scientific and whacky variety, war heroes, and so on. The medium also gives us a chance to explore unique creative visions, such as seeing the world through someone or something else. Maneater is not a game that will teach you much about wildlife, nor will it tell a riveting tale or provide groundbreaking gameplay – but it will let you become a chunky shark that's hungry for revenge. 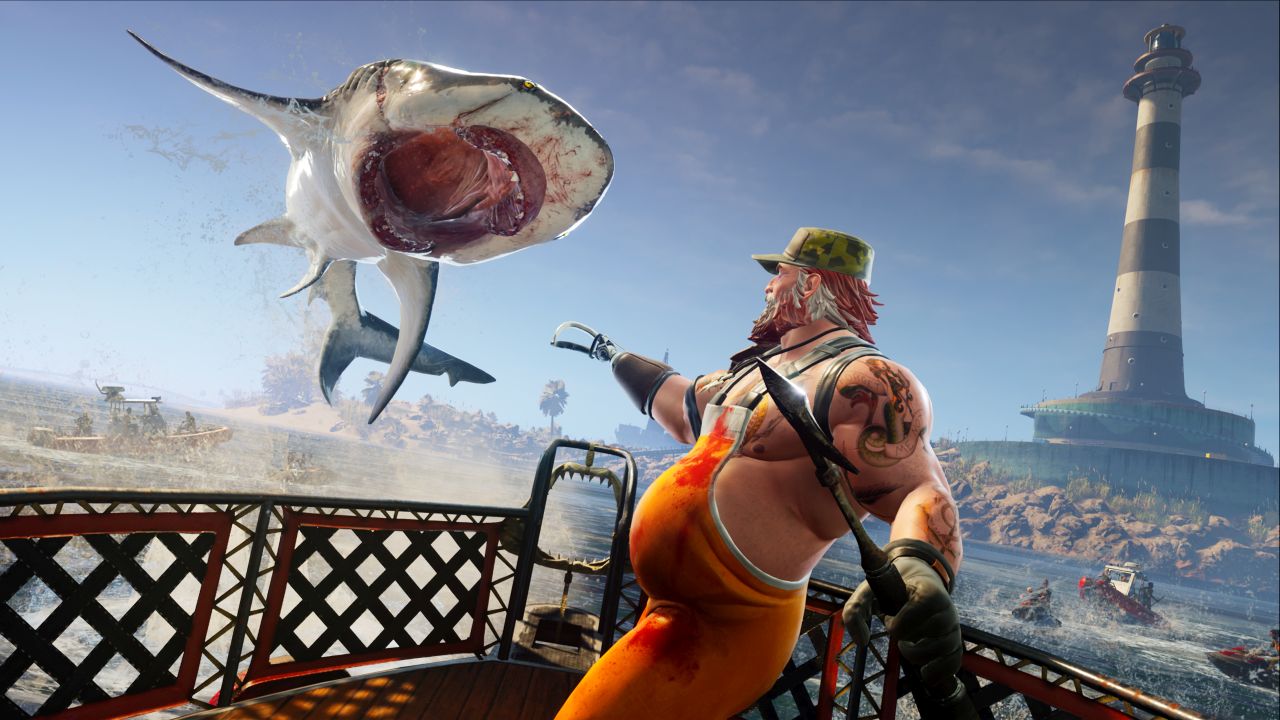 Players take control of a shark, and get to go on a quick rampage before getting captured by a hardened hunter called Pete. This man is on the search for a mega shark with his son, and as he casually kills the shark, its baby appears from within. He marks it with his knife to recognize it in the future, but it also bites off his arm, thus getting a taste for human flesh. Thus begins a journey for the young shark to grow and eventually enact its revenge.

There are a few cutscenes spread throughout the game, framed as if it's a season of one of those wild nature shows you might see on TV. The absurdity of Shark Week certainly comes to mind – but the game finds the right balance, keeping one flipper in reality and one in mayhem. The setup allows the cutscenes to be shown from the perspective of a camera crew as they follow Pete, while the gameplay has a narrator that often quips about your actions and shares random facts, some true, some outlandish. All of this manages to be pretty funny, without trying too hard.

Over the course of the campaign, players will swim through a number of fairly distinct areas around a fictitious coastal city. Players control a bull shark, which according to Wikipedia is commonly found worldwide in warm, shallow waters along coasts and in rivers. This matches with the game perfectly, as most of the areas are very shallow and takes us right up to the beaches and docks of the city. The environments are well detailed across the board, with moving cars, people, and boats; under the surface, there is garbage, seaweeds, and pipes as you might find so close to civilization. There are also a few linear submerged tunnels and caves to swim through, usually containing a quest or collectibles. Effort was certainly made to make this a believable location, both above and below the water.

The shark navigates these waters with decent speed, and the controls are very straightforward. You can also rise to the surface and knife along the water, as a shark does, which lets you observe the world above. The camera can get a bit awkward sometimes (as with most games of this nature where you can move in any direction), but your view always remains upright, so it's not a big issue. The surface swimming is "sticky", and there is a button dedicated to diving back down; you might often inadvertently get to the surface and thus have to dive back down manually. The other movement controls include a jump, a burst of speed, a dodge, and a tail whip. 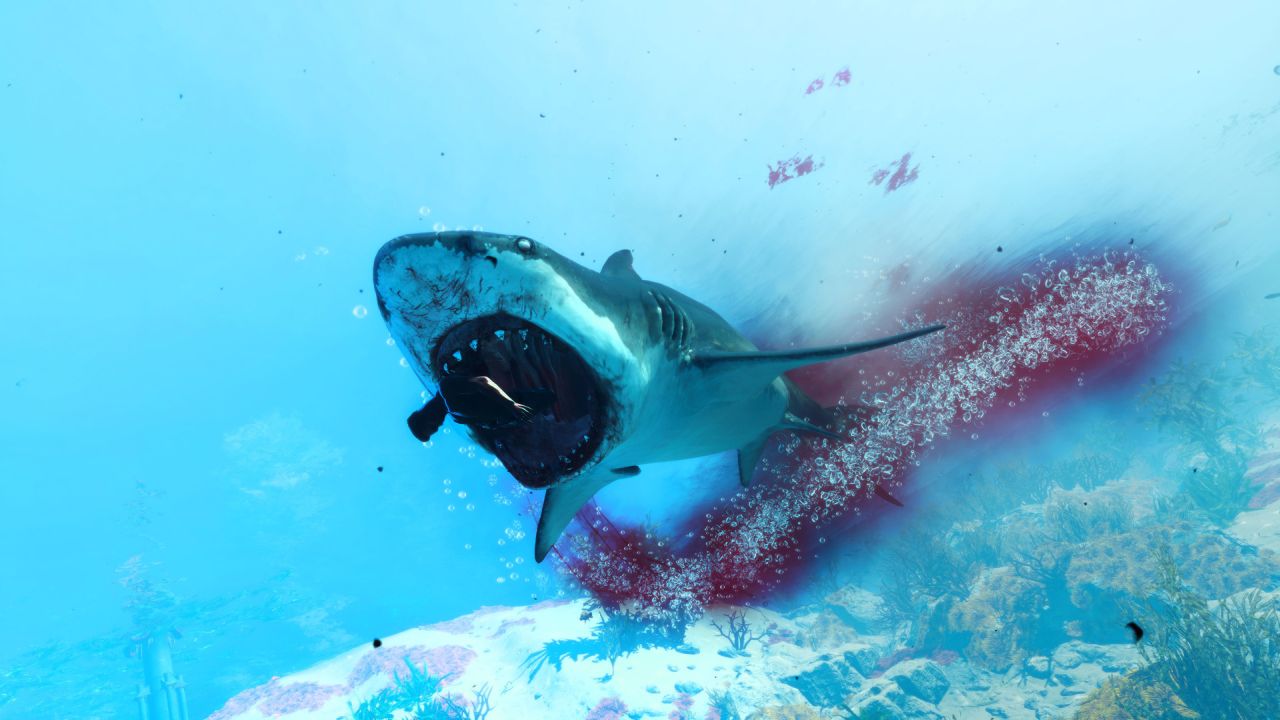 A growing shark needs to feed, and there is plenty of fish in the water. All other life forms in your vicinity are identified by their level and resource type. You simply swim up to them and chow them down with the attack button. Eating earns you experience and resources, both of which are needed to eventually grow into a real beast. The experience level, along with the story progress, dictates your main stats that include mass, damage, and defense. The materials are used to improve your abilities and equipped items. Maneater features light RPG elements where you have a few different abilities to choose from and three slots to equip them into. These abilities include a pulse scan, better mobility on land, increased health, and better resource gain from eating. Over the course of the campaign you also earn new item sets to equip on the shark's body, fins, head, and so on.

Sadly, there are just a few abilities and four item sets. The Bone item set unlocks as you progress through the story and lets you have increased defense and more damage to boats; that's all you really need to complete the game. There are also a couple of other sets, but they are earned by completing optional tasks / getting 100% of the game's activities done. Some abilities, like the above-mentioned improved movement on solid ground, aren't really necessary. It's a decent system, but just like the design of the campaign it's sort of implemented at a barebones level.

Swimming around and eating stuff would get boring quick, so the game includes a traditional quest system that tells you to eat specific things, or take out the apex predator of the area. While interesting at first, all of these mission types unfortunately repeat in each section of the map. The setting and wildlife might change, so you'll be chowing down on seals instead of small fish, but the quests do grow quite repetitive and stretch the game's limited mechanics to hours. Players can search for collectibles, and figure out how to reach some tricky ones above the water; or uncover ironic underwater locations for which you get a joke from the narrator. You will also search for protein caches, which serve as a boost to materials and experience. But as you get out to the deeper waters late in the game, where there's nothing new to do in the vastness, the limited scope of the game's interactivity becomes more obvious. 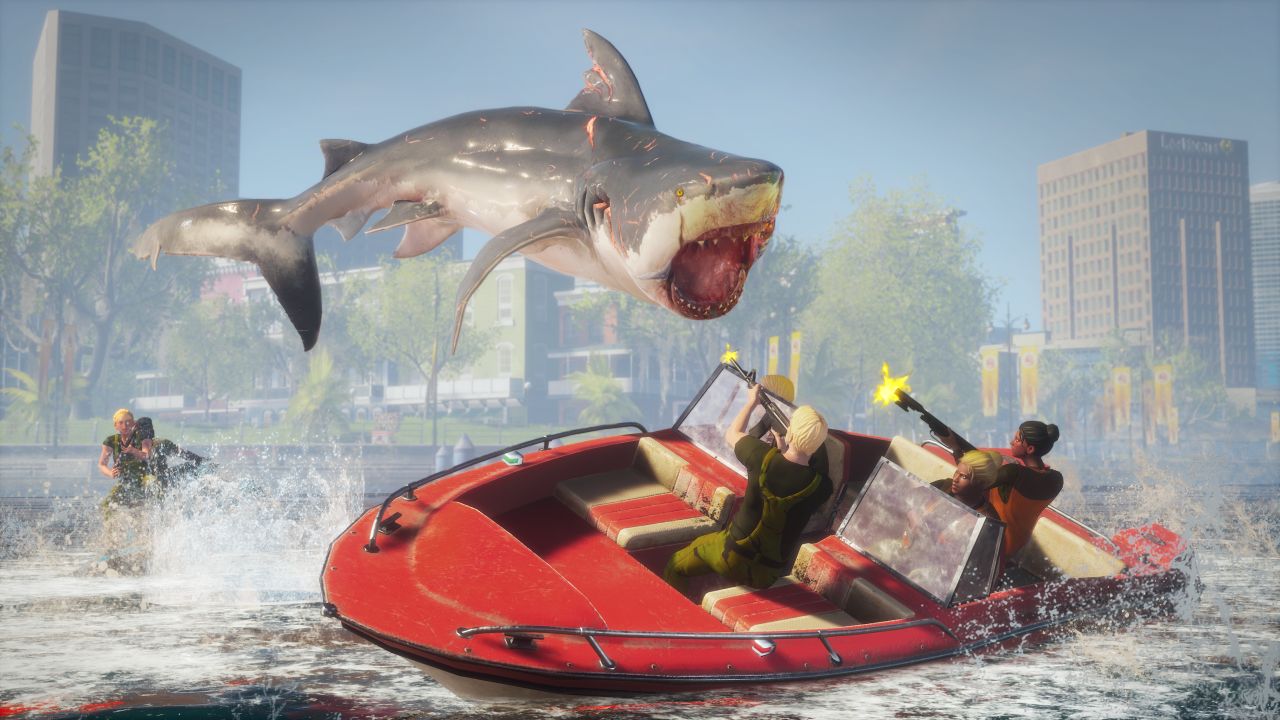 While rigid and sometimes dull, the one nice thing about this campaign design is that you leave each area with lots of experience and materials. There is never a need – beyond the starting area – to have to mindlessly eat random fish to grind the XP or resources you want. In fact, the game is pretty generous, and you should be able to max out your shark by the time the final chapter arrives.

But it's not all smooth sailing for our hero shark. Many of the creatures will be hostile to you – starting with crocodiles and eventually sharks and orcas. Combat is frequent in Maneater, and it can get a bit clunky. When attacking another creature, all you can really do is try to orient yourself towards them and chomp away. Sometimes, they will tail-whip and push you, but for the most part it's an awkward dance between two underwater combatants that's hard to animate or make realistic. The only unique mechanic is the fact that you can latch on to the enemy and thrash them around – and they can do the same to you.

Just like the campaign design becomes repetitive, so does the action. Many a time, the game becomes an outright button masher, as you try to get as many hits against the opposing big fish as possible. And even when you're simply consuming larger prey to restore health, it takes multiple bites, so you just constantly hammer on the trigger of the controller. The thrash mechanic also has you spamming the joystick side to side. You almost need a break after battle to let your hand rest; players can return to their home base Grotto in each area of the map, which doubles as a fast travel spot. The game runs at around 10 hours to complete, including all optional content, so it doesn't outstay its welcome.

But life-forms above water are not oblivious to you. On your quest to eventually meet Pete the shark hunter again, you'll have to consume lots of innocent beach goers and fishermen. There will be blood in the water, that's for sure, and snacking on people continues to be amusing throughout the game. Most won’t even be in water, so you can hilariously jump out and flop across dry land to reach your targets. The human AI doesn't really do anything – they just yell and run around, letting you have a feast before you begin suffocating and need to return to the water. The violent and yet somewhat humorous atmosphere has shades of Carmageddon from 1997, as a friend helpfully reminded me. 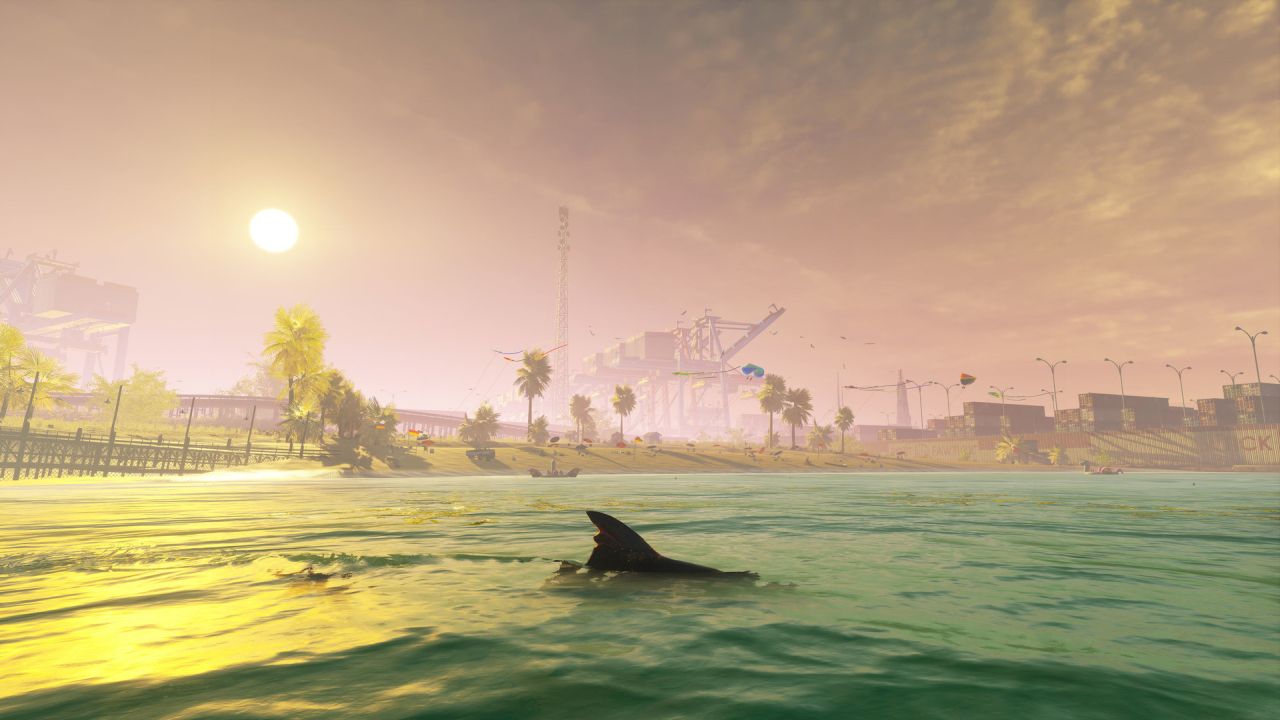 Just as under the sea, humans won't take your assaults lying down. When you've racked up enough victims, hunters get dispatched to deal with you. They arrive via boats and carry assault files, dynamite, and sometimes even scuba gear. They need a few moments to lock on, but they hit often and hard, so staying on the move is important. You can attack their boats, or more effectively, jump over as you grab the gunners right off the deck. It gets quite messy and intense, but it's also satisfying, especially later in the game when you have lots more health – but the enemy boats become more dangerous too. The game utilizes an Infamy rank system, which increases after you've defeated enough hunters. Each rank brings more firepower to future hunter boats, and draws out a boss. But this character is just like any other, and disappointingly offers no resistance or change in mechanics.

The atmosphere of Maneater is helped along by solid voice acting and good visuals. As mentioned, the environments are detailed, and they also look sharp and quite colorful in places, like some of the caves, as well as the lights of the city at night. The game has a day/night cycle, helping add even more liveliness to the world. The Unreal engine does well to make the game look good and run smoothly, though there were occasional random stutters, and the draw distance leaves something to be desired in the game's deepest waters (all of this on maximum settings). Enemies also have no qualms about spawning out of thin air, but you don’t notice it too much. It was also noted that the game had a few strange issues navigating/exiting the options menu, and saving your settings.

Maneater is a game that turns out to be more fun than the sum of its parts. The campaign design is very rigid and uninspired, and the button-mashing gameplay can get quite repetitive. And yet the experience continues to amuse, thanks to the sheer originality of the concept, some decent mechanics, and solid atmosphere that's both funny and violent. It has a simple foundation that works, but it just needed a little more - more polish here, a little more complexity there - to really round out the experience. Maneater might not end up winning any awards, but it can be surprisingly fun, and will catch some unsuspecting players hook, line, and sinker.

Our ratings for Maneater on PC out of 100 (Ratings FAQ)
Presentation
78
The colorful and detailed game world is enticing to explore, and the amusing commentary works.
Gameplay
74
On the one hand, the game is repetitive in its design and mechanics. But at the same time, it continues to be amusing to snack on people and fish alike, even hours in.
Single Player
65
There's only so many things a shark can do without totally breaking some resemblance of reality, but still the mission design could have been a bit more expanded.
Multiplayer
NR
None
Performance
(Show PC Specs)
CPU: Intel Core i5-4670K @ 3.80 GHz
GPU: ASUS Radeon RX 580 8GB
RAM: 16GB DDR3
OS: Windows 7 Professional 64-bit

75
Runs fine for the most part, but has a few hiccups here and there.
Overall
74
Despite a fair amount of repetition and simple design, Maneater offers a surprisingly fun atmosphere with lots of bloody action to sink your teeth into.

All videos for Maneater (3)
Advertisement ▼