A vicious take on a classic genre

As one of the millions currently stuck in quarantine, I've been spending my time watching just about anything I can find available. One of these options has been 1980's vigilante franchise Death Wish. Charles Bronson's nihilistic series is an over the top, brutal adventure in vigilante justice. It's almost serendipitous that Huntdown would show up shortly after I finished the entirety of the series. While the basic premises may be different, the tone and violence of the two properties share similar blood. 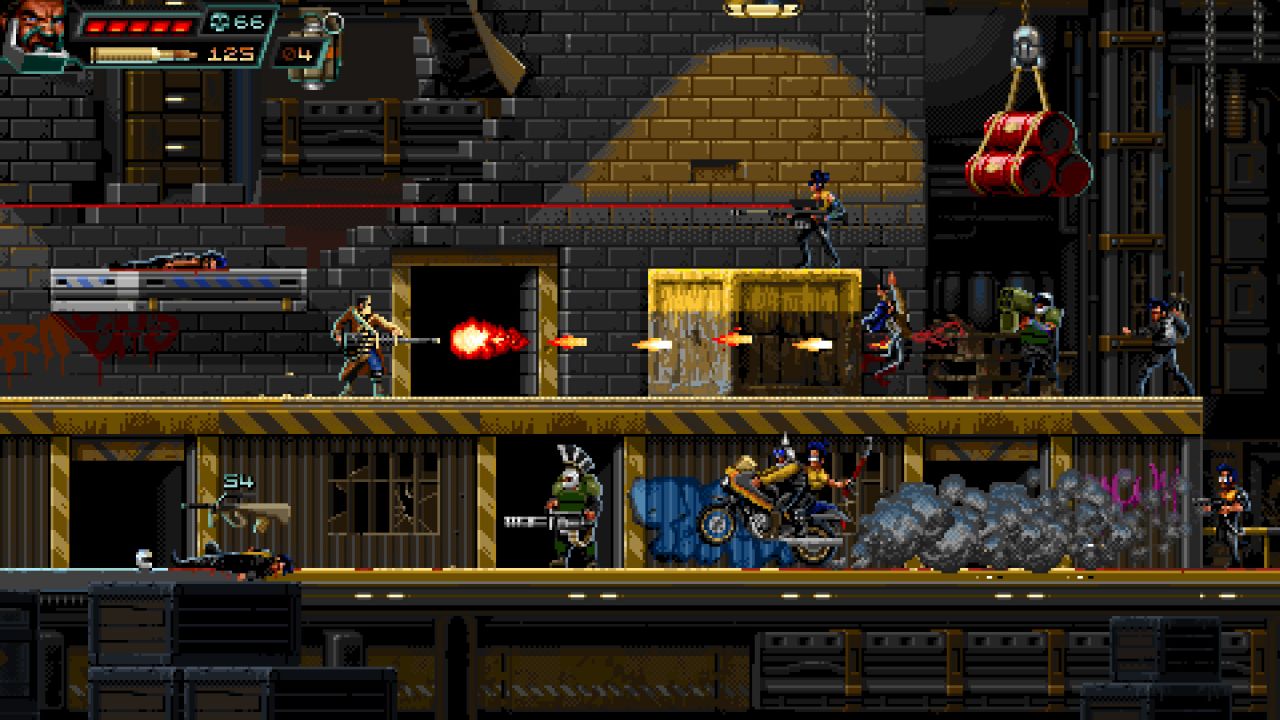 In some undetermined time in the future, the world has been driven into post-apocalyptic mayhem. Gangs and killers own the streets, and the civilians caught in between can do little to alleviate the problems. With the police almost as corrupt as the criminals, the job of cleaning up the city falls onto the capable shoulders of bounty hunters. The three hunters for the job, Anna Conda, John Sawyer and Mow Man, may only be in it for the cash, but they're the best this city is going to get.

Like the action movies it draws inspiration from, there's not a ton of narrative to be found in Huntdown. The set-up is little more than being told which specific gang you'll be going after for a portion of the game. That's really all the plot development the title necessitates, though, thanks to some solid characterization. The three contract killers all have their own unique traits, and their rapport with the agency that hired them is defined well enough. Each of the four gangs also have their own special attributes. You don't spend a ton of time getting to know them, but the big baddies of each tribe are well designed and different from one another.

At a glance, Huntdown is immediately reminiscent of the classic Contra franchise. It's a side-scrolling shooter that throws dozens of enemies at you at a time. You may be able to survive more than one shot, but if you're not quick on your feet, you'll be taken out fast. Each of the three hunters has their own basic firearm, but enemies drop better weapons upon death for you to pick up. The most common ones being assault rifles and shotguns, but stronger weapons such as grenade launchers and hand-to-hand tools like katanas drop as well. Additionally, each character also has a side attack they can use that's on a charging meter. These can also be supplemented with side pick-ups such as grenades and Molotov cocktails.

What separates this effort from its predecessors, though, is the use of a cover system. With broken down cars and seedy back alleys littering the streets, there are plenty of opportunities for you to take cover. And while it won't shield you from everything, as explosions and hand-to-hand attacks can still get through, it will save your hide. Enemies can make use of these hiding spots as well, so battles sometimes evolve into a challenge of skill and timing. Knowing when to pop out and fire another round often proves to be critical. 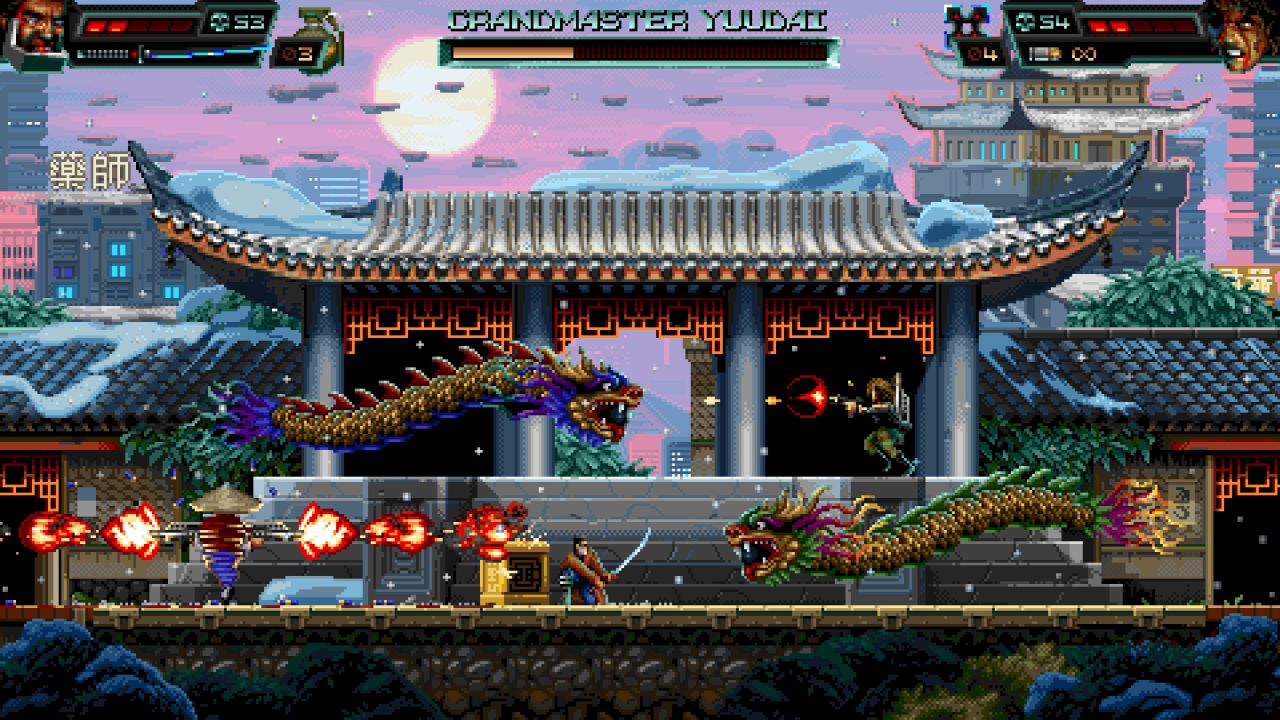 Even on the lowest difficulties, finding cover is important. The enemies you come across start off weak, but gradually become more and more difficult to take down. Huntdown is split into four different areas, with one gang taking up shop in each. The grunts that litter each level are typically built around that one gang's gimmick. For example, one group is heavily influenced by greaser chic, so expect a lot of leather jackets and motorcycles. Each gang is ruled by one ruthless leader, but the upper management members need to be taken out too. These more gimmick heavy battles cap off each level with a flourish.

Despite looking like a total throwback, Huntdown works because it is far more than just a simple sidescroller. It's a ridiculous, over-the-top action thrill ride that forces you to not only think strategically, but more importantly, fast too. The boss battles are perhaps the best example of the hidden depth the title possesses. Whether it be from how the arena is laid out, or how the enemy chooses to attack, these encounters force you to deviate from your usual strategies. They make you approach each battle from a new perspective, and it doesn't feel cheap or gimmicky, either. They can certainly be frustrating, but the feeling of personal satisfaction you get upon taking out one of these characters is top-level.

Although Huntdown does have more gameplay depth than most retro-inspired shooters, it does suffer from a similar problem, which is the fact that it's short. There are about 20 levels altogether in the game, and most of them can be clocked in less than 10 minutes. The title is seemingly built for speed running, so I can see that drawing players back into the game after completing it. You can also fully complete each level by achieving three different goals: killing a specific number of guys, finding all three hidden briefcases, and not dying. There's also a co-op component, but it lacks online play. As I am locked up with someone who does not play games, I have been unable to test out this feature yet.

Huntdown does an excellent job of nailing the 16-bit visuals of the early-to-mid 1990 consoles. The character sprites are big and full of personality. I love the designs of the three main bounty hunters. They are completely ridiculous, but totally in line with the title's personality. The grunt designs are solid as well, but I do think some of them get overused over the course of the campaign. And in line with how they play out, the look of the bosses is all appropriately unique. Really excellent artwork all around. The sound design reminds me a lot of the Sega Genesis as well. Moody, electronic backing tracks that sound like they could have been done on the Genesis' Yamaha synth chip. 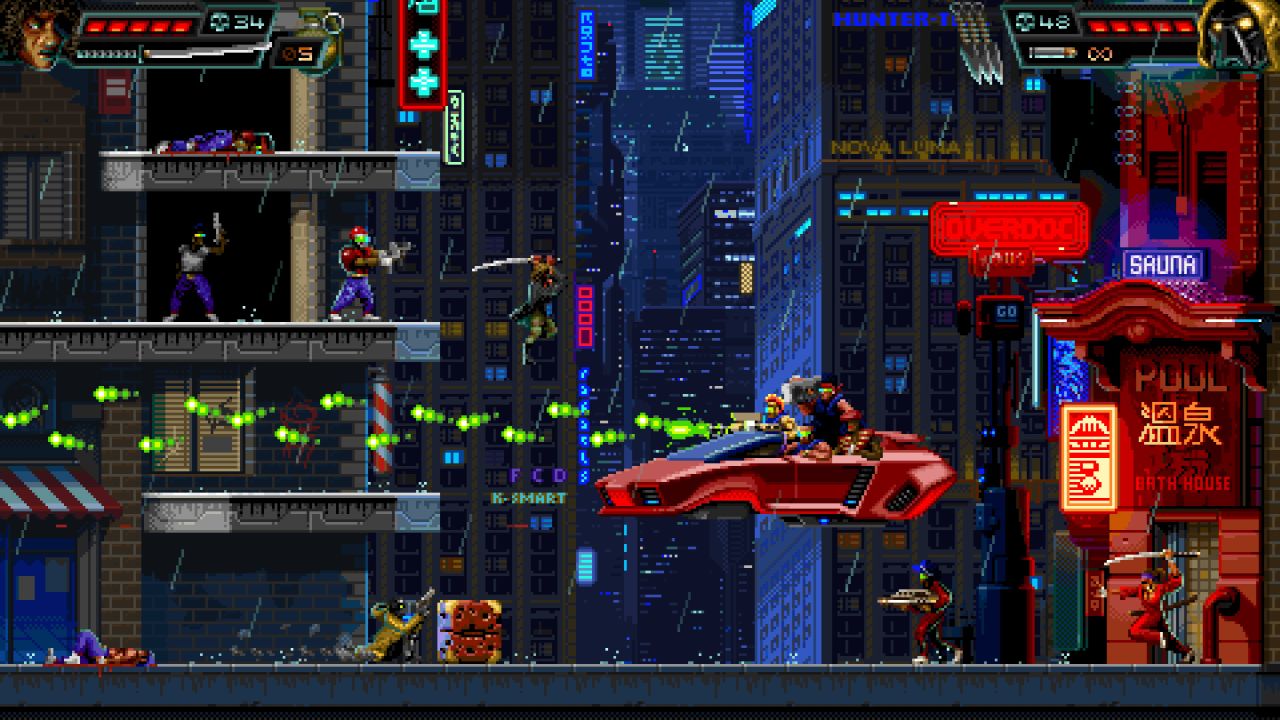 Prior to its launch, I knew very little about both Huntdown and developer Easy Trigger Games. However, after spending a good amount of time cleaning up crime, I can safely say that any expectations I had were blown away. The sidescroller is a frenetic, action-packed adventure that provides a tough challenge, but never feels too overwhelming. While I would have appreciated additional content, either in the form of more levels or further plot development, there's no denying that what's here is top-shelf entertainment.

Our ratings for Huntdown on Xbox One out of 100 (Ratings FAQ)
Presentation
84
Excellent 16-bit visuals that immediately conjure up feelings of nostalgia. The post-apocalyptic world of the title is excellently crafted, and the character design is memorable. The satisfying electronic soundtrack perfectly matches the tone of the title.
Gameplay
85
Tight controls make sliding, jumping and hiding behind cover a total breeze. Which is much appreciated as the punishing pace of the action always requires you to be on your guard.
Single Player
74
Huntdown's personality shines when it focuses on the trio of bounty hunters and their prey. However, the world of the title is given little backstory, and the short length of the campaign may turn players off.
Multiplayer
NR
There is a multiplayer mode found in Huntdown, however due to the fact there's only couch co-op available, I have been unable to test it at this time.
Performance
85
No performance issues to be found while playing on a base Xbox One.
Overall
82
Huntdown is a blistering and blood-soaked adventure that may look retro but feels remarkably modern. The title takes the basic formula of the sidescroller and tweaks it with notable improvements such as a cover system and boss battles that require more than just brawn. The genre may be flooded with similar romps, but Easy Trigger Games' effort stands out. 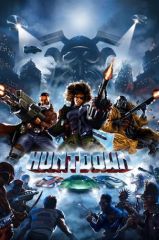