An emotionally gripping journey through the streets

Who'd have thought a game so thematically dismal can also be so enticing? Enter CHANGE: A Homeless Survival Experience, from UK studio Delve Interactive. As you might have guessed from the title, almost every minute of this 2-3 hour stint hits you with somber, tough, and often frustrating trials. The game seeks to authentically convey the homeless experience - and for the most part, it succeeds. It captivates with appealing, grind-it-out gameplay that verges on depressing. And yet, it was these unique traits that allowed this rich experience to shine and keep me enticed. Tinges of repetition aside, CHANGE makes for a surprisingly addictive survival romp - and one that really left an impression. It's an inventive roguelike that's just as eye-openingly educational as it is enjoyable. 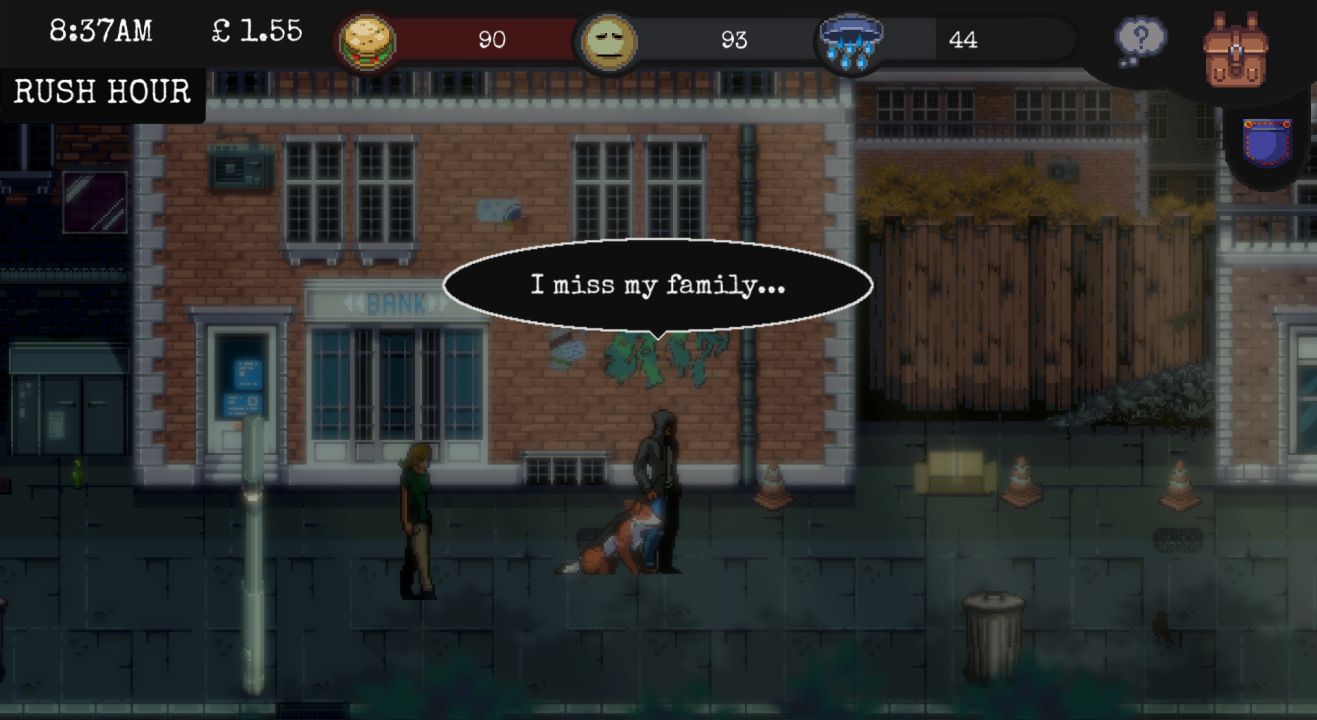 As is largely the case for real homelessness, CHANGE is wrought with a slew of randomized elements partly outside one's control. The one-and-done campaign, rife with shifting dynamics and constant curveballs offers a tense, yet gripping experience. This roguelike style fits the subject matter like a glove - adding to its sense of gritty realism despite the pixel art aesthetic. These unanticipated blows can border on unfair and cheap at times, though it makes every minor victory all the more satisfying.

The game uses procedurally generated areas, navigated in a 2D space via intuitive point-and-click controls. There are bouts where you may run into a clutter of objects only to click the wrong thing, but it's usually a smooth, simple process. The interface and menu screens are also clear and easy to handle for the most part. Left and right navigation by way of the arrow keys, clicking, or "WASD" all prove sharp and seamless.

When starting a game, you can choose between a handful of characters, each with their own conditions. Initially, you're forced to start with the poverty-stricken character who's given naught but a little pocket change. Once certain conditions have been met though, you can gain access to other characters, too. This includes the "Veteran," who begins with more cash, as well as one laced with addiction maladies and cigarettes that raise happiness. Once you're dropped into the streets, you'll be forced to scrape by in any way possible.

In the early phases, this mainly boils down to begging for change, searching trash cans for food scraps, and sleeping on benches and in shelters. You can also gather recycle scrap on the ground to hand in for a bit of cash. Strap yourselves in, as it only gets more glum from here. As is the case with other feats allowing you to progress, begging will yield mixed results largely contingent on your overall wellness. This boils down to a few key components - hunger, hygiene, and happiness. The latter is particularly crucial, as a happiness meter draining to 0 means it's game over. Low hunger will mean slower walking and a general lack of productivity, while poor hygiene will repel you from others - just like real life!

In addition to these three "H's" you can also build up a "study" level which is driven by how much you study at libraries or read books. Finally, your notoriety with police and social standing with other homeless people are measured. In essence, the experience is a constant balancing act between these 6 factors, most of which deteriorate over time. CHANGE can feel like an uphill battle in this respect, though you might say that this is, in fact, the point - and a message Delve so greatly conveys. 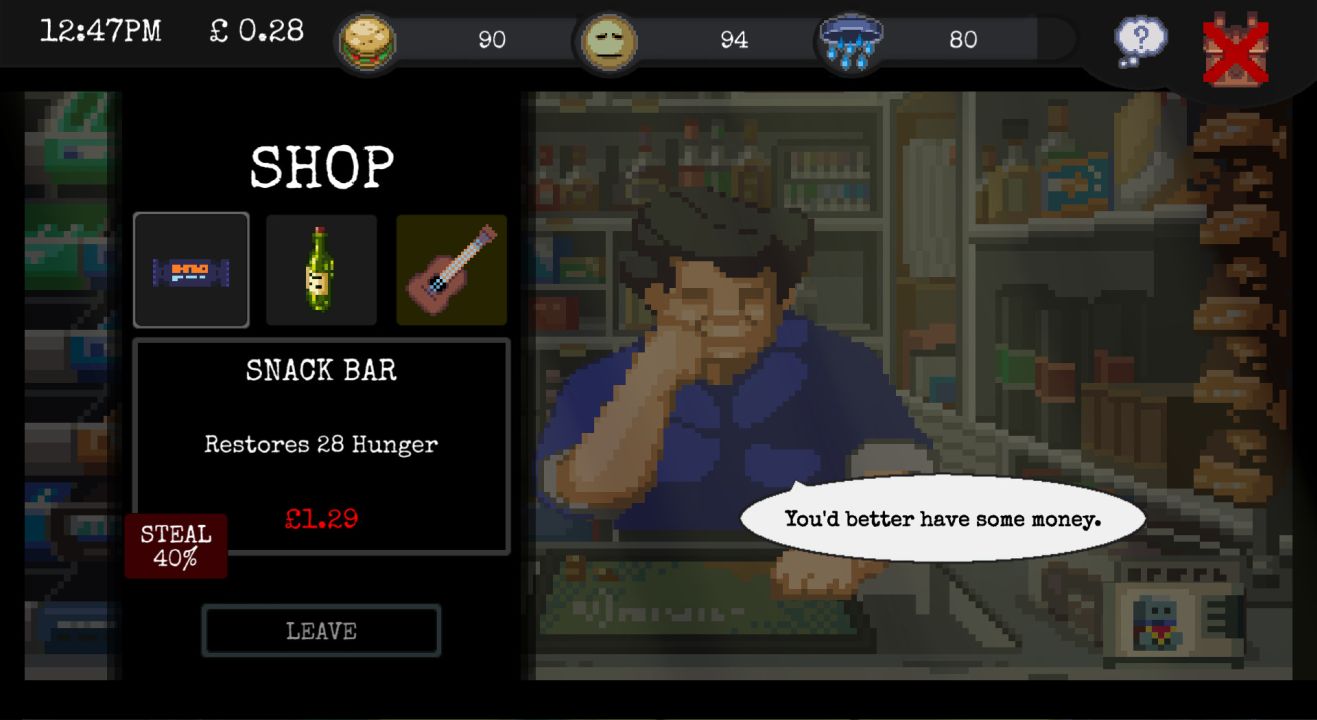 The hours tick by rather quick, and sauntering around for just a few minutes will comprise most of the day in the game's internal clock. At 9pm, things come to a halt and you'll have to sleep until the next morning. Once you've gathered a decent amount of change and food, you'll want to visit shops, along with food stands which can provide discounted morsels.

As mentioned, money can be had through passersby, though success rates are dicey, and you risk pride-diminishing insults. Trips to the bathroom and laundromat to wash up can help on this front. Study sessions in the library will allow you to eventually land a (basic) job, as well as grant shelter in the winter. Yes, CHANGE also has dynamic weather, complete with snowy winters and rain. This creates even more challenge, as you'll need to seek warmth while juggling the usual tasks.

Landing a job is one of the primary goals in the game. You'll need to be sure to report to one of the employment offices when getting one, at which point you'll spend the day working and earning a few extra bucks. Getting a job and keeping it aren't easy tasks. I managed to get fired for a myriad of reasons ranging from low happiness levels to poor hygiene. Indeed, hitting this crucial stepping-stone can feel excessively tough at times. Still, it's worth the effort, as a couple of weeks working should provide you ample funds to secure a residency and ensuing victory.

Once you've found a groove, you can establish a routine to gather more cash, improve wellness, and stock up on items to aid in survival. The game can feel a touch monotonous here, though countless random factors keep things interesting. It's a satisfying feat if you do manage to overcome this whirlwind of elements and secure a home. Still, even inevitable defeats can grant a sense of progression. This is because at the end of each run, you'll earn cumulative XP that unlocks new items that can be found in future games.

These items are worth highlighting, as they're a crucial part of CHANGE's fluid nature. Along with food that gives degrees of satiation, you can also stumble upon goods like warming clothes, illness-curing pills, hand sanitizer, and even lotto tickets. They can be bought, though they may also be found at parks, trash cans, or obtained through social connections. You can even steal, though this is a high-risk, low-reward action that I wouldn't recommend. It can land you in jail or force you into a new area. 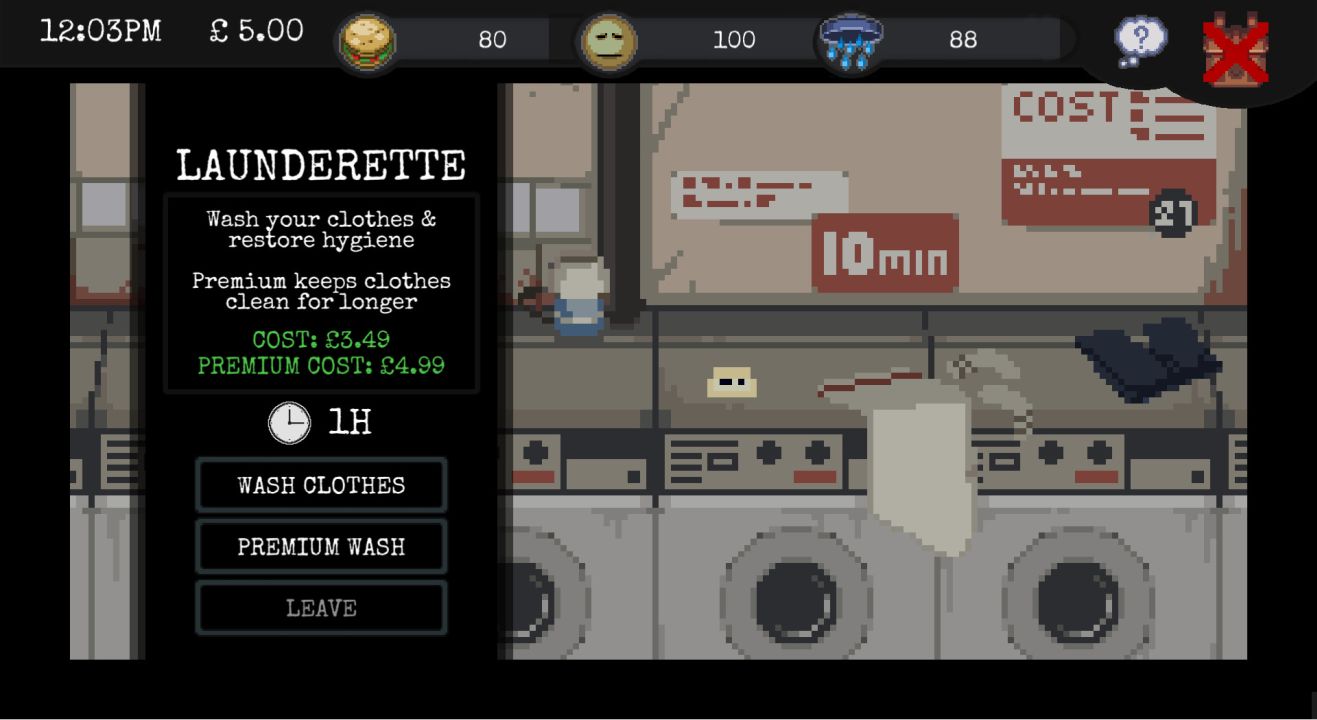 These randomized elements extend to the layout of the maps themselves, as well as the end-of-day events while sleeping. These aspects of the game can be brutal, as oftentimes you'll be dealt a rough hand that sets you back greatly. You might utterly struggle to find a building you desperately need, for instance. You may just miss the curfew of the shelter and be forced to sleep outside, usually yielding bad results. Thus, a wise decision is to settle on a single area with optimal buildings and set camp there most of the journey. During each night at a shelter or in the streets, players are prompted with a random event conveyed through text blurbs. This is where the semblance of CHANGE's story elements come into play.

Overnights will occasionally yield positive events that coax a happiness boost. But frustratingly, these end-of-day scenes tend to bring negative effects more often than not. You might witness an event that depresses you, find yourself mugged while sleeping, or have food eaten by rodents. These bouts take on the style of brief text-based adventures, as you may be forced to make a decision with text prompts. At one point, I had spent 2 hours amassing nearly enough cash to get a residence, only to get robbed at my shelter through little fault of my own. This forced me to regroup and set me back another hour. The game does feel a touch imbalanced when it comes to these nightly occurrences.

Overall, though, CHANGE's structure of interweaving elements and juggling tasks is clever and well-crafted, keeping you busy while rarely feeling too overwhelming. It's a grind to be sure, but it's one that entices you to overcome, and meet the challenges each day brings. Should you focus on studying for the day, even if you end up running out of food? Should you venture into the park and socialize at the risk of being late for work? Maybe pay a visit to the bar to drink away your sorrows - risking a devastating alcohol addiction? These are the pressing questions you'll be weighing throughout this rough journey.

Delve Interactive does a fine job in presenting a game that's both entertaining and educating. It's a vivid picture of what the typical day of a homeless person entails and how it feels. They achieve this in a way that doesn't feel hyperbolic or preachy - neither does it ring cheap, exploitative, or undermine the issue. Not only is this a terrific means to raise awareness, but the developers take this one step further by donating 20% of the profits to causes related to the homeless. With this rich, emotional overlay, coupled with some deep, appealing mechanics, CHANGE is enthralling survival experience from start to finish.

Our ratings for Change: A Homeless Survival Experience on PC out of 100 (Ratings FAQ)
Presentation
78
While nothing groundbreaking, the retro pixel art and melancholy piano tunes compliment the gameplay nicely.
Gameplay
79
The abundance of roguelike elements make for a fun challenge that keeps things feeling fresh. Though they can border on unfair at times, they're usually surmountable, and make victory all the more satisfying.
Single Player
82
Despite a minimal narrative, this is an atmospheric, emotional journey that tugs at your heartstrings. The feeling of dread is palpable when finding yourself stranded and hungry in the freezing cold or being turned down and insulted by passersby. Dynamic gameplay, random elements, and unlockables provide tons of replay value.
Multiplayer
NR
None
Performance
70
Occasional startup issues, but virtually no technical blemishes once the game began.
Overall
80
CHANGE is an interesting survival indie that's both enjoyable and thematically relevant. Its grim undertones set the stage for a memorable experience, strengthened by solid mechanics and rewarding gameplay. 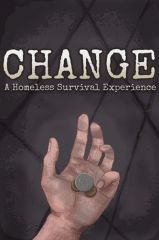