The 2017 management game 911 Operator put players into the stressful shoes of a shift emergency center worker. Players tried their best to answer calls by dispatching emergency services to where they were needed the most, and the soonest. The game had a decent gameplay loop, but it struggled with repetition, and trying to blend the seriousness of real world situations with very arcade gameplay that relies on unit management. The newly released sequel 112 Operator hopes to improve on those issues, but just like the name, it simply ends up being a very similar experience in a different setting. 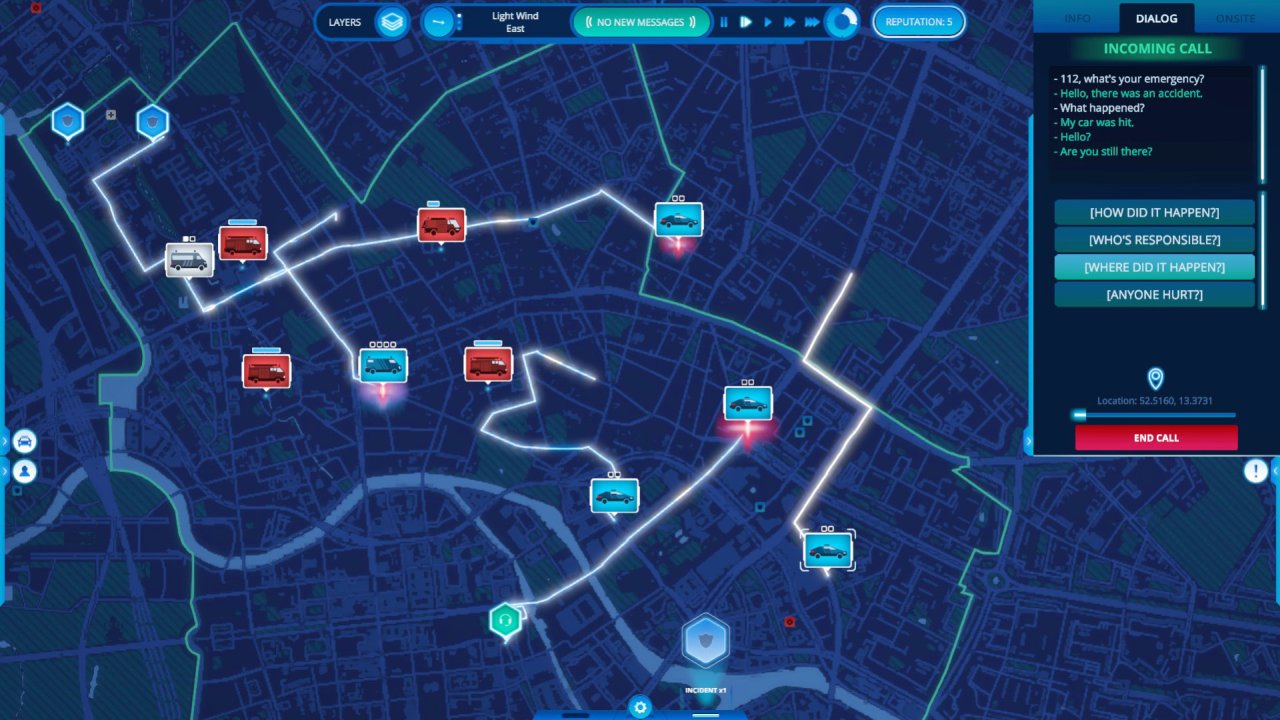 112 Operator takes players to Europe, where you are once again put in charge of an emergency control center. The campaign lets you select from one of the major cities, and in Free Play you can choose almost any city, but the gameplay experience doesn't change at all apart from the map. It may be neat to see a location you’re familiar with, like your own city (even if it's outside of Europe), and some real addresses come up in the emergency calls, but it’s just randomized locations that have little impact on how you do things.

In the campaign, you get a few major cities to play in, that gradually open up with each shift. You can choose the difficulty, which determines how many calls you get and how harsh the reputation penalties are for failure. Compared to the previous game, the campaign tries to expand its mechanics by adding a brief intro cutscene, lots of emails, as well as dramatic storylines across your tenure, such as being aware of a killer on the loose in the city. But most of it is just fluff that is largely uninteresting. Regardless of what city you pick in the campaign, the vast majority of scenarios will be exactly the same, so it seems like artificial content padding. Even though we're in Europe, playing in English results in the same cutscenes, dialog, emails and situations regardless of what country you pick, as if you're still in America.

The mechanics remain entirely the same in this new entry. Your job during each shift is to manage a variety of first responder units – police, fire, and medical – and send them across a 2D map to where they are needed. Each icon is an emergency situation – from someone having a heart attack, a robbery in progress, a traffic violation, or a cat stuck in a tree. Even on normal difficulty, the amount of calls that appear each shift can easily overwhelm, so you'll have to pause time often and ensure all calls are being attended to. Then, you resume time again and wait for your units to drive to their destinations, resolve it, and if needed bring people back to hospitals/jails. Fire trucks must return to the depot to refill their water. This takes time, so you speed it up in order to get things done and feel like you're making progress. In later campaign stages, you end up in a loop of constantly pausing and fast forwarding time in order to both make progress and not be completely overwhelmed. The game never finds a good pace in its more difficult stages. 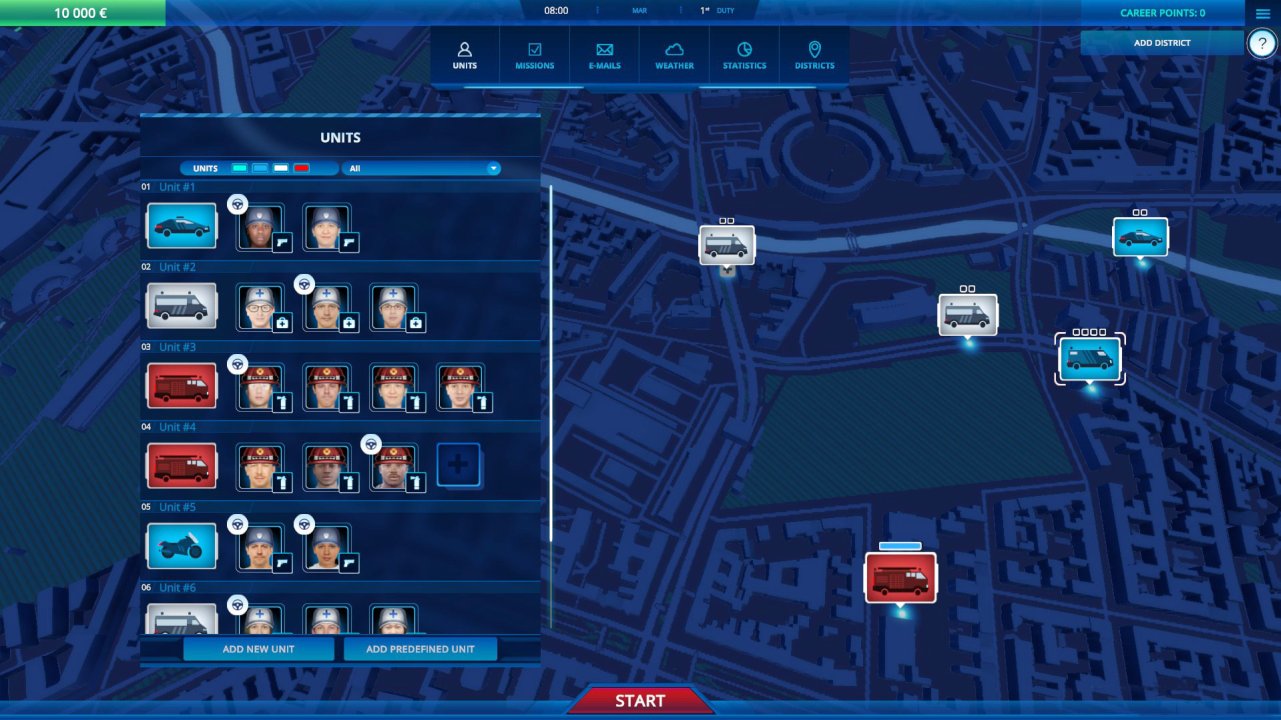 The types of calls you get vary depending on time of day and weather. Natural disasters can occur, summer time can bring heat waves, blackouts, and more medical/fire calls. Traffic congestion can slow your units, and a new fire mechanic requires you to prevent a large blaze from getting out of control. Each call you attend has a quick visualization of what's happening – a very basic drawing of your units performing an action. It's sort of pointless and non-interactive, and you'll never have the time to look anyway.

Between shifts, you have to manage your units and prepare for the next shift. You earn money with each completed shift, and can spend it on new units and staff. The menus are still very awkward to navigate here, as you try to sort through the available units, or add more. There are numerous car types for each emergency department, and they have key aspects such as staff carrying capacity, client capacity, and speed. Police and Medic motorcycles, as well as choppers, are quicker but they can only resolve problems on the spot, and not take anyone to jail/hospital (which is needed in most cases). Off-road buggies help the fire department get to rural locations faster, and police horses/bikes ignore any traffic congestion slowdowns.

But all of these unique units feel superfluous. At the end of the day, due to the overwhelming amount of incidents, you are always going to send your closest unit to the scene. There is no point waiting for a better suited unit to get to the scene, because the game doesn't say how long until a certain call is lost because the patient dies or the fire consumes the building. You send whoever you can, as fast as you can. As such, the typical units – police cars/vans, fire trucks, ambulances – are the best way to setup your roster. And as mentioned, most incidents require patient transport, making most of those extra vehicle types uselessly tied up, waiting for another vehicle to arrive and actually take action. 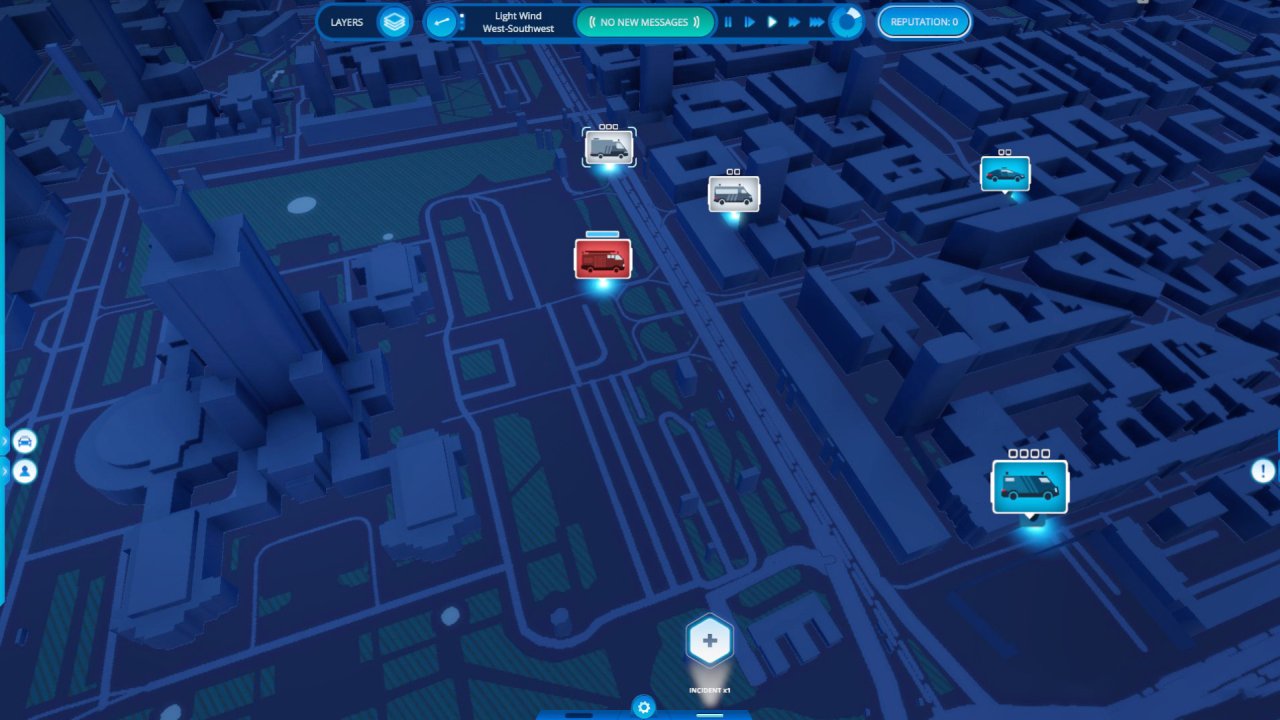 The same goes for staff; they have their skill sets, you can outfit them with individual equipment items, such as riot shields for police and mechanical tools for firefighters. But in the heat of the moment, there is no time to sort any of this out. That's why it's best to just have variety of staff spread across the different vehicles. You can also hire some new unit types like dogs, but again, a robber is not going to wait for your K9 unit to drive across town. Managing staff and their equipment is still cumbersome – never mind trying to figure out who is where during a shift. You can also hire AI dispatchers now that try to do your job and help you manage calls/units in a certain area, but their logic is very poor and so not worth using.

This is still not a franchise for completionists – the amount of calls received per shift is impossible to cover with the units you have. This is apparently by design, so an 85-95% incident resolution rate is the best you can hope for. The idea is that players must prioritize what constitutes an actual emergency based on the text description of the situation. Each incident you ignore is a hit to your reputation, and you must maintain a positive standing in order to progress in the campaign. Even if you perform at peak efficiency (over 90%), you still only make enough money to purchase one, maybe two additional units for the next shift, as even more calls come in. So it's mechanically impossible to be able to deal with every situation, regardless of how far along in the campaign you are.

When you’re not just clicking to send your units to icons on the map, you get to answer some phone calls. Just as in the last game, you'll get some voiced callers telling you about an emergency, and you choose from various conversation options to get the info you need. Sometimes you can save a life by talking a person off of a ledge, or telling someone how to perform CPR; at other times you have to nicely tell grandma that this is not tech support. Some of the voice acting and background audio effects are decent and make for a believable conversation, that can be a little immersive.

The voice calls are varied – but there are only enough of them for one or two playthoughts. Much like the previous game, the issue of repetition sets in very quickly. Some of them also don't make much sense – you should be able to quickly hang up on the old lady who misdialed by accident, or a person who complains about a restaurant over-charging her for food. But doing so damages your reputation. It's also a bit nonsensical to have you solving crimes or mysteries that police should be investigating.

As such, 112 Operator is constantly torn between trying to be a game (with scores, objectives, and fun) and being a simulator of something real. It never finds the right balance. All you're doing is clicking on icons and waiting for your units to get there and back; you are expected to fail and not resolve all calls in any given shift because you're short of units. That's not fun. It's also not fun picking a wrong arbitrary dialogue option and hear someone shoot themselves, or run into a burning building against your orders. The game inserts these jarring situations into a simplistic arcade game. It just doesn't gel. 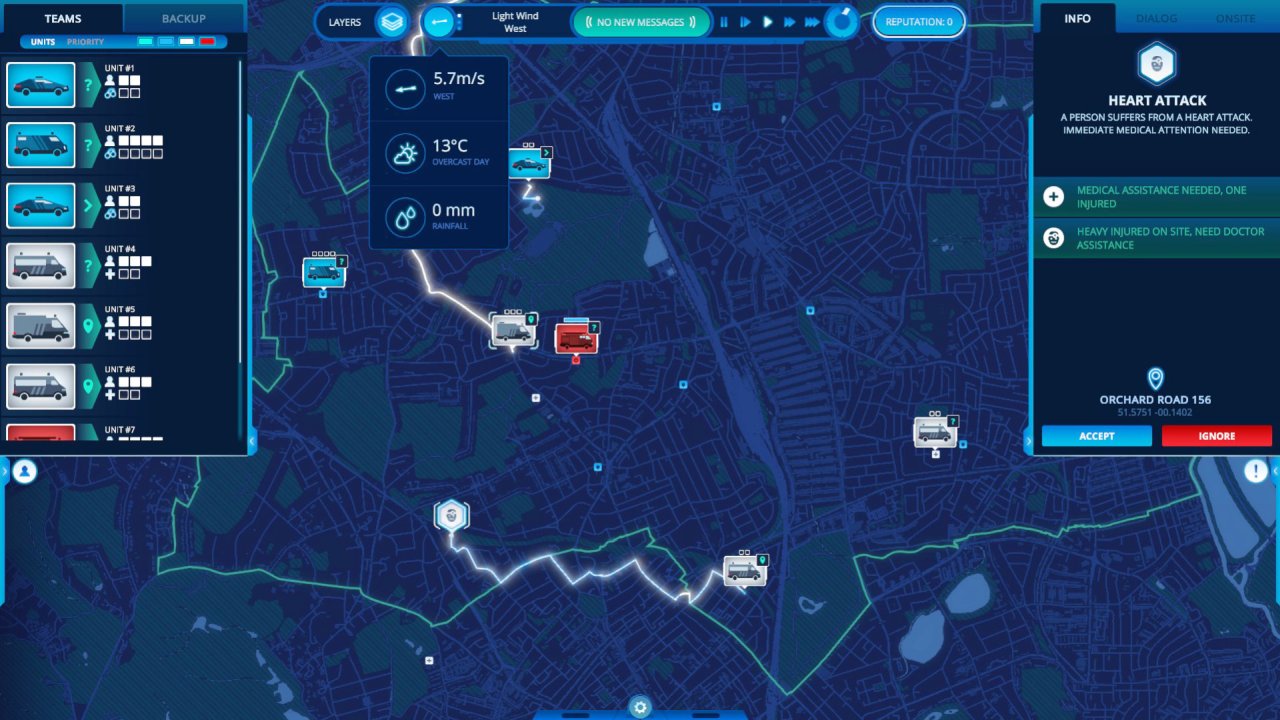 The visuals and audio design are largely unchanged. You will hear a few extremely repetitive clips of random police chatter in the background, and the visuals are pretty much the same as the last game. The voice acting is decent, but as mentioned it's all the same no matter what city you pick. The game isn't overly demanding on PC hardware, and runs stable.

Players familiar with 911 Operator will likely find many of these issues and mechanics relatable, and that's because by and large 112 Operator feels like an expansion, or an alternate version, of that original title. It doesn't have the luxury of being the first in the series, so giving it the benefit of the doubt is no longer viable. There are a few new mechanics here and there, and some UI elements are different, but the experience remains very familiar. The new emergency calls are mostly well done, but they grow repetitive right away; there's little reason to play more than one or two campaign maps, and just go straight into Free Play. The emergencies also still do not gel with the atmosphere of the game, being a fast paced arcade unit management game, while you're on the phone trying to prevent a murder. And lastly, the absolutely overwhelming amount of calls and the design of the game that makes you fail intentionally might not be for everyone. If you've played 911 Operator, there's not much in this sequel that warrants an upgrade; there is more content, but many of the same issues persist.

Our ratings for 112 Operator on PC out of 100 (Ratings FAQ)
Presentation
65
Some of the voice acting is decently immersive, and the basic visuals do the job. The UI is still a problem.
Gameplay
60
It's neat to see your own city in the game, but the switch to Europe changes very little for the gameplay mechanics. A few new mechanics can’t make up for a game that overloads you with calls and expects you to fail to be realistic.
Single Player
50
Repetitive emergency calls and some nonsensical design choices continue to plague the series. The game is still unable to marry serious incidents with its lighthearted tone and shallow gameplay.
Multiplayer
NR
None
Performance
(Show PC Specs)
CPU: Intel Core i5-4670K @ 3.80 GHz
GPU: ASUS Radeon RX 580 8GB
RAM: 16GB DDR3
OS: Windows 7 Professional 64-bit

90
No major issues
Overall
60
112 Operator is more of a spinoff than a sequel. It adds a few things, but also carries over all the problems of its predecessor. While there's still potential here for an enjoyable micromanagement game, it gets lost in the shuffle of bad design choices and repetition.