A Game of Inches

With the current state of the world, the idea of an extraterrestrial encounter is even more terrifying than usual. Despite the fact it would be an incredible occurrence, there's always a chance they wouldn't exactly be friendly. Perhaps more frightening than regular aliens, though, are the ones that can disguise their appearance. There's a reason films such as The Thing and Invasion of the Body Snatchers have stood the test of time as well as they have. It would almost be too easy for a parasite to infect society. This is a point repeatedly demonstrated in HyperParasite, but rather than have you facing off against that challenge, you take the reins of the creature itself. 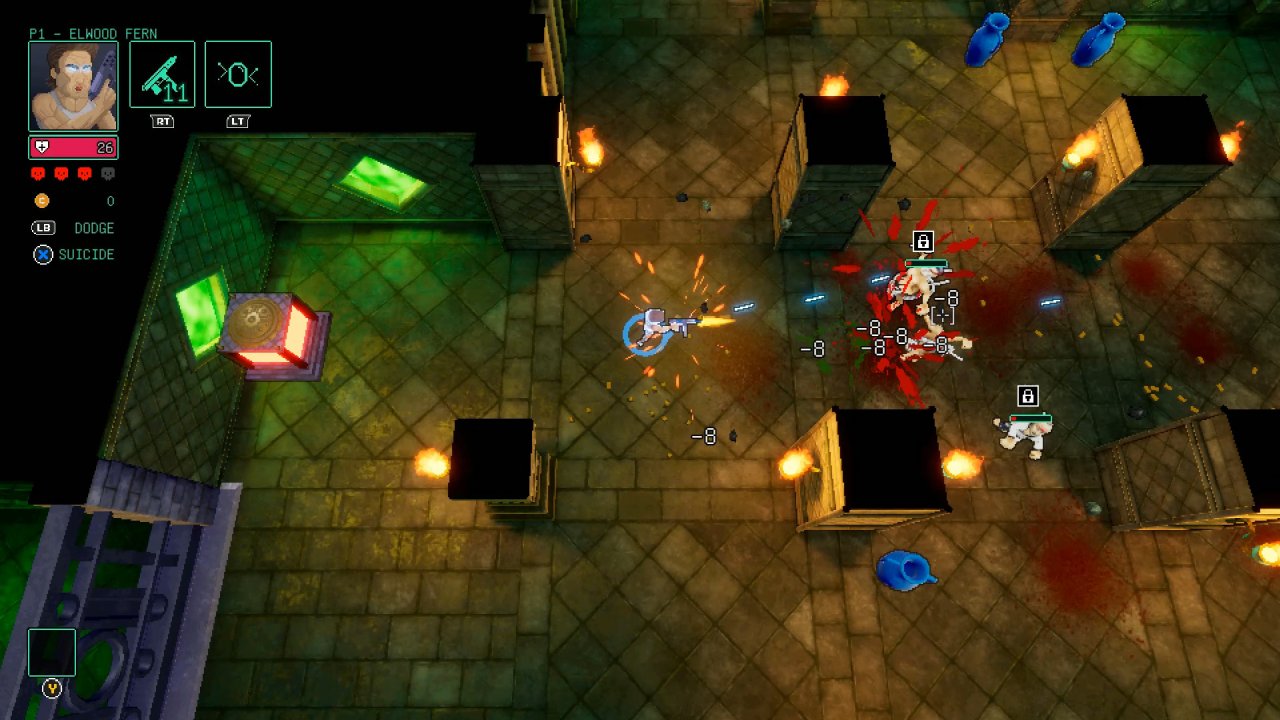 Following the likes of Destroy All Humans! and Alien vs. Predator, HyperParasite places you in the shoes of a menacing alien creature. The disgusting, goopy looking fiend you control has come to Earth in order to carry out its grudge against humanity. Its only goal is to sow chaos and bring about the end of days. Of course, humanity isn't going down without a fight, and the eyepatch-wearing President of the United States has given the order for any and all to hunt you down. A tall order to overcome, for sure, but also one dripping with fresh bodies to possess.

There's an interesting plot thread here, but the title is clearly not interested in building upon it. The idea of an alternate timeline America being forced to deal with this menace could have led to some fun side stories. However, since the game is focused on the creature, plot development kind of gets thrown out the window. The enemies are the ones dealing with all this nonsense. You are merely a force of terror sweeping across the nation. The parasite has no reason to care about the state of post-war USA, and as such there's no effort put into making the player care.

As a top-down shooter, how HyperParasite plays will be instantly familiar to most gamers. It has some twin-stick shooter aspects, as well as bringing in elements of bullet hell shooters. You move around with one analog stick, while using the other to aim your attack. Some of the characters you can possess are better suited for long-distance, while some are designed to get up close and personal. There are also rogue-like aspects included, such as randomized levels and enemy placement, that make every run in the game feel unique. Outside of the body-hopping mechanic, the gameplay does little to innovate, but it's built on a solid foundation.

As mentioned, POTUS has authorized all citizens of the country to fight back against the invader. Police officers, homeless men and sumo wrestlers are just a few of the personalities working together to accomplish this goal. As a rather weak parasite, there's plenty of danger out there. However, it also means that there are plenty of opportunities for the creature to shift forms. Although the creature has a long-range attack, and some slick moves, the only way to accomplish its goal will be to continually infiltrate society. 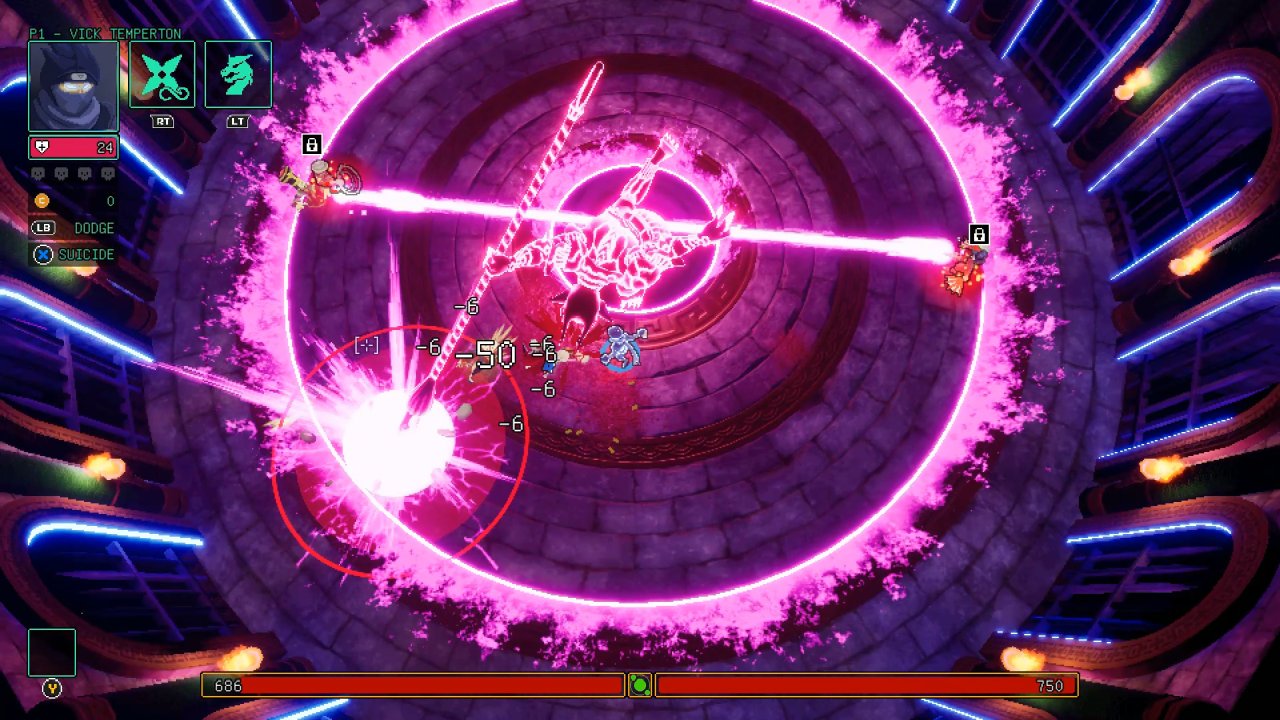 Split into five distinct acts, each section has its own unique class of characters to embody. In the first stage of HyperParasite, the creature has a few classes it can immediately take over. They may not be the most powerful types, but they can certainly get the job done. The papergirl can toss the rag at foes, while the firefighter can use his axe to chop down the masses. However, these early characters are all lacking on the defensive side of things. This means you'll frequently be hopping from subject to subject as the body you inhabit goes down for the count.

In order to unlock additional characters to use, not only do you need to harvest a brain from a specific version of said character, but you also need to purchase them from the shop. I'm not sure it makes a whole ton of sense within the game world, but that's just how it is. Depending on the class and strength of a character, you could be paying anywhere from $500 to $3000 and up to unlock one. Thankfully, despite being a rogue-like, any amount you chip in towards a purchase stays there forever. The more runs you make in the title, the more character you'll unlock.

Rogue-like titles are notoriously difficult, and HyperParasite is no different. The challenge is unrelenting, and never lets up from start to finish. It's incredibly easy to get overwhelmed by humans or get clipped with an errant projectile. And since anybody you possess, including your regular alien body, is weak, death is a frequent obstacle. You can level up certain aspects of your character, such as strength or health, but these upgrades only last for a single run. Once you start over, everything resets. Same goes for any modifiers or attack boosters you acquire during a run as well. As common with the genre, it's often two steps forward, two steps back with the title.

The added layer of difficulty that HyperParasite carries, though, comes from how you unlock new bodies. The first level is easy enough, because you have options readily available and the cost to unlock more is cheap. However, even by the second level, you run into issues where you have no possession opportunities, which typically leads to a dead end. From there, you must grind and grind until you can acquire new characters just to make advancement possible. Then the process just repeats itself again for the following levels. It can often feel like you're tossing yourself at a brick wall with the later acts. Eventually you'll knock it down, but the punishment taken, and time taken is brutal. 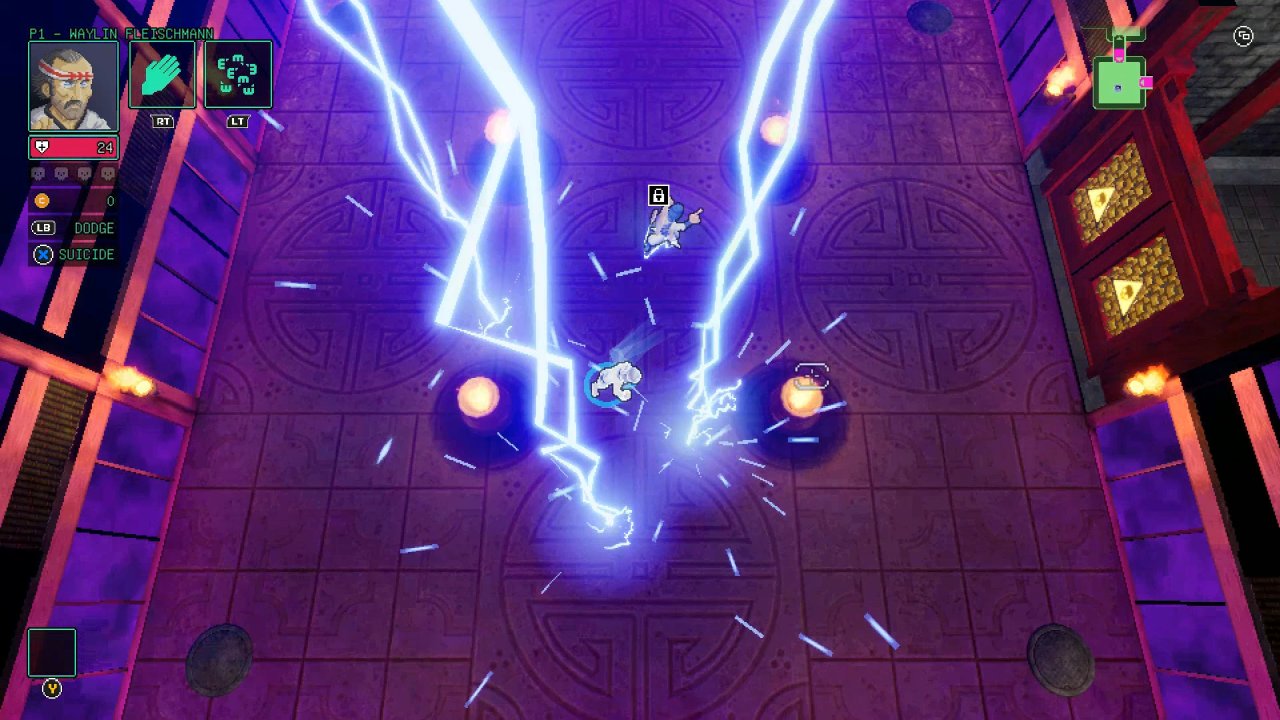 As painstaking as that process may be, though, the loop of HyperParasite is maddeningly addicting. Every run I have in the title always ends in the same way, with me telling myself “Just one more time”. It controls extremely well, and there's a solid rhythm to the action. I was quick to get locked into a groove when a run started. Troglobytes Games nailed the most important aspect for the genre. That's to make sure that although ripe with challenge, the title never forgets to be enjoyable to play.

HyperParasite boasts co-op play as well, so two alien globs can join forces to conquer the world. As a top-down shooter, the title lends itself well to multiplayer. It feels a little like a more difficult Smash TV in a way. Despite all the chaos that unfolds on-screen, it's easy to keep track of who is who, too. My main issue with the multiplayer option, though, is that it is only local as of right now. Online options would have added some great replay value, and made it easier to find a partner to play with.

Perhaps befitting the world of the title, HyperParasite is aggressively grimy looking. The visuals are dark and quite depressing. Sometimes a seedy look can do wonders for mood and setting, but it doesn't come together here. The character models look rough, the environments are bland and the whole effort is unpleasant to look at. Even the electronic soundtrack can't liven things up, as it falls on the more generic side of things.

Unflinchingly ugly and often frustrating, it would be easy to write HyperParasite off. However, underneath all that ugliness is a title that is a blast to play. The controls are tight and precise enough to handle the on-screen action, and the gimmick it revolves around is wonderfully unique. The brutal difficulty means it won't be for everyone, but for those seeking a challenge, the addicting loop of the game will sate their appetite.

Our ratings for HyperParasite on Xbox One out of 100 (Ratings FAQ)
Presentation
40
HyperParasite is a dirty, often unpleasant looking title. The character models are rough and the environments lack detail. The generic electronic music lacks personality as well.
Gameplay
80
Although incredibly tough, the title boasts a satisfying gameplay loop. Whether or not the rogue-like flavorings will be acceptable depends on how you feel about the genre as a whole.
Single Player
68
It can be frustrating to make headway in the campaign of HyperParasite due to how long it can take to unlock additional characters. Instead of moving forward, it can feel like you're stuck in place.
Multiplayer
75
Co-op play fits well within the framework of the title. It almost feels like a throwback to classic arcade efforts with how it is set-up. The lack of online multiplayer is a bummer, however.
Performance
85
No major performance issues to be found with the Xbox One version of the title.
Overall
70
HyperParasite is a tough title to love. The grind-heavy path of progression is a pain to deal with, and the visuals are muddled and unattractive. However, the gameplay is strong and addicting. Even in the face of constant death, you'll want to keep pushing forward. 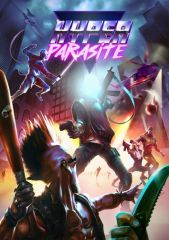 All videos for HyperParasite (1)
Advertisement ▼