A joyful return to this virtual sandbox

I've been wracking my brain trying to figure out just what it is about Animal Crossing: New Horizons that makes it so endlessly appealing; even while crossing the 20 hour mark and adding an expensive rock-climbing wall to my house. It certainly isn't its thrilling action, nuanced gameplay, or imaginative storytelling. Even the social elements aren't too groundbreaking here, and are in fact, somewhat limiting. Yet, at the end of the day, I constantly felt compelled to check back into my island and explore its current happenings, partake in crafting, collect goodies, and spruce up my house a bit further. I've realized that what this game (and series) does so effectively is the subtle, yet consistent feeling of accomplishment it provides. It's that yearning to continuously build towards something and see the results manifest, while perhaps showing off the results to a friend. It's like a colorful, animal version of life itself - just a more laid back, whimsical adaptation of it. 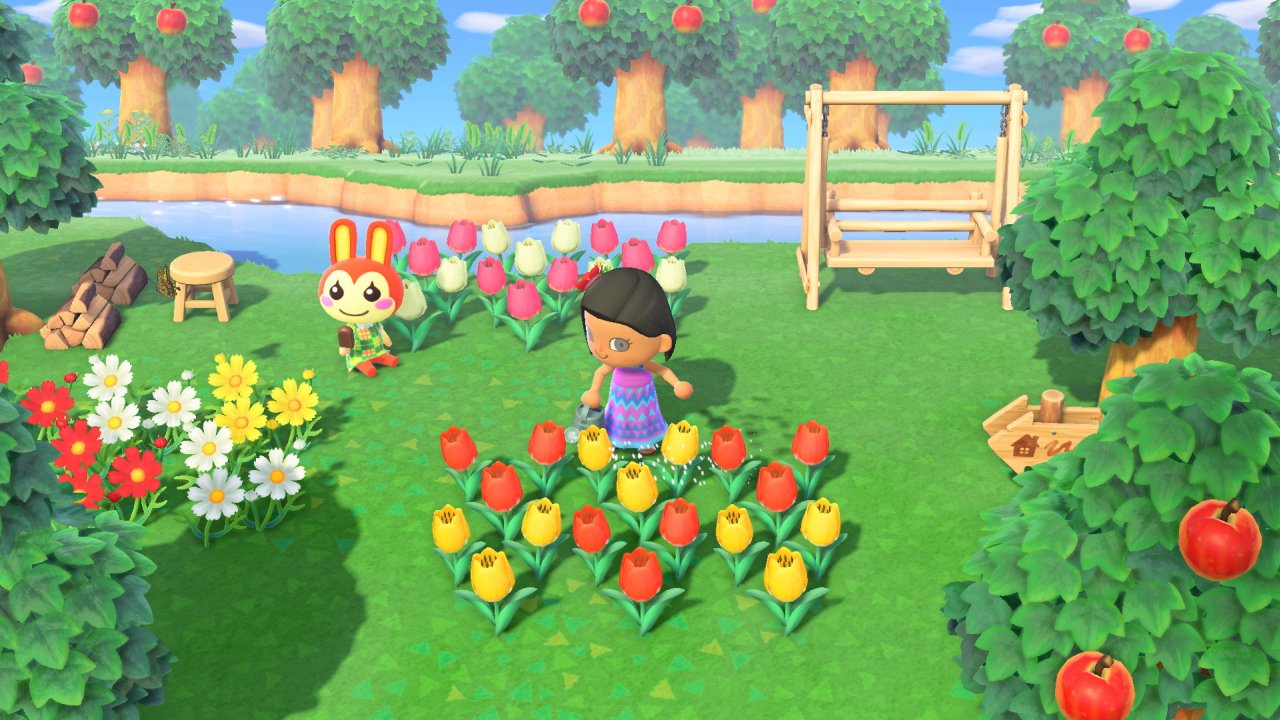 For those new to the animal kingdom, Animal Crossing is an easygoing sim game that tasks you with building a thriving community - in this case, a deserted island. To do this, you'll be gathering resources like stone and wood, nabbing insects and fish, digging for fossils, and occasionally pleasing NPC neighbors with gifts. You can also decorate your house with furnishings and trinkets, as well as upgrade your residence by paying off your mortgage dictated by tanuki shop-owner Tom Nook. You can earn money for this purpose - and for buying goodies - namely by selling items to Nook. New to the series is an engaging crafting system, along with basic terrain-shaping, allowing for greater customization.

New Horizons' revamped premise of developing an island from scratch proves to be a nice change. You're not just some nobody trying to make their way amongst a preexisting town with limited actions at your disposal. Nor are you a mayor given the overwhelming task of running an entire city. Rather, this sequel maintains a sense of freedom and versatility without being overwhelming. It's just you and your island, and it's all you really need.

In typical Animal Crossing fashion, this game is paradoxically designed for "short bursts" sessions, while holding tons of replay value long-term. This is thanks to its real-time clock and dynamic changing elements, which are well utilized in this island wilderness. The experience in the spring will differ from the fall; daytime happenings are different than the evening, etc. You'll even be given seasonal events that add colorful themes and new objectives. Already, Nintendo's dropped an amusing, if not slightly intrusive Easter event that tasks you with taking part in virtual Easter egg hunts and offers themed decor.

Regardless, you're likely to run out of interesting things to do for the day after an hour or two. This is often the case even if you are given an arduous task of, say, rustling up 15 things for your new inhabitants moving in. Still, there's always a reason to return, and I often found myself drawn back to my virtual playground to see what was new and admire my additions. Transforming your residence from a small tent to a furnished, fenced home decorated with flowers and a Godzilla statue is just a satisfying endeavor. 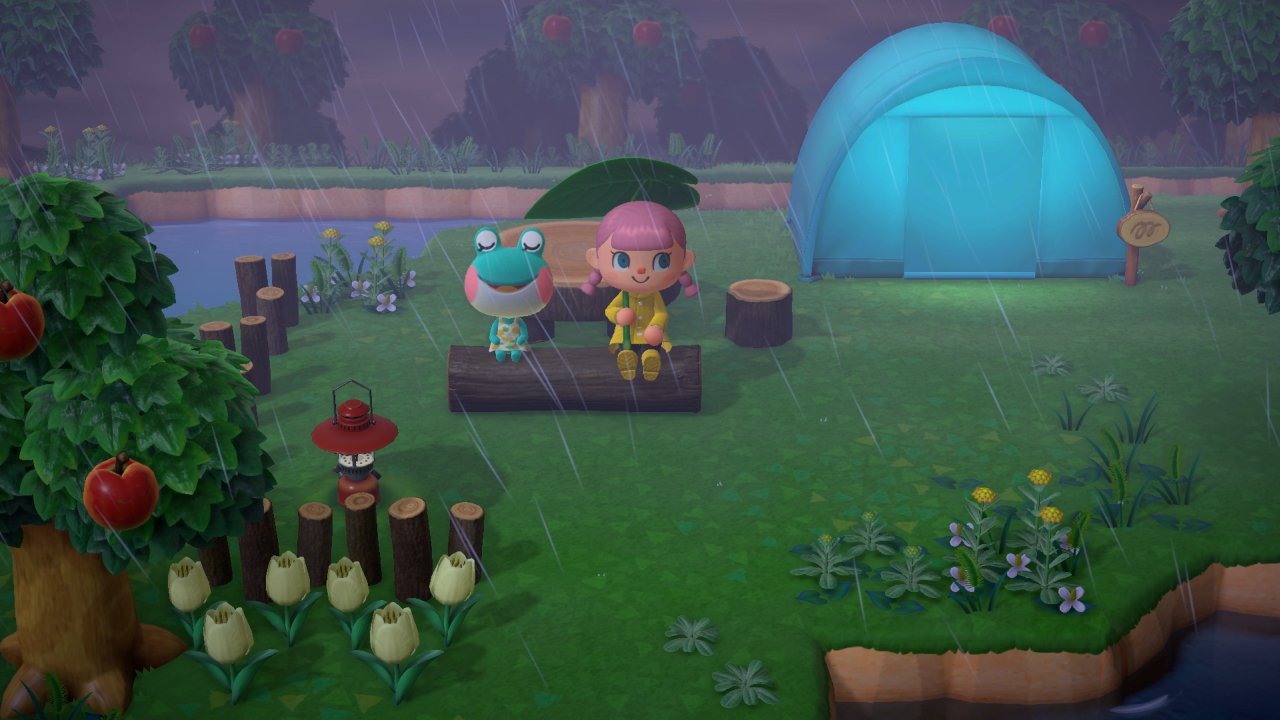 As always, the game operates on an internal clock that you must adhere to; provided you don't cheat and speed up the Switch's clock. This means that day-night transitions will occur in real-time, which often brings shifts in critters that show up as well as NPC actions. AI-constructed buildings will need a couple of days to complete, and you'll have to wait for nature to run its course when you plant trees and flowers. While it's a slow process, it's gratifying to see it all unfold and progress in real time. It all contributes to the game's delightfully organic feel and sufficiently mixes things up.

One key addition that adds depth and intrigue is crafting and basic terrain molding; sort of a simplified Minecraft mechanic. It's a cool inclusion that gives extra incentive and creativity in turning this vacant setting into a thriving island utopia. Still, the crafting could be a touch more streamlined and convenient. Aside from having a somewhat basic interface and item management, you can only craft a single item at a time; each of which has you sit through a 3 or 4 second animation. It may not sound like much, but it becomes a bit of a nuisance over time.

Gathering the core "building blocks" to craft many of the items - things like wood, stone, and iron, can be a repetitive process, and you'll need many of these. It also doesn't help that for the first few days at least, you'll be tinkering with "Flimsy" items to harvest them which break a bit too quickly. Still, while it all takes a tad more time and effort than it should, crafting proves to be a fun, rewarding task in the long run. Further adding to the game's personal element, you can also paint your own wardrobe designs if you're artistically inclined.

You'll be scouring the island for "do it yourself" or DIY recipes to unlock fun new things to craft. These range from beds to decorative trinkets to more practical things like ladders to traverse higher ground. This slew of tools, flair, and other items can be acquired through the shop, neighbor dialogues, bottled messages that wash up on shore, poppable floating balloons, or through natural game progression. This encourages you to explore and take part in the array of actions at your disposal.

You can expand this search with the neat feature to fly to other random islands with a purchasable ticket. This makes for a fun and useful diversion that allows you to gather foreign resources, which you can bring back to your home base to pawn, plant, or otherwise tinker with. These "Mystery Islands" will also be home to a new NPC, who you can coax to live on your island through a brief chat. While these areas are almost disappointingly small, the game makes up for this by cramming tons of detail via wildlife, resources, and critters. 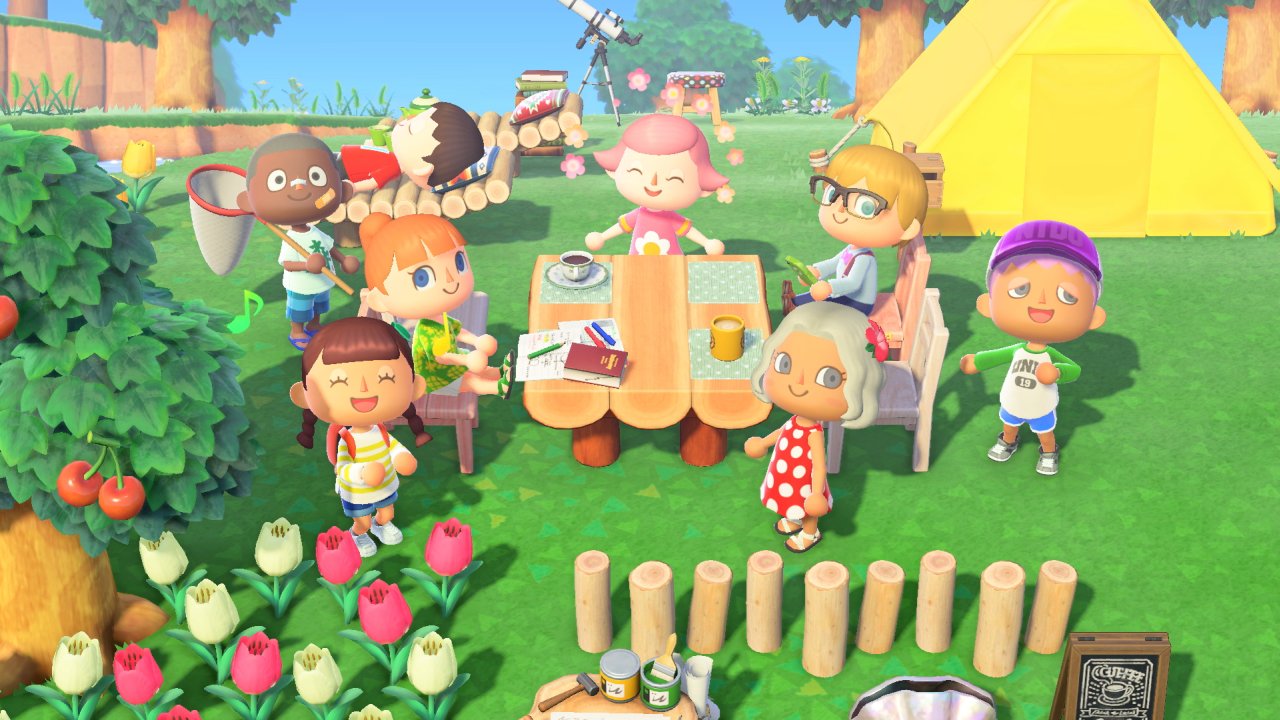 Fishing and insect-hunting emphatically makes a return here. It's a particularly enjoyable endeavor in New Horizons, thanks to an even larger list of colorful varieties, as well as the epic museum which displays all your fish, fossil, and bug findings. This gives collectors plenty to admire, though you can also gather rarer breeds to sell at Nook's shop. I found tarantulas make a suitable target - if they don't attack you first. These tarantula strikes prove just slightly less annoying than being bombarded by angry hornets after shaking a tree for fruit and twigs, but hey - it's nothing a little medicine can't fix. And considering these are the game's only real hazards, it's understandable.

One welcome addition is the Nook Miles feature. This is basically an in-game achievement system mixed with an additional form of currency. Tasks range from digging up fossils to paying loans to just shooting the breeze with neighbors. You can buy unique items as you would with the usual in-game currency of "Bells," along with avatar cosmetics and home and yard furnishings. This is also how you'll gain access to the Mystery Islands via a "Nook Miles Ticket". This system effectively grants an objective throughline and presents an alternative reward other than Bells and more Bells.

The multiplayer component is amusing; albeit fairly limited for a sim that stresses social gameplay. In terms of couch co-op, you can have up to eight others living on your island (four playing at once), or have them visit to just play around. Unfortunately, the lack of split-screen means your pals will have to follow you around closely. You can connect locally using multiple Switches, as well as online via the friend code-esque system of "Dodo Codes". Visitors are given a limited number of ways they can interact with your home turf depending on whether they're designated "friends" or more trustworthy "best friends." Though you can argue this feature translates to real life.

Your trusty in-game phone helps streamline things here, as you can chat and get notifications from those added on your Best-Friends app. Yet, there exists no way to randomly visit the islands of strangers nor any sort of centralized lobby system, which means these codes have to be shared elsewhere. Still, this does make for a fun little virtual hangout for a time, and allows friends to exploit the uniqueness of each island by scavenging and swapping items. 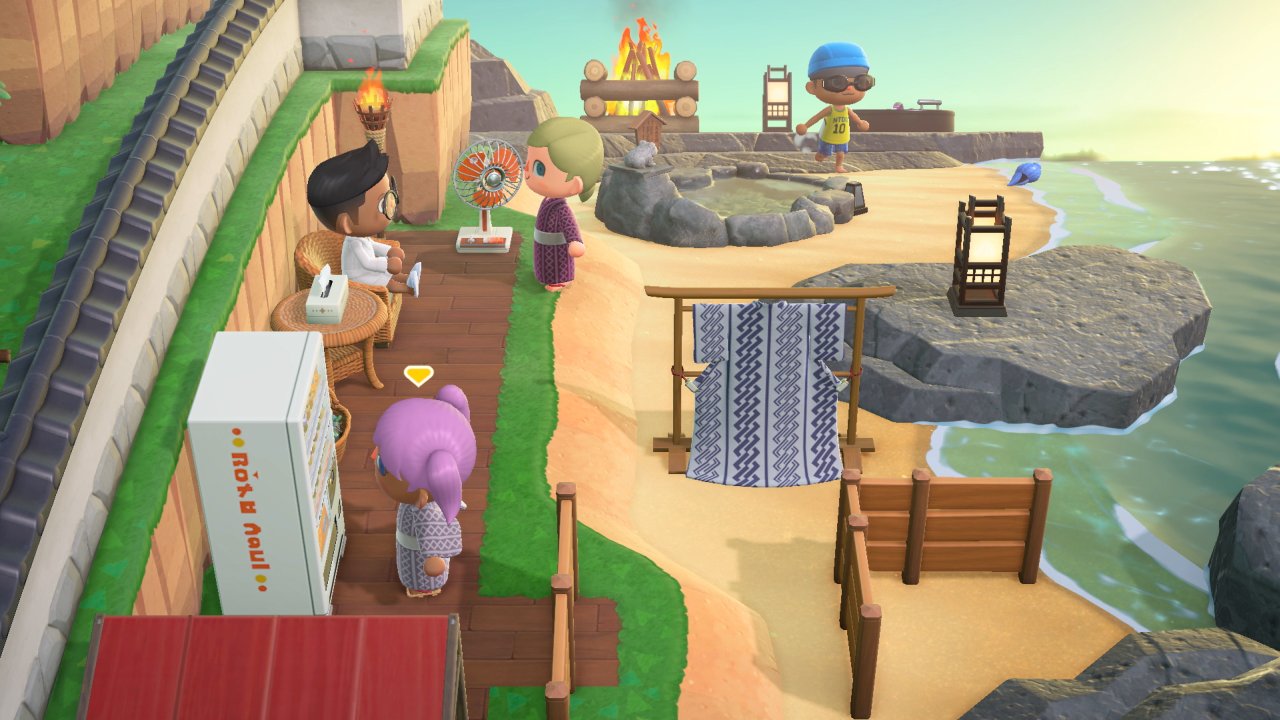 Aside from these multiplayer limitations and occasionally cumbersome crafting, it's tough to find a glaring weakness in this sequel. The few blemishes that do come to mind are mostly nitpicky. Inventory management airs on the clunky side, for starters. Thankfully, there are (limited) items stacks now, but there's no simple way to divvy up your stacks of goods into smaller piles. You can grab one at a time to separate them, but given the limited space you have, this isn't always ideal. Thankfully, you can allocate items to home storage which alleviates much of this anyway. Also, given the emphasis on exploration, a fully-controllable, rotating camera would seem ideal, rather than the two fixed angles allotted. These minor gripes aside, this is a typically smooth, well-crafted experience that's likely to keep beckoning you back for more island adventures.

Overall, you've got to take New Horizons for what it is - a low-key sim whose gameplay is pretty passive despite some new features and refinements. The island premise fits the relaxed, colorful AC series like a glove. The crafting elements, while not perfect, add a great deal of depth and gratification. Those who appreciate this type of experience, will find much to enjoy in this delightful virtual sandbox.

Our ratings for Animal Crossing: New Horizons on Switch out of 100 (Ratings FAQ)
Presentation
80
It may look cartoony and basic, but juxtaposing this vibrant, colorful Switch game to its predecessors - the visual leap is apparent. Gazing upon a sunset or admiring the colorful growth proves joyous, especially on the big screen. The soft, simple melodies make for nice background music as well.
Gameplay
83
The experience stresses a slow, but satisfying build to island glory through development, crafting, and gathering goodies to show off. The game stays true to its roots, while taking a page from the Stardew Valley playbook to add greater depth and customization.
Single Player
81
Though social gameplay is a big selling point of New Horizons, there's plenty of fun shenanigans to get into flying solo, both on your own island and the lavish Mystery Islands. The lack of a narrative is filled in by whimsical, likable animal buddies who always enjoy chatting.
Multiplayer
74
It's a somewhat restrictive experience that can do with some more fleshing out. Overall though, visiting friends' islands is a mostly smooth and entertaining endeavor when making the (small) effort to arrange it.
Performance
75
The initial boot-up is a touch lengthy, but overall performs quite smoothly
Overall
80
New Horizons draws from familiar Animal Crossing elements while building upon and redecorating them with its fun island motif. It's still fairly minimalistic, but I liken it to a warm honey tea - it may be simple and subdued, but still provides a relaxing, enjoyable experience.