It's an idea that fits ever so perfectly in this era of the digital marketplace. Create an action game, make it a flight arcade game with lots of hectic dog-fighting, allow folks to compete against one another online in different modes and as the selling point: it's set in the Peanuts universe. Yes, 'Great Pumpkin' Peanuts. What you get is Smart Bomb Entertainment's Snoopy: Flying Ace, available exclusively on the Xbox Live Marketplace. 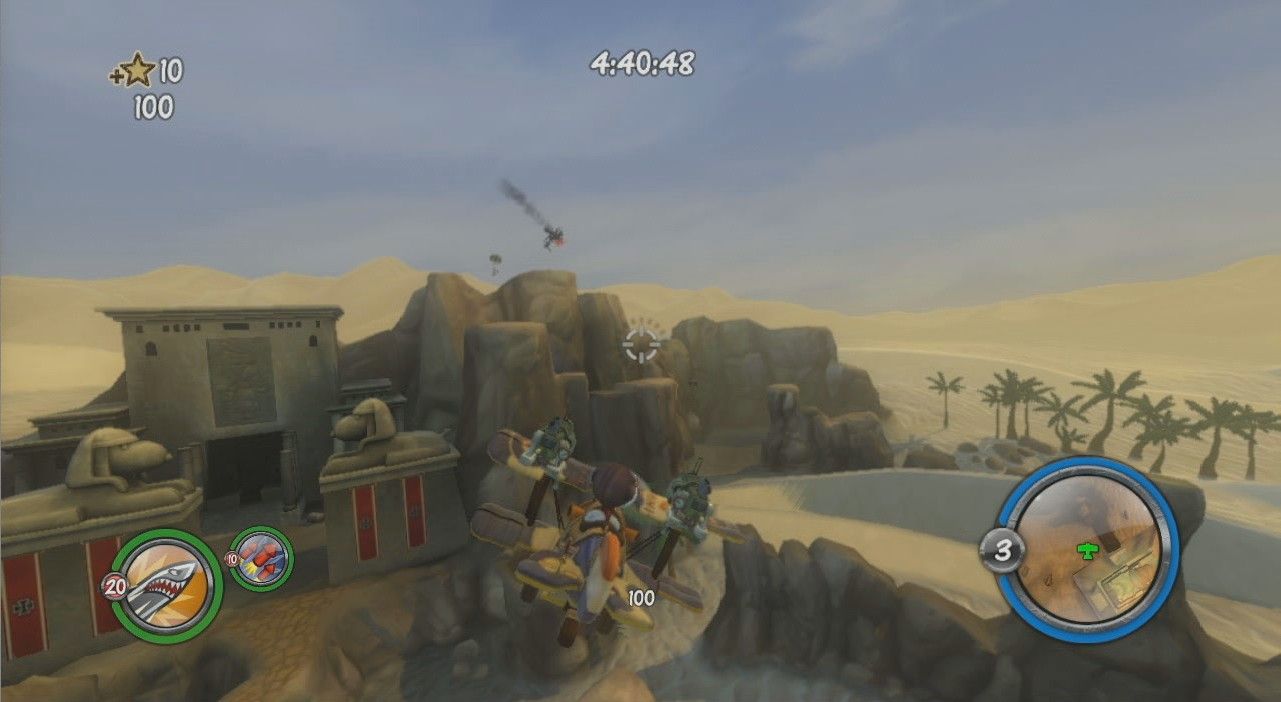 That opening line should pretty much say it all, but that would deny the impact Snoopy has as well as his place in pop culture history. For 800 Microsoft Points, you get a quick-paced action game that is very easy to pick up and play, catering to all with both single-player and multiplayer modes. Snoopy: Flying Ace is a marvelous flight combat game enough so that you can take out the Peanuts license and still have a solid game on your hands akin to the 2003 gem Crimson Skies: High Road to Revenge.

The single-player mode puts the player in the role of the Flying Ace himself, in a series of missions that have Snoopy either racing around courses, or taking out his arch-nemesis the Red Baron and his squadron in defense of several landmarks. In addition to the appearances of many Peanuts characters as both friend and foe, the game allows players to use their Xbox Live avatars as the pilots of the many different types of airplanes, each with its own advantages and disadvantages, available to unlock. Playing through the single-player as well as the multiplayer mode will unlock a plentiful amount of rewards for players, such as new biplanes with different skins, secondary weapons like homing missiles, tar bombs, sticky mines, etc.

Multiplayer challenges would seem rather limited based on the number of available modes, but once you're in the battlefield, the action does not stop. You have the standard Dogfight and Team Dogfight (deathmatches - you know the drill). There is Capture-the-Flag, and two personal favorites: Dogpile and Pigskin. Dogpile has one player holding a bone while the rest of the party goes after the bone carrier. A team variation of Dogpile is also available. Pigskin is a basic form of American football, where one team attempts to hold on to a football and get to the end zone for a touchdown while the opposing team tries to take the ball carrier out. The multiplayer holds a large number of players, so every Dogfight match feels like any virtual dogfight would. Dogpile and Pigskin are seriously too enjoyable to pass up, even if you aren't an NFL fan. 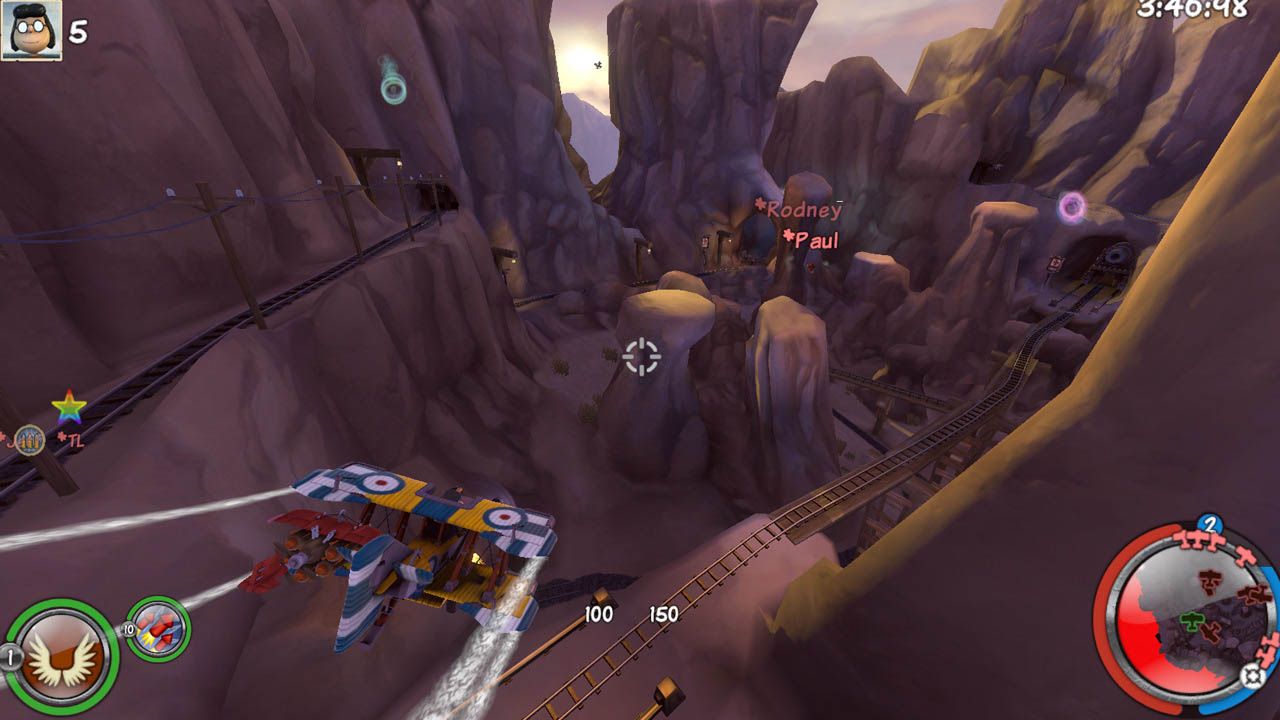 One feature that should not be overlooked is the design. Snoopy's battle against the Red Baron in different models of biplanes automatically reflect the World War I-era style of combat, as well as the look of it. Smart Bomb also successfully integrates a steampunk look to give the game a friendlier approach. It's truly fascinating that a game featuring famous cartoon children and their mascot beagle can pack such a punch and succeed at hardcore aerial combat, all compressed into an Xbox Live download. The level design is decent. Many of the game's levels are over islands and villages, nice to look at but nothing memorable (save for an Egypt-based map with a Snoopy sphinx), but the most beautiful map done is the City of Lights, set at dusk with a brightly lit Eiffel Tower for players to fly through and under to avoid gunfire. The music of Snoopy: Flying Ace tries to reflect the heroism and the risks of aerial combat and war seemingly inspired by the first few Call of Duty games, complete with military drumming, dramatic strings, and epic brass.

It's a tad difficult to find something to truly criticize, finding a major problem to address with Flying Ace, when its achievement is so simple and is so well done. Certain lag issues plagued some online sessions, but nothing game-breaking. The visuals are appropriately cartoony and the Peanuts characters look okay in 3D. Perhaps something in the way of the cel-shading of The Legend of Zelda: The Wind Waker or Viewtiful Joe might have been a more apt choice and done the Peanuts look justice. Folks may be turned off by the single-player mode merely due to the alternative of competing against other human players on Xbox Live. The single-player, however, challenges players in certain ways, such as finishing a map under five minutes, not being shot down, etc., and rewards them with medals and awards. If Snoopy's trademark cackling after shooting down enemy planes doesn't sell you in addition to everything else mentioned, then clearly this game just isn't for you.

Last summer, players were pushing and, let's not kid ourselves, team-killing to hop to the skies and have their air battles over Japan in Battlefield 1943. This summer adds a Snoopy flavor to it, and it's honestly great. You cannot go wrong with 800 points. Here's hoping the success of Snoopy: Flying Ace leads to a Peanuts-inspired Grand Theft Auto starring Joe Cool!

Our ratings for Snoopy Flying Ace on Xbox 360 out of 100 (Ratings FAQ)
Presentation
90
Peanuts meets Crimson Skies in World War I-themed dog-fighting adventure. Can't go wrong there.
Gameplay
81
Play as a majority of Peanuts characters with solid controlling and a generous amount of customization available.
Single Player
79
Satisfactory single-player of defending territories while shooting down plane after plane. Offers different challenges for better rankings.
Multiplayer
88
Few modes to choose from, but all are excellent and despite tiny server issues, holds a large amount of players incredibly well. A thrilling experience.
Performance
80
Cartoony 3D design is above average but would have preferred cel-shading. Music is appropriately epic in some cases.
Overall
85
Simple, fun, challenging, and inexpensive. If you enjoy arcade-style flight combat and the lovable Peanuts gang, Flying Ace is right up your alley. 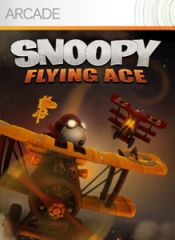