ORI AND THE WILL OF THE WISPS
Platform: PC
85
SummaryNewsArticlesVideoScreens

Ori and the Will of the Wisps Review

Before Gears of War 2 released, the developers at Epic Games promised that the upcoming sequel would be “bigger, better, and more badass.” Whether or not it turned out that way is beside the point, as every sequel strives to improve and most have a bigger scope. Epic just found a way of condensing this into a memorable marketing slogan. Ori and the Will of the Wisps has nothing in common with Gears of War 2, aside from the fact that it is a direct sequel and also published by Microsoft. The metroidvania 2D platformer from Moon Studios does, however, successfully execute the mantra championed by Epic many years ago because it includes a sizable world to explore, plentiful combat, and more astonishing visuals. 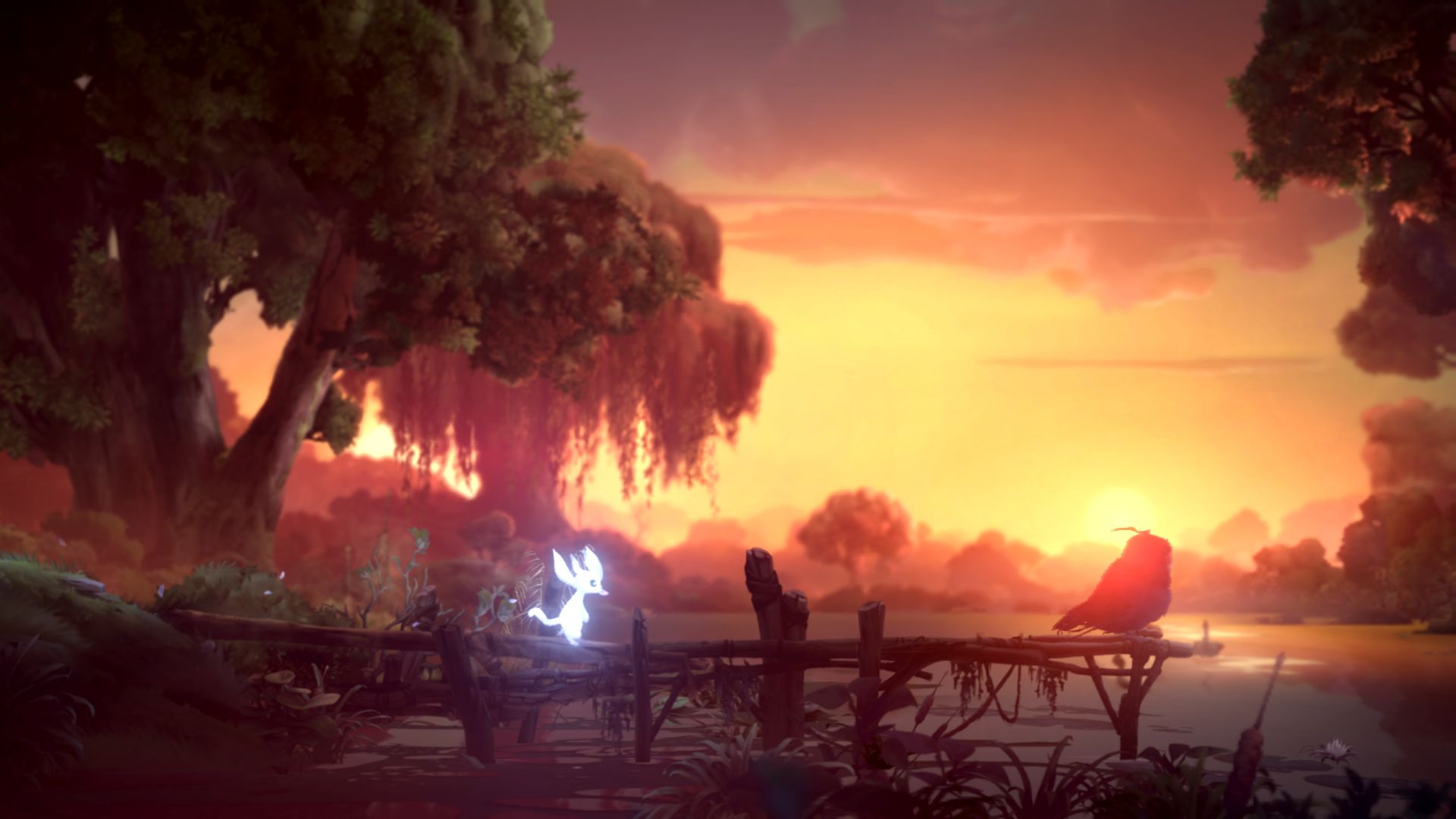 The story of Will of the Wisps begins with Ori encouraging a young owl, Ku, to fly on her own. Unfortunately Ku’s wings do not work and so Ori finds a feather that Ku attaches successfully. Ori climbs on her back, and together they soar into the sky, but are soon separated in a violent storm. Ku loses her feather and is trapped in a dark wood. Ori must find her, but that is not the only task on this journey. Decay has spread across this distant land and you can help the inhabitants by rebuilding their homes, purifying the streams, and removing evil creatures. Some of them even have basic side quests to undertake. But Ori’s main goal is to seek four magical Wisps spread across the region. Once they are united, you can bring peace to a lost land.

Like its predecessor, the world is beautiful. Presented in two dimensions, many of the environments are packed with detail that conveys a third. Moss, plants, leaves, aged tree stumps, stone monuments, and dilapidated shacks are just the tip of the iceberg in the lush and layered environments. Color is used to distinguish the different platforming elements, be it the deadly neon pink spikes or the soothing green of a health pad. Variety is just as impressive, with each of the interconnected regions taking on a different mood; there are the dark tunnels in the Mouldwood Depths covered with spider webs and twitching walls, and then there are the clear blue ponds of the Lava Pools with snapping clams and waterfalls. Music is diverse and matches the depth in each of these stunning locations, with great use of choir, chirpy flute, flowing piano, and strings. The inspirational score syncs perfectly with the animated scenes, helping to convey emotion at both ends of the scale with just a few careful notes. Aside from when the audio muted itself in a temporary glitch, the game world is as pleasing to hear as it is to see.

Equally pleasing is the platforming. Ori will spend a lot of time jumping over obstacles and finding high ledges by scurrying up sheer walls. Jump pads provide height, wind tunnels can be navigated with the feather, and momentum can be gained from redirecting projectiles and dashing mid-air. Spirit Wells across the world allow fast travel and are used for saving, although checkpoints are frequent. The world size is large and most of the areas are dense with either challenge (creature or environmental) or collectibles. Some places are sparser because they’re used for cutscenes or chases, but rarely does the world get boring or tiresome to traverse. The most annoying part of platforming is that some enemies are placed near tricky jumps—they have to be killed first, which is fine, but some respawn if you move a short distance away. 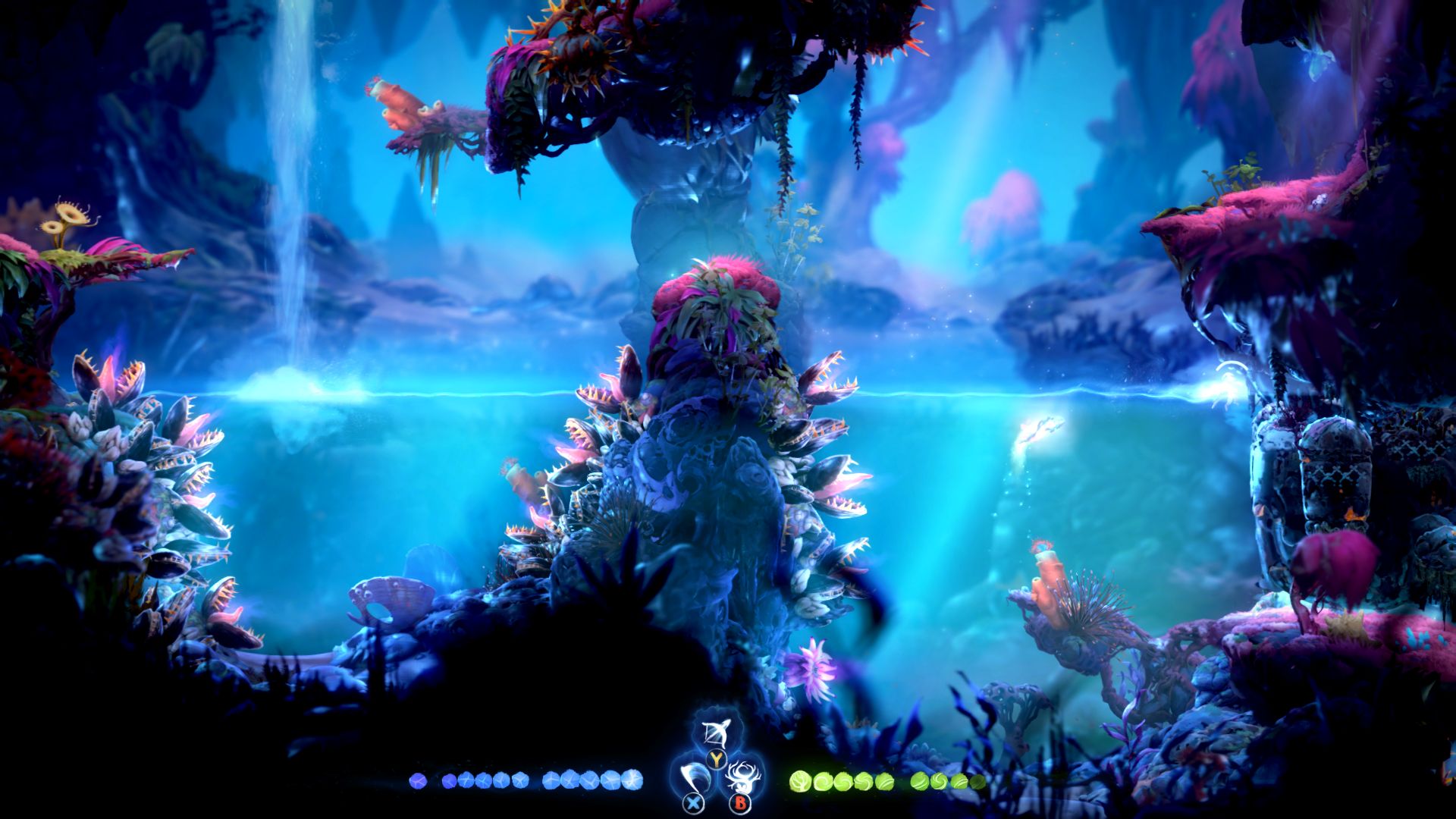 To keep the platforming fresh, Ori will gain access to new abilities in gratifying regularity. The progression is non-linear and sometimes it is not clear if you need a new ability or just need to get better with the existing toolset. On normal difficulty, the game prompts the player with tips, like using the feather to stoke a fire, but it usually lets you figure things out. To get through the Lava Pools, Ori can either use oxygen bubbles or just purchase an ability that enables breathing underwater. Darkness is a genuine threat in the spider tunnels and Ori must stay near moving fireflies to survive. In the sand-swept wastes of the Windtorn Ruins, players will learn how to drill through the ground like a torpedo; this is used to race a creature that belongs in a Frank Herbert novel and also to find hidden treasures. Health and energy boosts are always nice to stumble across. Shards are handy too, as they can be equipped in slots to provide more damage or the ability to cling to walls. Many of the hidden collectibles are actually spirit light orbs that serve as the currency for both abilities and upgrades.

Spirit light is also gained by defeating opponents in battle, and there is a great range of creatures to fight. Spiders hang from the ceiling and fling poisonous orbs. Beetles charge and are vulnerable from behind. Pesky mosquitoes swoop at high speed, requiring careful attack timing or dodging. There are several offensive tools to deal with these colorful foes. The main offensive weapon is the Spirit Edge melee attack, and it proves satisfying for most of the game thanks to its rapid speed and solid damage. Some abilities are less useful; the automated sentry has poor damage and does not last long, and the star (a shuriken type weapon) is clunky and has a paltry range. They never justified their place as one of the three hotkey-abilities, even though combat can be paused at any time to swap them around. Other, better, attacks took their place, like the spike or the fireball, which offered greater range or damage. Having some flexibility is nice, but players might stick to just a few abilities for most encounters. 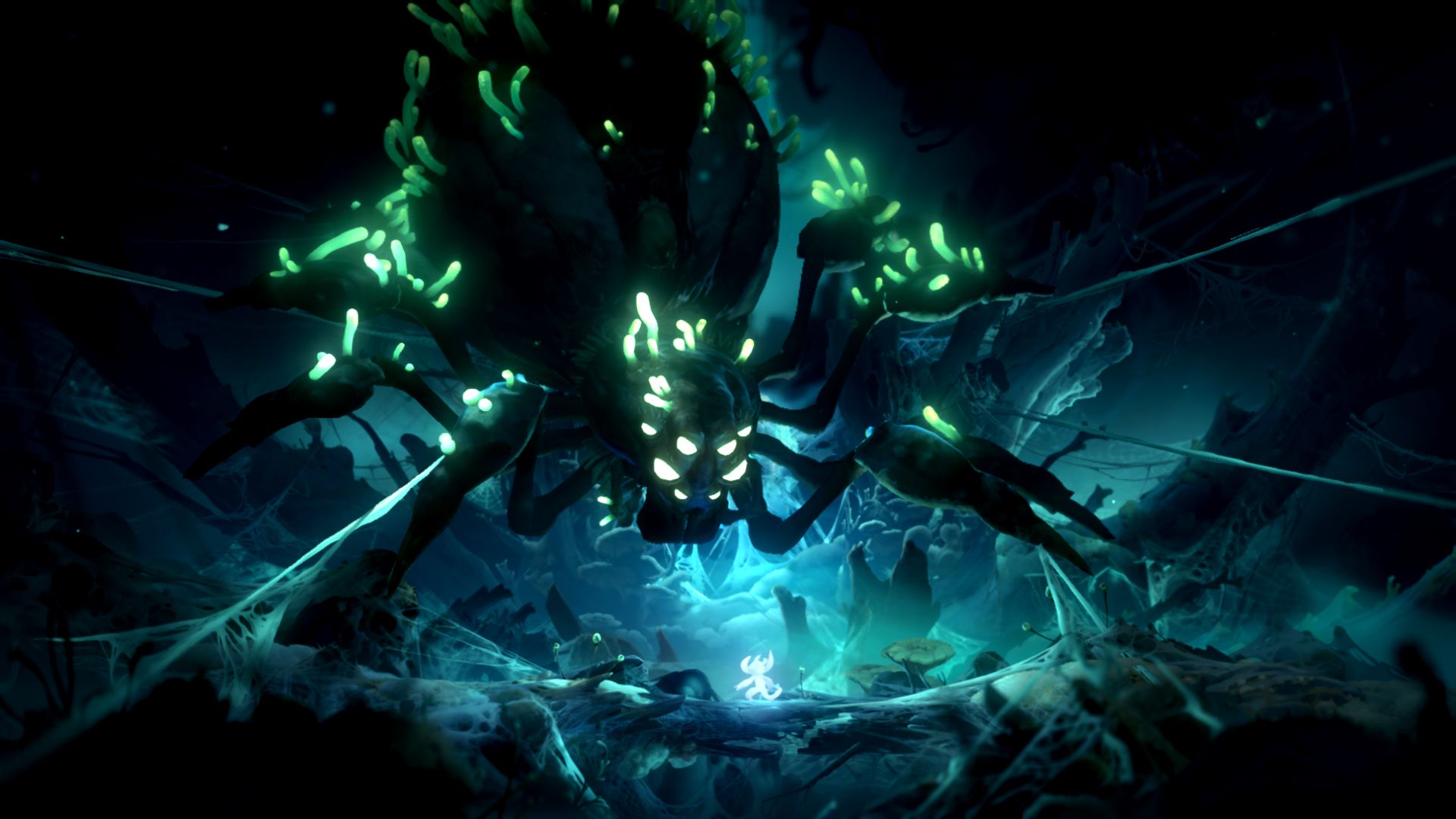 More intensive combat is reserved for a few traditional boss battles. One of which is a gigantic spider that spawns minions. The busy action during these hectic fights, with a zoomed out camera, makes it a little hard to keep track of Ori moving about. Bosses are fairly traditional for the genre; they have distinct attack patterns and windows of vulnerability. They can also be tedious because there are multiple stages at arbitrary health levels. Plus, Ori can die rapidly after just a few mistakes. One fight against an amphibian boss left Ori without any ground to stand on—making it impossible to self-heal after a certain stage. Fortunately none of the bosses are that hard (and there are only a few), so they just help to break up the regular platforming segments.

Once you conquer the final boss, after around 12 hours, you may like to return to the world and find the remaining collectibles or finish side quests. This is the best time to attempt the trickier optional areas. With late-game abilities, like launch, cruising around previously explored levels is a breeze. Even falling on spikes or colliding with enemies is less punishing with larger pools of health and energy. Side quests are not particularly exciting. Characters require things, like a hat or some water. The only way to get them is to finish quests for others looking for different items, so they’re not much more than circular fetch quests. Fortunately there is more to do. Special ore can be found to rebuild the Wellspring Glades—home to the friendly characters and a safe haven. Speed trials will test your agility and combat shrines will provide another shard slot if you can best a few waves of baddies. While finding every collectible might be a test of will, there is a decent offering of optional tasks. 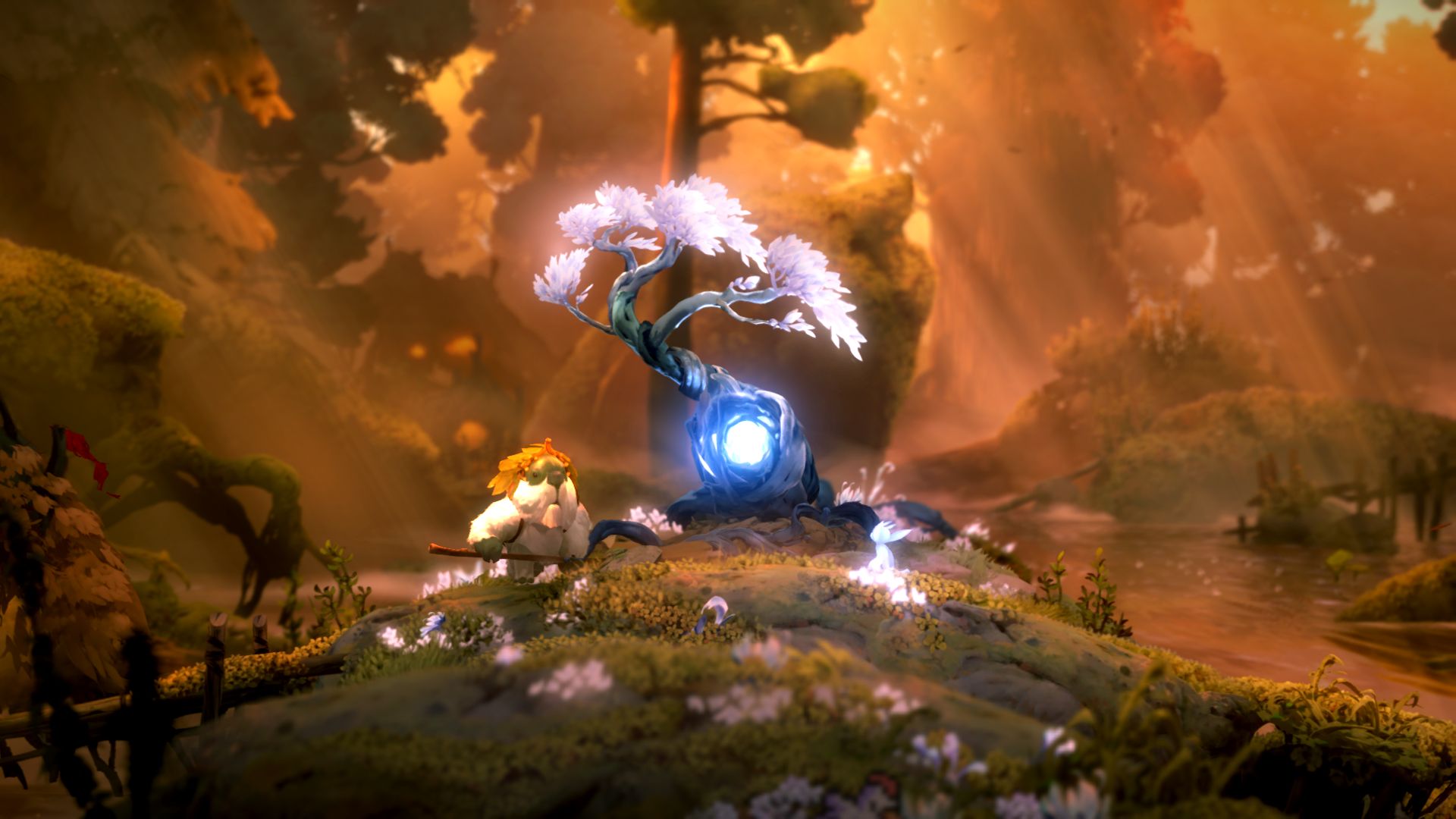 It’s hard to find major issues with Ori and the Will of the Wisps. Certain combat abilities are underwhelming and the side quests are fairly basic. You could also criticize some of the boss battles as being a bit messy. But none of these matter a great deal in a sequel that takes the original formula and does everything better, from combat to exploring. There is a great world to visit and a visual treat in every corner. Platforming is fantastic, with some healthy challenge and a consistent stream of abilities to master. Going back through areas is never a chore because of better tools and different options, along with multiple paths. Compared to the original, the world is certainly larger, the extra combat makes it livelier, and the beautiful varied art and musical score make it more luscious.

Our ratings for Ori and the Will of the Wisps on PC out of 100 (Ratings FAQ)
Presentation
90
Stellar world design with great color and variety across different regions. Musical score is excellent with great emotional connection to the story.
Gameplay
85
A steady acquisition of abilities grants Ori access to the different zones, each providing more new things to learn. Combat is widespread with many options to fight different foes, although some abilities are better than others.
Single Player
75
With an emotional conclusion, this sequel tells a good tale of sadness and joy. It does quite well with only a few words, relying on animations and scene composition to convey the rest.
Multiplayer
NR
N/A
Performance
(Show PC Specs)
CPU: AMD Ryzen 5 3600
GPU: XFX RX 480 GTR Black 8GB
RAM: 16GB DDR4
OS: Windows 10 Pro 64-bit

80
Sound issues late game saw some combat audio cut out completely for a short time. Some visual corruption was seen in the background of a few areas. Otherwise it performs well.
Overall
85
Stunning visuals and brilliant music is just the first course in Ori and the Will of the Wisps. With its large world, lavish combat, and a smooth implementation of the metroidvania design, this sequel is a must-play for fans of the original, and highly recommended for everybody else. 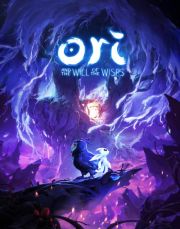