US politics have captured the attention of the world in these past few years. While the nation was always a super power and its leader in the global spotlight, it seems that all hell broke loose ever since 2016. With the 2020 being an election year, the madness has been ramping up early, this time with the Primary elections stirring all sorts of drama as the Democratic Party tries to decide on their candidate. Whether you’re exhausted from all the media coverage or can’t get enough, there is now the option to simulate the presidential election with the newly released The Political Machine 2020. 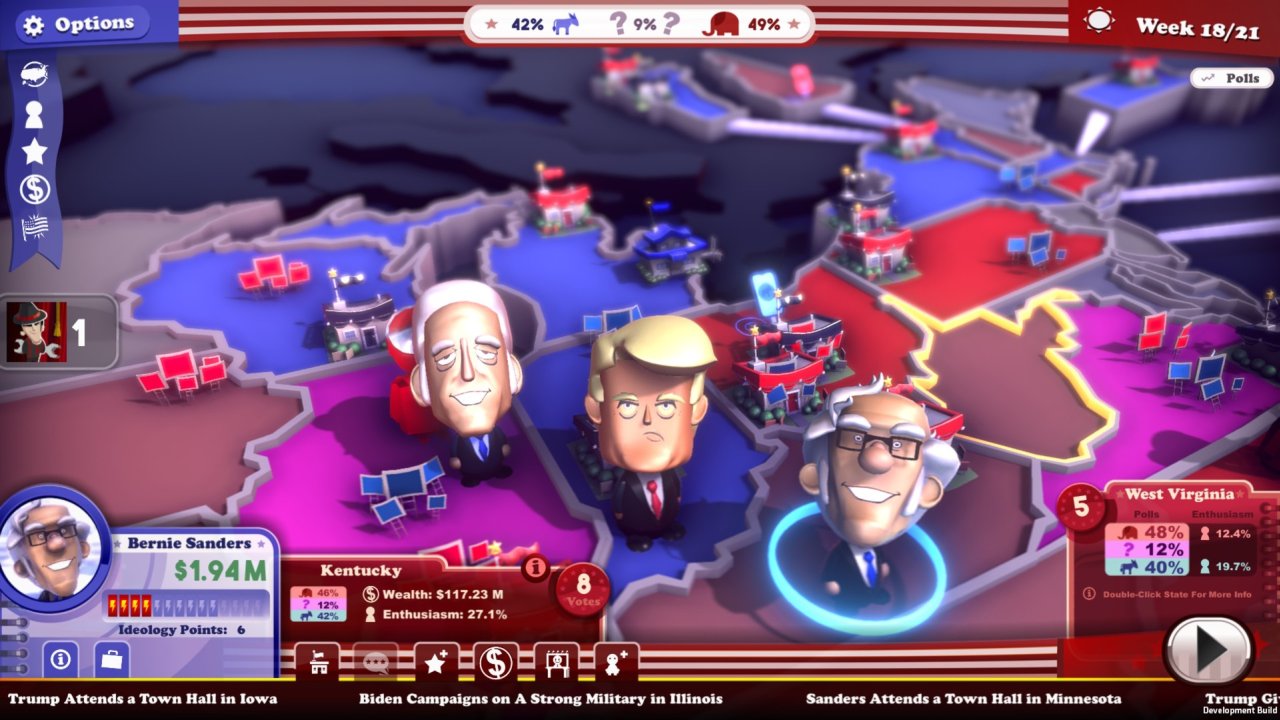 The Political Machine is a series that has been running since 2004, offering a new game to the players with each US election. This fairly straightforward strategy game sees you take control of either the Democratic or Republican candidate, and try to win the coveted White House seat. For the 2020 edition, you can choose from a number of Democratic candidates, most based on the real people that participated in the Primaries such as Pete Buttigieg, Tulsi Gabbard, Bernie Sanders, and Joe Biden. While you have a number of candidates, the list is a bit short compared to the 2016 edition of the game. On the Republican side, things are even more slim, with less than 10 options, one of them being a fictional comet. It’s rather disappointing to see the options trimmed down so significantly.

You begin by choosing one of the candidates, or creating your own, and setting the difficulty. Thanks to the most recent patch, you can also extend the number of weeks that you have until the election – another omission from 2016 that has now at least been addressed. Still, it’s disappointing that the game only focuses on the final bout between the two candidates for Presidency after all these years; the Preliminary elections are not in the game. Each of the candidates has a set of stats, including stamina, minority appeal, starting money, media bias, and so on. The stats are allocated to create a balance and each candidate has strengths and weaknesses – the stats try to be based on the real personas of the 2020 candidates, but how accurate they are is up for debate.

The campaign takes place over the map of the USA and its many states. Each week, you travel across the country, drumming up support and trying to win enough votes in each state. At any time you can click to see where each state stands when it comes to key issues, the popularity of each party, the wealth of the state, and how many Electoral College votes are at stake. Much like the real election, players must decide what to focus on to ensure victory - do you go into the swing states, solidify your support strongholds, or try to convert those that typically voted against your party. 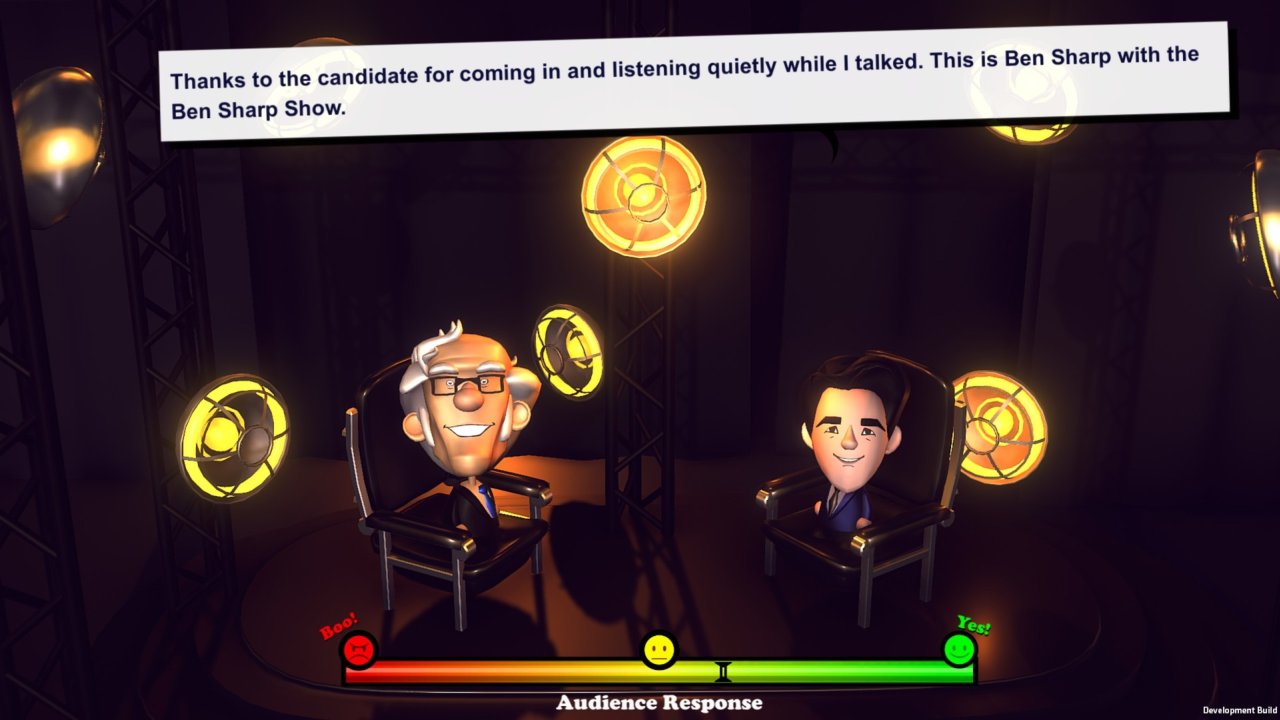 Traveling between states takes energy, and so does performing actions. How much you do each week is determined by your candidate's energy level. After landing in a state, you can give a speech or attend an interview by using a simple menu with topics. The game tries to be current by giving you speech options such as Building the Wall and stopping the corona virus, alongside the typical subjects of universal healthcare, wealth inequality, and so on. Each topic shows what effect it has - if it helps or diminishes your support in the state among voters - so there's no guessing or checking menus. The game tries to be realistic, so for example the southern states are more likely to be favorable towards conservative policies.

Besides your public actions, you also need to manage campaign financing. Candidates start with varying amounts of cash, and to earn more you have to host fundraising events - it's just another menu option that drains your energy. You'll want to do it in the richer states for better results; with that money, you can buy ads to promote your position and issues either within the state or nationally. You can also build headquarters; these can be upgraded, and produce income with each turn. HQs allow you to unlock a wider range of topics to talk about within the state, and also purchase Operatives. These are additional avatars that offer boosts in whichever state you place them in.

Your chances of winning a state are defined by Issue Score (where you stand on things) and Enthusiasm. The latter stat reflects how aware people are about you in the state, and can be improved by giving speeches, buying media ads, and simply visiting. There are also random events that pop up on the map, and if you interact with them, they can have positive or negative outcomes. It's a bit of a pointless toss-up that's not worth the risk, unless you're already losing the state. While all these systems may seem straightforward, it can be hard to gauge how to "win" on a particular issue, or how to swing undecided voters to your side. 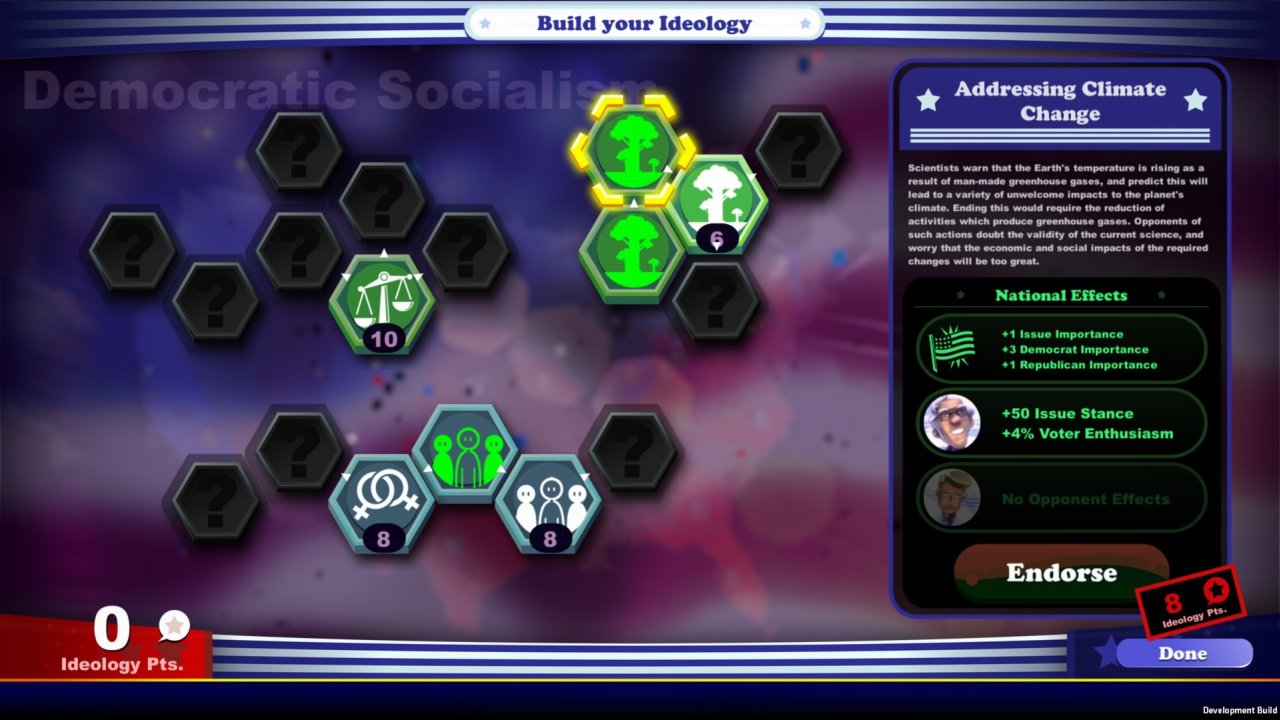 Another awkward mechanic is the Ideology tree that each candidate has. This is essentially a small skill tree, where you spend points to unlock new national issues to talk about, such as Education and Aboriginal Rights. These trees are fixed to each candidate, and if creating your own avatar you must pick from the existing list. You earn new points too slowly and the issues never seem to resonate as much as local speeches.

After weeks upon weeks of battle, the vote takes place, and hopefully your candidate claims victory. There's nothing to do in the campaign besides trying to win Presidency, so after the big decision you can just start another campaign. Besides the main mode where you play 1v1 against AI, you can also play multiplayer, but shockingly not locally. The multiplayer is barren of games to join, so it's best to have friends recruited who'll play online against you. Another rather arbitrary mode is AI vs AI, which basically lets you watch two selected candidates battle it out. Perhaps it’s an amusing option to help settle arguments? Well, Trump won in the couple of campaigns we observed in the mode.

For a simpler strategy game such as this, replay value is critical, but the 2020 edition seems to have taken steps back in this regard. Besides the mentioned lack of candidates, the inflexible Ideology system, and still lacking Primaries, there are a few features that have seemingly gone missing after 2016. For instance, the currency has been reduced to just cash, ads simplified, and a randomizer option so that states could have random voters and preferences. The 2016 edition is no longer on sale, though.

But it's not all doom and gloom. The game does look better, compared to its very barebones predecessors. The cartoony art style suits it fine, and most of the menus and information are fairly clearly laid out - if without much finesse. Still, it's a lower priced game, so don't expect anything overly impressive; the audio is quite barebones. 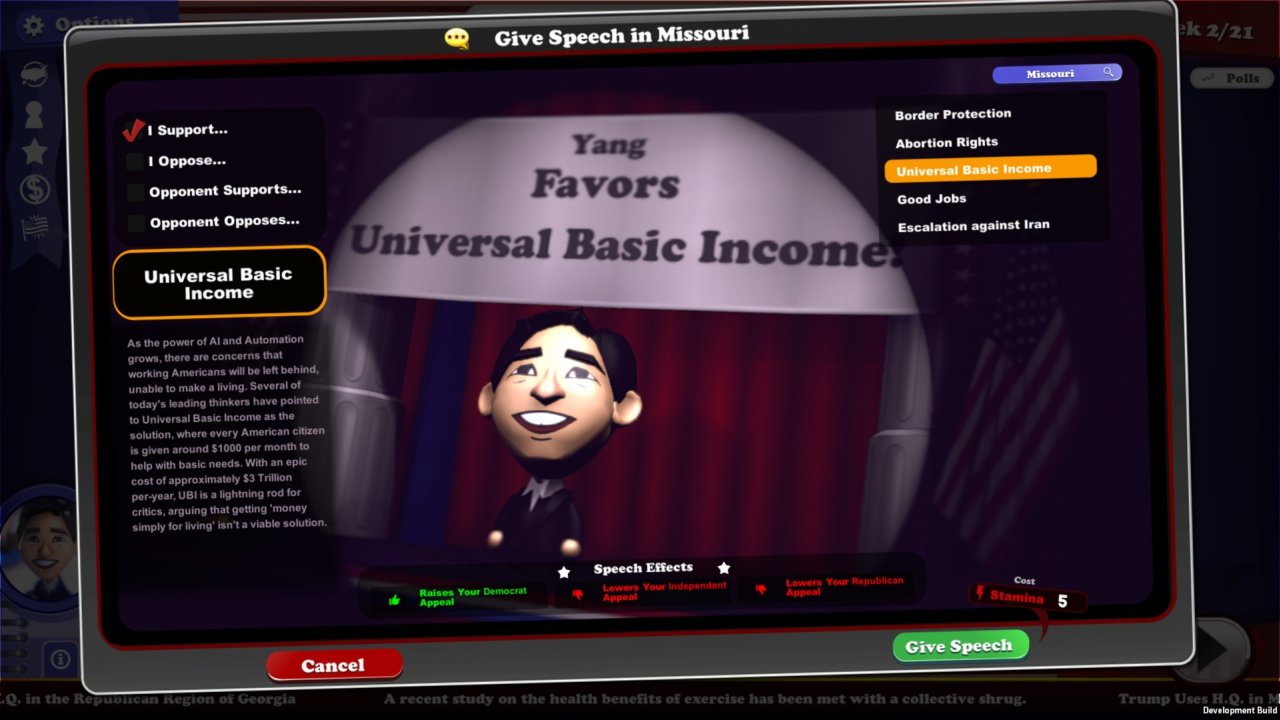 Just like the 2016 elections before it, the US seems poised for months of political commentary, dissection of every candidate's choice of words, and general anxiousness about what's to come in November. The Political Machine 2020 lets players live out their own reality and get the results they want, while keeping at least the states and issues fairly realistic. The mechanics, however, are fairly shallow, and there seems to be a number of steps back from the 2016 version - aside from the improved visuals. If you're in the mood for political tinkering, it's not a bad option given the relatively low price, but you get what you pay for, and it's not great value for owners of the previous edition.

Our ratings for The Political Machine 2020 on PC out of 100 (Ratings FAQ)
Presentation
70
A decent art style that fits the lower asking price, and one of the few improvements over the previous version.
Gameplay
65
While the game tries to remain grounded with its issues and candidates, the moment to moment gameplay grows repetitive, and the lack of content compared to its 2016 edition is apparent.
Single Player
65
The main campaign is interesting to try a few times, but it lacks content and customization to make it highly replayable. The AI vs AI mode is pointless.
Multiplayer
50
There is nobody online, so ensure you bring a fiend. Lack of local multiplayer is a severe miss.
Performance
(Show PC Specs)
CPU: Intel Core i5-4670K @ 3.80 GHz
GPU: ASUS Radeon RX 580 8GB
RAM: 16GB DDR3
OS: Windows 7 Professional 64-bit

90
No issues
Overall
65
The Political Machine 2020 doesn’t really capture the magic and madness of the US presidential race. It looks better, and can offer a few rounds of strategic election planning, but on the whole it’s a bit dull and lacking in variety compared to the previous version. 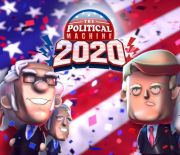