A decent foundation can't prop up the dull mechanics

Tower defense games have a great mix of mechanics. The addicting progression systems, the RPG-like improvements to your defense structures against the overwhelming foes, the often satisfying act of getting your own hands dirty and directly eliminating some larger bosses. This melting pot of genres has often produced some engaging and highly repayable experiences, but it was also subjected to plenty of low effort mobile-focused clones. Taur is the newest entry in the genre, offering players a literal tower to defend against foes arriving from every corner of the screen. While it has a few decent mechanics, the repetitive and unsatisfying action leave this alien planet without much hope. 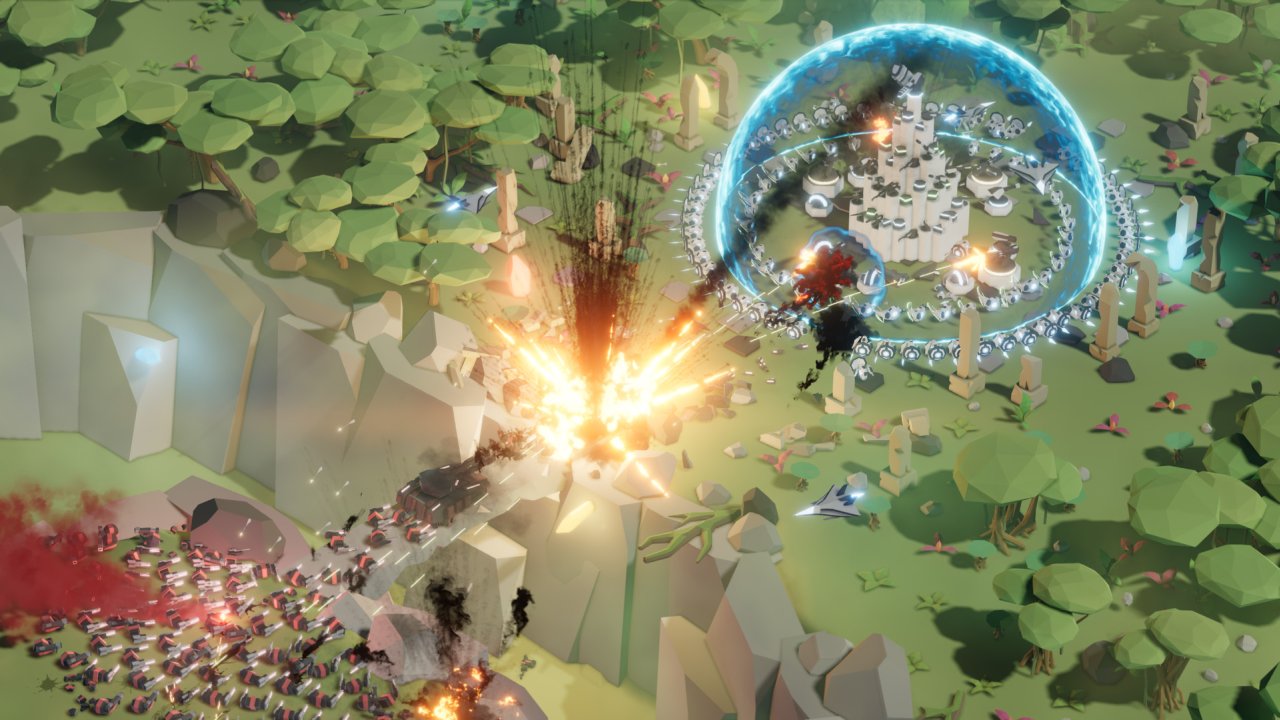 As with most games in this genre, the narrative here serves the minute purpose of stringing the missions together. The campaign takes place on a planet called Taurea. Some briefing text informs us that the planet is home to an advanced robot civilization, who refused to give up their technology to a warmongering Imperion nation that's been sweeping across the galaxy. For one reason or another, they turn to you, a human, to guide their survival on this final stand. You're tasked with fending off daily attacks from the invaders by using a single mobile defensive structure that can travel between different locations on the planet's surface.

To tie the narrative into the game somewhat, Taur has a meta-game in the campaign that shows how well your resistance is going. A simple meter starts off at 50-50 control of the planet, and as you win missions, the meter moves in a favorable direction. It's an attempt to create a sort of tug-of-war mechanic, and it works in the sense that you definitely consider more carefully which battles you pick.

The campaign is broken up into days/missions, where you can choose to engage in one of between 1 to 3 warzones. To help make your decision, you're shown the details of each battlezone choice – the enemy strength, type of mission, the resources you will get from victory, and also the effect the battle will have on the planet control. Since you can only pick one battle per day, the others are abandoned, which carries a penalty – however, apart from a few rare occasions, the total amount of points from victory offsets any negative points from abandoning the other two missions. If keeping the planet as secure as possible is what you want to focus on, you just choose to play the mission with the harshest possible penalty for abandonment. What you choose doesn't really affect the campaign otherwise, as all missions seem to be entirely randomly generated, thus also introducing difficulty spikes. 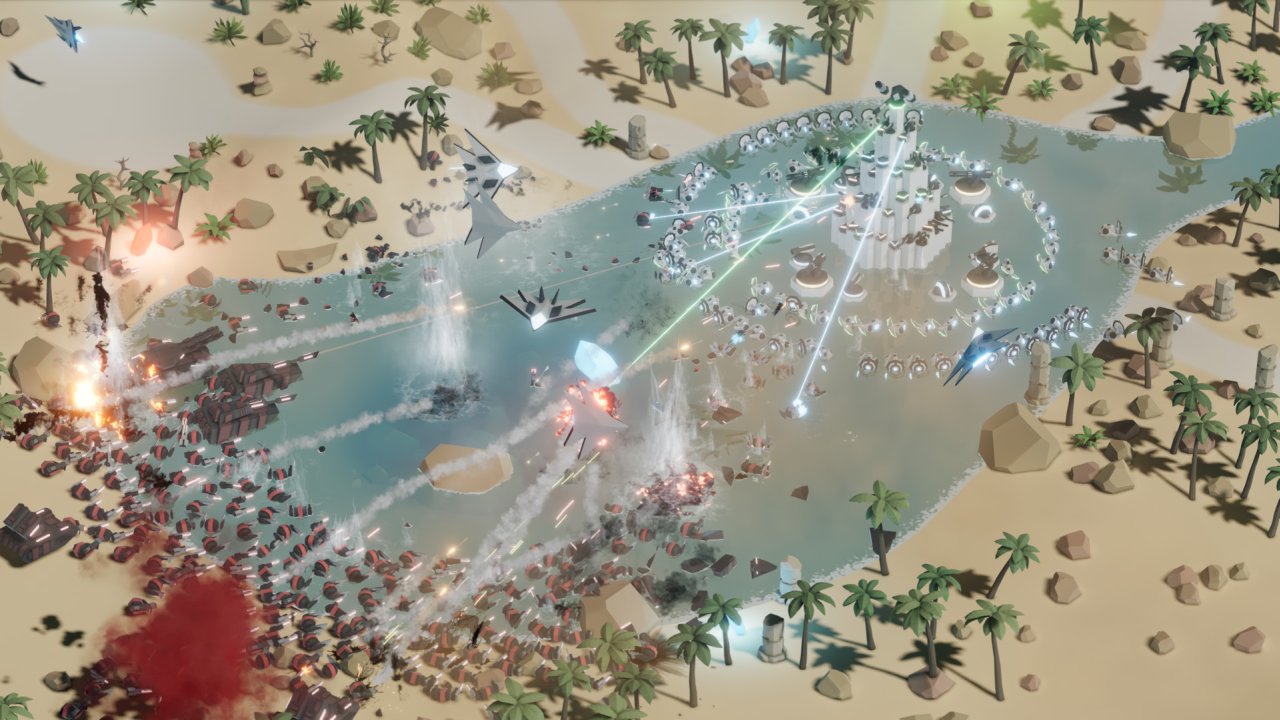 Each mission consists of your main Prime Cannon landing in the center of the map, and waiting for enemy forces to start rolling in. This is a (literal) tower defense game, as you try to shoot incoming enemies from your central position. The controls seem somewhat responsive, however the action itself is not very satisfying. For one thing, the cannon frustratingly lacks precision, so it's only best used as a single-shot sniper rifle. Shooting semi-auto results in tons of misses, and even then you can only fire three shots before having to reload. You also have a secondary indirect fire mode to lob some explosives. But these explosives have a small radius and enemies can randomly just walk right through them. As such, the actual act of shooting down enemy forces is rather unsatisfying, and you'll be doing it a lot over the 30+ day campaign. You do at least get to unlock some abilities that help affect the battlefield on the whole, so you feel at least a bit powerful.

But as any tower defense game, you don't have to (really, won't be able to) do it alone. At any time, you can bring up a build mode, which presents you with a hex grid that surrounds your main tower. Here, you must first purchase a hex space, and then purchase a building to place on it. These buildings either host friendly additional turrets of various types (short/long range, direct and indirect fire, etc), or allow minion robots to spawn. Your support crew includes melee robots, ranged robots, and an assortment of aircraft. The friendly minions appear at the start of battle, but you don’t get any more after that, unless you purchase an additional building.

As the battles heat up, things can get a bit chaotic, but if you choose to play missions with a lower enemy volume, it remains quite manageable. The AI is very basic for both sides, so you'll be doing a fair amount of heavy lifting to ensure things don't go sideways. The melee units especially leave much to be desired, as they can only seemingly engage one or two enemy bots each, while the rest stand around. The combat takes place on a variety of maps, which do begin to repeat fairly quickly; from a desert to a snow covered forest, to a green pasture in the mountains. There is some potential for interesting enemy approach paths that let you pick them off before they get within range, but these ideas are rarely utilized, and in most maps the enemies simply stream directly towards you unobstructed. The different battle types include air raid (when enemies are mostly all airborne), wave-based from different corners of the map, and the toughest - random continuous enemy spawns all over the place, which really test your patience with the friendly AI and creates the most amount of chaos. 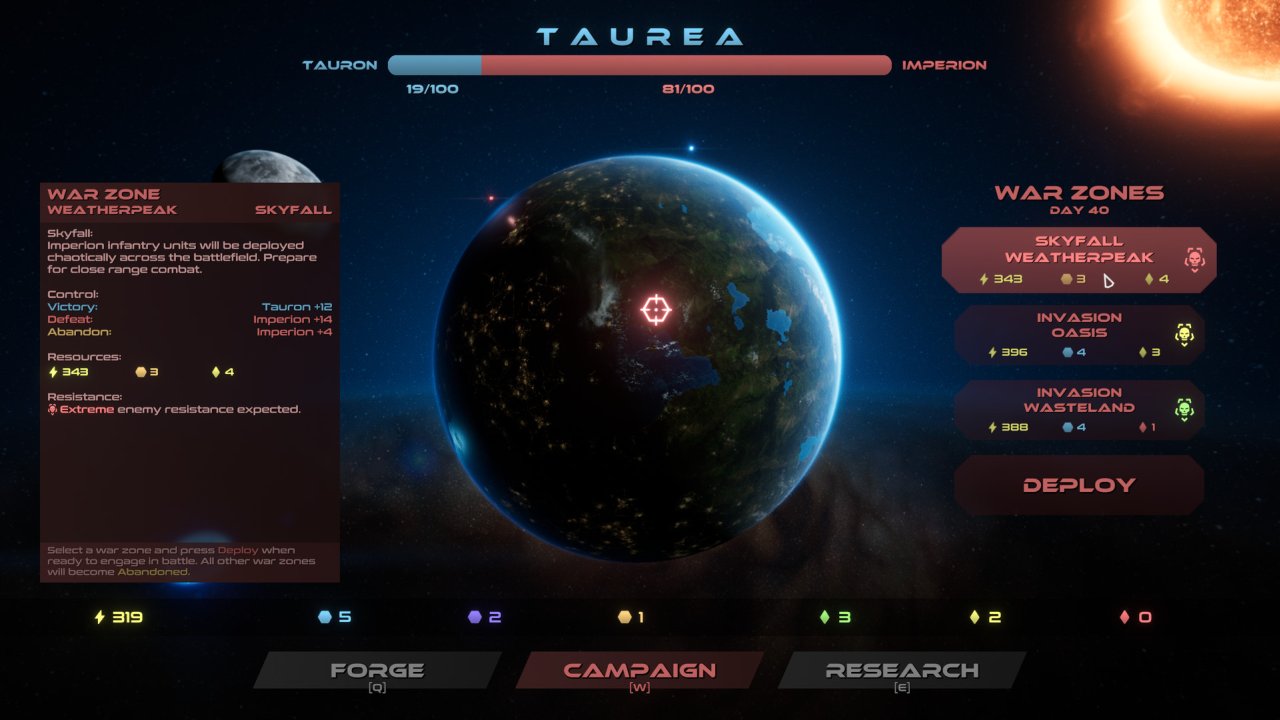 Should you prevail, mission rewards also include a variety of resources that act as currency for different actions. For example, unlocking new Hex grids (which are permanent) needs one type of currency, while researching something in the tech tree requires another. Speaking of the research tree, it's a straightforward approach to unlockables. It's here that you pay out to gain access to new buildings (and the units they spawn), as well as boosting the abilities of your robot army, from shield regeneration to extra armor and attack power, or spawn numbers. You can also unlock new primary and secondary guns for yourself, so you can replace the default triple-shot with a continuous laser beam – but it seems to miss just as much and the damage output is comparable.

One totally throwaway mechanic is the Forge, where you can spend Power in order to randomly adjust the power of your main tower weapon. With each roll, the potential max and min damage power limits change, and your new attack falls somewhere in the new range. You could get lucky, and get a great improvement, or you can drive your damage into the ground. You can do this action for all the main tower weapons you've researched. But it just feels like a waste of resources.

All the various resources have their use in upgrade trees and so on, but by far the most important of all is Power. This cash-like resource is your lifeline in Taur, because without it, you might face a series of setbacks from which you cannot recover. First off, Energy is needed to purchase new research in the tech tree. But more importantly, it's used to construct additional buildings on your hex grid around the main tower. However, these structures are not permanent – they can and do get destroyed, which means in the next mission you're starting with a weak or entirely blank slate. If you don't save an incrementally large amount of Power as you progress through the campaign, one bad mission where you lose the majority of your defenses can spell the end of the journey, as you simply won't have enough cash to rebuild. It puts you into a vicious cycle of trying to survive a situation that may not be recoverable, with mission payouts that are random and pretty low, especially later in the game, so the best advice is to always have some Power stockpiled. 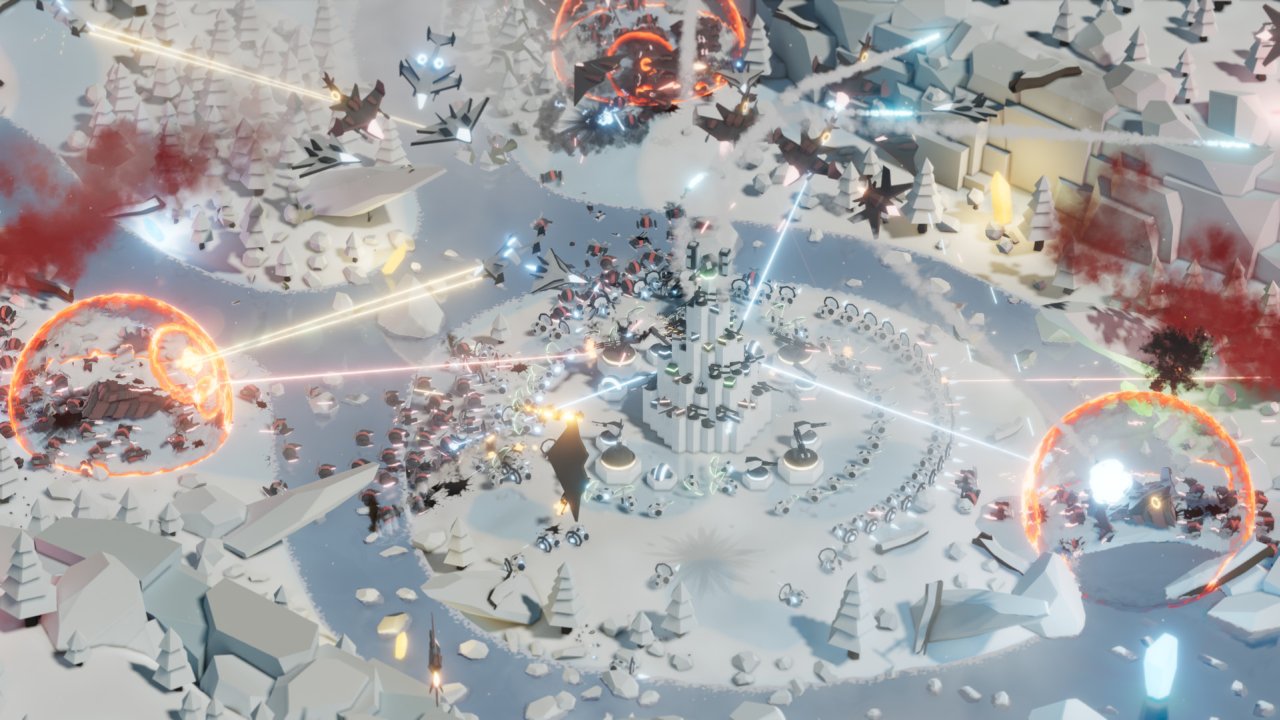 Taur has a fairly solid foundation and decent ideas, but it doesn't really evolve beyond that. For one, everything you've seen in the first 10-15 battles just begins to repeat itself. The maps begin to repeat, enemies all remain the same. Heavily investing in aerial units helps because, apart from air-raid missions, the game rarely has flight forces. The campaign descends into a bit of a dull grind as you complete battle after battle with no narrative or changes to keep you motivated. The combat itself feels static because there are no bonuses for how well you do personally, or how your minions do, etc. As long as you survive and win, you get the predetermined resources. Speaking of, there's an excessive amount of resource types that could have been trimmed down.

The presentation is clean, but leaves something to be desired. For a sci-fi action game, the soft and painterly art style doesn't seem like the most appropriate choice; it does look nice though. The colors are fairly vivid and the different environments - snow, jungle, ice lake - look okay, even as they severely lack in detail. The music is lacking, only appearing in the menus, leaving players to battle in silence; in combat, explosions and audio effects are rather straightforward.

Taur has a respectable enough gameplay foundation, but it doesn't really do much with it. The campaign meta-game is easy to abuse as you simple choose the battles that carry the biggest penalty for abandonment. Since the mission parameters seem random, the secondary deciding factor is how much Energy they offer, as stockpiling that is key to late-game survival and rebuilding. Unlocking new towers and units along the way, and boosting their strengths does satisfy. But sadly, the battles never evolve beyond the basics, and your direct control of Prime Cannon never becomes enjoyable. If you're wanting something new to play in the tower defense genre, Taur is a decent option, but that's about it.

Our ratings for Taur on PC out of 100 (Ratings FAQ)
Presentation
65
A sci-fi setting that opts for a colorful and painterly art style, which doesn't always fit. The music only plays in menus, and the combat sound effects are rather basic.
Gameplay
55
Despite the addicting nature of the genre, building up your tower's defenses is a gradual process that can feel dull. The shooting mechanics are imprecise and unsatisfying. The enemies grow repetitive quickly and lack variety.
Single Player
70
The metagame of controlling the planet is easy if you pick the right warzones every day. There are too many resource types, and Energy is by far the most valuable. Again though, if you stockpile a reserve, no setback is too great.
Multiplayer
NR
None
Performance
(Show PC Specs)
CPU: Intel Core i5-4670K @ 3.80 GHz
GPU: ASUS Radeon R9 280X DirectCU II
RAM: 16GB DDR3
OS: Windows 7 Professional 64-bit

90
No issues noted
Overall
60
Taur has a few exciting moments and addictive progression elements to get you far into the campaign, but repetitive design, uneven difficulty, and unsatisfying combat eventually wear out its welcome. 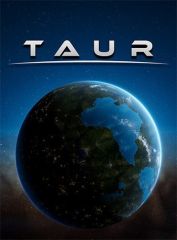