A dull conversation among strangers

I go back sometimes and read my old work. I read old short stories that I wrote, half-written novels and first-draft screenplays. I don’t write as much as I used to, largely because it doesn’t bring me much joy these days, so I find myself going back further and further. Here’s the play I wrote five years ago, ten years ago, fifteen years ago. I do this because sometimes it’s fun. You should always write what you want to read, so I’m the target audience for a lot of my work. But it also keeps me humble. I go back and read some of my work from my teens and it’s just awful. The dialogue was written by someone who has clearly watched a lot of movies, played a lot of games, and read a lot of books. Someone who’s studied how people in fiction talk, but who hasn’t mixed it with real life. Someone who knows that a scene needs drama, but doesn’t understand how relationships work or how to translate the pain/joy of life into narrative. 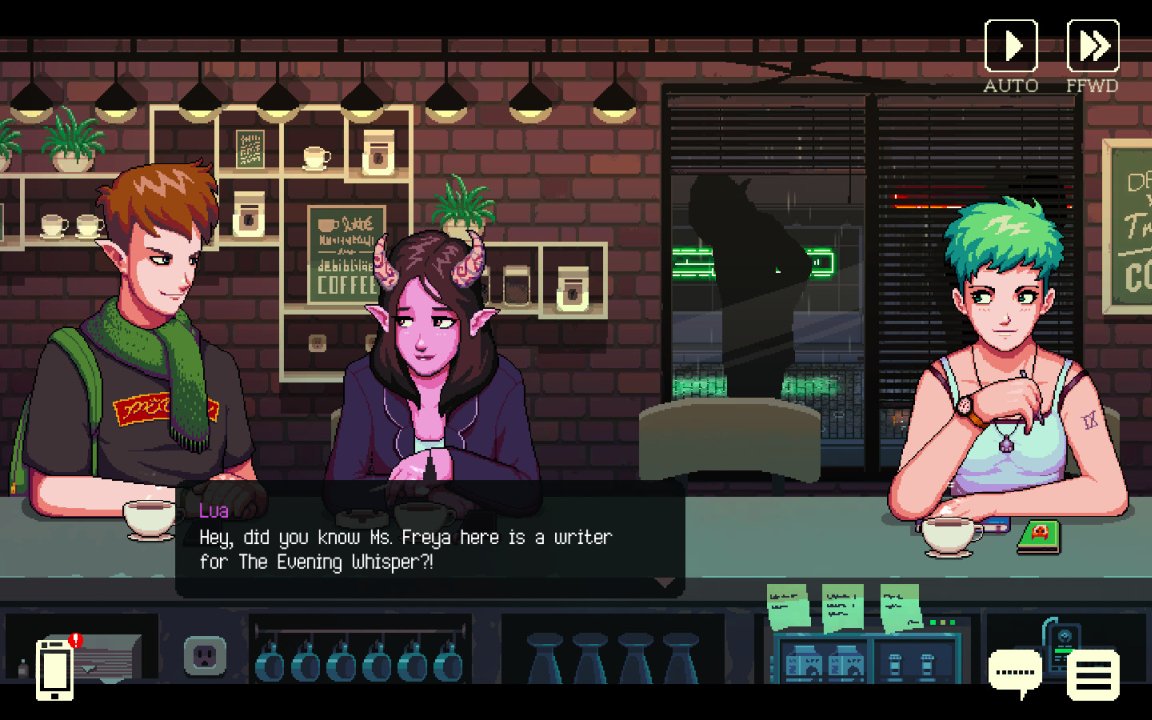 That’s the problem with Coffee Talk. The title understands that it needs to have characters and that those characters need to have conflict, but it doesn’t know how to make those characters talk to each other in a believable way, or how to make the conflict interesting. The breakout title for Toge Productions is a visual novel, broken up with a coffee-making mini-game, that tells the story of a night-time coffee shop and the customers who frequent it. It’s attempting to be a slice of life, but there’s very little life to it.

The game is set in alternate-dimension Seattle in the year 2020. But this version of Seattle is filled with sentient fantasy creatures who all exist within a modern-day society similar to our own. Elves, Orcs, Vampires, Werewolves, and Demons hold down jobs, pay rent, and (occasionally) drink coffee. The character with the most screen time is Freya, a fairy journalist attempting to write her breakout novel. She’s joined by a cast that includes an elven and succubus couple, an orc game developer, a vampire model, a nekomimi (cat-person) pop idol, and more. The many characters take their turn sharing the spotlight as their personal conflict is introduced, messied, brought to an all-is-lost moment, and then resolved in the coffee shop. There’s an elven hipster and succubus business-woman who are going through relationship troubles, an Atlantian merwoman who's trying to get into game design, and a werewolf dealing with PTSD. There are no dialogue options or any control over the narrative, things just play out in front of you and you watch it unfold.

There’s a little world-building, presented in a newspaper you can read in-game, but it’s all rather lazy. The game loves slightly changing the names of real-world events. For instance, the music festival the pop idol headlines is called “Couchella”, the game expo happening in Seattle is called “Max West”, movies are produced by the “Weirdstien Company”. I was honestly surprised the president wasn’t named “Ronald Grump”. 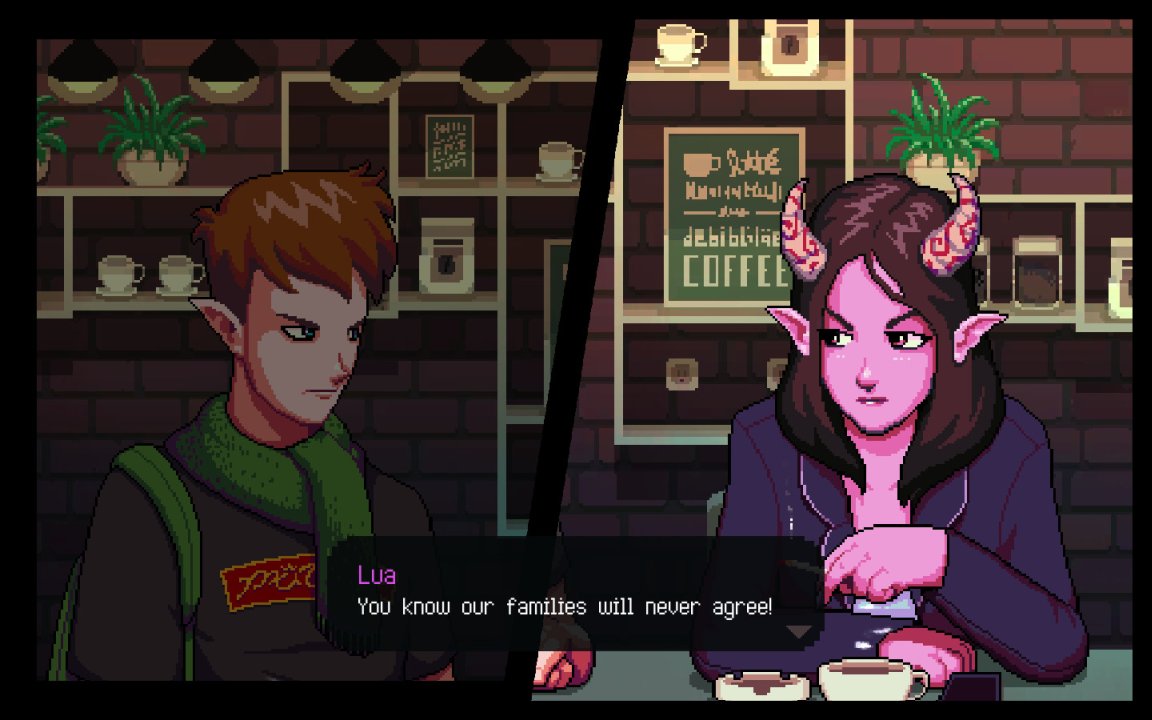 It’s all kind of cringey. The ham-fisted character interactions, the immigration allegories, the dialogue that always ends with a beautiful bow on it. None of it sounds like people talking, none of it looks like the kind of human interactions you would recognize. It all just constantly feels like doing homework as you scroll through endless text on the screen, stopping one-in-a-while to take a coffee order, wondering when something interesting is going to happen.

There’s not much gameplay to Coffee Talk. It’s more visual novel than anything else. Occasionally, customers will place orders while they deal with their drama and you will have to make those drinks. Sometimes the guest will tell you the ingredients and the order to mix them, sometimes you’ll have to guess. If you mix milk with tea or coffee, you’ll have the option of making latte art, but it doesn’t have any effect on the game. If you get an order wrong, you’ll get a little chastisement from a customer, but there’s no fail state and things will just progress along without much acknowledgement of what you served beyond someone telling you it's not what they asked for.

There’s an endless mode where customers just keep coming in and ordering drinks, but the ingredients are so limited and the recipe list isn’t that extensive, so you’ll quickly grow bored. I’ve had my fill of the drink-making mechanic after playing the story. Ideally, it's here to give you something to do, but the gameplay is so obviously lip-service, that it almost feels patronizing. Why bother to learn the drink ingredients or perfect latte art if it doesn’t matter? Why is the barista necessary at all? It would be one thing if the main character was noted as the story-keeper of these people, but that job gets pointedly given to someone else. 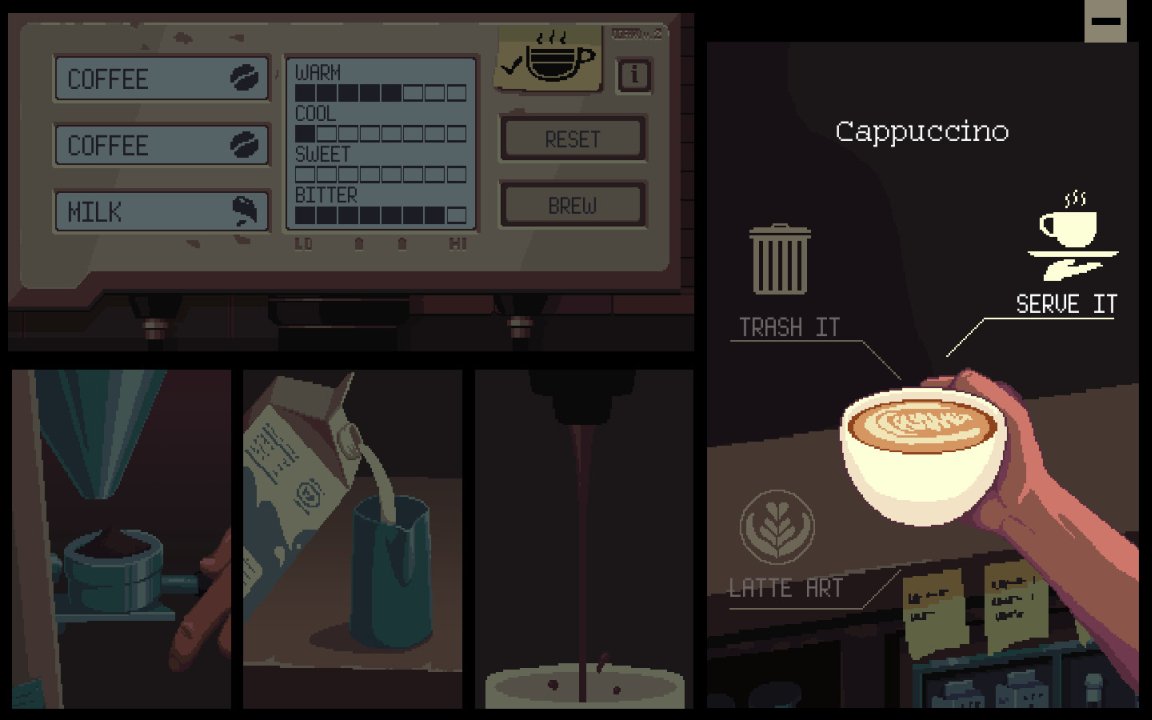 The pixel art looks pretty good. Aside from budgetary constraints, the game doesn’t warrant the aesthetic. In fact, some sort of hand-drawn artwork might have worked better, giving the fantasy world a strange storybook feel, but pixel art seems to be the answer when there’s not enough money to make something photo-real these days, so here we are. The rainy, grungy atmosphere does evoke a bit of a Seattle vibe. The chill, lofi soundtrack is good as background music; it suits the relaxed atmosphere of the shop well, though the game could have used something more dynamic for the highs and lows of the plot.

Playing on the Nintendo Switch, the game ran well. I had no issues with crashing or other technical issues. The loading times are quick, it’s a smooth experience from top to bottom.

I know that these are fantasy races, that this is a fantasy game, but it’s frustrating how unnatural all of the character dynamics are. People don’t take time to get to know each other, they only keep secrets by announcing they have a secret to keep, they deliver exposition like an opening title scrawl. You can visualize the writer’s outline of the individual plots as story beats play out on-screen. There doesn’t seem to be any imagination put into this game aside from, “What if D&D, but in after-hours Starbucks?” And that’s not a bad idea. But it needs a reason to happen. It needs an inciting incident, interesting characters who aren’t archetypes, natural dialogue, real stakes, and a better coffee minigame. I make it sound easy, but that kind of writing is hard - as I said, I know how hard it is first-hand - but without those elements you end up with lifeless story filled with lifeless characters, and that’s what we have here.

Our ratings for Coffee Talk on Switch out of 100 (Ratings FAQ)
Presentation
60
We’ve got some serviceable pixel-art, but if you feel this aesthetic has played itself out, this game won’t dissuade you.
Gameplay
60
The drink-making is alright at first, but it grows repetitive, especially a few hours in.
Single Player
35
The writing is supposed to be the star here, but it’s empty and lacking.
Multiplayer
NR
None
Performance
80
The game runs well and I had no issues.
Overall
50
As a visual novel, Coffee Talk relies heavily on its writing, but the characters and the plot are so dull, they offer you no reason to care. Instead of visiting this fictitious coffee shop, find a local one in the real world - you'll have more fun. 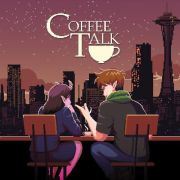