Point & click adventure games can be mentally exhausting. Solving their abstract puzzles is hard enough, before taking into account inventory, multiple connected screens with pixel hunts, and side characters that provide story and clues. There is plenty of room for adventure games that cut down to the heart of the genre. Chuchel, by Amanita Design, is one recent example that featured whimsical characters and playful one-off puzzles. LUNA The Shadow Dust takes a similar approach because it has no inventory and most of its puzzles are unrelated. It also has no text to read and no voice work either; the story uses hand-drawn animations and striking music to tell its tale. LUNA thrives on simplicity, but that does not mean all its puzzles are a push over. 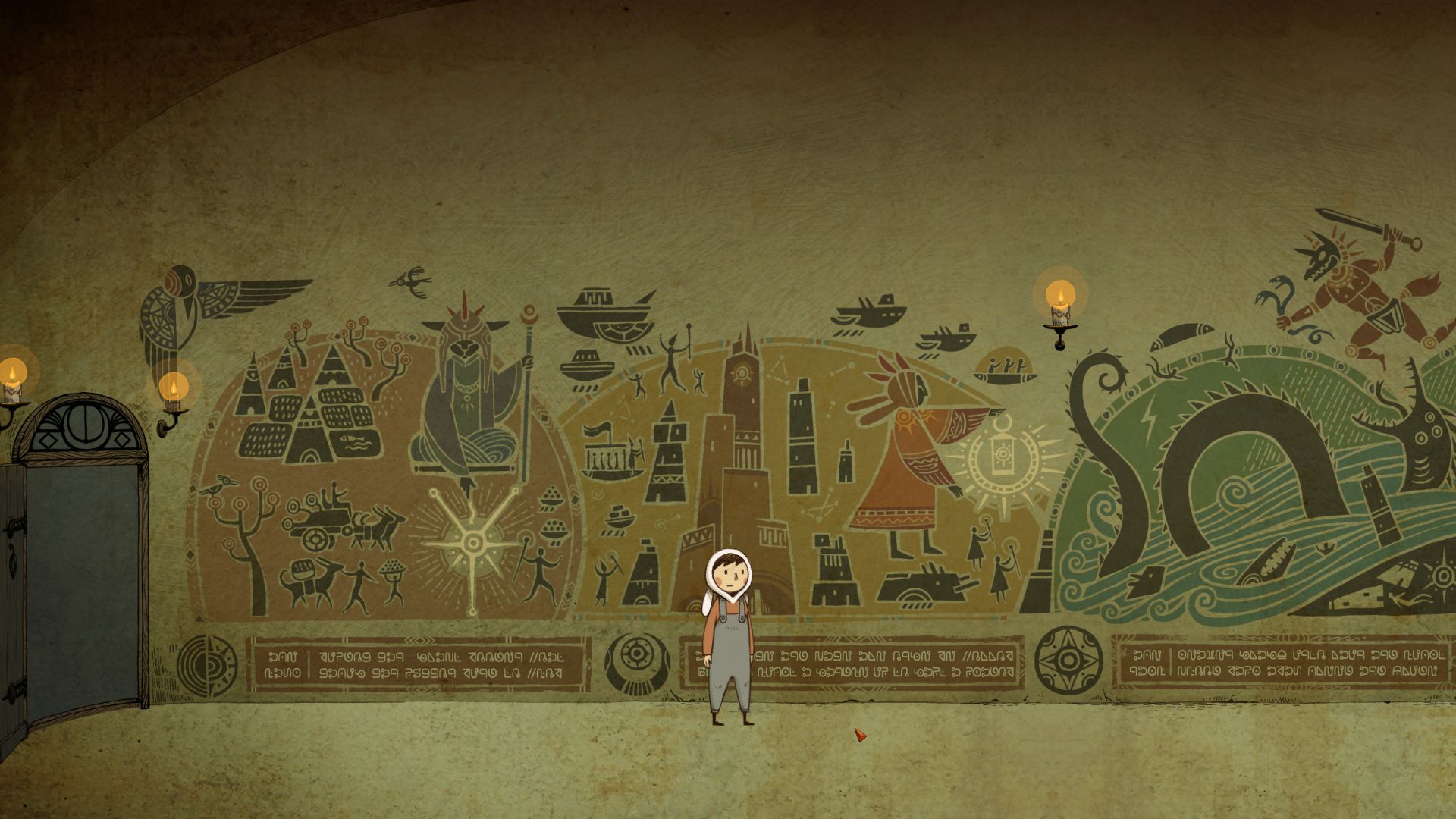 With no text or dialogue, the story in LUNA is distant and hard to describe. It begins with a boy falling gently from the sky and landing on a desolate stretch of land. Soon after the boy finds the entrance to an abandoned tower that stretches up into a black sky. He is compelled to enter and begins to ascend. Each level in this tower has a new obstacle (puzzle) to overcome. During the ascent, the vague story is delivered sparingly via wall murals and animated cutscenes. We learn that the tower is situated on a barren rock in outer space, between a world below and a moon above. But the moon is gone and the tower is linked to its existence. Darkness has taken over and the balance between light must be restored.

After a few easy challenges, the boy meets a small creature that looks like a cat that swallowed a watermelon. He rescues the rotund furball and the two set off together, heading for the top. They make a good team because of their different skills. Since the cat is small and agile, it can reach areas the boy cannot. Meanwhile the boy can use switches and move heavy objects. In keeping with the theme of light and dark, the cat is able to become a shadow on the wall and hop to places that seem out of reach. The boy can move lights to create platforms, or become a shadow himself so the cat may leap higher. Puzzles involve switching between these two characters and jostling them into the right position. The dichotomy is simple but effective.

Most puzzles are single screen scenarios where the duo must exit the door to get to the next level. Usually there are only a few interactive items—buttons, valves, boxes, ladders—and it’s a matter of clicking them in the right order. In one level, the boy must twist some valves so the cat can climb atop a retracting mechanism and escape the room to open the exit from outside. Fast switching between the two characters is needed for this puzzle (via spacebar) but it is usually not required. To save even more time when experimenting, characters will continue walking after switching, allowing repeated tasks to be performed faster. 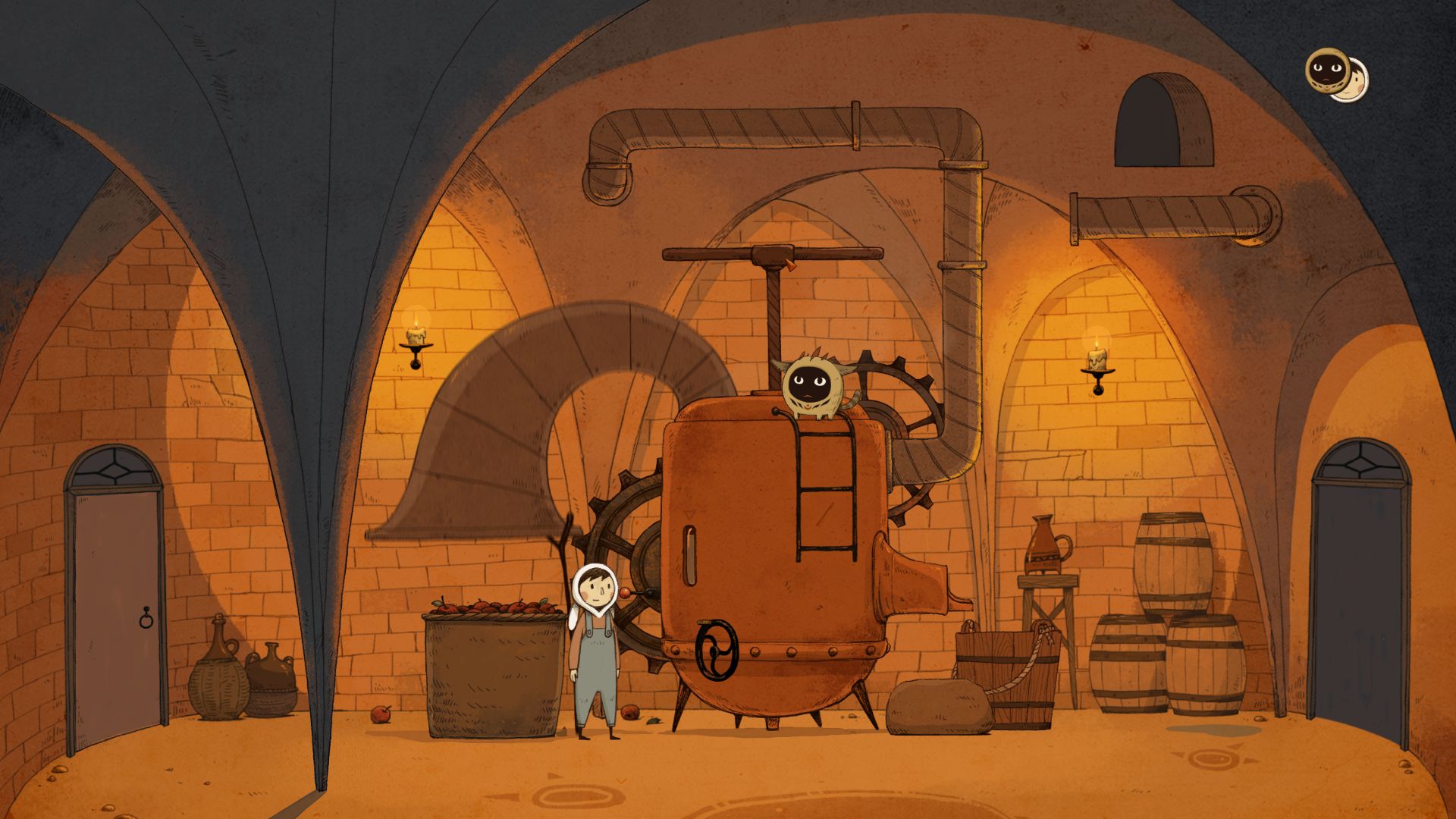 Since there are few things to interact with, many early puzzles can be solved with trial and error. These challenges are brisk and make for rapid progression. Still it can be fun to experiment with different outcomes, like when feeding a rat various types of food to make it expel either fire, water, or wind. None of the puzzles are too random or illogical. Symbols are found in the environments and they often linked to puzzles. Just interacting with things will yield outcomes that can be deconstructed.

When the game gets a bit more abstract, the puzzles get better without losing their logic. After the boy clumsily navigates across some floating space rocks with a light-boat, the complexity increases and obstacles take longer to overcome. These later puzzles feature connected screens. The best ones have the boy and the cat on different sides of the same challenge. The garden puzzle is fantastic because it takes a landscape and reproduces it four times to represent each season. Then the duo must pollinate a flower in one season and grow a fruit in another. Switching between characters in different viewpoints and tinkering with the mechanics is rewarding. It is just a shame there were not more of these split puzzles in the later part of the game. 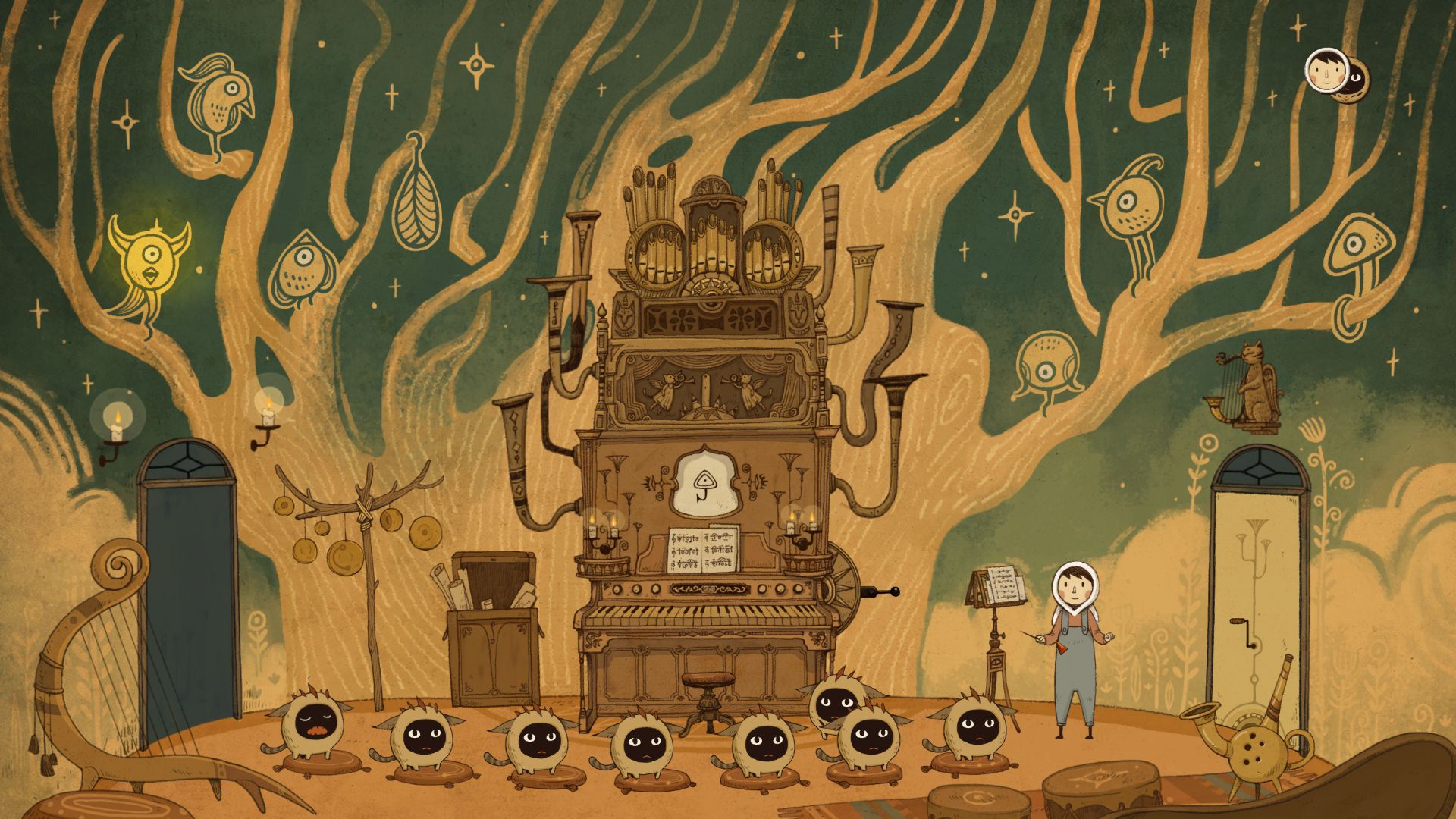 The hand-drawn world in LUNA is striking and is presented in high definition. It could find an audience as a feature-length cartoon or TV series. Backdrops are detailed and its sharp outlines are similar to those in Machinarium. Yellow and teal are the most used colors in the world, although the gradients are finely tuned. The characters are well animated, although their framerate is occasionally jittery. Prerendered cutscenes between puzzles are smoother and a nice reward as you progress, even if they zoom in on characters and have a suboptimal bitrate.

On equal footing to the visuals is a comprehensive soundtrack. Every floor in the tower has a different tune to match that level’s theme. The distinctive music uses a broad range of instruments—cello, flute, drums, piano, harp, and even a choir—and yet it manages to strike a familiar emotional tone throughout the three-hour game. There is a tribal aspect to the combination of sounds, which suits the setting. Tinkling notes with long pauses evokes wind chimes stirring in a breeze. As most levels are short, the music rarely has time to grow old—some tracks did get repetitive. Most of the music is calming, like the game’s early puzzles, making for a light point & click adventure. 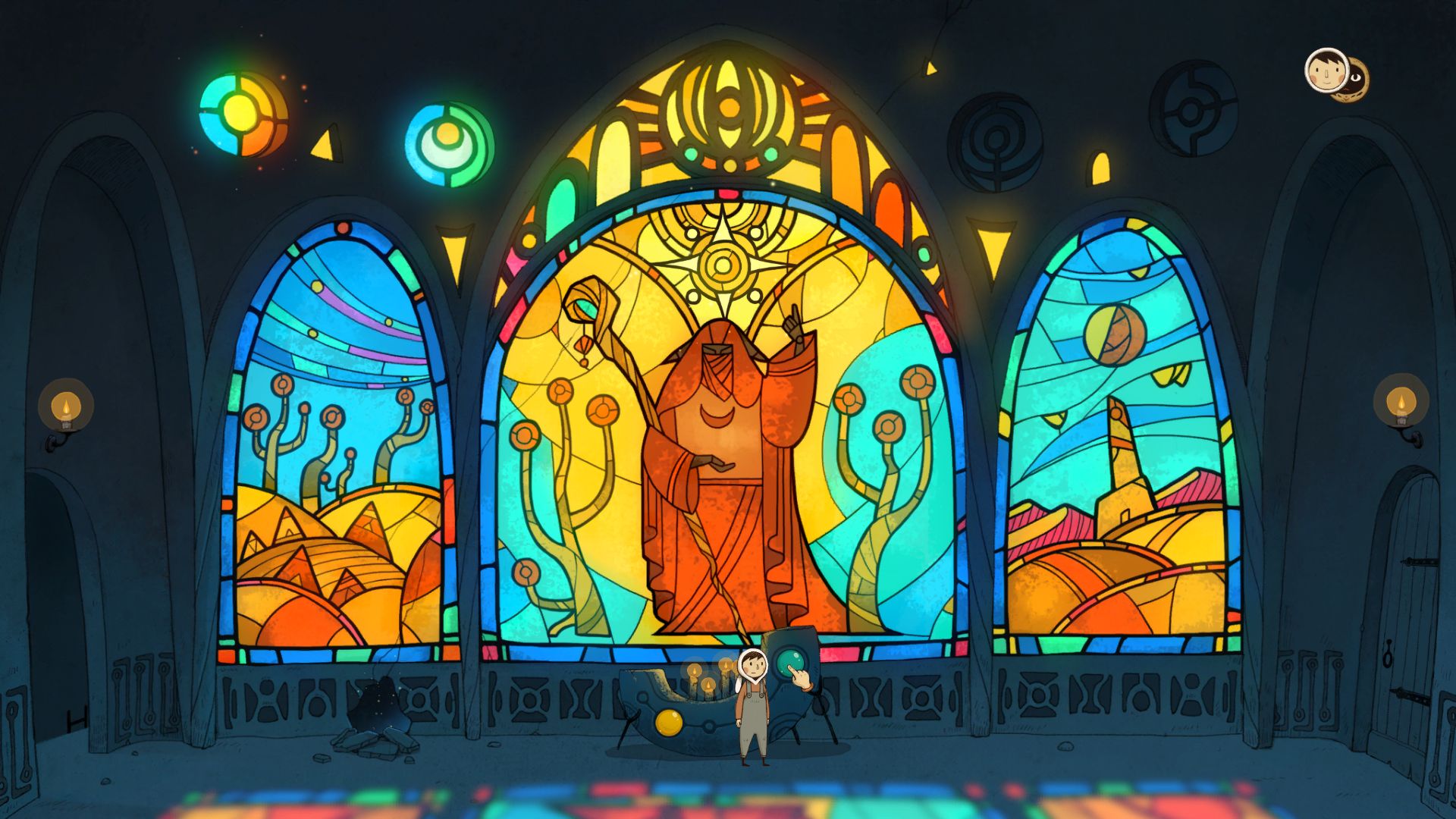 Even without its serene music and sharp visual design, LUNA would still be a decent point & click adventure game. It strips down to the basics of the genre by culling traditional storytelling and replacing it with voiceless cutscenes and painted murals. With no inventory and minimal backtracking, it puts emphasis on the raw puzzles that use two characters with complementary skills. While the initial challenges are easy, the later ones are clever because they split up the characters in interesting ways. If you are keen to return to the genre but daunted by the prospect, LUNA The Shadow Dust is a good way to get your foot in the door.

Our ratings for LUNA The Shadow Dust on PC out of 100 (Ratings FAQ)
Presentation
85
Excellent hand-drawn backdrops and detailed character animations. Music blends with each level and is quite relaxing and distinctive.
Gameplay
75
Initial puzzles are quick and simple, but some of the later ones offer a solid challenge. The use of the two characters works well for most of the game.
Single Player
65
Told without text or dialogue, the story and background information is presented vaguely with wall murals and cutscenes. Its unconventional style will cross language barriers but is hard to fully comprehend.
Multiplayer
NR
N/A
Performance
(Show PC Specs)
CPU: AMD Ryzen 5 3600
GPU: XFX RX 480 GTR Black 8GB
RAM: 16GB DDR4
OS: Windows 10 Pro 64-bit

95
No performance issues.
Overall
76
LUNA The Shadow Dust is a streamlined point & click adventure that offers superb art design and peaceful music. While many of its puzzles are simple, some late-game challenges make fantastic use of the two well-animated characters in a brief tale told adequately without words. 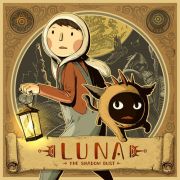