A tablet in time

In order to appreciate the progress we’ve made, it often helps to look back. It’s a common concept in the technological era, where the pace of change is near exponential. It’s also a concept that’s neatly packaged in Kunai, a game where a happy little iPad nondescript tablet becomes a ninja warrior. It’s an archetypal dystopian science fiction story (perhaps minus the ninjas) - an AI goes rogue and attempts to vanquish humankind. Running out of options, humans transfer their consciousness into machines and forge a robot resistance. It’s up to you, the hero of the story, the aforementioned happy tablet, to save the world. 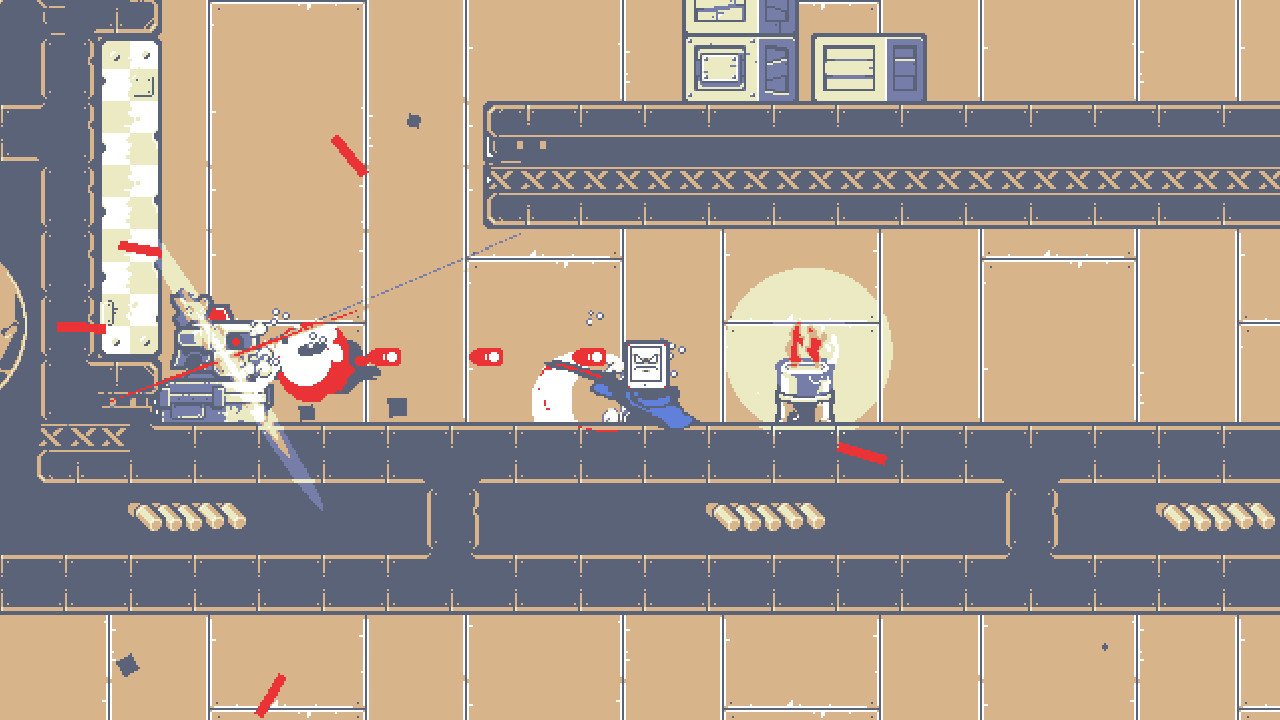 If the premise hadn’t convinced you that Kunai harks back to pre-2000s sci-fi, its design should do the rest. Characters have CRT monitors for heads (you know, the ones that are an actual three-dimensional shape, rather than a razor thin screen). Mice scurry across the floors, dragging their power cable tails in tow. Routers - the game’s upgrade stations - make that distinctive “blip blip blip bzz bzz” sound speakers used to make when you received a text. The color palette is a wash of blues, beiges and greys, your adventure accompanied by a boppy synthesised soundtrack. And your tablet makes faces like >=[ and =3.

Kunai establishes a quirky and exciting premise but fails to move far beyond that. The same is true for the gameplay - a metroidvania with a fantastic moveset at its core, but little innovation along the way.

So, Kunai is another metroidvania in an ever-growing list of metroidvanias. The game at least seems aware that it’s competing in a saturated field, wasting no time before handing you your katana and kunai. In typical metroidvania fashion, more items unlock as you go - like the shuriken and SMGs - but none offer quite the same satisfaction. Your katana slices through enemies and reflects projectiles with quick shings of your blade. Your dual kunai act as grappling hooks, letting you swing left and right across the map. They take some practice but once you hit a rhythm it's immensely gratifying, using your momentum to glide effortlessly from rope swing to rope swing before raining down on an unsuspecting enemy with downward katana strikes. 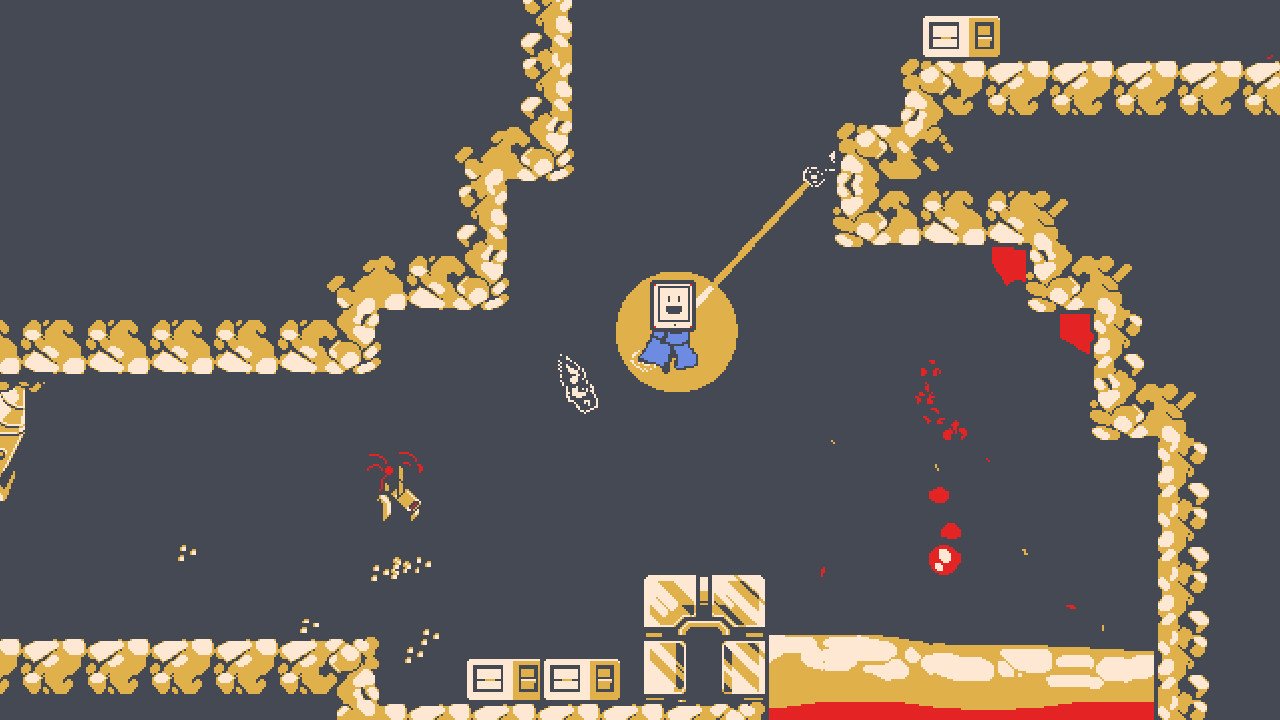 When you’re on a roll, Kunai makes you feel as unstoppable as any high-tech ninja should be. Progression is again standard for the genre, with new weapons and abilities helping you reach previously inaccessible areas. This makes the journey to each of Kunai’s distinct areas a lot of fun, often fighting new enemies along the way. Too often, though, you have to go back to go forward. You must regularly return to the resistance base and there’s little by way of variety to make those return trips interesting, causing me to swing past enemies rather than bother fighting them. While kunai traversal remained fun, the inclusion of fast-travel could have kept the game feeling fresh for longer.

There is one addition in particular that reduces Kunai’s pacing to a crawl. I would like to point out that I do not hate the concept of auto-scrolling, which is an effective way of increasing difficulty in 2D side scrollers. In Kunai, however, the mechanic is so infrequent and inconsistent that it seems unnecessary. There are just three instances of auto-scrolling. The first two move the screen forward so fast that you can barely react in time. The third inches the screen upwards as a death wall rises from below - leaving me stuck at the top of the screen, unable to climb higher or see what’s above me. In all three cases, my only method of progression was to die over and over until I memorized the map’s layout.

One silver lining is that dying in Kunai holds no consequence. You respawn at your last visited checkpoint without losing coins or progress. Checkpoints are frequent, too, so multiple attempts can raise your coin total significantly. Of course, the real silver lining is that the auto-scroll feature should be a straightforward fix: tweaking the speed should resolve the issue. 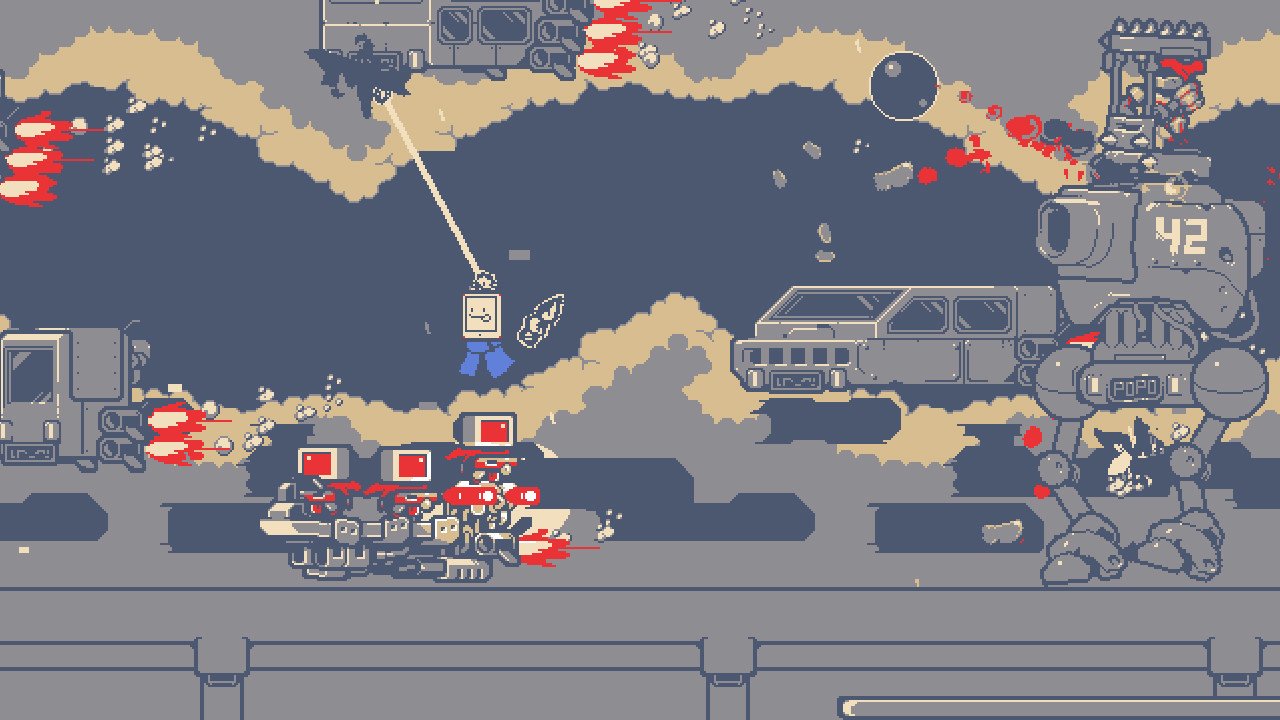 Kunai bolsters a standard metroidvania affair with energetic movement and retro visual appeal. Even with its short runtime, though, there is a noticeable lack of innovation and depth. Kunai feels more like an app you download and delete a few days later, not one that takes pride of place on your homescreen.

Our ratings for Kunai on Switch out of 100 (Ratings FAQ)
Presentation
85
Brimming with retro charm, Kunai’s design and animations look great.
Gameplay
72
There’s an excellent base but little to go with it. Item progression is standard for the genre but there’s little incentive to experiment beyond the katana-and-kunai combo.
Single Player
63
A fun premise with its share of humor, Tabby has a lot of character for a mute tablet-headed robot. As the story progresses, however, there’s not much that’s memorable.
Multiplayer
NR
None
Performance
90
Played on the Nintendo Switch with no notable performance issues in handheld or docked mode.
Overall
73
Kunai is a short and sweet metroidvania with an exciting premise. In this era of rapid technological change, however, Kunai ultimately doesn’t do enough to separate itself from the pack. 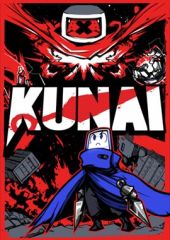