Plain puzzling across the penumbra

Light and darkness. Good versus evil. This simple conflict has been part of video games for decades. Not many games make darkness a threat in and of itself. Usually there is something inside the shadows, be it rats or bats, which must be repelled by using some light source. Lightmatter keeps it simple by making shadows deadly, and it forces players to jump over black silhouettes or shine lights to create pathways. It is a first person puzzler akin to Portal or The Turing Test, although the basic mechanics and dry story prevent it from matching its competitors. 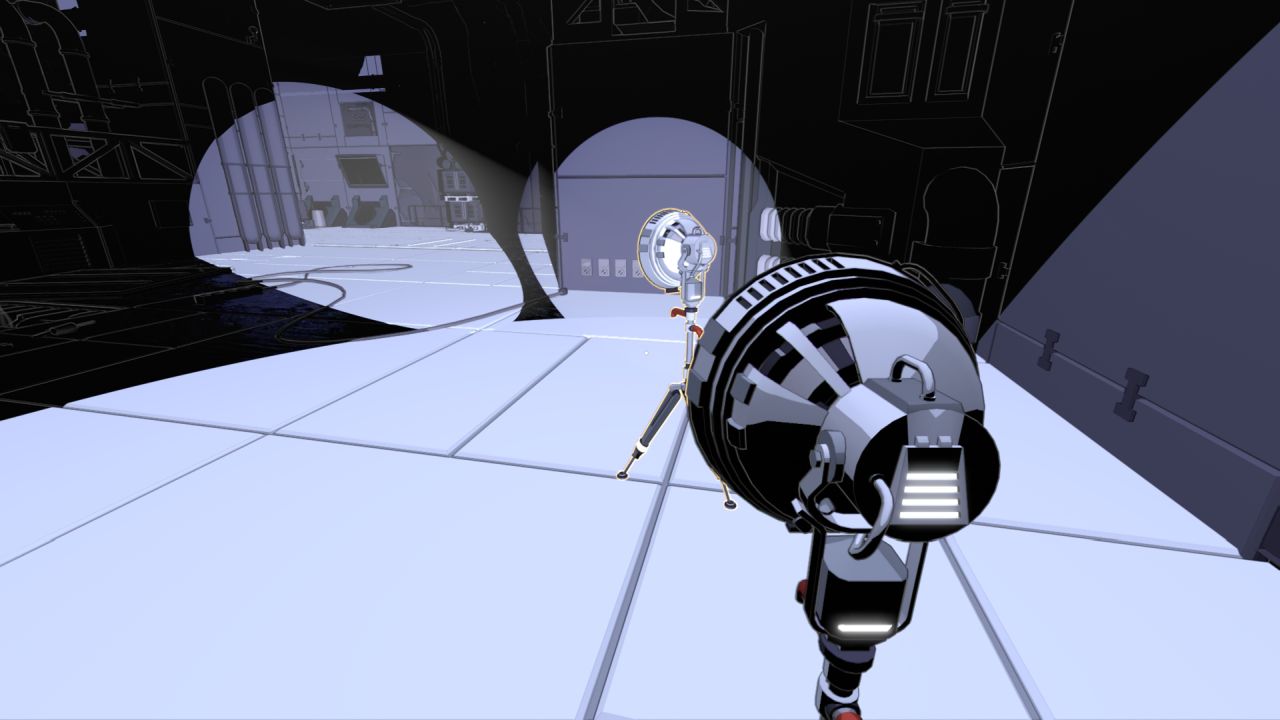 The game begins with the player waking up after a disaster has befallen Lightmatter Technologies. In the midst of launching their new energy tech to their investors, something went awry and now the underground facility is in shambles. Employees and guests have already been evacuated via the last train to the surface. You’re stuck in the facility alone. Well, not quite alone. The CEO, Virgil, is still around and he’s keen to get you on an elevator to the surface. But when that fails, you plunge down into the facility, deep in the mines where the special photon crystals were first discovered. The only way out is via a long detour, through caves and research labs. It sounds easy, until you step on a shadow and die.

Shadows will kill you, but only if you touch them. Jumping through a shadow is perfectly safe if you land in a lit area. Catch the edge of darkness and it might as well be lava. But this over-umbra parkour will only take you so far, because eventually there will be too much darkness to hop, skip, or jump over. This is when you’ll need to make use of lamps. These are simple and work like portable lasers, only they cast a cone of light that can be walked through. Often there is more than one lamp, and they might need to be brought together first before staggering them around. Moving lamps is easy but you cannot jump with them, so any gap in the floor requires a different solution. The goal is to make it to the exit of each area, highlighted by a green sign.

Getting through areas with lamps is not complex. Not many puzzles require deep thinking or many steps. In this way the game is a breeze but it also lacks those “aha” moments. Placement of lamps can be important but the cone of light allows a wide margin for error. If you leave a lamp behind there might not be a way forward. Some platforms are used to move lamps automatically and keeping track of their orientation can become complicated. The basic lamp device is rather simple but the game does an okay job with making them seem more involving. 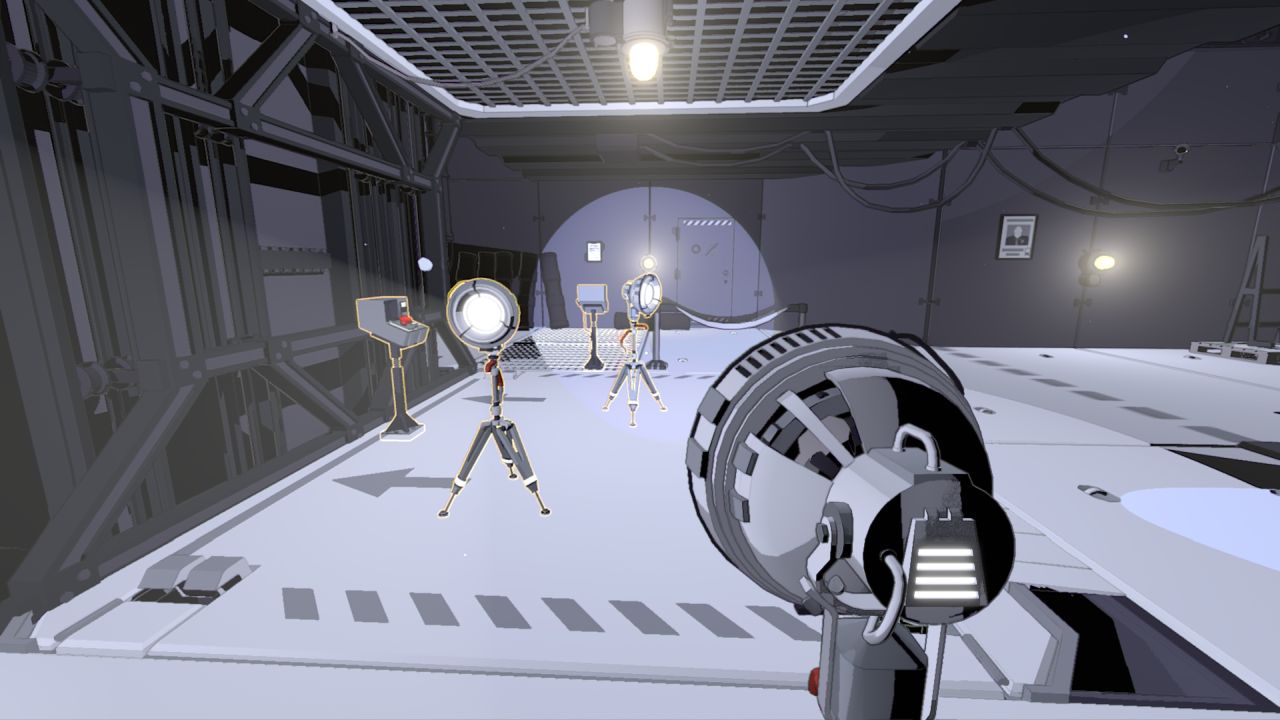 The CEO of Lightmatter Technologies is there to guide the player via radio for most of the game. Virgil provides context on the facility, the lightmatter energy, and some of the characters involved. He provides this info in dribs and drabs and is only ever seen as a shadowy figure in the distance. There are direct references to Portal here—the companion cube and turret can be found in one of the levels—which is one way of addressing the obvious comparisons.

Virgil chats away like GLaDOS from Portal, only he’s not that funny or clever. He is voiced calmly by David Bateson who has played a broad range of characters including Agent 47 in Hitman 2: Silent Assassin, Agent 47 in Hitman: Blood Money, and Agent 47 in Hitman Absolution. You might expect him to jump out of a wall, wearing a chicken suit, and begin firing silverballers. Sadly that never happens. Perhaps the best part of Virgil’s role is that he will occasionally say something cryptic about the task at hand, or at least it seems that way. The clues are not helpful but at least they make you consider his words. While Virgil tries to help you escape at first, the problem with the energy core cannot be ignored. The player is in a prime position to help contain the catastrophe. This means venturing into the secure research labs and getting your hand on more interesting technology. 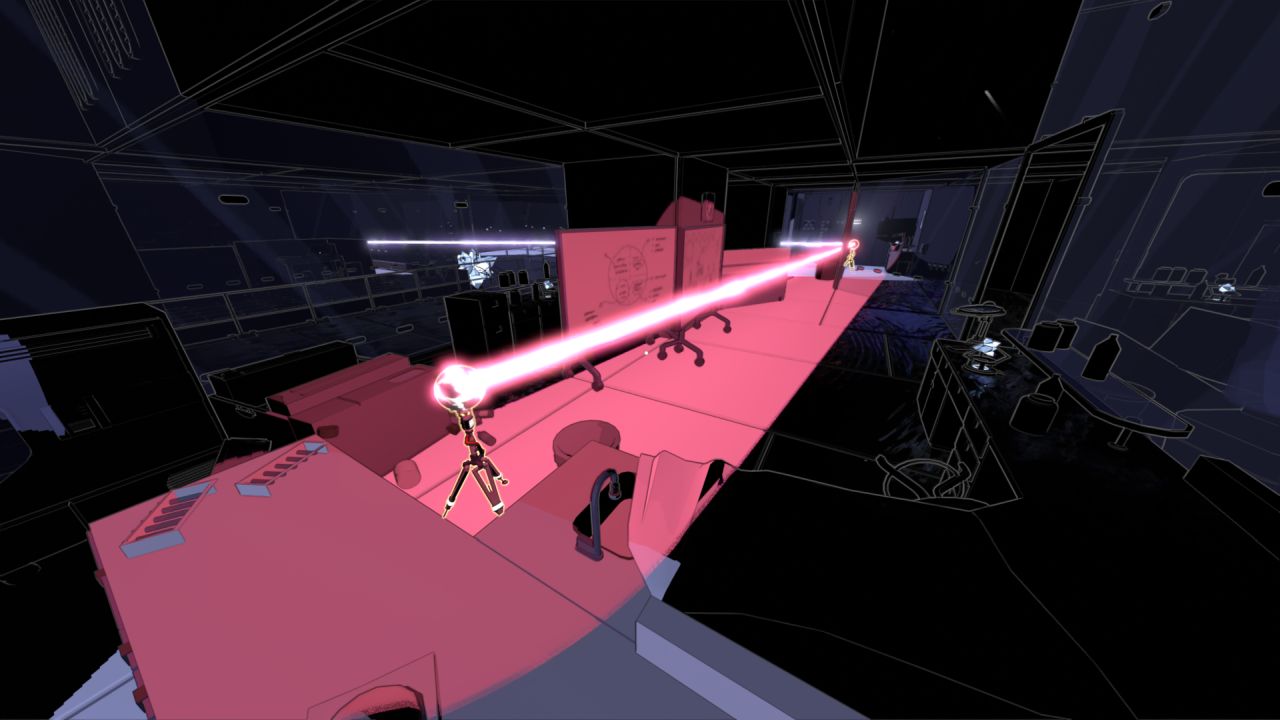 Photon connectors brighten up the room in the last half of the game. These are movable devices that create a thin channel of light back to a generator. They can be linked to one another, so it is possible to create light walkways and criss-crossing webs. The immediate area around the photon connector will also stay lit, so they can be carried around in darkness if line of sight is maintained. The connectors are more interesting than lamps although they also get clumsy. Looking at the linking connector is often required, but this makes it hard to see where you’re going. Moving in the wrong direction breaks the connection and leads to death. Fortunately dissolving into the shadows is not a huge punishment, as the game will revive you nearby with devices in a recent position.

Puzzles can break after you are revived. Some of the movable light tools floated in mid-air, just out of reach. And there are places where puzzles are broken via player action. One task was solved in a non-standard way, which unfortunately made a later challenge impossible. The game crashed a few times and stuttered before every new zone. Levels are a decent size, so restarting means doing tedious lamp/connector movements before you’re caught up again. 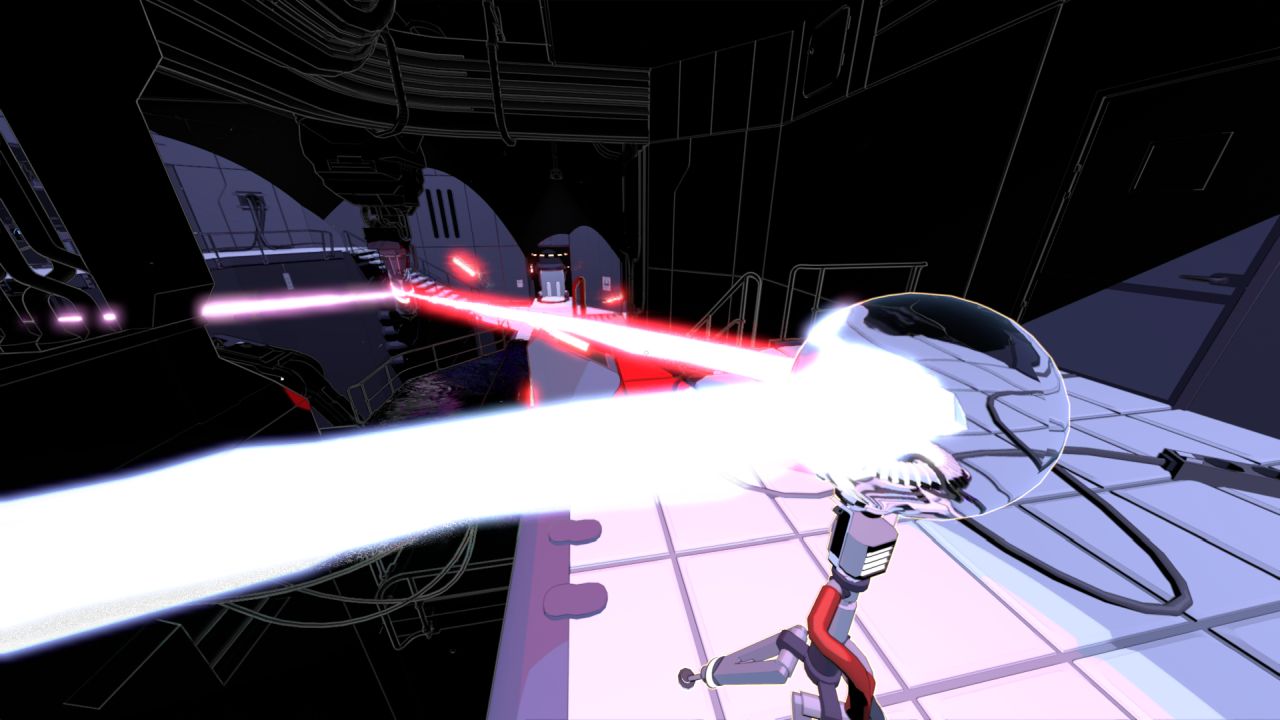 The good news is that the visuals are a treat. It features high-contrast environments with solid-color textures. The lit areas look like Void Bastards and this helps tremendously when navigating between dark and light. Objects in shadows have stencilled outlines, so you can easily identify routes and obstacles without needing to point lamps every which way. Most of the dynamic shadows appear accurate although some have ugly jagged edges, even on the highest visual setting.

Unlike other puzzle games, the levels are not classic white-box test chambers. These are more natural, resembling mining tunnels and laboratories. Navigating through glass-door offices using photon connectors is a jolly good time because it’s not typical of the genre. It’s a pity the textures are not more detailed so they could reveal more about employees. There are voice recordings from a secondary character that offers a darker view of the situation, leading to one of two endings.

The main ending in Lightmatter finishes with a flurry of platforming. Here the player’s insane movement speed might make you queasy (as it did for me) if you have the field of view set on the default narrow setting. Jumping between the shadows of rotating fan blades and leaping across moving platforms gets tedious. It may have been better to finish the game on a brighter note. 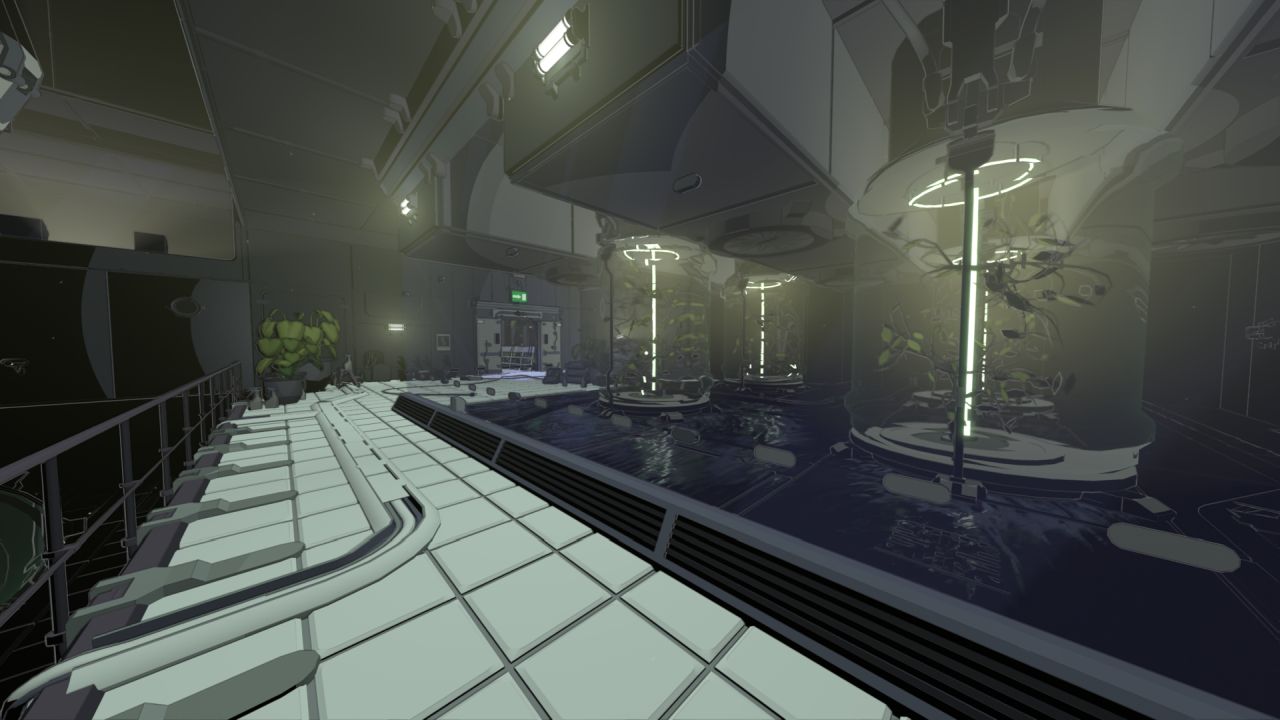 Lightmatter is a lightweight puzzler that covers the basics of the genre. It compares to Portal but lacks the same finesse, humor, and complexity. It revolves around two main devices: lamps and photon connectors. The former is simple but used well enough. And the latter is interesting although ends up being clunky. The player’s guide, Virgil, lacks much personality or humor, but he’s still better than complete silence. It may not have a lot of mechanics, but that doesn’t make it a bad game. It uses what it has well and does it all with pleasing visuals. Lightmatter may walk in the shadow of giants, but at least it brings its own light source.

Our ratings for Lightmatter on PC out of 100 (Ratings FAQ)
Presentation
75
Excellent stencilled shadow areas and good visual contrast that aids puzzle solving. Music is not well represented and David Bateson is a little bland as Virgil.
Gameplay
65
The lamps are basic but are used more extensively than expected. Photon connectors are interesting but tend to be clumsy. Jumping over shadows gets a bit excessive in places.
Single Player
55
Virgil is your guide and he provides enough information about the world and technology for it to be understood. Unfortunately he’s just not that funny or interesting across the four hour adventure.
Multiplayer
NR
N/A
Performance
(Show PC Specs)
CPU: Intel i5 3570k
GPU: XFX RX 480 GTR Black 8GB
RAM: 16GB DDR3
OS: Windows 10 Pro 64-bit

55
Stutters before entering every new area. A few crashes happened during gameplay, and a couple of the puzzles broke.
Overall
68
Lightmatter rests somewhere in the middle of the pack when it comes to first person puzzlers. It uses the basic light tools satisfactorily, and the sharp visual style and brisk pace help it succeed. Unfortunately some technical blemishes offset its better qualities.

Our Review of Lightmatter
68%
Adequate
The Verdict:
"Plain puzzling across the penumbra"
Game Ranking
Lightmatter is ranked #1150 out of 1664 total reviewed games. It is ranked #75 out of 131 games reviewed in 2020.
1149. Vampire: The Masquerade - Coteries of New York
PC
1150. Lightmatter