The things we do for our pets

Ah, yes, the beat 'em up. The old fashioned genre that continues to survive year after year. Long after the death of the arcade, developers are still churning out titles. Some approach the genre in fresh and exciting ways, while others are content with tapping into a feeling of nostalgia. The shift to the beat 'em up feels like the logical move for developer Vertex Pop. Their previous two releases, We Are Doomed and Graceful Explosion Machine, slapped fresh paint on other older genres. Their latest effort, Super Crush KO, continues that trend. 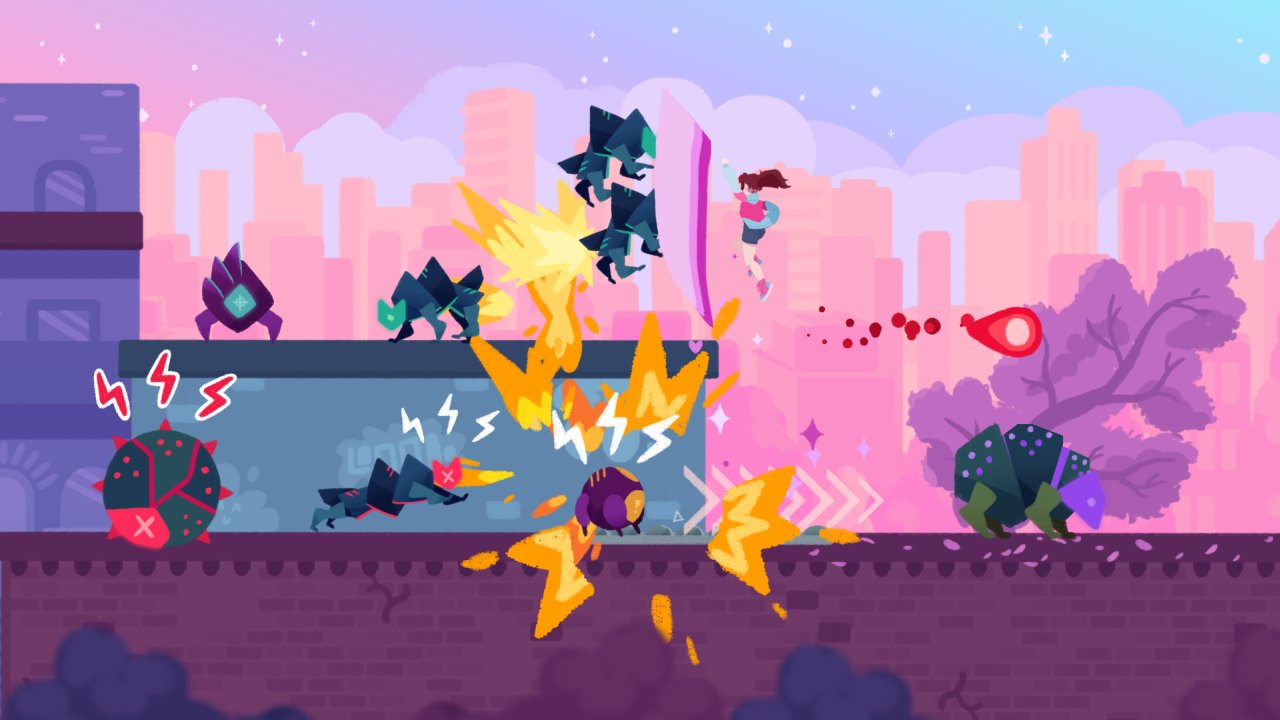 What would you do to recover a beloved pet? That's the question Super Crush KO asks of its heroine, Karen. One day she is chilling at home with her adorable cat Chubbz, the next she is fighting off an alien invasion. Of course, all this drama could have been avoided if Ann, the leader of the invading robot army, hadn't decided to kidnap Chubbz in the first place. It's not her fault she didn't know that the jacket wearing girl she cat-napped from would be such an ass-kicker.

Outside of the very rude cat burglary, there really isn't much plot to be found in the title. The genre has never been known for deep lore, probably due to its coin-op origins, so I suppose it makes sense. However, it is a little unfortunate, as Vertex Pop does know how to craft fun characters. What little we get of Karen is delightful, as she is a funny presence. It would have been nice to see even more of that personality get a chance to shine. Equally nice would have been to see any development of antagonist Ann. She's clearly a lonely being, so let's get more of that. Just a little bit of characterization would have gone a long way.

Fortunately, when it comes to appraising a brawler, gameplay is what really matters. Super Crush KO is a throwback that isn't looking to innovate. The more traditional tool in Karen's belt is her regular strike. Just a simple punch-heavy combo, it can be dragged out to a four-piece that does a good amount of damage. And on top of that, it can be used to either toss an enemy in the air or throw them to the side. While it may not be the deepest system, there are ways for you to interject some strategy into a battle.

As you progress through the campaign, you'll come across snacks that grant Karen other abilities. Slashing uppercuts, downward kicks and corkscrew dives soon become integral parts of her repertoire. These attacks are not only more powerful, but they are great for getting to enemies in a quick and concise fashion. You can use them to take out a large group at once, or for just getting to one pesky foe on the edge of the screen. These attacks are on a meter, though, which can be refilled by killing enemies. It's easy to avoid running out of charge, but it does prevent you from just spamming the same attack repeatedly. 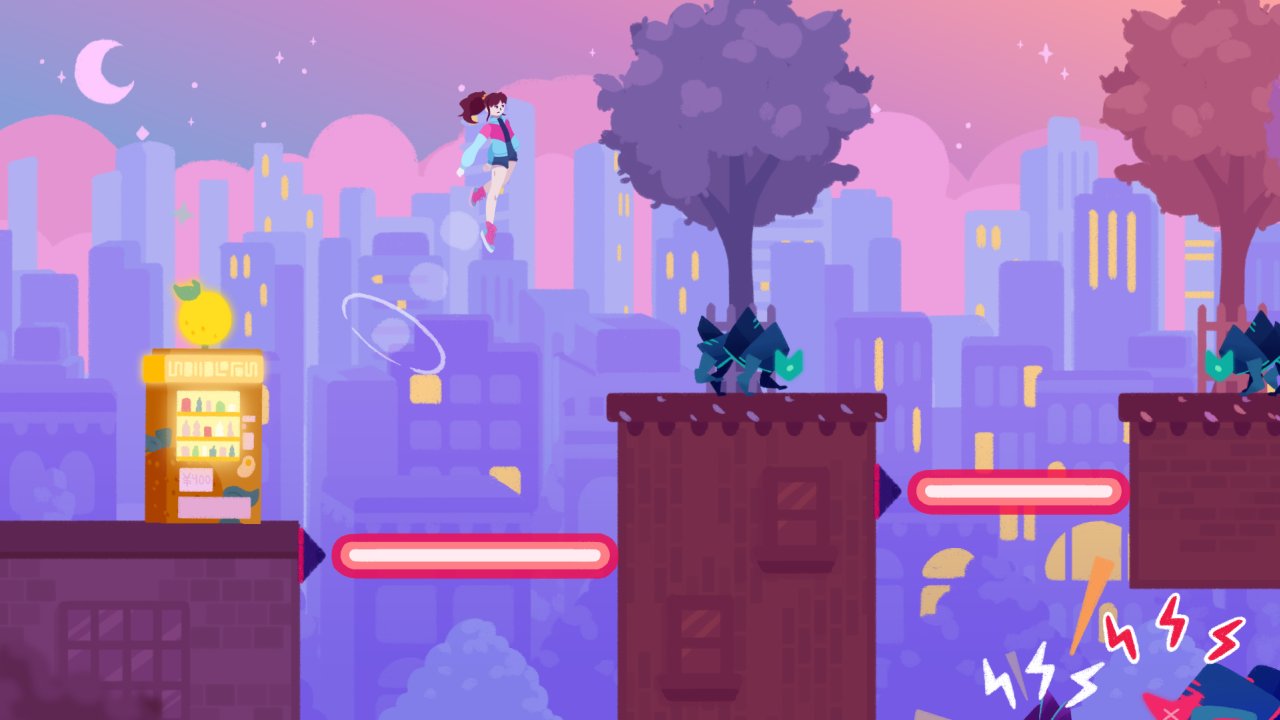 Outside of her hand to hand abilities, Karen also has two other important skills. The one you'll come to rely on most often is parrying. Doubling as a dash, the move acts as a way to bypass enemy strikes and lasers. With only a smidgen of health afforded, you'll have to constantly be using this in order to survive each wave. The other is an alien rifle she picks up after Ann scurries off with Chubbz. It's not particularly strong, but it is good for taking out smaller enemies or keeping up a combo chain. Much like the special strikes, both the rifle and parry operate on cool-down meters. So, again, you can't spam either one and need to be especially thoughtful with the best time to utilize a dodge.

While the ostensible goal of Super Crush KO is to recover Chubbz, there is a sub-game at play as well. Your performance on each level is given a letter grade, up to S+. Completion time, lives used and how many hits you take all factor into the grade. The most important aspect, though, is how well you do against designated groups of enemies. A handful of times throughout a stage, you'll reach a section where you'll have to fight off a dozen plus enemies in order to advance. Constantly moving, attacking and avoiding damage will build that letter grade up. Slowing down or taking a hit, though, will drop that grade down to zero.

Keeping this in mind is about as tough as it gets in Super Crush KO. In a genre known for being cheap and frustrating, the title is surprisingly light on difficulty. I died maybe four times across the entire campaign, and considering how generous it is with continues, the chances of ever being hit with a game over seem astronomically low. It can be difficult keeping up a high combo during the entirety of a wave, though. Between the chaos on-screen making it easy to miss attacks, and the tight window you have for keeping the hits coming, it's easy to go from an S to a D in a flash.

As enjoyable as this can be, it's hard to get around the fact that there isn't a ton of content to be found in Super Crush KO. There are only 20 levels in the title, and four of them are boss battles. It doesn't take long to run through the entire campaign, and there's almost no reason to go back for seconds. You could do it to improve your grade, but there doesn't appear to be any kind of reward for doing so. In fact, I wish the title offered up more reasons as for why you should want to get a high score. Maybe some kind of stat boost or aesthetic reward. It doesn't have to be big, but something would have been appreciated. 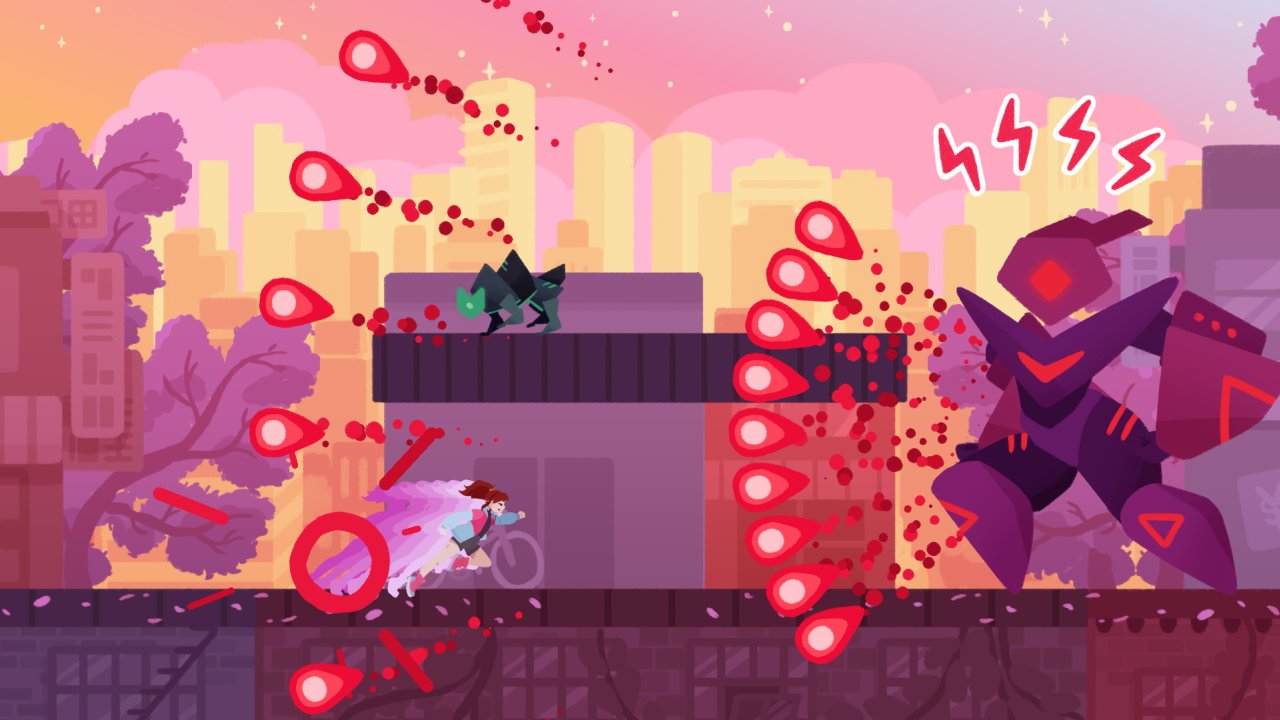 While Vertex Pop's previous efforts have featured some crazy visual effects, Super Crush KO is much less hectic. That doesn't mean it doesn't look good, though, as the title's pastel palette pops on screen. The visuals are incredibly easy on the eyes. The colors won't strain your eyes, and the sprites are big and bright. It's a very polished and pleasant style that may not feel fresh but is still welcome. My only complaint is that robot design used for boss battles is only slightly changed from one to another. The battles themselves are nothing to write home about, and there's a real lack of effort in making them stand out from one another.

Super Crush KO is the type of game that you have fun with, but it doesn't leave much of a lasting impression. The gameplay is fun, the plot is light fluff and the visuals are pleasant. It's a perfectly enjoyable experience that is a more than acceptable use of a few hours. However, once that time is up, there's nothing really drawing you back to it. No multiplayer options, no side content to unlock and no skill set to develop. That's very much the MO of the beat 'em up genre, but that only really works when you're dealing with an arcade release. When it comes to home consoles, it just feels lacking. There's little wrong with the title, but it's almost as hard to find something it does extraordinarily well.

Our ratings for Super Crush KO on Switch out of 100 (Ratings FAQ)
Presentation
75
The low-key, pastel palette makes you feel calm in a sea of chaos. The character designs for Karen and Anna are wonderful, but the robotic enemies could have used more variety.
Gameplay
78
Super Crush KO doesn't do much to advance the genre, but it plays remarkably well either way. Smooth combo crushing action that will satisfy any fan of the beat 'em up.
Single Player
58
Disappointingly short, and lacking in any real replay value. Super Crush KO would have benefitted from either additional levels, some kind of bonus mode or just any reason to want to replay levels besides score chasing.
Multiplayer
NR
None
Performance
85
No noticeable issues between docked and portable mode.
Overall
70
Super Crush KO is a pleasant throwback to the glory days of the beat 'em up. The action is fast and fluid, and the visuals are charming and endearing. It's also a throwback in a bad way, though, as the lack of replay value and barebones story would feel right at home at an arcade.