A thrilling action-brawler that continues to elevate in enjoyment

Who would have thought a game that takes place in purgatory could be so fun? It doesn't take long to find out we're in for a wild ride after being tossed into this bizarre hack 'n' slash. All you have to do is look at some of the wacky foes, like a squad of monkeys heaving toxic bowling balls from a banana boat, to realize this is no ordinary action game. Yes, Draw Chilly clearly doesn't take itself too seriously despite its Halloween themes. This zaniness is reinforced by cartoonish pixel art, a cheesy rock soundtrack, and crazy features like the ability to ride a large chicken over enemies, turning them to chicklets. As a wacky action-survival game with a tinge of "tower defense," the experience can ring a bit shallow and repetitive at first. Yet, despite its goofy traits and mindless button-mashing, Draw Chilly is a delightful, deceptively nuanced romp, whose fun and excitement only elevates as it progresses - like the industrial-themed setting of this game. 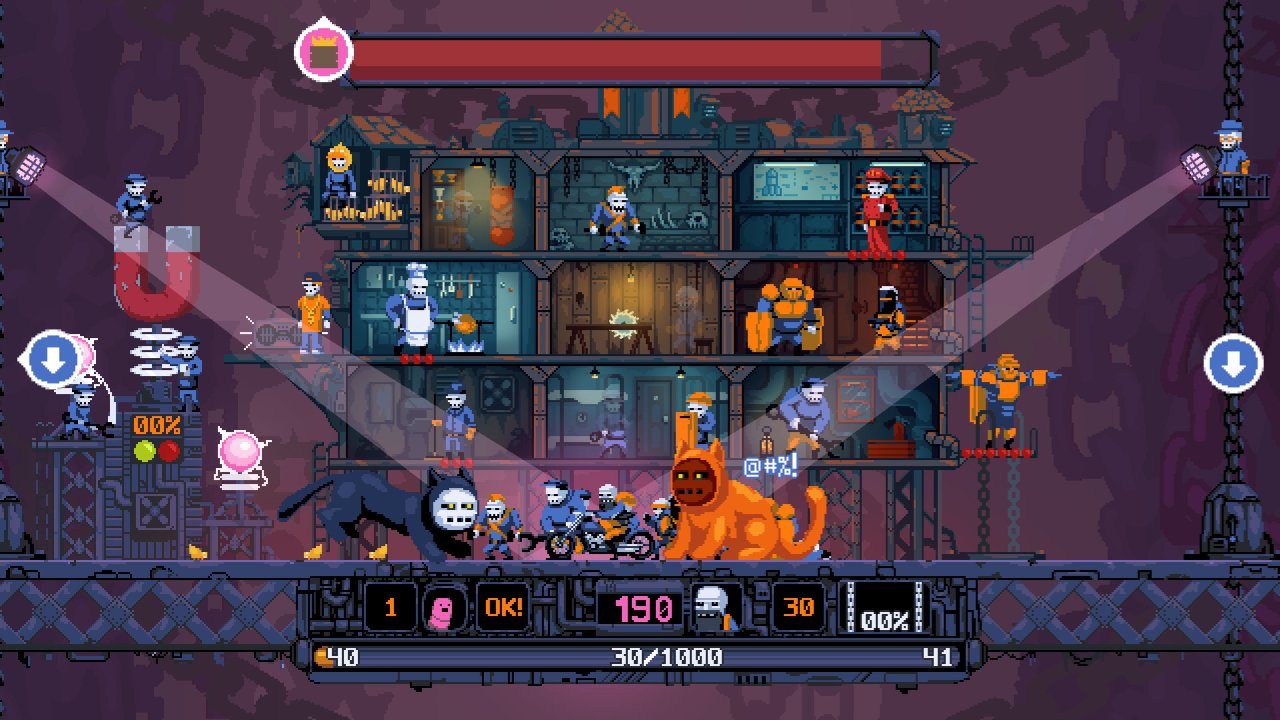 If you happen to be aware of developer AZAMATIKA's other title which resides in the same trippy universe, "Peace, Death," you may recognize the similar hellish themes and pixel art. Though the differences basically end there. Rather than repeating the unique sim/management concept of decision making and information gathering, Draw Chilly essentially takes the opposite approach with its constant bombardment of brawling action. Still, the premise is just about as bonkers as the studio's prior project. You take the role as Vladimir, a mechanic of the fiery underworld, who's been tasked by the Grim Reaper to cart a city and its inhabitants from purgatory. This is achieved by your band of mechanical minions, who constantly crank your industrial town skyward by way of a big mechanized platform. And things only get nuttier from there.

As you quickly find, the entirety of this slaughter-fest resides on this platform, with any and all progress coming from enemy spawns as you and your crew pull your constantly-evolving town upwards. It's essentially one big fight for your survival, and despite the occasional monotony of the settings and mobs, there's enough going on to keep things exciting. Your mission - should you choose to accept it - is to climb your way through this game's 100 stages, which are basically just waves of enemy spawns that get increasingly insane the higher you go.

If you somehow manage to survive this bombardment of hostile monkey foes and wacky bosses - which include an old dude flying around on a goat - you'll also unlock two other modes. These include an Adventure Mode, which further dials up the randomness and lasts indefinitely, in true purgatory fashion. You can also really test your acquired skills and sharpness by playing Survival, where you can hack and slash your way to a spot on the online leaderboard. The campaign is pretty robust and enjoyable as it is, but it's certainly nice to have a bit of a diversion to mix up the gameplay. 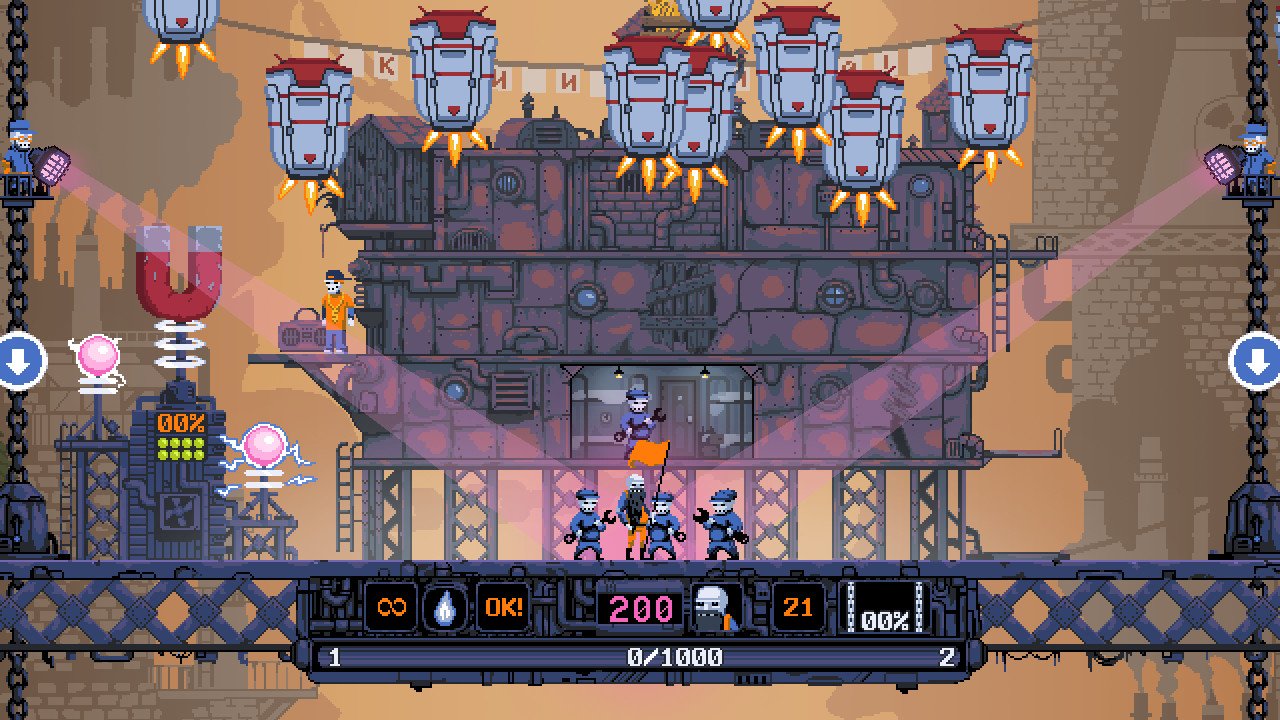 The gameplay of Draw Chilly is at once basic in its execution and dynamic in its features. As Vlad, you get a single attack move, which you'll be spamming "to hell and back" along with an amusing dash move where Vlad can speed around on a motorcycle for a bit. Beyond this, all you really get is an ability-triggering key, which you can assign/shuffle through by prompting a menu screen. With the array of different powers you can accumulate in any given game, it can be easy to mistakenly bust out an ability you didn't intend. Accidentally using your less impactful slime item which slows mobs when you intended to use a ghost that grants invincibility, for instance, can be a tad frustrating. It could have been beneficial to have multiple hotkeys assigned to different items to alleviate some of this. Still, overall the system is solid and intuitive, and much of Draw Chilly's fun stems from playing around with these collectible limited-use powers - earned by gaining XP. It can be quite satisfying calling in a flying taxi to plow through a horde of hostile monkeys, or walloping a row of them with a massive wrench strike.

While the slaughter-fest of wiping out these foes in various ways proves enjoyable and funny, there are some light strategic and "tower-defense" elements which inject some depth. You're given a clearly-displayed HP counter, which can be slowly replenished by nabbing pink orbs from defeated foes. It's useful in high quantities, though they could have done with a tad more than a measly 1 health restoration for each orb initially. Mind you, this is the same game in which a single hit from a boss can wipe out half your HP. Thankfully, your health can be expanded by purchasing enhancements with collectible "VladCoins." While the aforementioned XP is gained by way of gathering chicklets, these coins are ultimately more crucial. You can beef up Vlad directly through stat increases (speed, power, etc.) or indirectly by increasing the potency of items you use. Items will be carted in by way of floating chickens dropping crates onto your mobile city platform - why not, right?

This process - and the game's pacing in general - can be sped up by leading your gaggle of mechanics to the edges of the platform, as a couple of them can crank the platform more quickly. These henchmen are also basically your pawns in battle, giving you a bit extra firepower and acting as your human shield at times. As you progress, stronger, and alternate varieties will be unlocked and begin to spawn from your town, such as shield-holding Defenders. While you should look out for "numero uno" first and foremost, you'll certainly want to try and protect these guys when possible, despite Draw Chilly giving you a constant, trickling supply of them. They can (and will) be swiftly killed. You are also granted a handful of resurrections to pick you up where you left off, and can save/restore your game with most of your progress intact. Resurrections are thankfully infinite during bosses - as you'll typically need several during these tough showdowns. 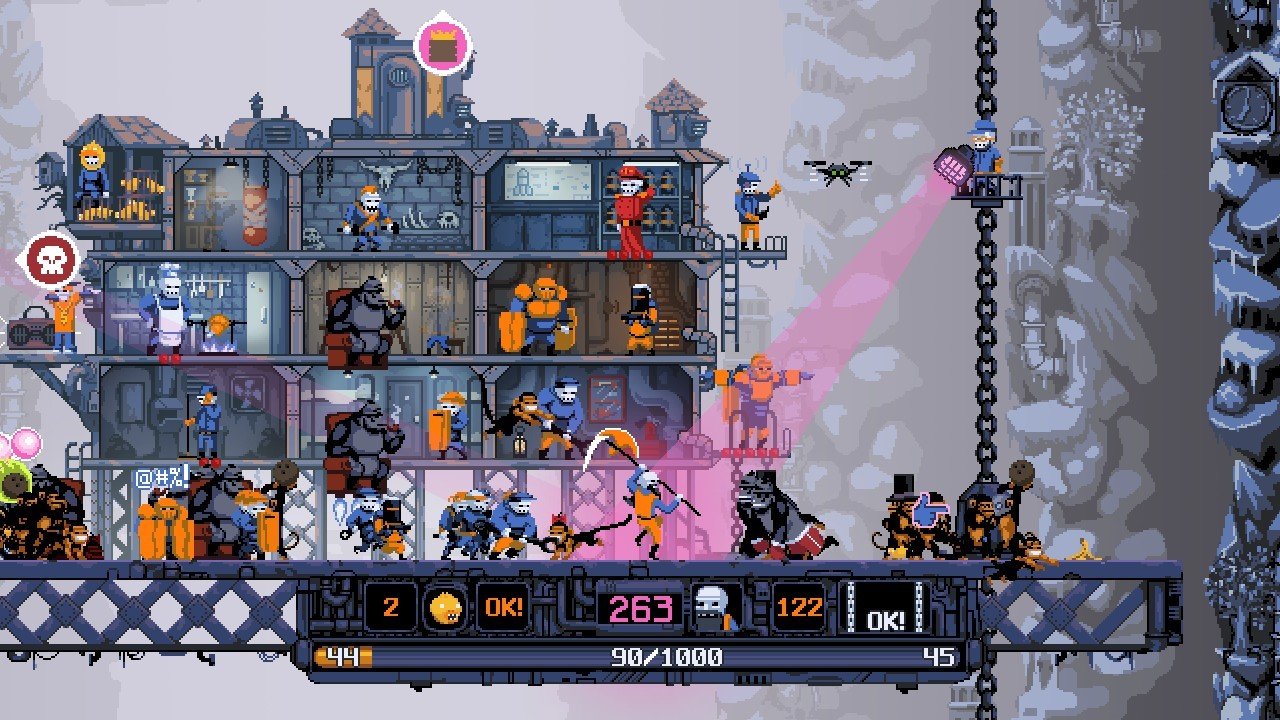 One of the coolest aspects of this purgatory skirmish of insanity is the ability to summon a "Four Horsemen" once in awhile, which you can choose from later in the game. These take the form of a number of random cartoony manifestations, and can aid you when things get particularly "hairy," as it were. I rolled with Pestilence first, who was able to call forth a small army of rats to help me thin out the huge number of apes overwhelming me. You can look at these as essentially your ace-in-the-hole special move which can wipe out a slew of primate baddies. It's a satisfying feat, even when compared to the enjoyable combat and colorful abilities you'll constantly be busting out.

Draw Chilly manages to be both basic and elaborate; both goofy and clever. It pummels you with tons of monkey-slaying chaos, and I managed to have a great time with it overall, even though it can drift into simplistic, repetitive territory at times. If you're cool with the basic hack 'n' slash cheese, there's little the game gets wrong. Some form of online co-op could have gone a long way, though it may have been tough to manage during those particularly anarchic moments with dozens of foes packed onto one fairly small, single-platform scene.

The steady acceleration of action, Vlad's numerous upgrades, increasingly deadlier mobs, and cool ability unlocks kept the experience entertaining. Aside from a few ridiculous boss showdowns, much of the game's difficulty stays at a sturdy sweet spot; being intense while also manageable. The charming retro style, fantastical setting, and cheeky humor also helped keep me engaged throughout. The controls are palatable and the mechanics are solid (especially with a gamepad), allowing you to tackle a number of tasks swiftly, which Draw Chilly often demands, especially in the later stages. This is a fun, ape-tastic ride across purgatory that will keep coming back for more.

Our ratings for Draw Chilly on PC out of 100 (Ratings FAQ)
Presentation
78
A melodic rock-meets-orchestral soundtrack and colorful pixel art enhance the already neat hellish motif and loony qualities of Draw Chilly's presentation.
Gameplay
80
AZAMATIKA does about as good a job as they can in keeping this button-mashing marathon feeling fresh and exciting, constantly cranking out upgrades, enhancements, and fun abilities, along with new, stronger mobs. Lack of hotkeys notwithstanding, mostly intuitive, simple controls and interface.
Single Player
75
Campaign is pretty lengthy, spanning 100 chaotic stages - mostly amounting to enemy waves with can typically be tackled in several seconds. Occasional monotony is broken up with thrilling boss fights and some humorous cutscenes, adding depth to the already amusing premise. The even more chaotic extra modes add some longevity.
Multiplayer
NR
None
Performance
70
A touch of slowdown when the screen was essentially overflowing with baddies, but mostly a smooth performance.
Overall
78
Don't expect a masterpiece, but those who enjoy pure, undiluted action-survival gameplay - and are fine with a bit of repetition - should get a kick out of Draw Chilly. 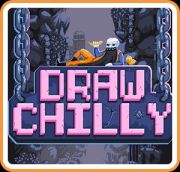 Our Review of Draw Chilly
78%
Good
The Verdict:
"A thrilling action-brawler that continues to elevate in enjoyment"
Game Ranking
Draw Chilly is ranked #574 out of 1646 total reviewed games. It is ranked #31 out of 144 games reviewed in 2019.
573. Traffix
PC
574. Draw Chilly