WHERE THE WATER TASTES LIKE WINE
Platform: Switch
63
SummaryNewsArticlesVideoScreens

More like an interactive book than a video game

Where the Water Tastes Like Wine is experimental and ambitious, at times feeling more like an interactive book than a video game. It’s a story about travellers sharing tales and spins many a fine yarn through its compelling and eloquent writing. Almost two years after its PC release, WTWTLW is now available on the Switch. The portable nature of Nintendo’s console lends itself to an indie title with a run time of up to 20 hours - and perhaps a new platform can breathe new life into the game. 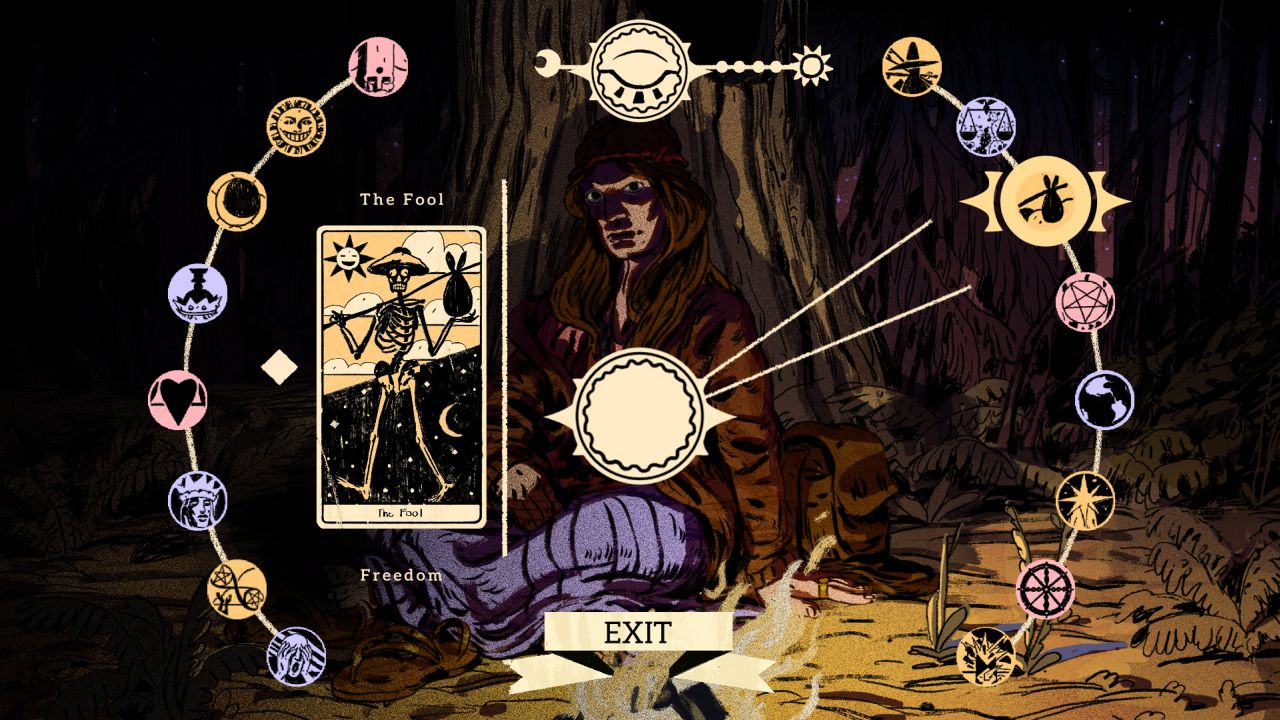 The game opens in the corner of a dimly-lit saloon. You enter a poker game and make quick work of everyone at the table, all except the Dire Wolf. Unable to match his wager in the final hand, you instead wage your word. You lose, owing the debt of your life and labor to him. The Dire Wolf instructs you to find stories across the United States and share them with travellers, allowing them to grow into great myths and legends.

Every traveller you meet will ask you for a certain kind of story: tragic, hopeful, scary, thrilling, or funny. It’s up to you to determine the meaning behind each story you find and, if you can match it to what the traveller wants, they’ll tell you something about their life.

Each character has a rich backstory that affects what kind of tales resonate with them. Cassady is a bitter poet who will often ask for sombre stories that indulge his melancholy. Rose, a hippie traumatised by her drug addict parents, prefers ghost stories and funny anecdotes to lighten the mood. Each character’s arc is split across three to four chapters, which you uncover as you meet them in different parts of the country.

There are 237 unique stories in Where the Water Tastes Like Wine, each one self-contained and no more than five to ten lines. They are intimately and expertly written but you’ll only hear them once - only identifiable thereafter by their title. Some will stick with you, others will escape your memory, but any story you share with travellers has the potential to evolve over time. When a story evolves it replaces the original, changing its name and increasing its effect.

You meet a farmer begging you to help him look for his lost son, who you find dead in a barn, accidentally crushed under a grain mill. Share this story and over time, it will evolve into one of a boy who committed suicide, unable to stand another minute working for his tyrannical father. You witness two men embrace in the streets - convinced they’ve found their long-lost twin - only to realise that the other isn’t who they thought. This will change into a joke about four (and eventually, eight) identical men born to eight different mothers, who each mistook the other for his brother. 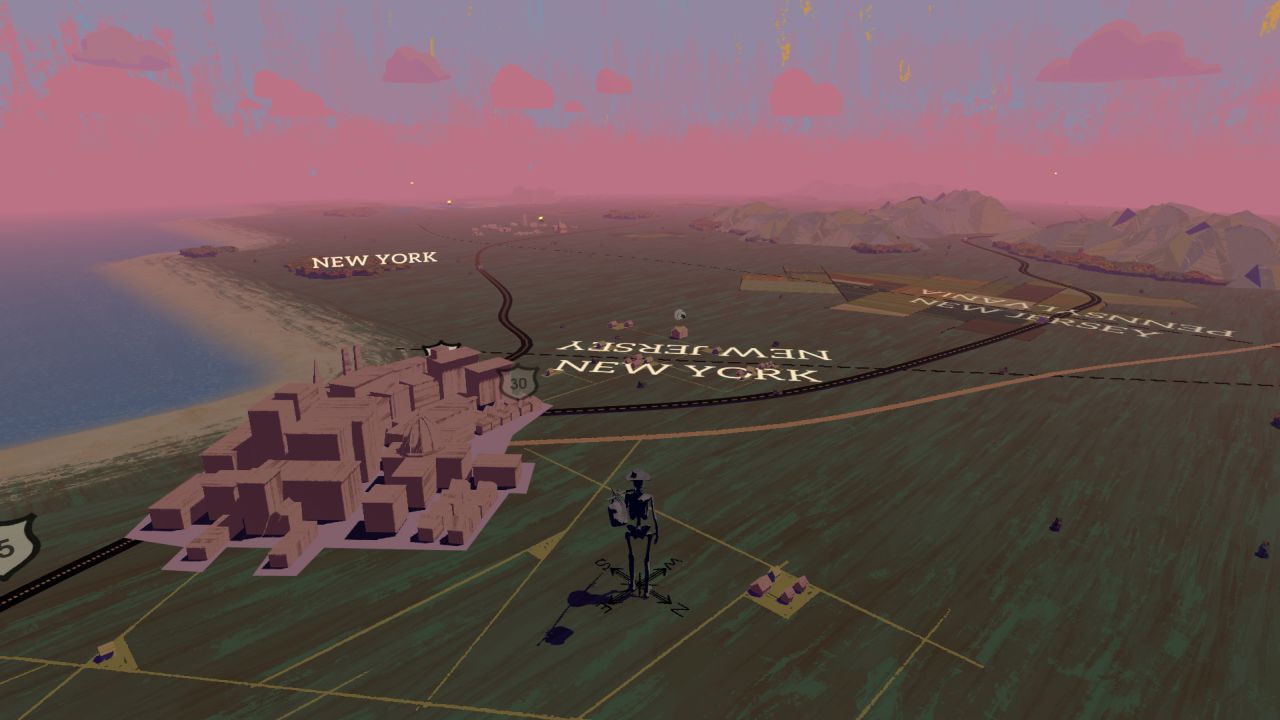 This is where WTWTLW treads new ground in terms of its gameplay - a forever-shifting memory game contained in a visual novel, where you must remember the moral of a story even when it bears no resemblance to the one you first heard.

It’s the accompanying parts to Where the Water Tastes Like Wine that feel tacked on. The art design is intentionally abstract, but the overworld feels uninspired compared to the character illustrations. The areas surrounding major US cities usually have some life but beyond that, the map is barren and walking through it is cumbersome.

There are ways to speed up traversal, from hitchhiking rides to travelling by train. The latter is by far your quickest option, but it’s expensive. You can earn money from finding work in the cities, but you only get one chance and sometimes come up empty. So, most of your time is spent walking. You don’t walk that slowly but, in a game that can take up to 20 hours to complete, things inevitably starts to drag. An original folk and country score helps pass the time but, with only a handful of tracks, they eventually grow tiresome as well. And the melodies become more irritating given that you’ll hear them twice as often. You can whistle to speed up your walking pace (which, given the above, you’ll certainly want to do) but they’re high-pitched, tinny renditions of the same tunes.

Other cracks show through Where the Water Tastes Like Wine’s exterior that break the immersion. Character stories are deeper and more complex than those you’ll find out in the US, but they’re prone to repetition. Most characters will have one or two lines of dialogue for requesting a story. Every time Cassady requests a sad story, for example, he’ll say “Sometimes I want to hear a story of a sadness that resonates with my own”. I can’t imagine how many lines of dialogue are in WTWTLW - most of which are excellent - but it’s the lines you hear twenty times that you remember the most. Repetition also creeps into the illustrations - two racist twins who don’t want you staying the night in their town are the same two brothers that help you find work in the city. 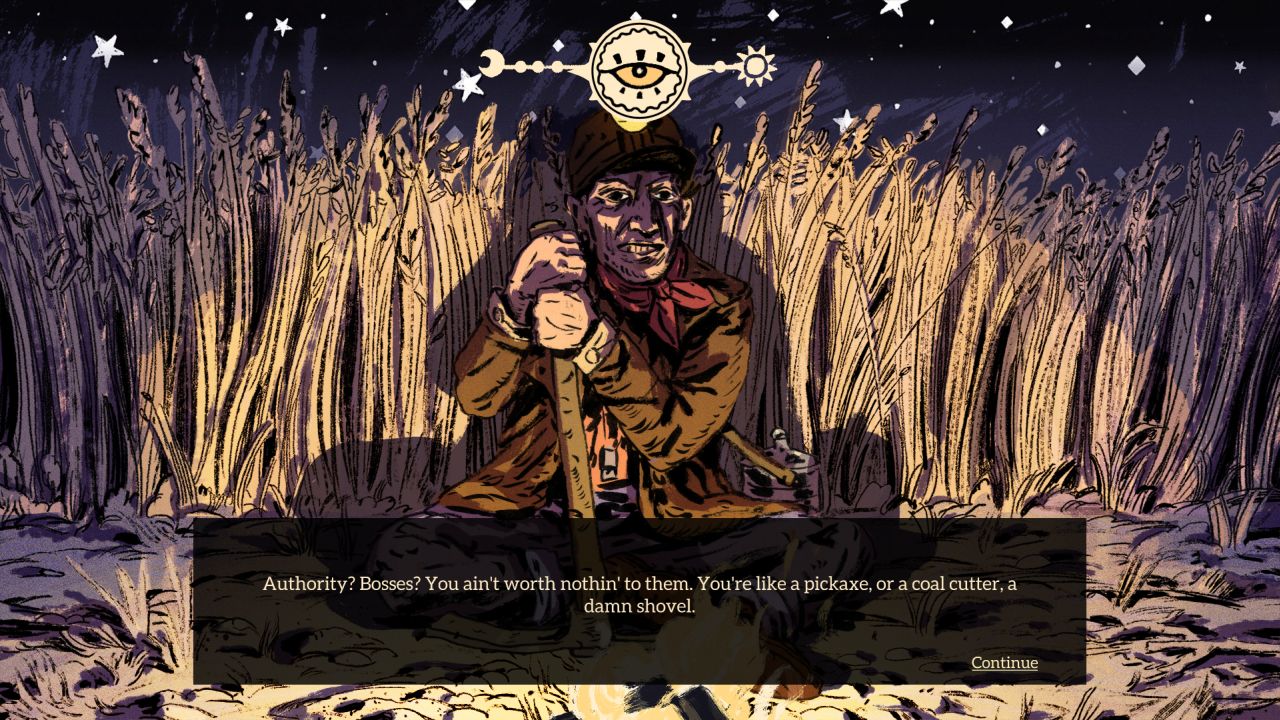 Once you complete a character arc, you can fast-travel to the location you first met. This is very useful for speeding up traversal but it also allows you to exploit a big part of the game. Every time you reach a major city you’ll be able to ‘hear a story’ - the action for increasing its power. Once you complete two character arcs, fast-travelling between them will reset the ‘hear a story’ icon, letting you max out your stories’ effectiveness. This significantly decreased how long it took to beat the game but it felt like an oversight of the developer rather than a helpful addition.

Where the Water Tastes Like Wine’s narrative is unique and fascinating. But it’s a video game first, a story second. The core gameplay elements are so underdeveloped and repetitive that most people will burn out before seeing it through to the end. At times, the game feels woefully passive, only able to recount tales from the past. I longed for real-time interaction with the characters, not least because they usually pose a question at the end of every conversation. But the real-time elements feel like dragging your feet through the mud, the gameplay acting as nothing more than padding between the interesting parts of the story.

A drawn-out experience forces you to speed things up. I started skipping spoken dialogue - despite the quality of the voice acting - because it was simply quicker to read. I started paying less attention to new stories, treating them as mere tools to unlock a character’s next chapter. After collecting 130 stories, I stopped searching for new ones altogether as the fully-exaggerated versions work better.

Perhaps the underlying message of Where the Water Taste Like Wine is that we can’t remember stories word for word. Over time, they become nothing more than a title, their worth determined by the reaction they cause. Unfortunately there’s nothing in the game to confirm or reject this. While each story you uncover in WTWTLW evolves, the overarching plot does not. There is no grand finale (there’s barely a finale at all), no change to the story set out in the game’s opening minutes. Characters share their feelings, then they leave; you repay your debt to the Wolf, and you leave. 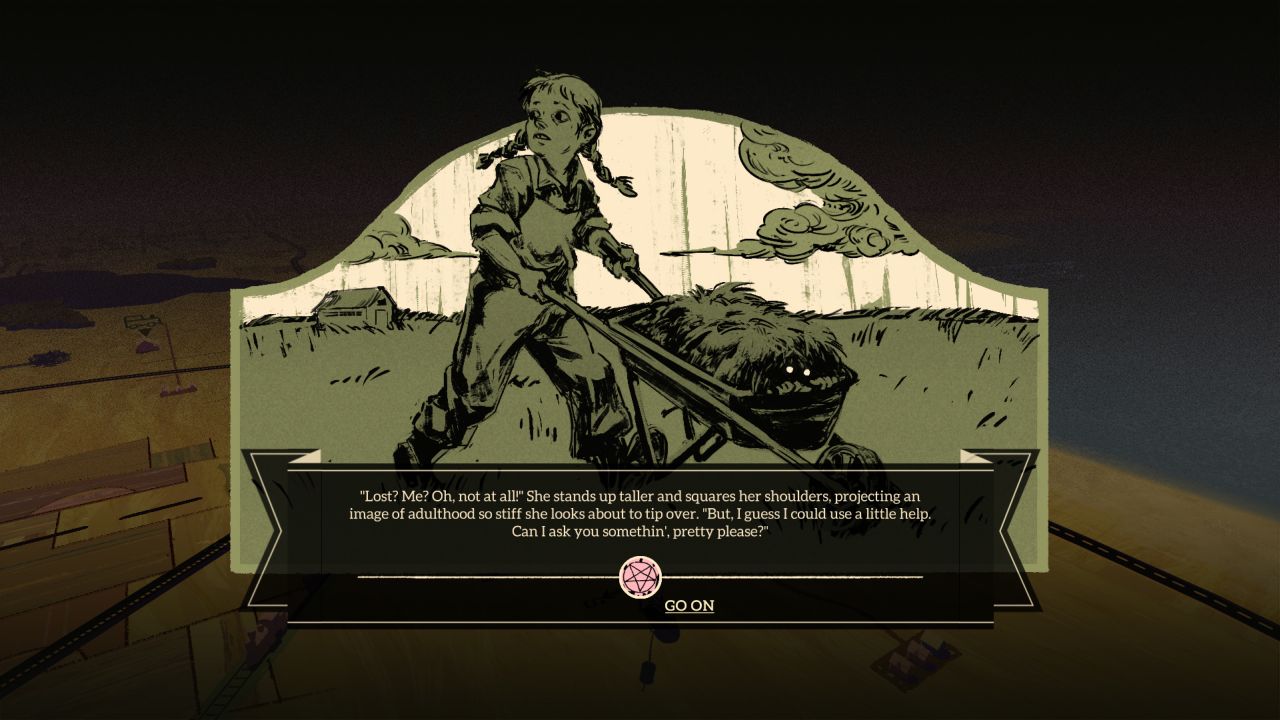 So, if the story of Where the Water Tastes Like Wine is to be boiled down into one sentence, it’s this: an experiment in interactive storytelling that tells an excellent tale but ultimately fails as a videogame.

Our ratings for Where the Water Tastes Like Wine on Switch out of 100 (Ratings FAQ)
Presentation
63
Hand-drawn illustrations are beautiful but sparse while the US overworld feels largely empty.
Gameplay
40
Choosing dialogue options is much easier on the Switch than PC. However, there is very little gameplay to speak of - only ever amounting to walking somewhere and pressing ‘A’. However, what is there controls fine.
Single Player
74
An unprecedented premise and exciting story. While there is next to no overarching narrative and little payoff at the end, each character you meet feels like an individual with a rich backstory.
Multiplayer
NR
None
Performance
80
Some minor framerate drops when returning from cities and character interactions to the overworld.
Overall
63
If you treat Where the Water Tastes Like Wine as a visual novel with added interaction, you’ll find a unique premise surrounded with a host of interesting characters and stories. As a video game, however, it is too stripped back to feel substantial and remain engaging through its lengthy run time. 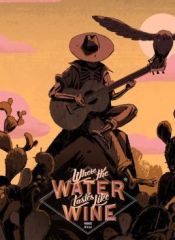