The narrative adventure loses its footing

At first, Arise: A Simple Story isn’t so bad. It’s not until you’re about an hour in that you start to see the holes in the design and how this is not just another narrative adventure. Art house video games, specifically these seemingly simple platformers, often rely on fairly abstract narratives to avoid getting into the nuances of personal circumstances that can’t be covered in the kind of game they’re making. Something like Inside, Gris, or Journey, use tone and theme to try and communicate an emotion, rather than bog themselves down with traditional plot. These games work on simple concepts like discovery, dread, and bravery. This is where Arise gets into the weeds. Arise is a constant car crash of mechanics, mood, and story-telling that all seem at war with each other instead of coming together. It’s the kind of game that proves how necessary direction in games is because every element seems to be operating on a different page. The game wants to evoke emotion through its presentation, but a forced perspective and challenging controls get in the way of that. It wants you to connect to characters but spreads limited interactions out through gameplay-heavy sections with ever-changing mechanics. In the end, there’s nothing simple about Arise - it’s a complex web of differing ideas that amount to a painfully misguided experience. 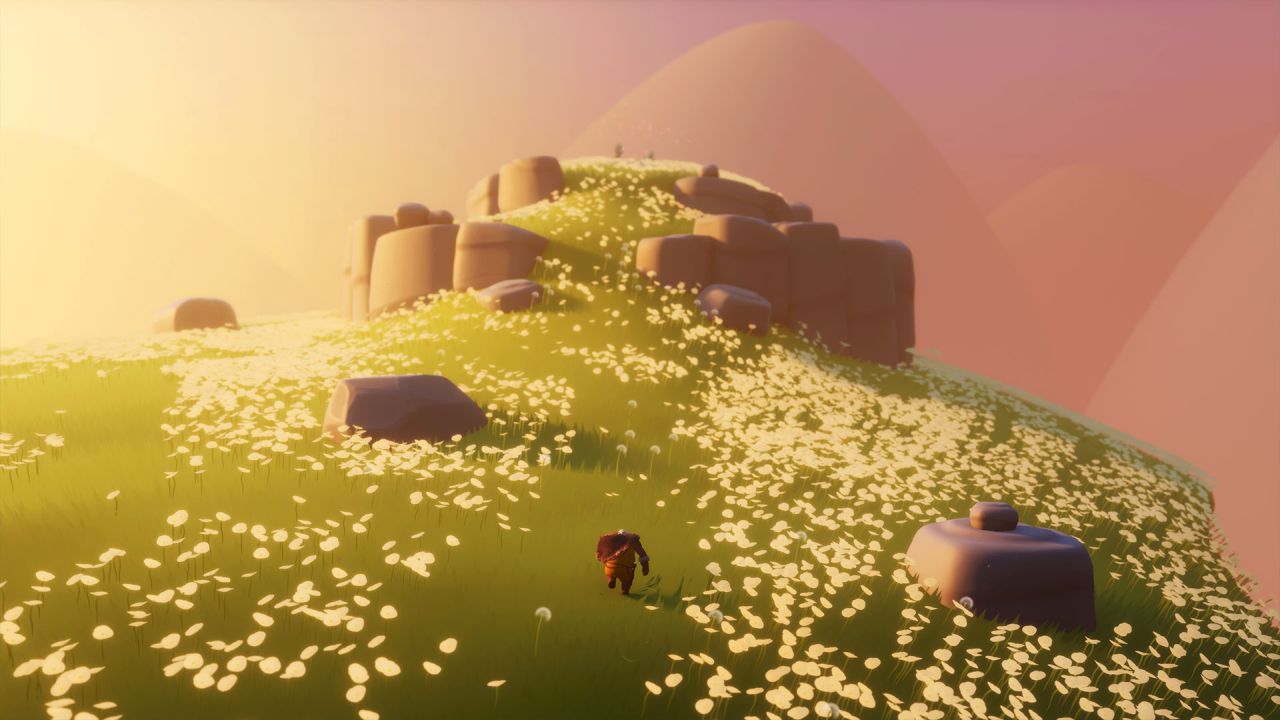 Players control a recently deceased elder of a snowy Viking-like clan. Right off the bat there’s a conflicting ideology as a group of people have gathered together to send off our hero, but going forward the game only explores the relationship between the protagonist and his wife. It never addresses why so many people were affected by his death and why they’d turn out for his cremation. In fact, later in the game, our hero shuns his village. The same careless through line is applied to the relationship between the hero and his true love. They begin life as childhood friends and are later torn apart by a natural disaster, then journey to find each other to marry and have children. But the reasons for this, why they are so madly in love, is upsettingly vague. The game is so specific about the relationship - this particular man falling deeply in love with this particular woman - but it’s difficult to understand why. As you explore the world, there are memories you can find that are conveyed through sketches on a page - almost like photographs - but they’re difficult to find and, based on what I found, they still don’t explain the relationship.

Arise wants to have its cake and eat it too. It wants to tell the story of a specific relationship but do so in vague terms that don’t define what the developer Piccolo Studios thinks love actually is, just that it exists. Love is definitely beautiful, but why I should care about these two characters being in love is something the game is thoroughly unequipped to answer. A big chunk of the problem comes from a complete lack of perspective from the wife. Maybe with more insight into her journey, we might better understand what drives both of these characters together, but as it is - we’re left with a story that isn’t simple, it’s just incomplete. 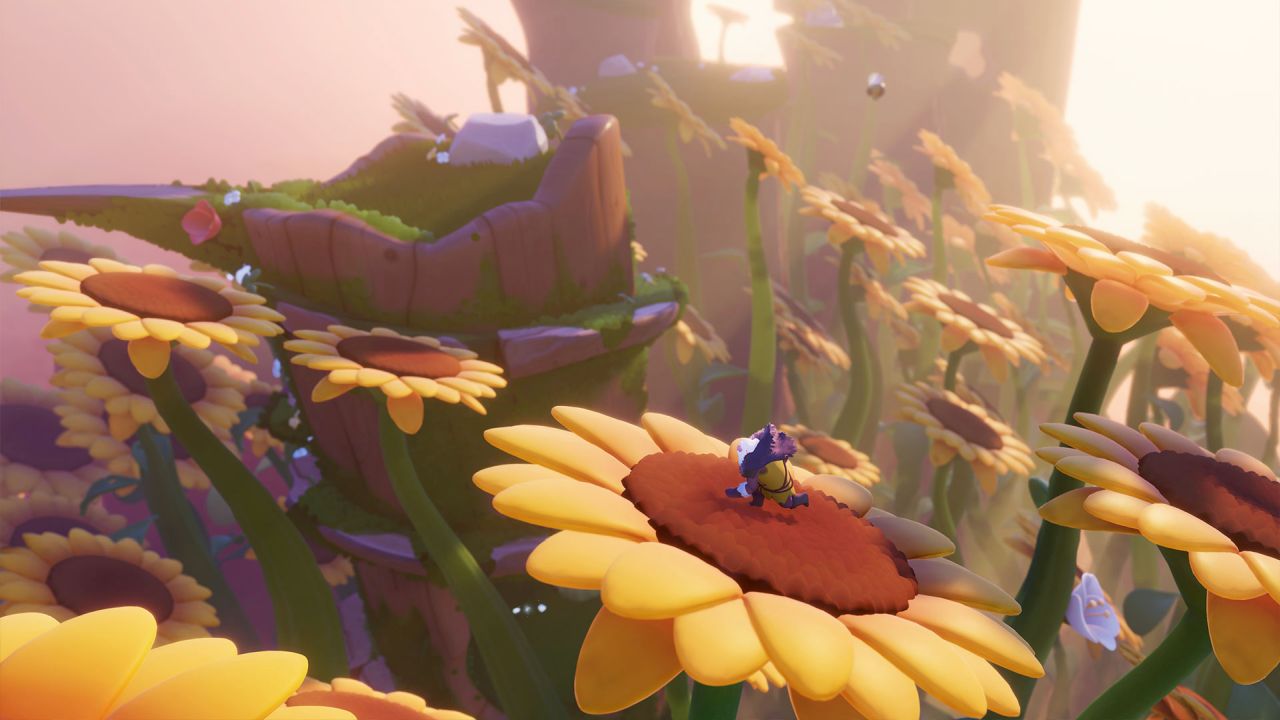 This might be more forgivable if the game played better. The central mechanic is the ability to control time, as players can fast-forward and rewind to make their way through the world. So if you need to cross a ledge, but the bridge is gone, you can rewind time and maybe the bridge will reappear before you. The game then grows more complex as you may have to rewind time to create a tree to tether your climbing hook to and fast-forward time to drop you closer to another ledge to jump to. It’s a rather smart idea in its basic form. The trouble is that the platforming is terrible. The issue starts with the forced perspective, preventing you from moving the camera and making jumps difficult to gauge. It also means that you’ll often have to sit in one spot, scrolling the game backward and forwards to find the thing you’re looking for. The correct path is never difficult to figure out, you just need to meddle with the controls long enough to actually get the character to do what you want at the right time - and that’s pretty frustrating.

It doesn’t help that each level has a different gameplay mechanic for players to fight with. Sometimes weird dark ghosts are converging on you, forcing you to hurry toward pyres that keep them at bay. Sometimes you have limited time on a giant lily pad before it sinks underwater, drowning you. The variation in mechanics means that you’re constantly having to re-learn the rules of the world as they’re only introduced through trial and error. The actual platforms are painfully finicky and I was constantly sliding off or failing to time my jump. Pivoting from mechanic to mechanic never gives you a chance to get comfortable with how the game plays and forces Piccolo to pad out the levels to justify having these new challenges - making the game rely heavily on its imperfect gameplay. 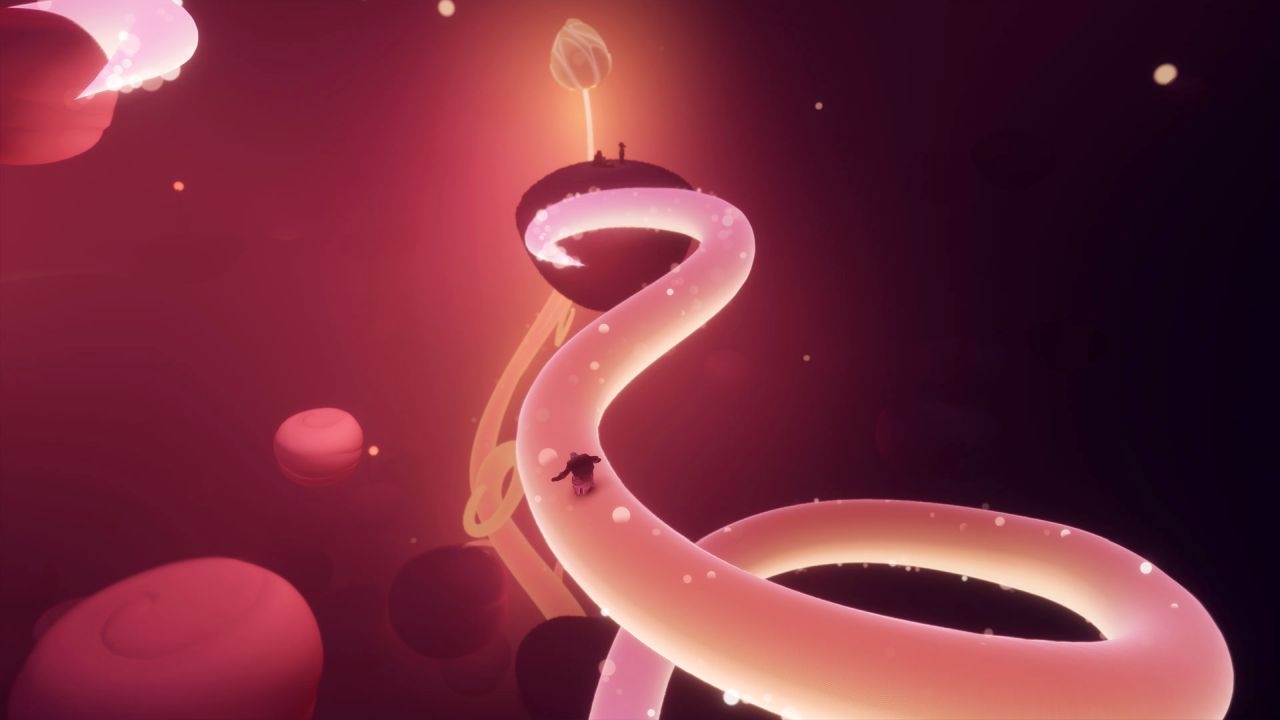 The challenge stands out because the game’s presentation is so meditative and saccharin. The colors are saturated with vivid greens, yellows, and pinks - often an overwhelmingly cheery atmosphere with themes revolving around nature. You’ll be in a whimsical forest, a sea of enormous sunflowers, or an enchanting lagoon with lovely piano playing over swelling strings. The game looks and sounds like a fairytale romance, which leads to unintentional hilarity as action happening on screen is an old man falling to his death over and over in mounting frustration. By the time the cutscene hits to reveal the end of the level, you’re sighing in relief, not letting the syrupy sweetness wash over you. Even when the game gets dark and menacing, the low thrum of tension is accented by huffs and puffs of an old man dying repeatedly. It just sounds bizarre.

You can play the game cooperatively with one friend controlling the flow of time while the other does the jumping and action of the main protagonist. Again, this is another weird choice. With the option to have two players, why not introduce the wife as a playable character? Why split control between time and actions? It only serves to make the game more frustrating and you’re constantly talking to each other about when to jump or when to fast-forward, meaning you’re hardly paying attention to the world itself - which makes one wonder why so much effort was put into the art. 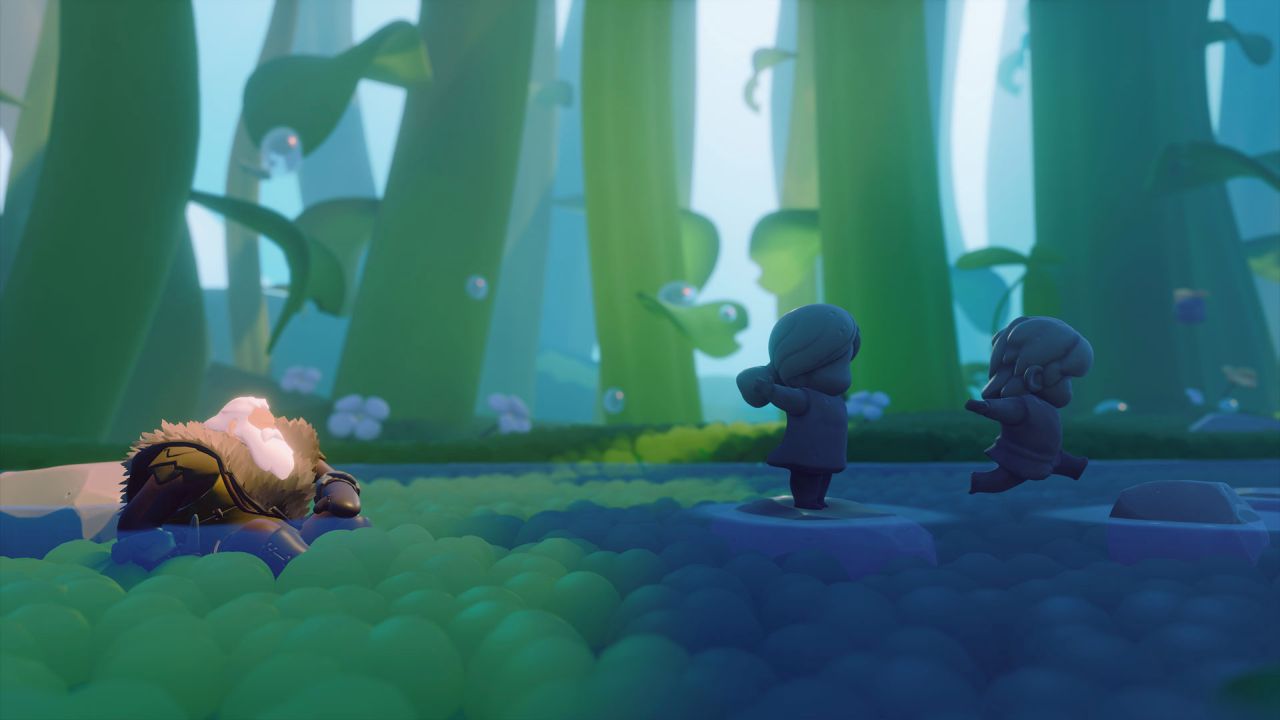 There are about eight levels over the six-hour play-time leading to you spending far too much time in the heightened settings of each level, making you immune to any charm it had. The story awkwardly spends too long focusing on the main character as a child, which is perplexing when this is supposed to be a story about an old man reflecting on love. It’s emblematic of how Arise is just filled with head-scratching decisions. Why are there evil ghosts attacking the protagonist as he tries to find his love? Why is fire being used to symbolize his grief later in the game? Why is he jumping on red-colored clouds as he awaits the birth of his child? There is so much symbolism in the game that it’s impossible to ignore (don’t get me started on the vines that he climbs before they dry out and get spikes) and while some of it works, it gets convoluted and too in love with itself, which is a summation of the game as a whole. These symbols, mechanics, messy controls and romantic imagery all stand so far apart from each other it’s baffling. There’s nothing to connect with in Arise, no opportunity to try to get on board with the cheesy romance or focus in on the tricky controls. The game can’t find a way to pull any of its elements together, which leaves you feeling cold about the whole thing.

Our ratings for Arise: A Simple Story on PlayStation 4 out of 100 (Ratings FAQ)
Presentation
60
The meditative and cheese-y romance of the game doesn’t match with the action on the screen. It’s like watching an old romance film, but the main character keeps stepping on rakes and smacking themselves in the face.
Gameplay
50
The controls are finicky and done no favors by the fixed perspective. I’d be forced to do the same jumps over and over, failing in different ways every time.
Single Player
45
The game posits that true love exists, but doesn’t have much else to say, which makes the six hours feel long and bloated.
Multiplayer
45
Having one player control the main character and the other control time means you’ll have to spend a lot of time communicating, which fundamentally changes the game but not for the better.
Performance
85
The game runs fine. No frame rate issues or crashes.
Overall
55
Arise: A Simple Story is pretty to look at, but the moment you have to start playing, it falls apart. A mish-mash of imagery, tone, gameplay, and narrative that seem okay on their own, but fail to come together. 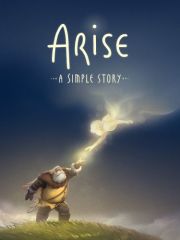 All videos for Arise: A Simple Story (1)
Advertisement ▼