DRIVEN OUT
Platform: Xbox One
67
SummaryNewsArticlesVideoScreens

A neat, colorful homage to classic sidescrollers that's both fun and frustrating

There’s been quite the love fest for retro-style gaming as of late, particularly with the rise of the indie scene. Yet, few games manage to truly capture the look, feel, and crude, grueling nature many of those titles possessed. No Pest Productions’ Driven Out seeks to excel on this front, fully immersing you in the grind and visual flair you might have experienced in a brutal late 80s Genesis or Amiga game. The gameplay feels like a strange blend of Castlevania, Dark Souls, and Amiga’s Shadow of the Beast, with its charming early 16-bit aesthetic, laborious, grind-it-out swordplay, and array of colorful baddies; most of whom which will give you fits. Driven Out is a peculiar experience, as it manages to be both maddening and enticing; simplistic and teeth-grindingly tough. You’ll be hard pressed to put down that controller as you seek to get revenge on the werewolf that killed you for the dozenth time. With that said, you’ll need the patience of a saint to want to stick with this one in the long term, given its repetition and punishing gameplay. 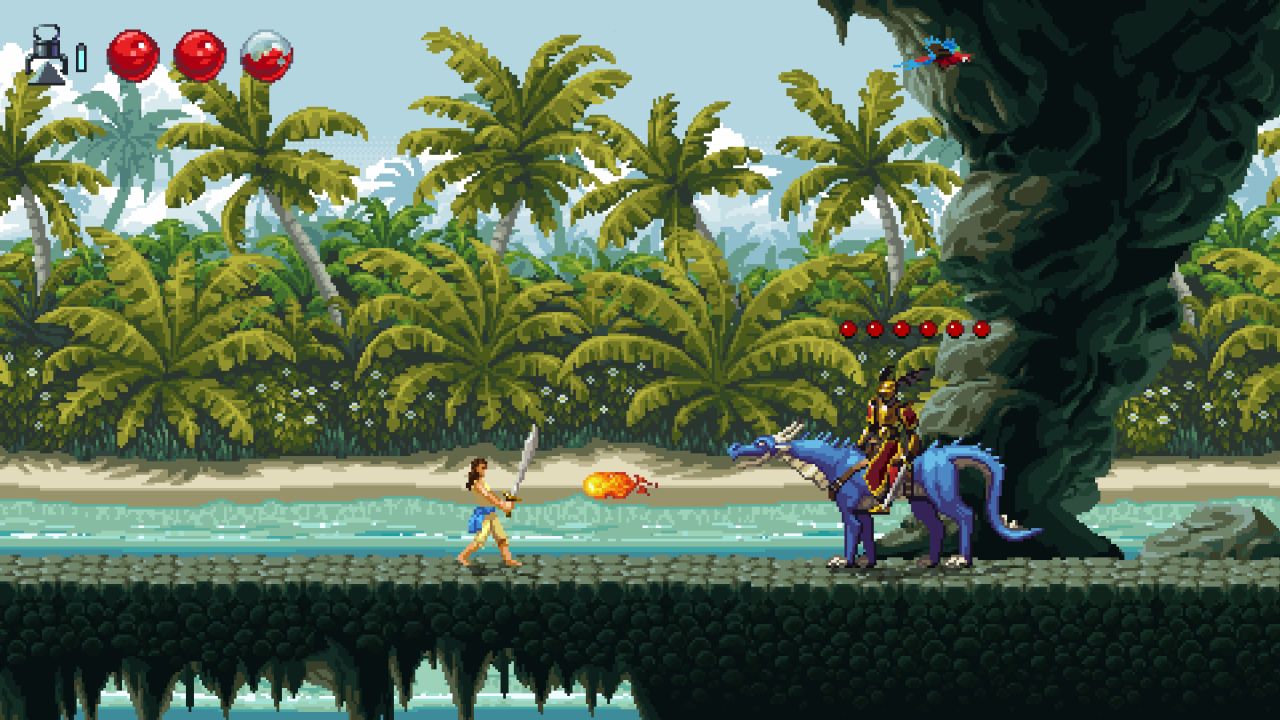 The first thing you’ll notice as the game begins is its delightful sprite-based graphics. Driven Out certainly stays true to its oldschool presentation for the most part, maintaining a rather archaic, flat aesthetic throughout. Yet, the artwork itself feels rich and is a joy to look at, as are the simple melodies that sound like they’re ripped from an early Genesis title. From the surprisingly fluid and detailed animations to the colorful, lavish backgrounds of many of the biomes - including a trippy mushroom area and gothic-style castle - there’s much to love about this style. The gameplay also proves charmingly classic; though it’s not without aggravations and imperfections.

After a couple of simple title screens and a brief opening animation, you’re basically sent off to fend for yourself and stumble through Driven Out’s ambiguous gameplay. Luckily there really isn’t much to learn. Essentially the only glimpse of narrative comes from the opening scene, which shows a humble farmer working on her crops, before a strange relic drops from the sky, which she curiously picks up. This turns out to be a “witchcraft” device that’s used as temporary checkpoints, which can be dropped twice per zone - and trust me when I say, you’ll need this. As a side note - you’ll also be granted permanent saves after grinding through each of the insane boss fights throughout your journey. Anyway, after an unknown knight literally stumbles into the scene and tosses you a sword, you’re coaxed to venture forth and take on the bands of hostile knights, monsters, and even alien foes that roam the flat 2D stages.

Your sheltered, humble existence as a farmer is made clear as you’ll quickly notice just how much our protagonist struggles to even carry her large sword, let alone swing it effectively. Yeah… Dynasty Warriors, this is not. Each swing essentially must be calculated in terms of timing and location, as landing one clean swipe will leave you exposed and take a few seconds to land. On top of this, enemies typically seem to land their strikes with just a tad more swiftness than you, making fast reaction times and pattern recognition crucial. This style of combat - which is more of a violent dance of acting and reacting to your opponent - is really the crux of Driven Out’s gameplay. Since there is no system of upgrades, unlockables, or real level design for that matter, everything hinges on the one-on-one battles. 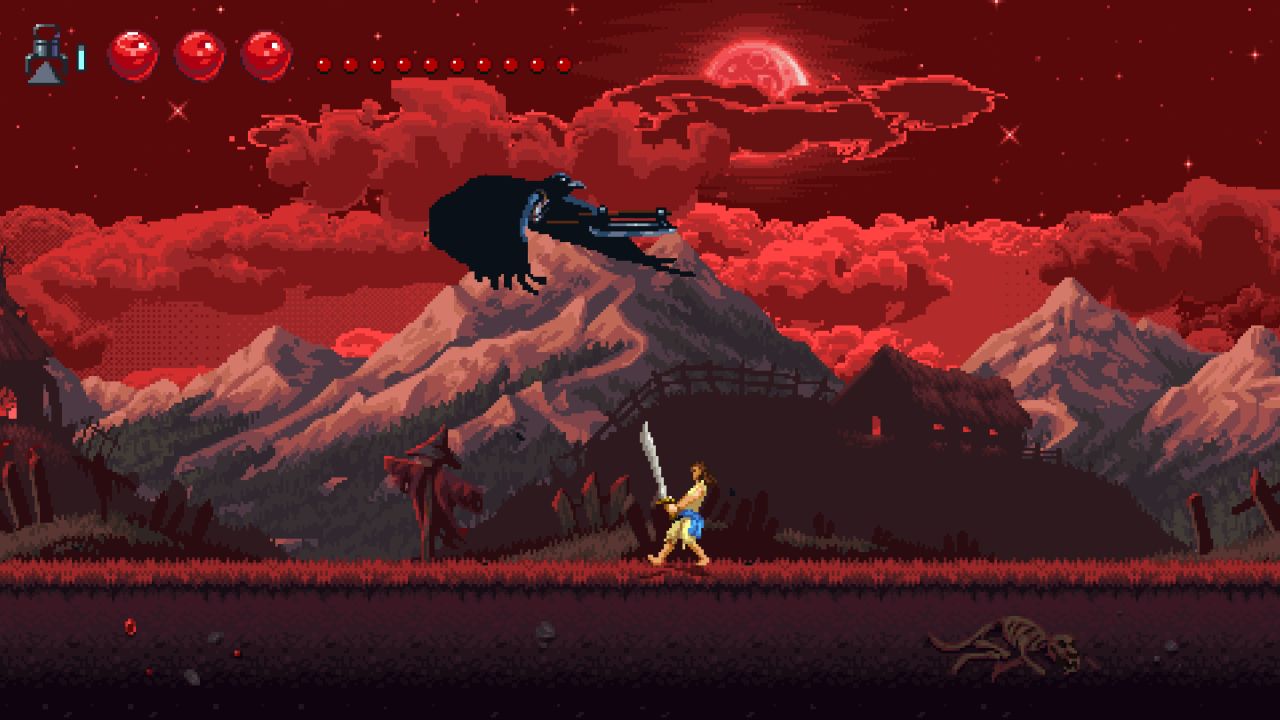 Still, the nuances of the combat and fantastical foes you’ll be fighting tends to be enough to hold up, at least for a time. These 2D sword-slashing romps may look and sound simple, but they’re anything but. You’re only given 3 pieces of health, while your opponents tend to yield 2 or 3 times that amount at least. To put it into perspective, it took me roughly an hour just to grind my way past the first two farm and castle areas and the gaggle of knights and werewolves that stood in my path.

On top of this, there are 3 directions you’ll have to guard from, which you do by holding the R trigger and either the X, Y, or A button to block attacks either from above, down low, or chest level. In addition, you have the ability to run, or slowly, awkwardly turn around - which is useful considering you’ll be traveling both directions throughout the game. And that’s basically it in terms of commands. Everything else just boils down to landing a hit at the right time and anticipating where an enemy will attack.

The most intense - and often frustrating - aspect of blocking is that most of these foes seem to go in for hits in random locations at random times. This means you’ll need to recognize specific animations to know when and where to block, which isn’t always easy to pinpoint. These efforts made for some exciting, heart-pounding combat that kept me engaged, even prompting a few victory cheers; after which I felt a bit silly.

Still, with how erratic and quickly some of the foes can hit, the deck can feel immensely stacked against you for much of the game. While your chest-high strikes will land quicker, so will theirs, making it tough to react in time. Enemy hits from high and low will give you more time to react, but again, yours take longer to land too. These traits can make the combat feel like a no-win scenario at times. On top of this, your block mechanic can feel a touch finicky in the heat of battles; at least when quickly trying to shift from, say, a high block to a low one. Some of the later baddies are so erratic and swift that defeating them just feels futile, even after much trial and error. Your patience and will to carry on may start waning after continuously being trounced in mere seconds. As fun as the core gameplay is capable of being, you can only be pummeled to death by that hyper-active bird or that massive armored bear so many times before you’ll want to call it quits and retreat back to the simplicity of farm life. 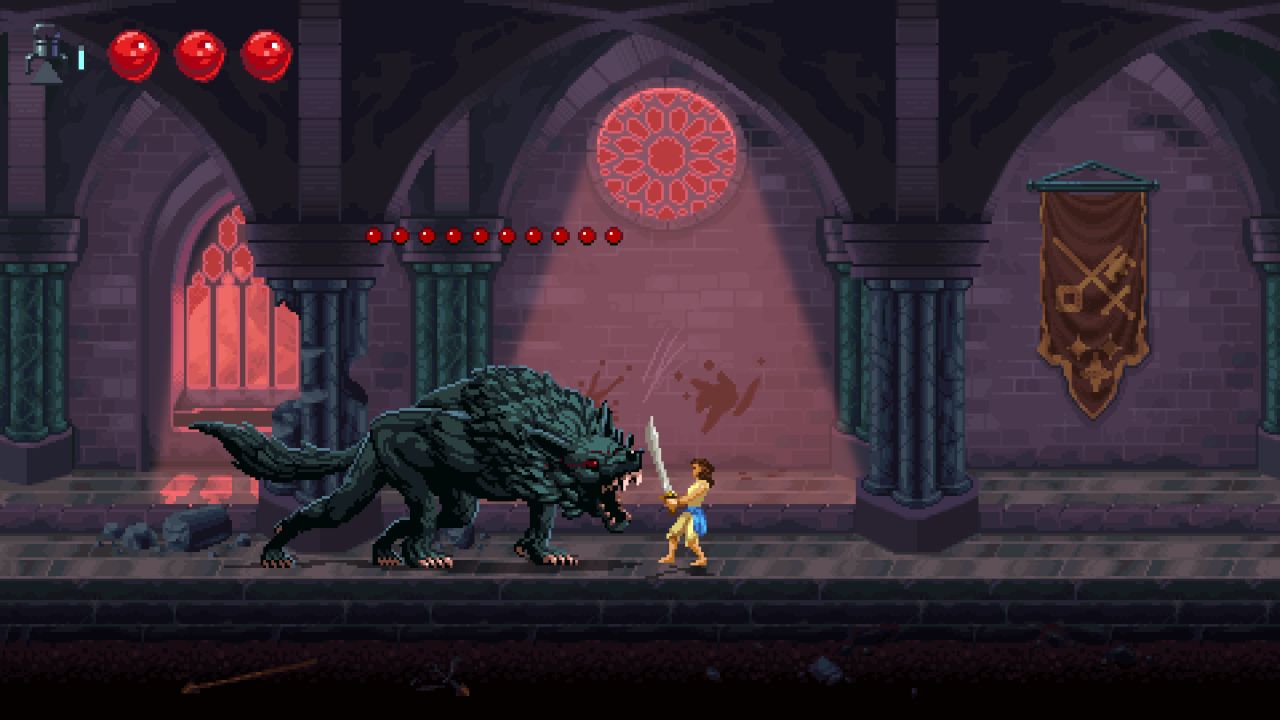 But if you do have the stomach to answer the hero’s call and make it deep into Driven Out’s campaign, you’ll be rewarded with some pretty awesome environments and increasingly insane baddies, leading to an amusing - and somewhat ill fitting - final boss showdown. Sure, the several seconds it takes to sweat out just one win against a single foe might make for some slow pacing - even given the short campaign. Yet, it’s these hard-fought battles that make Driven Out all the more thrilling and satisfying.

Beyond this, there’s not a ton to say about this indie. It’s a gritty, unapologetically oldschool sidescroller whose combat relies completely on sharpness and attentiveness to enemy attacks. Such an unforgiving game won’t be for everyone, especially younger gamers who don’t appreciate the nostalgic throwbacks that largely prop this adventure up. At least for fans of combat-heavy sidescrollers, though, the enthralling combat and rewarding gameplay will likely keep you roped in for longer than you might expect.

Our ratings for Driven Out on Xbox One out of 100 (Ratings FAQ)
Presentation
75
This is truly one of the most authentically-feeling retro-style games I’ve played; not just mechanically, but its delightful presentation as well. The game balances some impressively nuanced character animations and lush backgrounds with simple pixelated visuals and music that seems ripped right from a ‘91 sidescroller that never was.
Gameplay
68
The mechanic of attacking/blocking high, low, or chest level is at once basic and enticingly effective. While it tends to work in its execution, it’s extremely tough to grasp effectively during the later portions of the game, which flings increasingly crazy and erratic baddies at you.
Single Player
65
The campaign is pretty minimalistic, which is part of its charm (especially with its lack of narrative fluff). But with how much you’ll likely be dying and restarting, there isn’t a ton of substance to keep you captivated during this otherwise brief, literally straightforward journey.
Multiplayer
NR
None
Performance
70
Starting up this pretty stripped-down retro-style game drags on a bit more than it should, but no apparent performance issues otherwise.
Overall
67
The core gameplay of Driven Out proves solid and satisfying, and is enhanced by some super nostalgic retro sensibilities. Yet, the combat just seems a touch too slow on your part and imbalanced in favor of your AI opponents, which tends to make it tough to stick with the basic, somewhat repetitive gameplay in the long run. 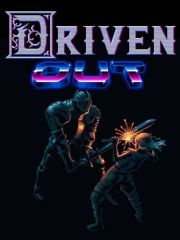