Back when I got my first PlayStation console, one of the titles I remember putting a ton of time into was MediEvil. SCE Cambridge’s 3D platformer sported a great look, and was fun to boot. It was always strange to me, then, that Sony basically abandoned the franchise after one sequel. Perhaps due to the recent success of other remakes, Sony finally decided to dust off Sir Daniel for a new generation. With his previous creator shuttered, though, remake duties fell to Other Ocean Emeryville. 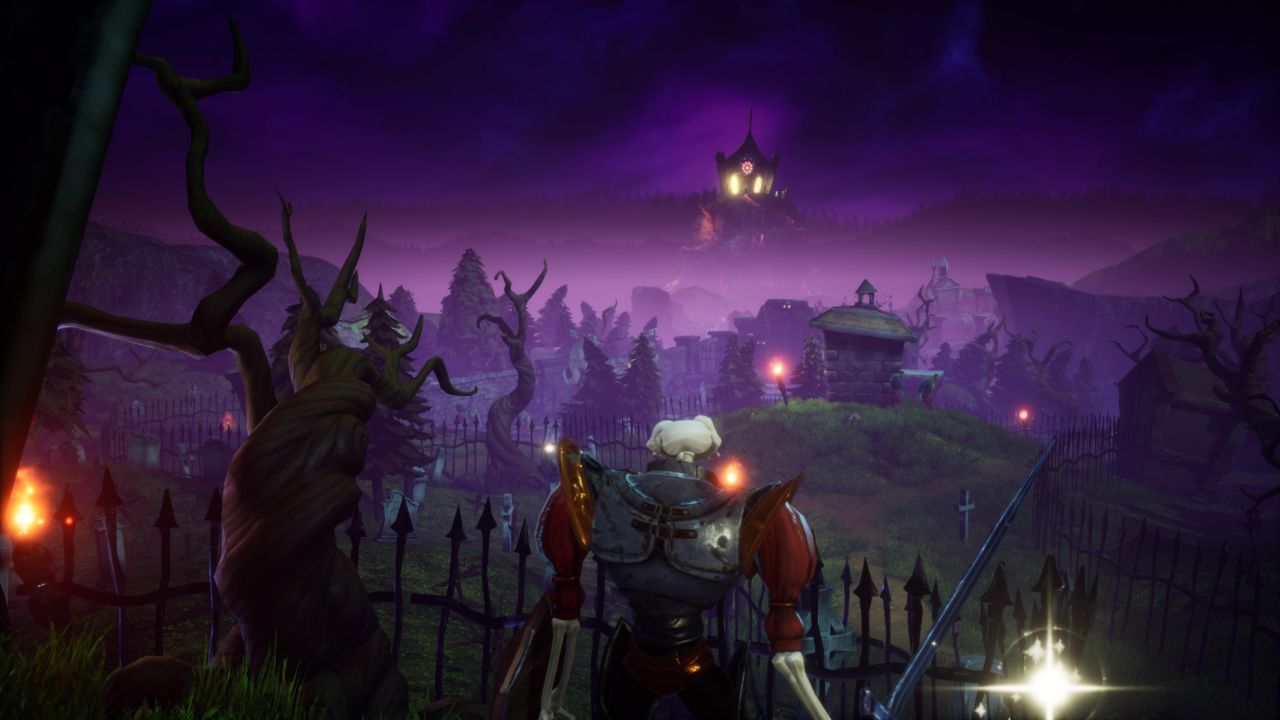 In spite of the truth surrounding his actual demise, Sir Daniel Fortesque was remembered as a legend. A warrior who fought the good fight against the evil necromancer Zarok. In reality, though, Sir Dan contributed little to the battle, and was actually killed off almost immediately. Thanks to the return of the sorcerer, however, Fortesque has been granted an opportunity to be a hero. And if he can stop Zarok once and for all, he will finally be inducted into the iconic Hall of Heroes.

It was great to see MediEvil’s charm still shine after all these years. There may not be a ton of depth to the redemption of Sir Daniel, but what’s there is fun to witness. Watching Fortesque rise from bumbling failure to, well, bumbling hero is even inspiring in a way. The whole endeavor is just deeply silly, and the humor of the title has aged far better than other relics from its time. I do think we could have used a little more time with Zarok, as it would make taking him out even more satisfying. However, I also understand that the story is more focused on Sir Dan’s humble rise, so I get why there may not be as much attention paid to the villain.

A shame then that most of the remake doesn’t hold up nearly as well. Coming out during a time where 3D platformers were all the rage, MediEvil wasn’t exactly unique in 1998. It was adequate, which was more than enough to get by at the time. Unfortunately, what was acceptable 20 years ago isn’t exactly acceptable now. Standards have changed drastically in that time. While I can appreciate that Other Ocean Emeryville was trying to be as faithful as possible, I don’t think that was the direction to take. 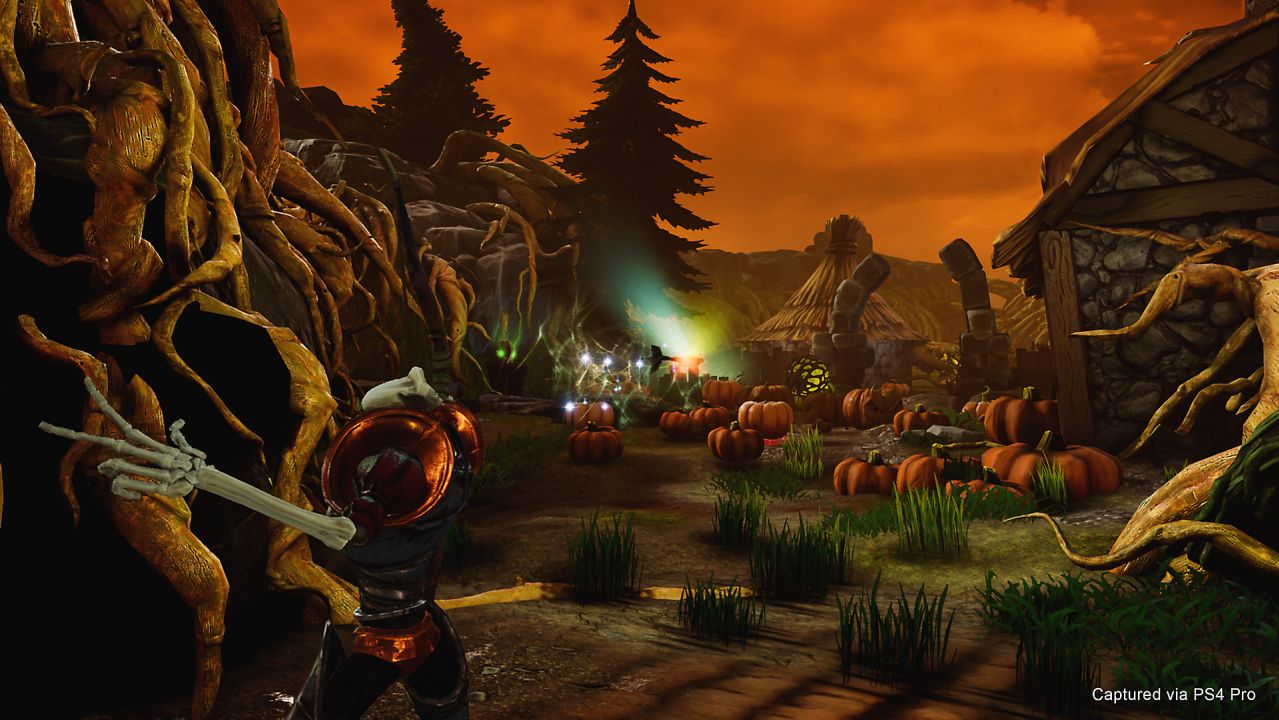 The aspect that feels most dated must be the combat. Over the course of MediEvil’s campaign, Sir Dan will acquire a variety of different weapons. Magic infused swords, mystic dragon armor and chicken drumsticks just to name a few. Despite the variety, though, none of them are enjoyable to use. This stems from the fact that fighting enemies can be described as sloppy at best. Hand-to-hand combat devolves into running into battle and button-mashing wildly. Aiming with long-distance tools is even more annoying. Thank god for auto aim, because without it, I’m not sure you’d be able to hit anything. It’s a bumbling, annoying combat engine that has aged as well as Sir Dan looks.

Not helping matters is the title’s archaic camera system. On the default setting, the camera is an absolute chore to deal with. You essentially need to baby it at all times in order to have something even remotely usable. It’s an unwelcome reminder of just how rough things used to be in the early days of the genre. Whether the camera is fixed or free, it’s nothing but a pain. The remake does introduce the Dan Cam, which shifts to a behind-the-shoulder view instead of an over-the-top one. Although an improvement, it’s still far from ideal.

The clunky camera also wreaks havoc on the already shaky platforming aspects of MediEvil. While nowhere near as bad as others in the genre, there are some tricky jumping and maneuvering areas in the game. The stiff controls make these sections annoying to deal with to start, but once you throw in a camera that tends to obscure things, they’re even more frustrating. Again, all of these cumbersome quirks are holdovers from an era that is no longer palatable. If you’re going to wait all this time to resurrect the series, why not shake things up a bit? Replicating the dated gameplay to a tee is a maddening decision. 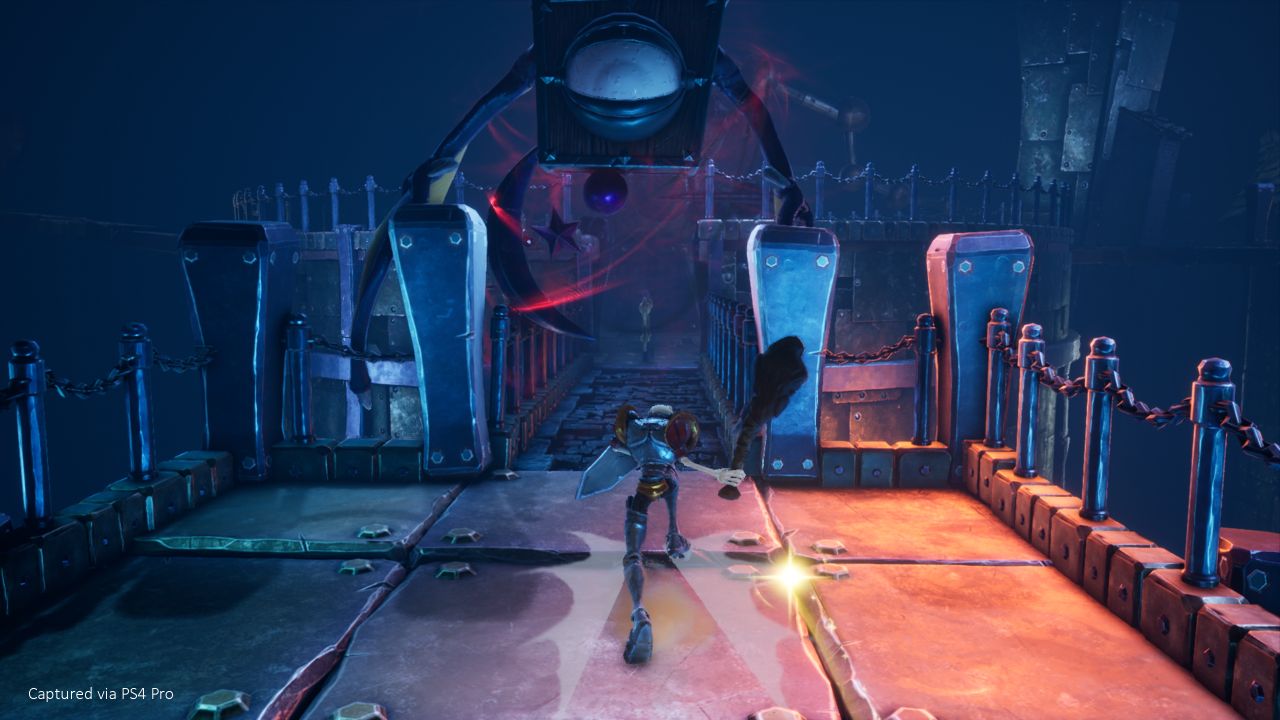 The developer at least did an excellent job of bringing the world of MediEvil into the current generation. Much like the charming story, the art design of the title helped it stand out at the time. Other Ocean Emeryville did an excellent job of taking that artwork and recreating it for a new audience. Sir Daniel Fortesque is a bumbling, wonderful hero, and the enemies he has to slay all have fun designs, too. The levels are full of color and eye-catching garnishments that really make them feel lived-in. There was also great care put into the sound design, specifically the dialogue. A mix of old and re-recorded, the voices add a great deal of personality to each character you come across. The soundtrack has also been re-recorded, and it’s Danny Elfman-aping design still fits after all these years.

There are issues to be found with the title’s performance, however. During certain sections of the game, most notably Scarecrow Fields, there’s noticeable lag. Even when there aren’t a ton of enemies on-screen, the action still slows down. Near the end of the game, there was also an instance of one of my weapons getting stuck in a wall after an enemy stole them. Finally, during certain cutscenes textures didn’t properly load. Finer details like cobblestone took a bit to load up, leaving them blank slates for part of the scene. While they did eventually show up, it’s still quite noticeable.

The problem with MediEvil is that in trying to stay so true to its roots, it forgot to evolve with the times. Parts of the original game that were fine enough twenty years ago aren’t now. The combat is a sloppy, unfocused mess and the platforming is hindered by an inefficient camera. There are still parts that shine with the new polish, particularly the art design and story, but those aren’t enough to make up for the rot. While I’m happy the series is getting another shot, I wish it wouldn’t have been with one foot still in the grave.

Our ratings for MediEvil on PlayStation 4 out of 100 (Ratings FAQ)
Presentation
80
Although the occasional bug prevents it from being perfect, MediEvil is still a gorgeous reimagining of the original title. The level designs are full of personality, and the character work is incredibly charming.
Gameplay
30
When something can be described as sloppy at best, you know things aren’t going well. The hack and slash platforming of MediEvil has aged as well as a decrepit corpse. It may not be broken, but it sure as heck ain’t good.
Single Player
65
Entertaining and humorous, the off-beat tone of MediEvil has aged rather well. Additional depth for the various inhabitants of Gallowmere would not have been the worst thing, however.
Multiplayer
NR
Performance
55
On a base PlayStation 4, the remake struggles with framerate issues in certain levels. Cutscenes are also victimized by pop-up textures that are incredibly noticeable.
Overall
50
MediEvil is a remake that should have taken more chances. Specifically, the gameplay needed to be reimagined for a 2019 audience. Instead, it just feels dated and obnoxious in a way that spoils its redeeming qualities. 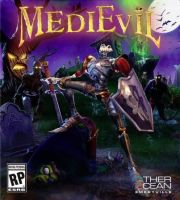 All videos for MediEvil (4)
Advertisement ▼