Deliver Us The Moon Review

An abandoned base, on a silver platter

There is an inherent fascination with abandoned places. Exploring vacant buildings allows us to wonder about the lives of the previous occupants. This intrigue is only enhanced when that place was vacated quickly under mysterious or catastrophic circumstances. Games can present abandoned locations with a much finer clarity than real life, and they can dream up any fictional scenario that might enhance the mystery. Such is the case with Deliver Us The Moon, a game about the aftermath of a Moon base that stopped communicating with Earth. In a similar style to both Tacoma and Adr1ft, the title mixes exploration with a subdued personal story. While it doesn’t send a clear signal, the setting and mystery are worth checking out. 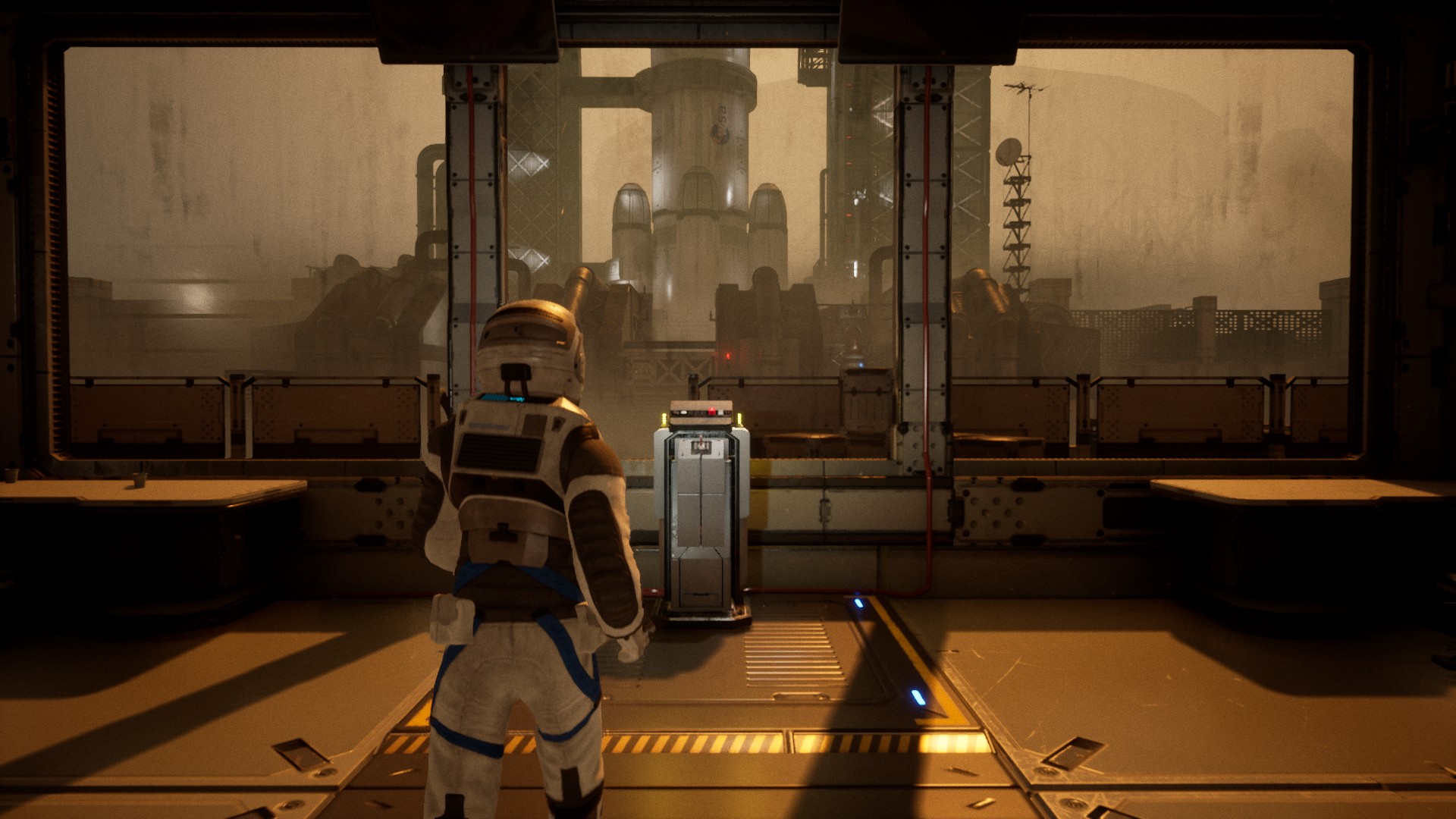 Launch conditions on Earth are not ideal

The Earth has gone to hell, and it is even worse in Deliver Us The Moon. In 2059, dust storms and high temperatures have made regions around the equator inhospitable. With fossil fuels nearly gone, humanity has turned to the Helium-3 reserves on the Moon. Power from the Helium-3 fuel is transmitted across space via microwaves—groundbreaking technology that has allowed humans to survive. But five years ago, the signal ceased and the Moon base went quiet. In the time since, the World Space Agency has shut down and humanity is on its last legs. You are a nameless member of a team that has set about returning to the Moon and switching on the power.

While the premise is interesting, there are some conceptual problems that raise an eyebrow. The story insinuates that no other rescue mission from Earth was attempted in the five years since, which is strange given how much humans rely on the remote power. And only one astronaut (you) will make the perilous journey to try and fix the Moon base, even though the rocket could easily hold a few people. Some minor tweaks could have improved plausibility of the story setup.

Despite this, the story arc is appealing. Starting on Earth, you prepare the rocket and then launch into space. From there you board the Pearson space station that connects to the Moon via a space elevator. And finally, you reach the Moon base itself. The game does a great job of introducing new mechanics at each stage and providing clear instructions. Representing the entire journey in this condensed form brings drama, a sense of progress, and a variety of obstacles.

On Earth, the game introduces the basics. You’ll walk around in third person and solve a few minor puzzles, interact with computer terminals and try to board the rocket before it launches without you. Much of this early part is simple, but the context and Earthly backdrop helps to remind the player what the mission is about. 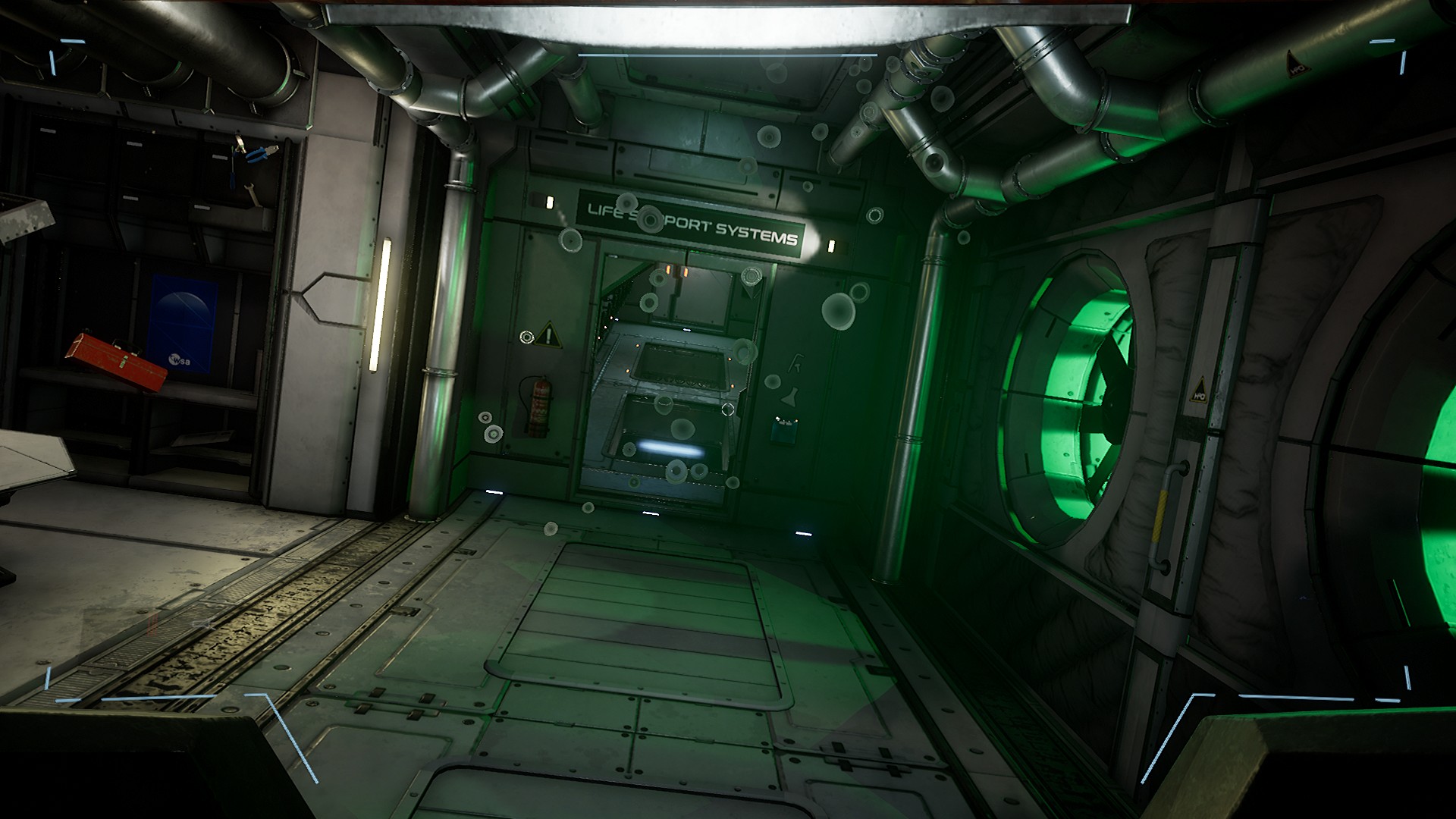 Zero-g environments on Pearson station might cause motion sickness

The Pearson space station section is eerily reminiscent of Adr1ft because it has full movement freedom in a zero-g environment. There are oxygen canisters that need to be grabbed just to stay alive. It is easy to get turned upside-down with no gravity, so it is fortunate that the station is quite claustrophobic and linear. Even still, those prone to motion sickness might need to take a break or ten. It is here that the game changes from third person to first person, probably to improve navigation and minimize camera issues. The abrupt change is disorientating at first but not the only switch in perspectives.

Down the space elevator is the Moon base and the bulk of the game. The player follows in the footsteps of an astronaut from the Pearson space station: Sarah Baker. She took the elevator down to uncover why there was a blackout and never returned.

Holographic animations, voice recordings, and emails, help piece together the events leading up to, and following, the blackout. Uncovering the mystery is the best part of the game although it never provides clarity for its biggest questions. Important characters from the Moon base are not given enough screen time. Too much guessing is involved and the player’s database seems to know more than what is presented in the individual story pieces. Unfortunately, the Moon base story is not amicably concluded, despite many layers of intrigue. 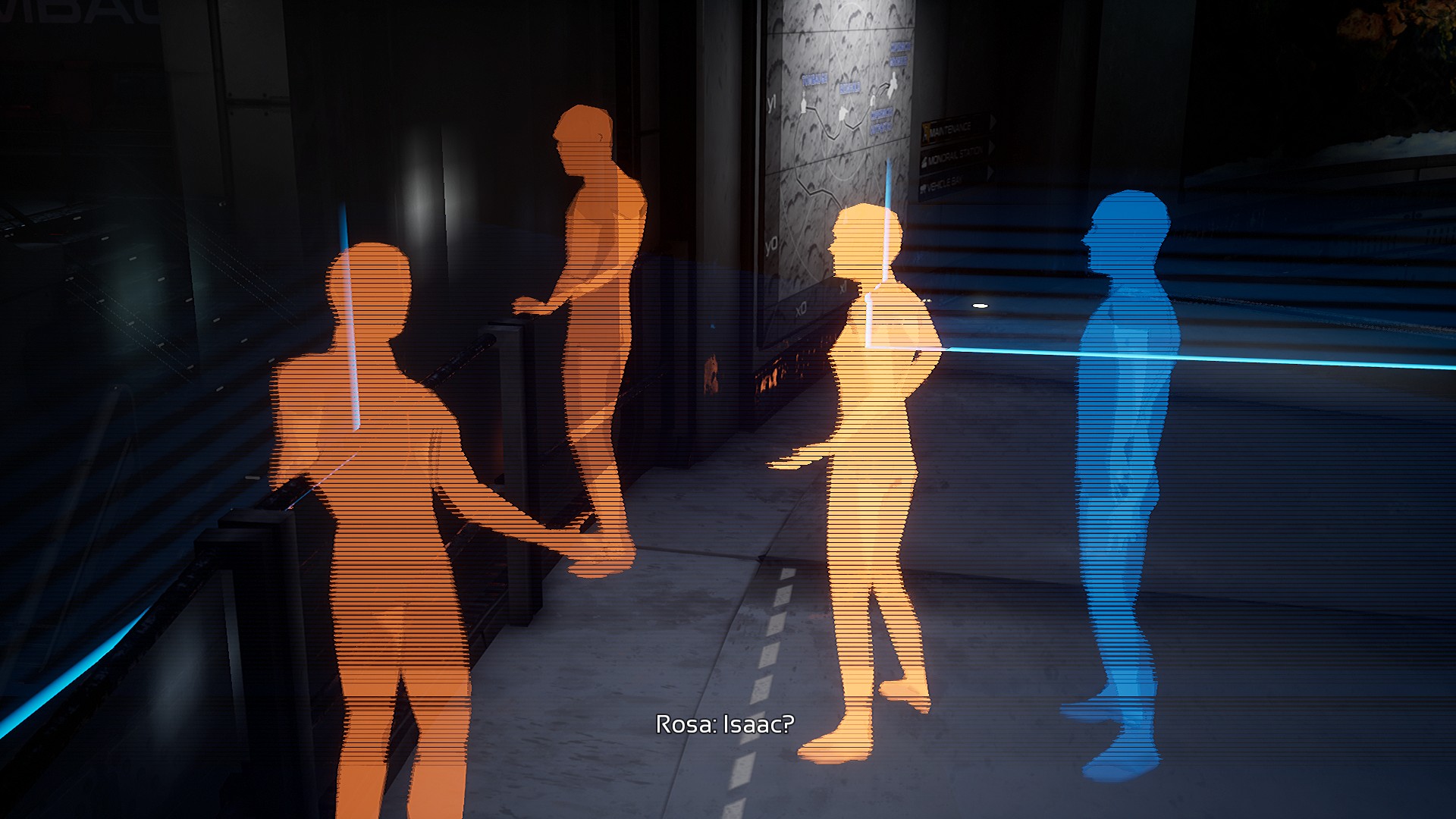 Sarah Baker’s journey is given more attention, despite it not being the focus until reaching the Pearson space station. We see remnants of her navigating through the abandoned base, trying to restore power and survive. She interacts with one of the base’s occupants and this pairing drags the player along. Sadly, one of these characters does not get a proper resolution.

While story is vital, there is plenty of interaction in the game. The engagement level is much higher than a traditional walking simulator, despite all the walking. Basic tasks include moving power cells, using terminals, and finding door codes. A laser cutter will open bulkheads and physical objects can be used as battering rams. Those keen on jumping about will have fun during a few platforming sections involving ledges or electrified obstacles. It is not a puzzle game but there are enough minor challenges around to keep the brain working.

The biggest puzzle tool is actually a robot companion, ASE. This robot helps the player navigate by squeezing into tight spaces. It is remotely controlled and guided through vents to activate switches. ASE does not have much functionality but there are some puzzles that require positioning and deeper exploration. Despite the story teasing that ASE robots have strong personalities, it is no more than a floating hunk of metal that hovers nearby until needed. The lack of voice, or any real emotive communication, is a huge missed opportunity. 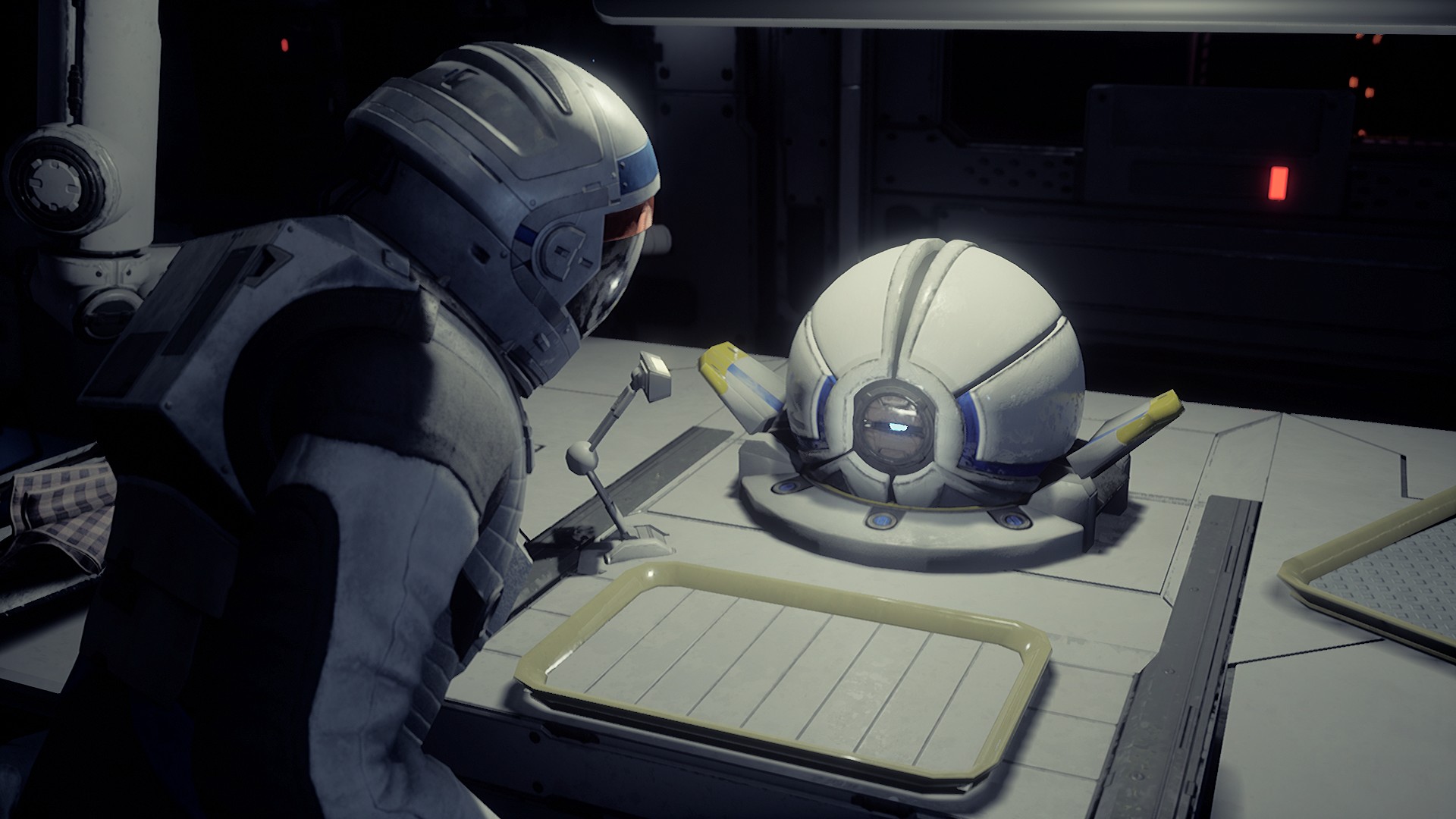 The ASE robot is important but functionality is minimal

The adventure is also too linear for the world to take on a personality. Linearity is a good thing in the early parts of the game, due to the tutorial phase and the zero-g navigation, but it hurts on the Moon. Sure there are times when a lunar buggy can be driven across craters, but its range is limited and all you do is align dishes for power transmission. To progress to the next settlement, a scripted monorail must be used. The linear style extends to the base interiors, because there is usually only one way to progress, with many objects blocking the path artificially. It is possible to miss story information (like letters) but that’s more often down to their placement than missing areas.

The game has good production values, especially visually. There are many stories told via the world, like scratches on the walls, beds stacked haphazardly, exercise equipment still running, and mementos left in domiciles. Interiors are consistently designed with good textures. The undulating Moon exteriors are great to drive across and look nice out the window of the derelict bases. Story moments told via holographic projections are low polygon and take the presentation down a few notches; main characters of the same gender cannot be distinguished by shape alone. Their voices are at least usually quite distinct and the cast does an amicable job with the limited dialogue. Some low tempo classical music helps to enhance the feeling of isolation. 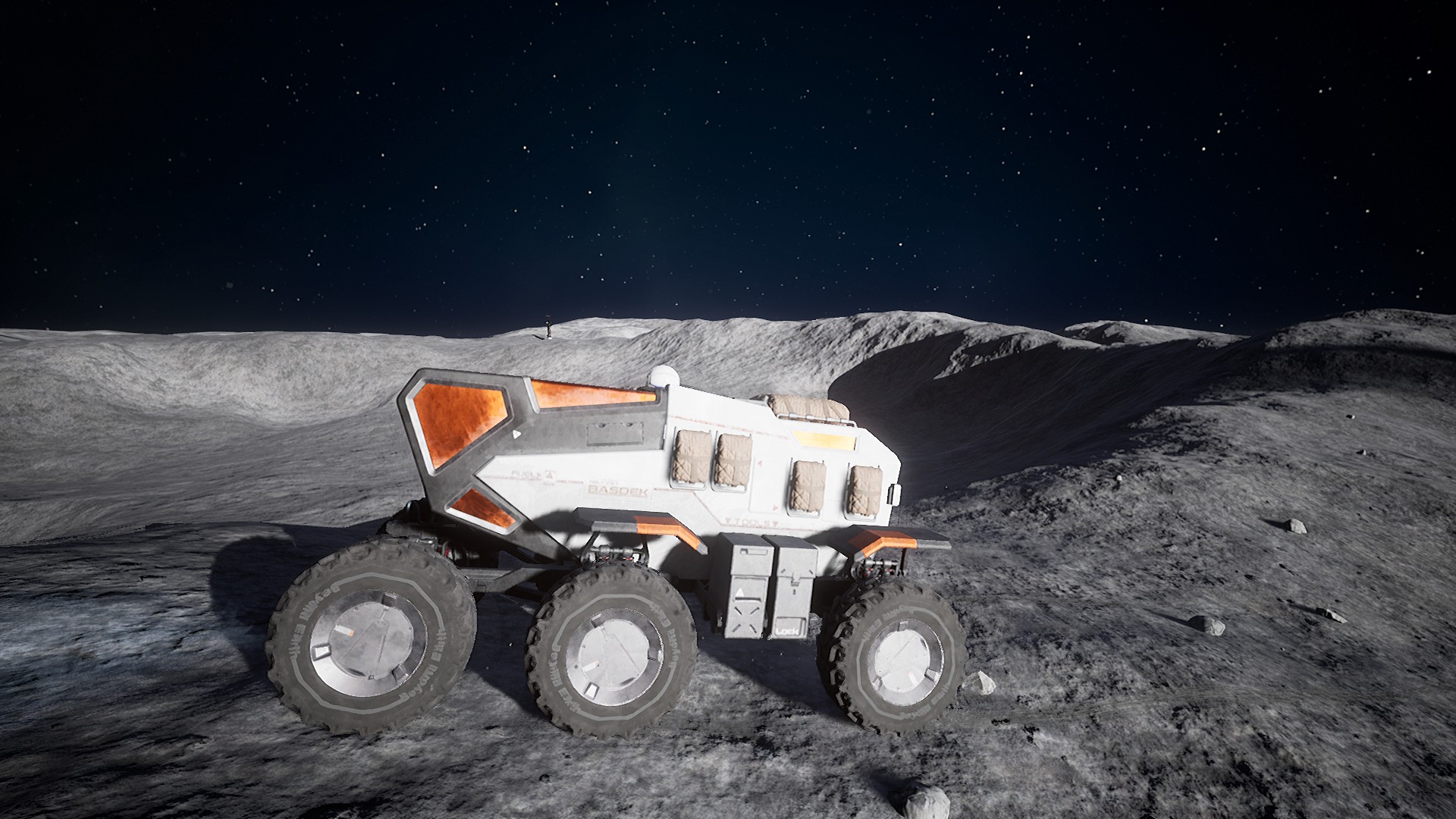 Deliver Us The Moon provides a solid mystery linked to a remote location that is detailed enough to persuade exploration. By featuring the entire journey, from the Earth to the Moon, it has suitable variety and a pleasing structure. Interacting with the world is simple but substantial enough to keep the player busy, but the bland robot companion is a huge missed opportunity. Although the abandoned base is fun to explore, a more open layout would have worked better. The game has many good qualities, even if it hides answers on the dark side of the Moon.

Our ratings for Deliver Us The Moon on PC out of 100 (Ratings FAQ)
Presentation
80
Voice work is reasonable and the music adds a nice sense of loneliness. Good space base interiors and some nice moonscapes round out a solid package.
Gameplay
65
Simple tasks, but enough of them to keep the player occupied. The robot companion could have been more interesting and the world might have excelled with less linearity.
Single Player
70
The story has some plausibility issues, and there are some big questions that it fails to answer. But, overall, the narrative offers plenty of intrigue and some personal drama over the five hours.
Multiplayer
NR
N/A
Performance
(Show PC Specs)
CPU: Intel i5 3570k
GPU: XFX RX 480 GTR Black 8GB
RAM: 16GB DDR3
OS: Windows 10 Pro 64-bit

75
No serious problems with performance after the latest patch. There are some lower framerate sections but they usually don’t last long and the dips are not too severe.
Overall
71
Deliver Us The Moon offers a strong mystery on Earth’s natural satellite. Plentiful world interaction, detailed environments, and a good structure help with pacing, although linearity and a lack of definitive answers make for a rough landing. 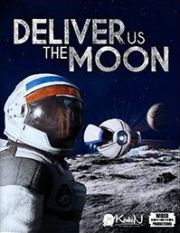