The GRID racing series has been on a downward spiral since its inception. The original Race Driver: GRID is still the best in the franchise. GRID 2 was a decent sequel, although completely forgettable. And GRID Autosport packed every ounce of fun into an expensive car and drove itself off a cliff. Codemasters have decided to reboot the franchise, five years after the last entry. 2019's GRID is not a remake or a remaster; it is more like a sequel to Autosport with an emphasis on shorter races and aggressive driving. While these arcade changes are good news, the downside is that it has fewer tracks and most of them are recycled. This is a racing game that takes half a step forward, from a game that was already two steps back. 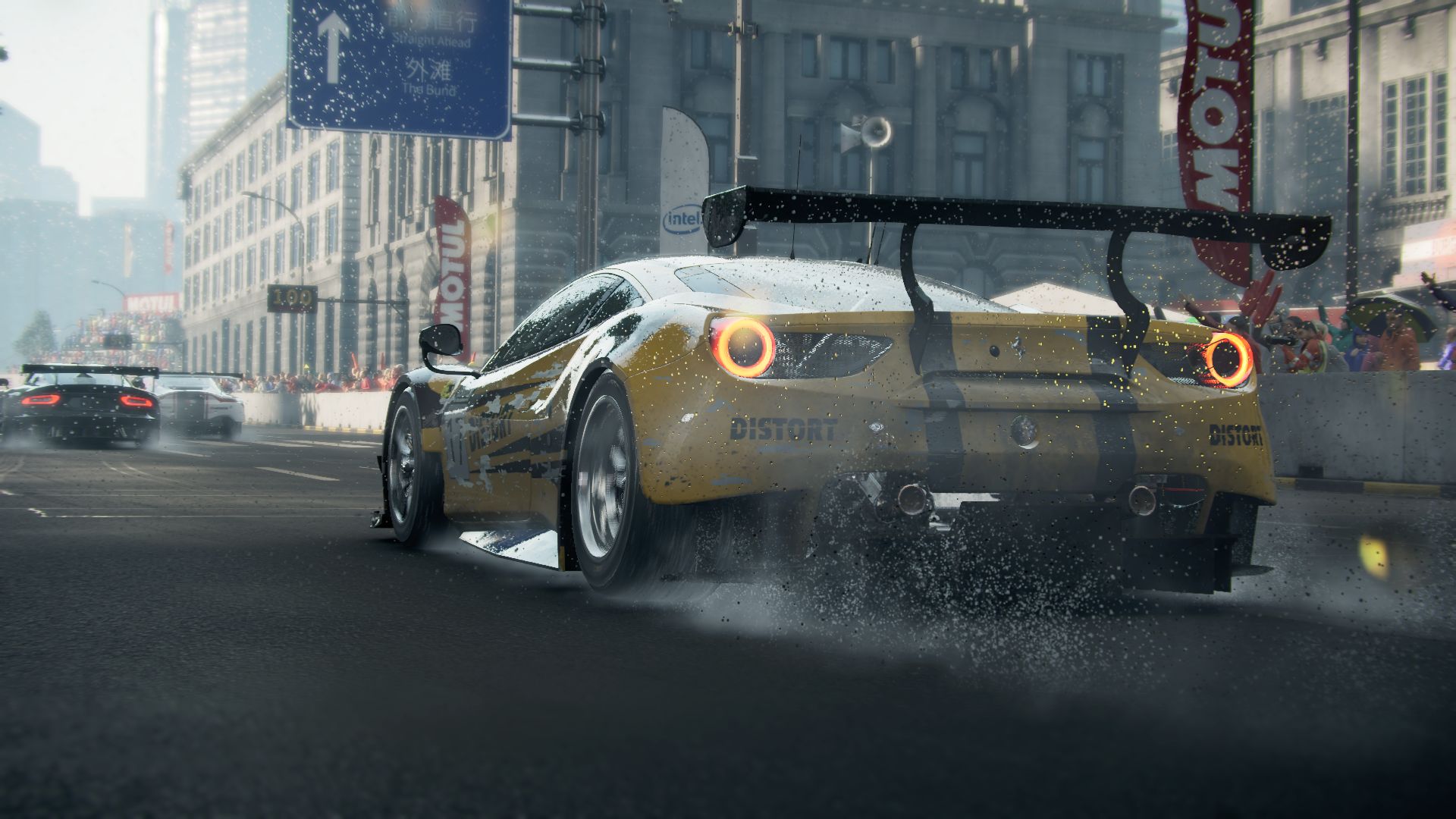 GRID is more of an arcade racer than the last game, and this is a better fit for the franchise. It’s not just arcade because of the default settings. Races are short. Bumping into other drivers is encouraged. Repair costs are negligible. Rules for cutting corners are fairly lax. And the damage modeling is almost nonexistent. There is also a point system that you can accrue in races by passing cars, drafting, drifting, and following the race line. Leveling up with these points gives you access to car liveries and new teammates. Don’t worry, though, you still earn money to buy cars in the career, even if it is rarely needed with loaners available.

The career itself is broken into a series of short events presented on a large grid. This makes it easy to track progress and jump between categories. Events are broken into six categories: GT, Touring, Tuner, Stock, Invitational, and Fernando Alonso. The first four are self-explanatory, focusing on specific cars and tracks. Invitational events are only accessible when you complete other events and they feature older cars. The Fernando Alonso category is basically open wheel racing and it takes the least amount of time to complete, which is ironic given Alonso’s career as a professional F1 driver.

Vehicle handling is solid in all categories and not too different from previous games. No need to worry about tire wear or even losing tires. Traction differences come into play when it rains, although not to a great extent on default settings. Essentially the car does what it’s told and you can get down to the fun part—racing. 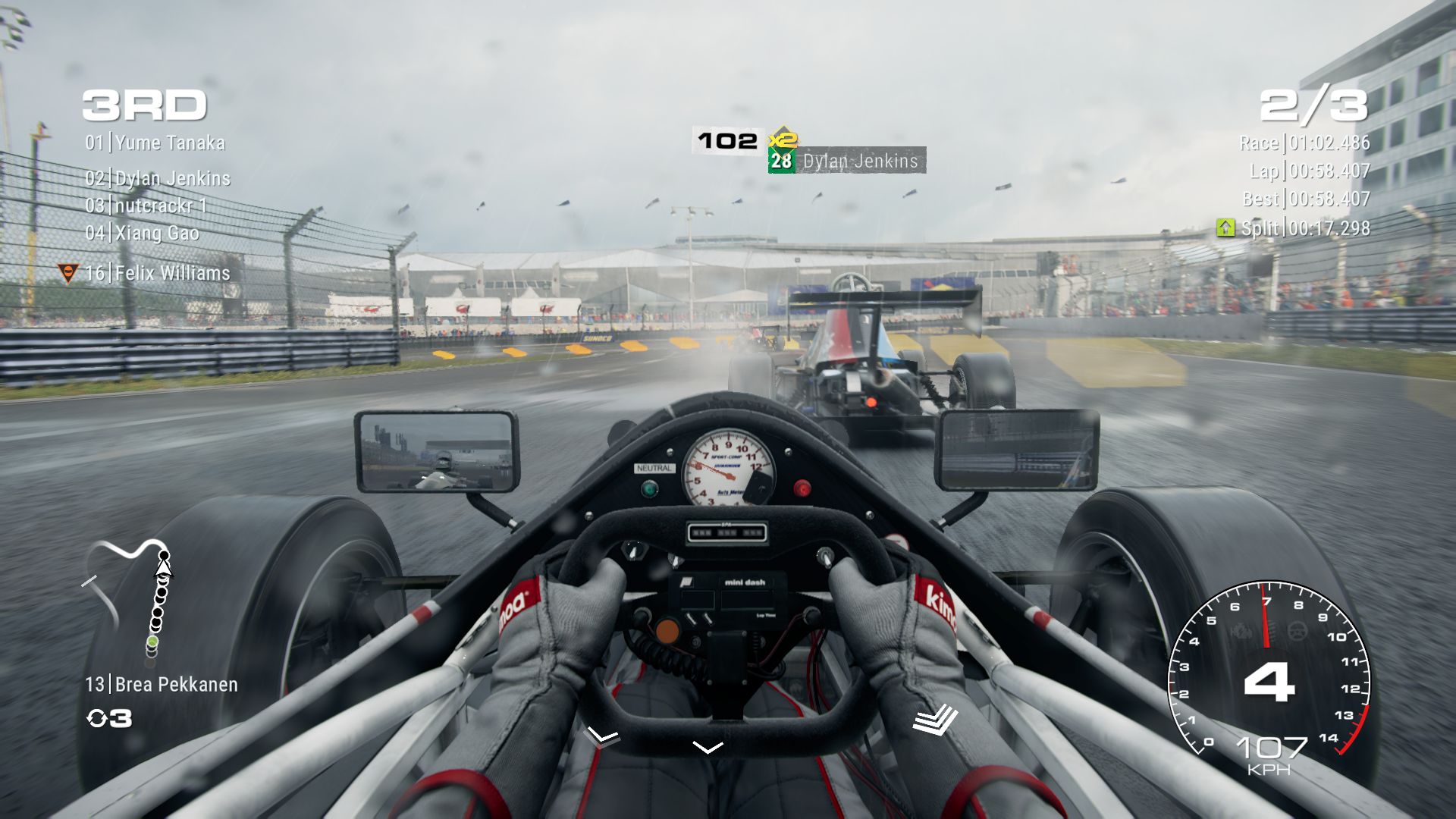 Most events consist of three races, with three laps each. They take about twenty minutes to complete, allowing players to make real progress without dedicating hours. Compared to the last game, it takes the n out of grind. The short races are great but are the first hurdle for simulation fans, as they cannot be lengthened. And arcade fans might find the career lacking in other areas because there is almost no personality here. Two commentators repeat generic lines at the start of each race and only offer something new when you get to the finals—unlocked after completing 11 events in any four categories. The career will take less than 20 hours to complete, with approximately half that again to finish everything. There is no compelling reason to do it all, as there is already quite a bit of overlap given the number of tracks included.

Just thirteen track locations have made it into this reboot, compared to twenty-two in the last game. And 70 percent of the tracks are taken directly from GRID Autosport. San Francisco and Barcelona return, as does Brands Hatch and Okutama. Each of them has familiar variations. These recycled tracks have minor detail improvements, such as better crowds and more trackside decoration. For some tracks, this is the fourth time they’ve appeared in the series and any improvements are growing less noticeable. Codemasters have already lined up three additional seasons (DLC) and hopefully they do not include more re-used tracks, like Paris and Dubai.

Thankfully the four new track locations are good. Two are real-world circuits: Sydney Motorsport Park and Zhejiang Circuit. These are faithfully recreated and are fun to learn and master. But the fictional street tracks, Shanghai and Havana, are better than all other content combined. Havana has tight corners with murals painted on the sides of rainbow buildings. Driving past the El Capitolio building, along a patterned road surface, provides nice eye candy. Shanghai is a different beast. It comes alive at night with neon skyscrapers, well-lit tunnels, and a wide-span bridge to cross. If only the literal color of these two locations could somehow transform into a colorful personality. The city streets offer the best of GRID and it is a shame that there were not more. 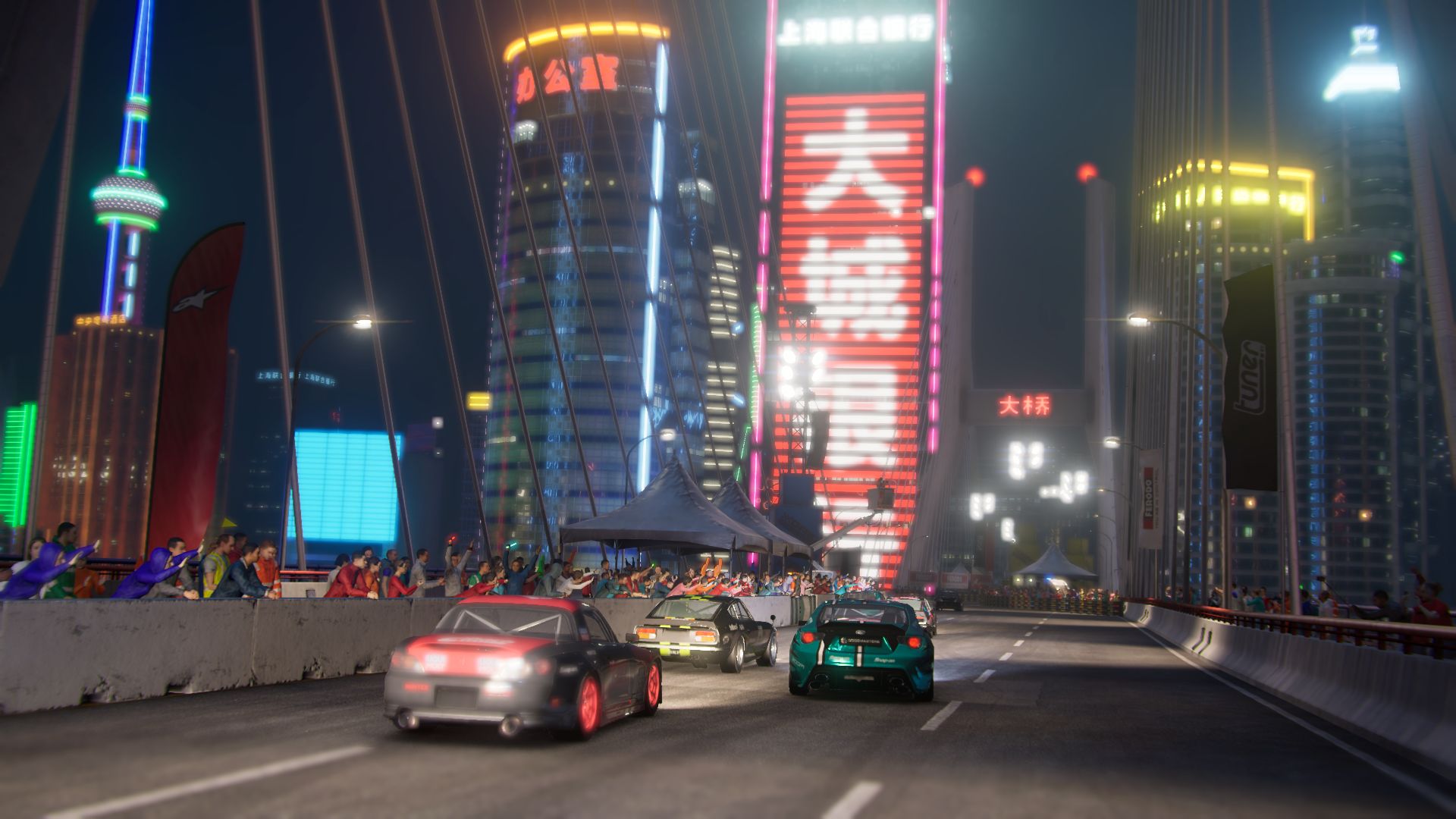 You won’t be racing alone around these tracks, so taking in the sights is a luxury for those in first or last place. Like in the previous game, you have a generic teammate, and unlike before, they’re not terrible. They occasionally follow attack and defend orders, although their final position depends more on the random starting grid than their pure skill or mid-race orders. The team management side of things is poor, with a list of teammates you can hire and not much else. Radio chatter is boring and infrequent; teammates have no voice. In general, the team side of things drifts into the background.

The other AI drivers do offer a good challenge when you begin from last place. Although you can qualify in first and maintain the lead, it is more exciting to work to the front, bumping the odd car along the way. Threading the needle between two cars is what GRID should be all about. Even on medium difficulty, AI drivers are ruthless at defending their position, crossing out in front to prevent overtaking and holding the inside line with gumption. Telegraphing your move too early will see them block progress. So you have to turn late or pretend to go one direction and actually go the other. Moving through the pack is incredibly satisfying because of the AI movements and the difficulty of squeezing past in tight circuits.

Colliding into another driver too much will turn them into a nemesis. This gives them extra speed and more impulsive behavior. They tend to hang around like a bad smell. Nemesis drivers will go out of their way to ram you and this can send you crashing into a barrier and may require the use of a flashback. While they struggle to move through the congested field, a nemesis near the front of the grid is a dangerous prospect indeed. It raises the stakes just enough to force mistakes. Shaking them off and defending requires a different skill set. If you’re clever, you will bump into your teammate to make them a nemesis; the extra anger helps them finish higher, even if they no longer follow radio orders. 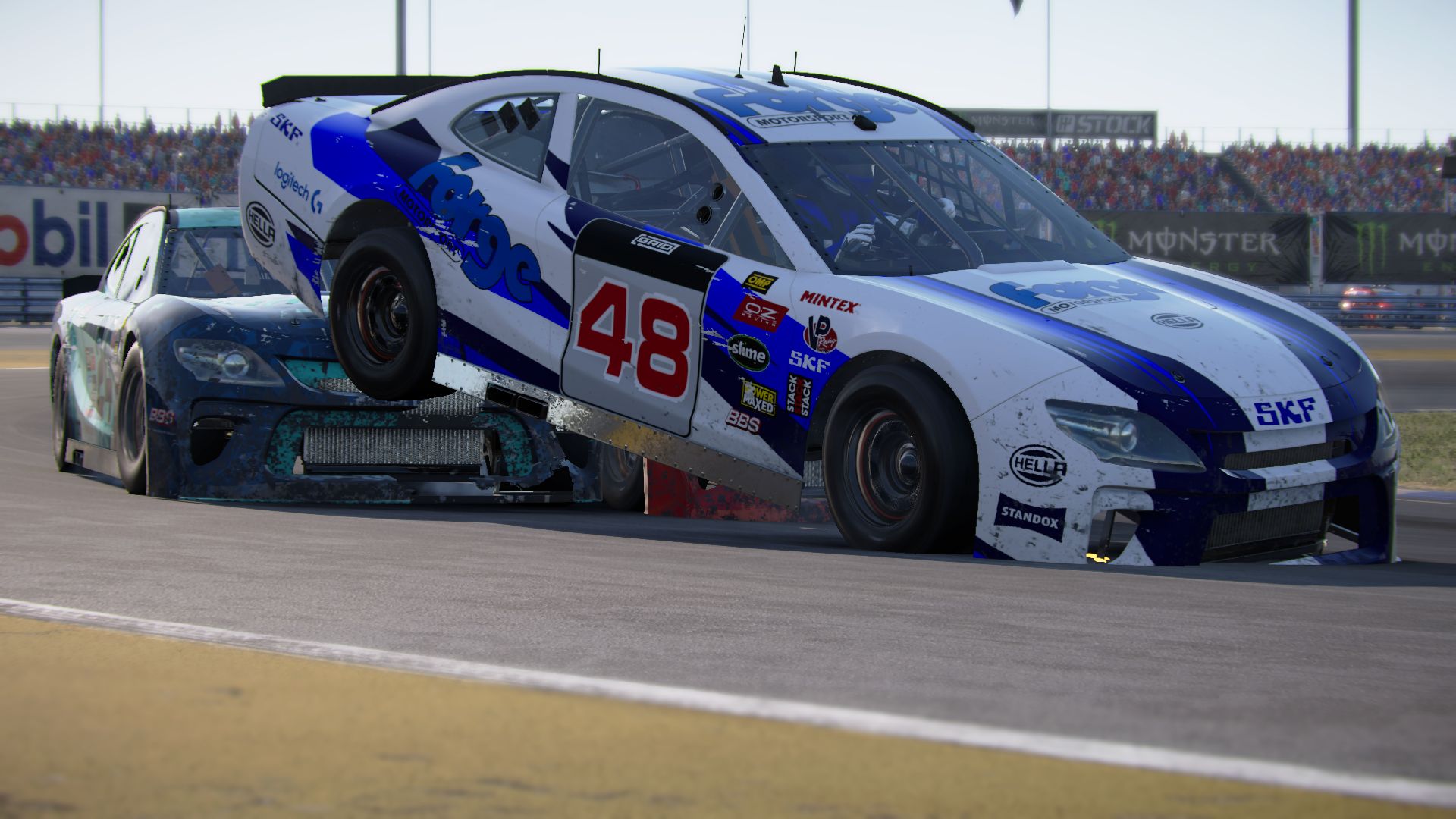 All this bumping should make for some cool crashes, right? Unfortunately not, because the damage modeling is the worst it’s ever been in the franchise. Even the original game had more dramatic crashes than what is on offer here. On full damage, cars take far too much punishment before they even look dented. Bumpers and bonnets eventually pop off unnaturally. Open-wheel cars hold onto their front wing despite repeat forward collisions. Just colliding with others is stiff and boring. In the whole career, one solitary AI driver lost a wheel and retired after limping around a few corners. Both simulation and arcade fans will be disappointed with the car destruction.

With no crashes to distract the eye, other presentation issues come to the fore. Shadows tend to pop into view on the road ahead, not far from the car. Trees have some bad transitions as you drive closer. Even textures can take a little bit of time to stream in. The performance drops too, with some poor framerates in the same sections of track.

Fortunately the game looks better in other areas. The rain effects are excellent, both on the track and on the car. Most locations have good detail, like on the road surface and for nearby buildings. Lighting is different and generally more natural than the previous games. While it is probably the best looking GRID game, it has been five years and it’s certainly not flawless.

Multiplayer is not on the same level as previous Codemasters games. There are no community events, so no point checking every day or week. The lobby browser is gone too. Only quick play and private games are available. Quick play means that you’ll be put in random events and on random tracks, which is less than desirable, and AI drivers are added if there are not the full 16 human players. Racing online works okay; collisions have muted impacts. Cars jitter when racing in a straight line and the AI are more erratic. There will be spinouts but a rolling reset means not much time is lost. There are more serious issues though. Some drivers are magically able to start before the 3-2-1 countdown finishes—a genuine game breaker. Even the timing had problems, with drivers setting negative lap times and winning the race. If all but one player leaves, the event is canceled. And the final podium displayed the wrong winners. It’s bizarre to see these basic issues from a developer with this much experience in the genre. 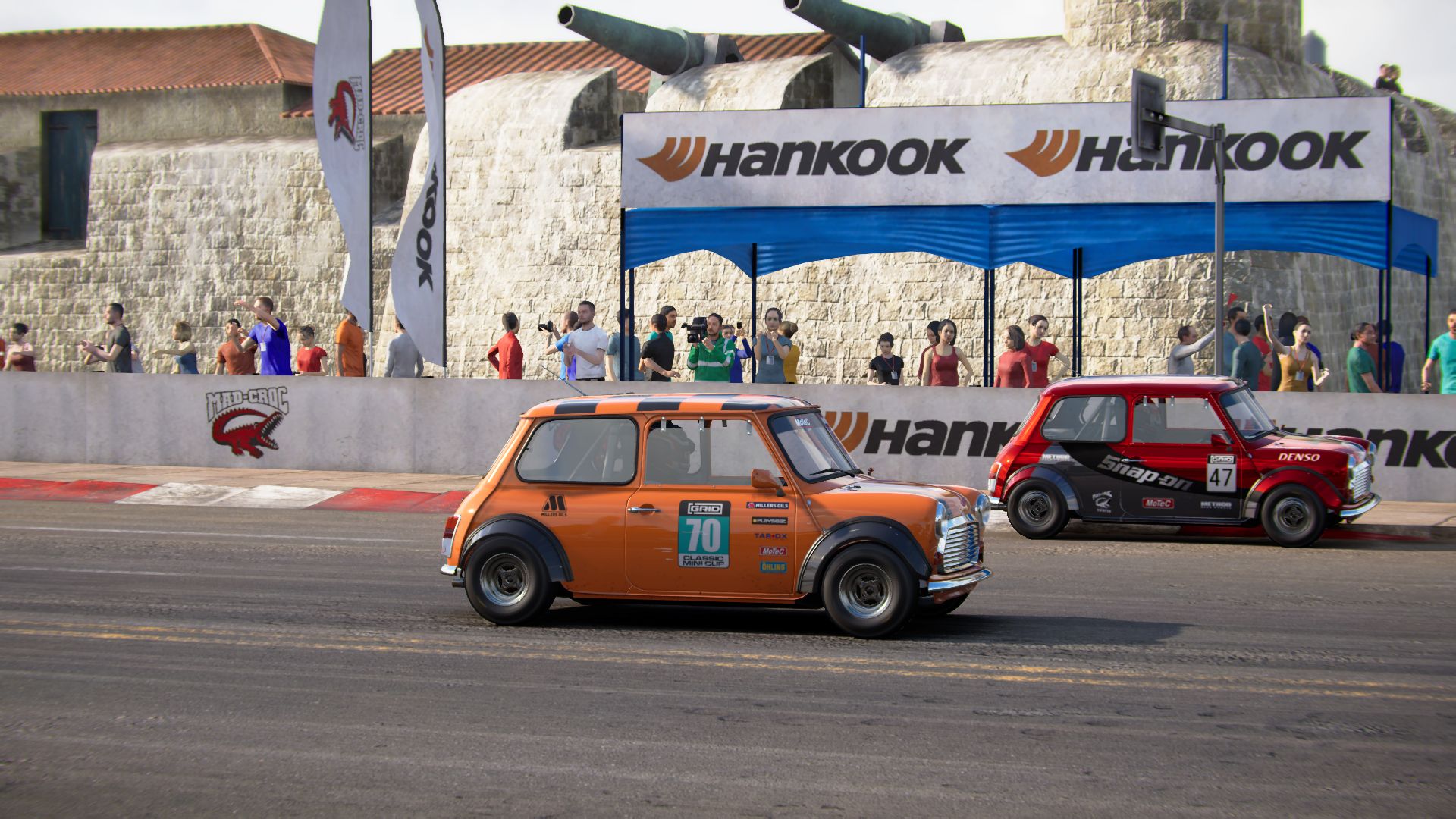 2019’s GRID is a return to the simple arcade nature of the original but not a return to form. The short races are a welcome relief when compared to the last title. AI drivers prove satisfyingly stubborn when defending their position and the nemesis system adds a bit of spice. Both of the new street tracks are sensational. But the problems are obvious. Too many of the tracks are copied from GRID Autosport with minimal changes. Damage modeling is several levels below where it should be. Multiplayer has several technical issues. Even the personality has all but gone from the franchise with no real team management and a simple career mode. It is unclear what sort of racer it wants to be, and in the process of trying to find itself, GRID has gotten turned around.

Our ratings for GRID (2019) on PC out of 100 (Ratings FAQ)
Presentation
70
Decent visuals thanks to nice car designs and detailed rain effects. The four new tracks look great, particularly the city locales. Shadows and trees have detail issues and the music is nonexistent.
Gameplay
75
Vehicle handling is good and the AI will rigorously hold their position to offer a different type of challenge. Moving through the pack from the back of the grid is fun and dynamic.
Single Player
50
Races are short and sweet, which is a great, but there is almost no personality or sense of career in the twenty-hour career. The team management is weak and the number of returning tracks is far too high.
Multiplayer
55
The online portion has been stripped down. No lobby browser and no community events. Various multiplayer-specific bugs make it hard to recommend.
Performance
(Show PC Specs)
CPU: Intel i5 3570k
GPU: XFX RX 480 GTR Black 8GB
RAM: 16GB DDR3
OS: Windows 10 Pro 64-bit

60
Runs okay most of the time but some track sections had lower framerates, possibly due to dense shadows, and they required lower settings.
Overall
62
GRID is an average racing reboot with no real personality. Despite the short races, strong AI, two new street tracks, and the shift towards arcade, it struggles because of so many recycled tracks, poor damage modeling, and disappointing multiplayer.