Causing havoc, one wing flap at a time

Geese are a common sight here in Canada. According to National Geographic, they (smartly) spend the colder seasons in southern coastal marshes, bays, wet grasslands, and fields. But for much of the year, you can find them all over North America, and they've become quite engraved into popular culture, as even our 1-dollar coin features a Canada goose. NG also says their diet is entirely vegetarian, consisting of grasses and grains, grazed from damp soils or even shallow water. But you wouldn't know it, as these pesky animals have a reputation for being fairly aggressive and annoying to humans, stealing their things for no reason and generally being troublemakers. Developers House House decided that humans should feel what it's like to annoy others as a large white bird, and the Untitled Goose Game was born. 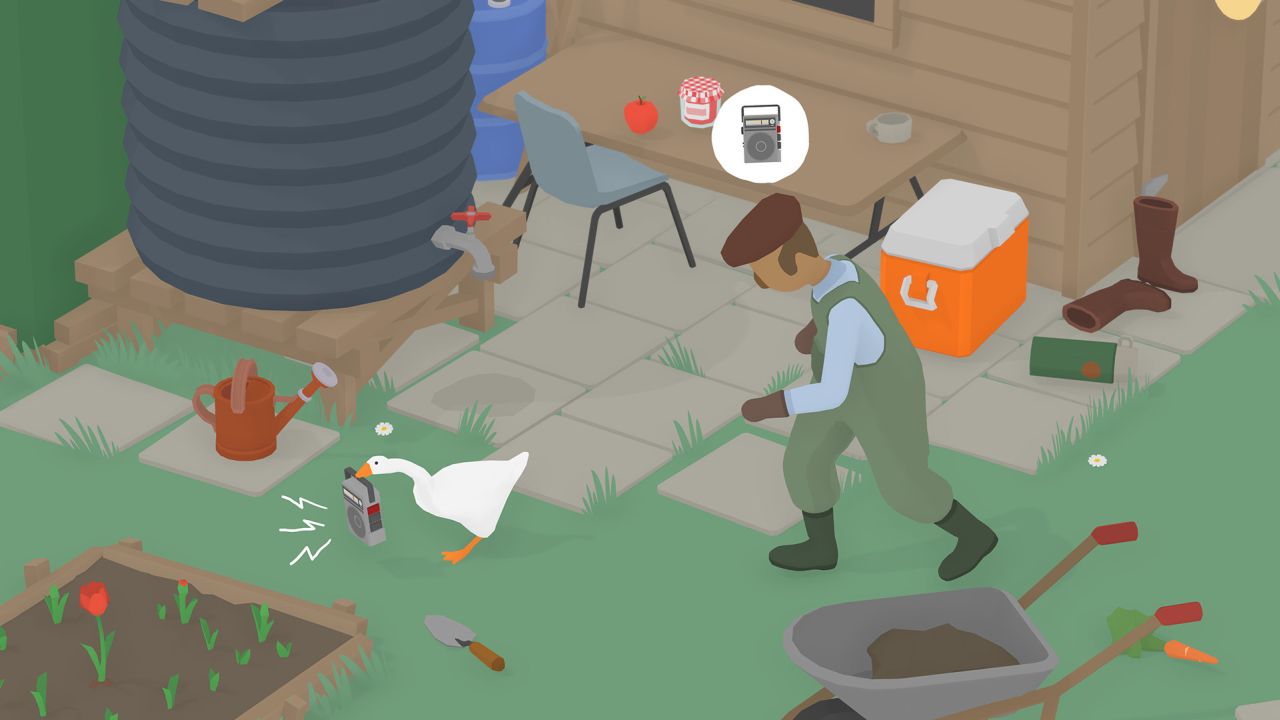 Untitled Goose Game is a puzzle title at its core, though of course simply finding the solution isn't the main draw of the experience. From an isometric perspective, you control a pesky white goose, and your interaction options include waddling around, honking, flapping your wings, and most crucially grabbing items with the beak. The controls are a bit imprecise, but they fit a casual game such as this. Perhaps the only notable thing is that you can also control your head height, and can grab things from the floor/or above you. This interaction modifier remains somewhat awkward for the duration of the title.

The limited interactivity is enough to get you through the game's four locations/levels, which takes under two hours, depending on how much messing around you want to do with the humans. Each location, such as a park or city street, has a list of possible accomplishments, with most being optional. You can startle a little boy with your honk to get him stuck inside a phone booth, or steal the lunch off a gardener. Most of the suggested activities involve mischief and trying to avoid getting caught, which fits quite well with the persona of the real animal. The objectives also give you something to do above and beyond the main task of each level, which almost always involves stealing something and bringing it to another location. The further in the game you go, the more complex the levels get, with lots of humans wondering around, many paths to walk, and items to grab. 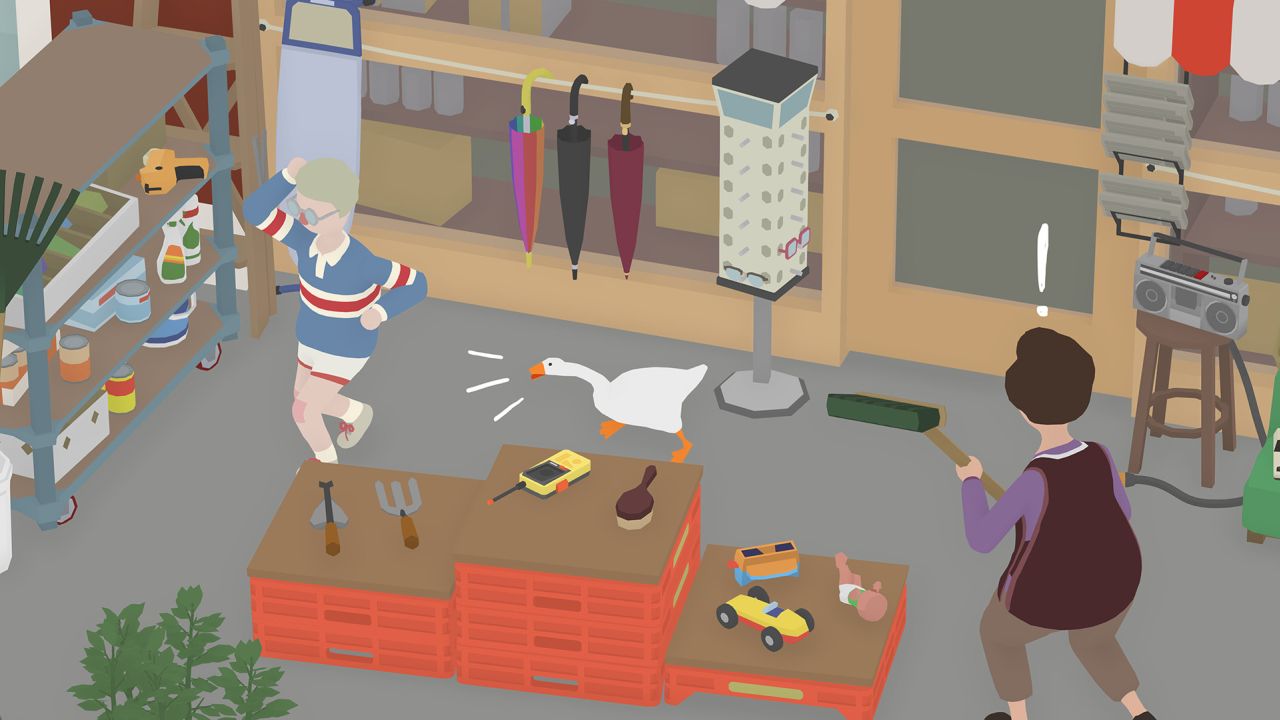 The main puzzle aspect of the game is to figure out how to get at the items you need. You can likely spot the item fairly easily, but getting it is another matter. Sometimes, it's just a matter of avoiding the humans. The AI will chase the poor goose if he is in a restricted area, or he has grabbed something in his beak. They are most often faster than you are, so it's mostly a matter of waiting for them to turn their back, and/or picking an optimal escape path. The AI is pretty basic and easy to abuse; some will give up chasing after a while, get stuck on objects, and they instantly lose interest in items if you interact with something else. At other times, to solve the puzzle you must also figure out the correct sequence of events, as some locations or paths are not accessible until you perform other actions or get the humans into the right position. It's often a case of trial and error, but it doesn’t become annoying as the game is relatively brief. And it's usually the optional objectives that are the most tricky to pull off, anyway.

The game relies on its titular character, small town setting, and visual style to provide a charming setting for funny hijacks, and it works most of the time. It doesn't really have a very high humor potential due to the simplistic interactions and basic AI, but it can provide a few chuckles as you mess with things and humans. Its short running time also ensures the shtick doesn't overstay its welcome for too long. The warm and somewhat abstract graphical style fits the game well, as does the simple audio design, with some nice piano melodies that break out when the humans give chase. 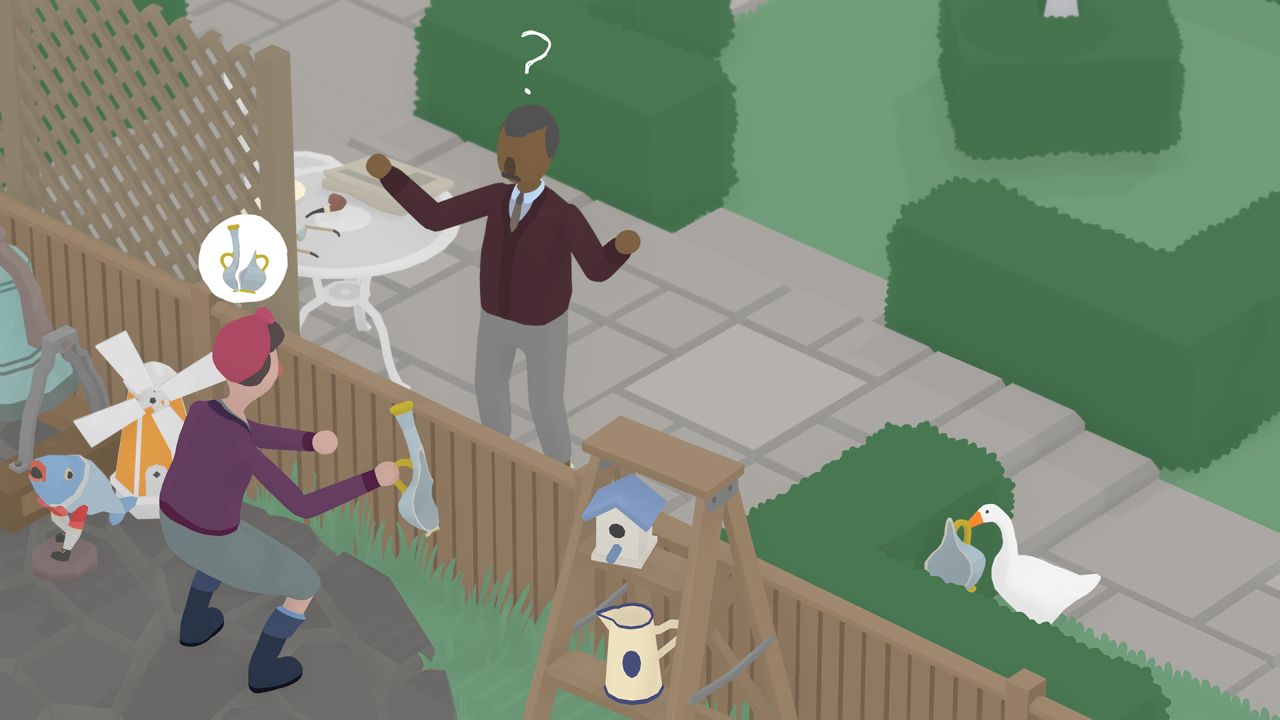 Untitled Goose Game is another in a line of straightforward puzzle games that tries to rely on its charm and whacky antics to both entertain and engage players. If you enjoy games likes of Donut County or Katamari, this is right down that same alley. Simple controls, small but interactive sandbox levels, and many opportunities to create your own funny interactions with the humans. The game's short length may cause some to think twice about the asking price, but if you're in the mood to becoming an annoying goose and making your own fun, Untitled Goose Game is honking your name.

Our ratings for Untitled Goose Game on PC out of 100 (Ratings FAQ)
Presentation
70
The charming art style matches the game's whimsical nature.
Gameplay
70
A decent enough puzzle/adventure, where the amount of fun you have sort of depends on how much you want to abuse the simple human AI.
Single Player
65
The game is fairly brief, which is positive as it doesn't outlive its welcome, but also a negative as the price is a bit high for what you get.
Multiplayer
NR
None
Performance
(Show PC Specs)
CPU: Intel Core i5-4670K @ 3.80 GHz
GPU: ASUS Radeon RX 580 8GB
RAM: 16GB DDR3
OS: Windows 7 Professional 64-bit

90
No issues
Overall
70
If you're in the mood for a quirky puzzle game where you're responsible for creating the funny moments, Untitled Goose Game fits the bill. Before it steals and drags it into the lake. 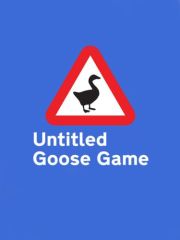