An enjoyable trip through space that's over a bit too soon

Sometimes the most exhilarating games can be the most simplistic - as is the case with PixelNAUTS' little venture through outer space, Lost Orbit: Terminal Velocity. The game distills things to an accessible mechanic of dodging obstacles and projectiles flung at you as you glide through a vertically scrolling plane. The steady action of maneuvering through corridors is reminiscent of a (slightly) more fleshed out Jetpack Joyride. Meanwhile, the emphasis on speed runs - thanks to propelling boosts - feels a bit like Sonic in space. It all works nicely and there's a smooth flow to the experience that's both thrilling and almost hypnotically relaxing. It's a journey that's somewhat bare-bones, and one wrought with a few flaws and quirks. Overall, though, Lost Orbit proved an enjoyable ride through virtual space. 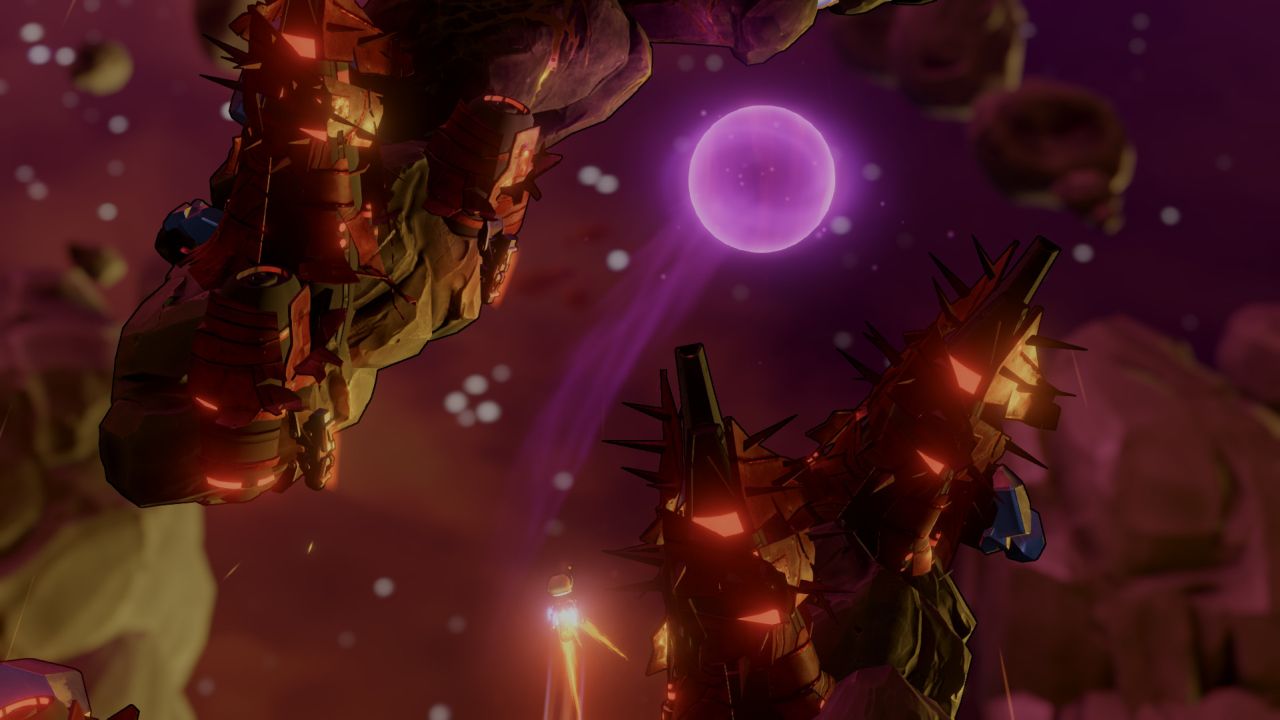 One wouldn't expect an enthralling narrative for a game whose premise revolves around a 3-5 hour campaign of flying through vast emptiness, yet it actually is engaging at times. You take the role of an astronaut named Harrison, who's been stranded in the deep reaches of space. You are rescued by a maintenance bot named Atley, who takes the role of the narrator, outlining what little exposition exists and chiming in with the occasional joke. Both the dialogue exchanges and voice acting prove charming; serving to break up the slower, empty moments of gameplay and enrich the experience. The plot gets surprisingly enduring, emotional, and borderline philosophical as you progress, touching on things like isolationism and comradery.

The gameplay itself chugs at a pretty slow pace with a dull first handful of stages, but like the narrative, the level of substance and intrigue picks up as you carry on. As each of the game's 5 biomes reside in the emptiness of space, there isn't a ton of detail or variance in the environments. But for the most part, the in-game elements - the hazards, interactive objects like boosts, and player upgrades, help keep things interesting. Lost Orbit's passive gameplay, coupled with your vulnerability of dying after touching just one hazard/wall, makes for an intense ride that's rarely too overwhelming.

You begin with a pretty weak palette of functions, but you can build your arsenal by earning “Obtainium” - the game's form of currency - which is scattered amongst each stage in the form of glowing purple bricks. This useful Obtainium can also be, erm... “obtained” in the form of a bonus depending on your performance. Following each level completion, you're also rewarded either platinum, gold, silver, or bronze medals. You're given ranks in 3 separate categories - speed, deaths, and the amount of currency gathered, which are compiled into a single score. The system's overall ranking seems a touch imbalanced - as earning, say, 2 golds and 1 silver will almost always net you a silver overall. Still, the emphasis on grinding out scores/ranks is a nice incentive to take on the bite-sized stages with multiple playthroughs. 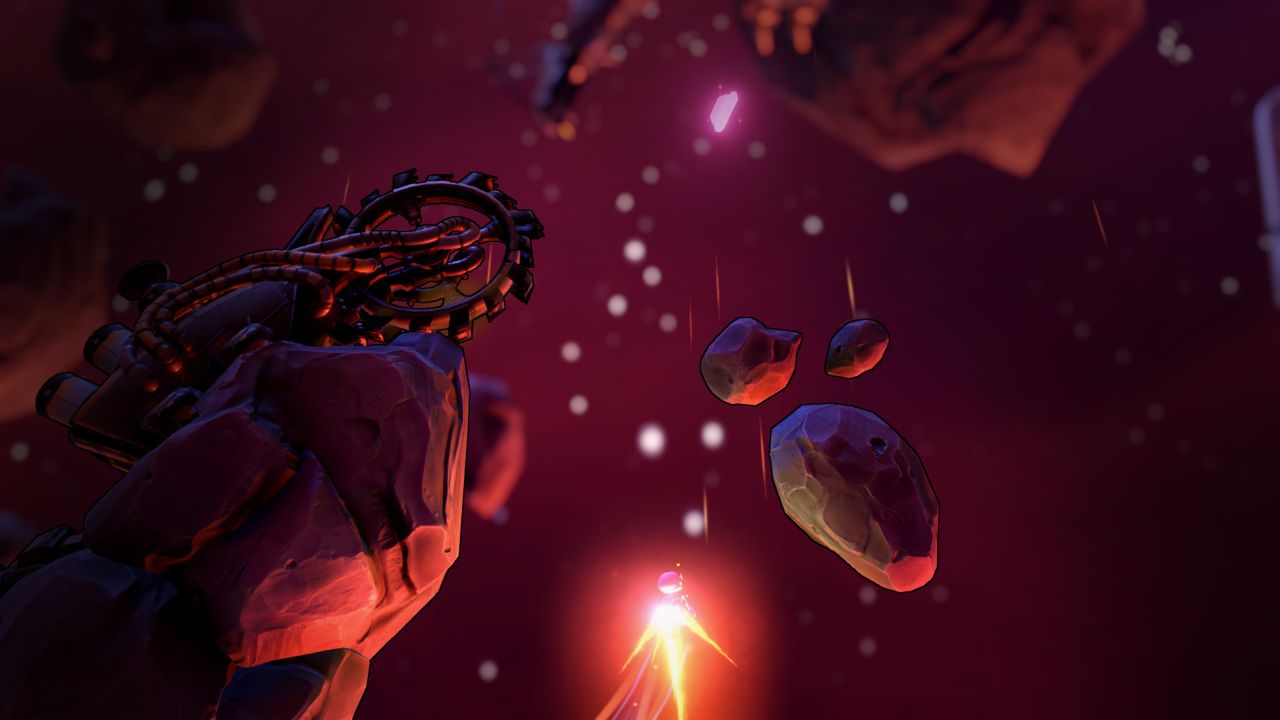 In addition to more intriguing level designs later in the game, various upgrades make the experience exponentially more exciting too. You'll be able to purchase more powerful boosters, barrel rolls for quick dodges, reverse thrusters, and magnets to reel in Obtainium from a distance. You can even unlock limited-use bombs, which prove handy by blowing up troublesome asteroids and laser-shooting turrets that get in your way. This heightened versatility makes for a more enjoyable and dynamic experience, as it opens things up to earn higher ranks and allow you to reach the finish swiftly and unscathed. The game wisely shifts you from one side of the screen to the other when drifting off-frame, even placing an arrow on the opposite side to guide your trajectory. While it may seem minor, this function makes for more seamless movement and easier escapes.

You're also met with more and more interactive objects that you can use to your advantage. These include cloud-like nebulas and orbs that propel you forwards, F-Zero-esque boosting ramps, and teleportation wormholes that shift you about like a ball in galactic pinball machine. The game also utilizes a cool - but occasionally frustrating - gimmick of gravitational pull with the ringed planets scattered about. These will yank you into their orbit and slingshot you forwards. This mechanic is pretty fun to mess with, but the delayed timing of releasing from orbit can be dicey, and can quickly turn you into a heap of splattered guts as you kareem straight into a wall.

As a whole, these elements, along with the abundance of trickier hazards like laser beams, bullets, and larger asteroids later on, set the stage for a consistently exciting experience that stays relatively fresh. The difficulty rides the line of challenge-induced excitement and accessibility overall - provided your computer can run Lost Orbit smoothly. There are moments where you'll feel blindsided by, say, a massive asteroid that pops into the side of the frame, or smashing into an ambiguous looking wall, but these unfair bouts are few and far between. 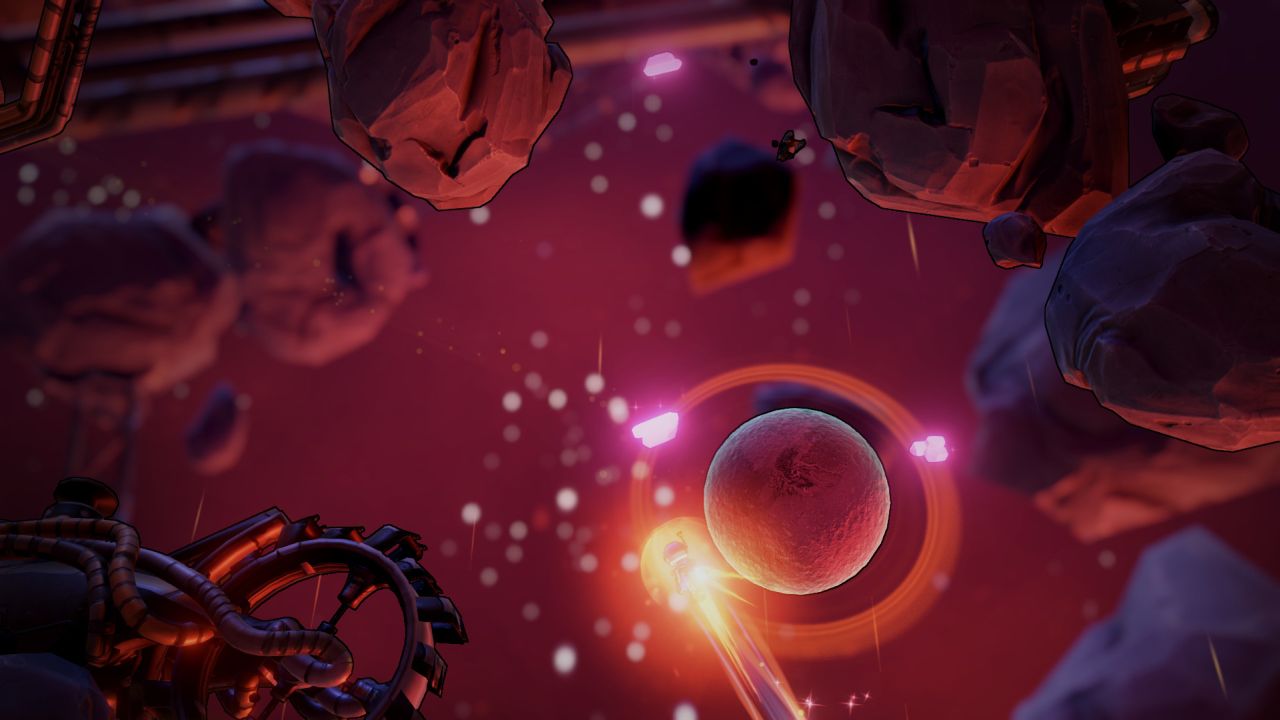 While the crux of the gameplay can feel a bit watered down and slim at times, there's a pretty ample amount of extra content. In addition to the ranking system, the main menu provides two additional options. These include a Challenge Mode, which throws more chaotic variants of each stage at you, and Time Trials for speed runs that are tethered to an online leaderboard. Additionally, the campaign's “Epilogue” makes for a particularly exciting experience. During this more grueling romp, you're tossed even crazier obstacles and environmental hazards like glowing green bombs to bonk into destructible barricades.

Lost Orbit: Terminal Velocity manages to be an exhilarating journey through the galaxy for most of its short duration. It's quite easy to get into, relying on a simple, but appealing formula that stresses evasion and speed. At the same time, there is some degree of subtle depth, with the extra features, upgrades, and variety of interactive objects that toy with propulsion-style physics. Those who fancy speedrun joyrides should find plenty to enjoy with Lost Orbit.

Our ratings for Lost Orbit: Terminal Velocity on PC out of 100 (Ratings FAQ)
Presentation
75
Graphically average outside some cool lighting effects; there's only so much you can do with the black backdrops of space and smatterings of asteroids. Some solid voiceover and a magnificent melodic trance/techno soundtrack, which complements the adrenaline-fueled action.
Gameplay
74
The game is laced with some easy-to-grasp mechanics (especially with a controller), though they can be a touch spotty at times, like when wrestling with the gravitational orbit of planets. But on the whole everything feels nice and allows for a captivating ride.
Single Player
77
The narrative is actually pretty memorable given what little there is to work with in terms of the gameplay and environments. The campaign takes off by the 2nd biome but is over all too soon. Thankfully, the time trials, challenges, and leaderboards help flesh things out.
Multiplayer
NR
None
Performance
68
A touch of lag and performance hiccups, which can be problematic for a game that demands precision and a smooth flow of gameplay. In fairness, my aging, mid-level desktop is likely a factor in this.
Overall
75
Lost Orbit: Terminal Velocity is a competent action-scroller that often reaches stellar status. It's a cool little indie with some neat ideas, and definitely worth taking for a spin at $10. 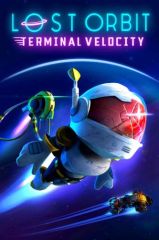