Being able to peek at both sides of the coin, to delve into other dimensions, or to see how the past and future can coexist are some of the most intriguing concepts in any entertainment medium. Perspective shifting is a unique and memorable mechanic when well executed in games, as it can serve both as a narrative vehicle and a fresh gameplay mechanic. Few games attempt it, and even fewer succeed. One new title to try its hand at the concept is The Great Perhaps, a 2D title that puts players on the surface of a post-apocalyptic Earth. 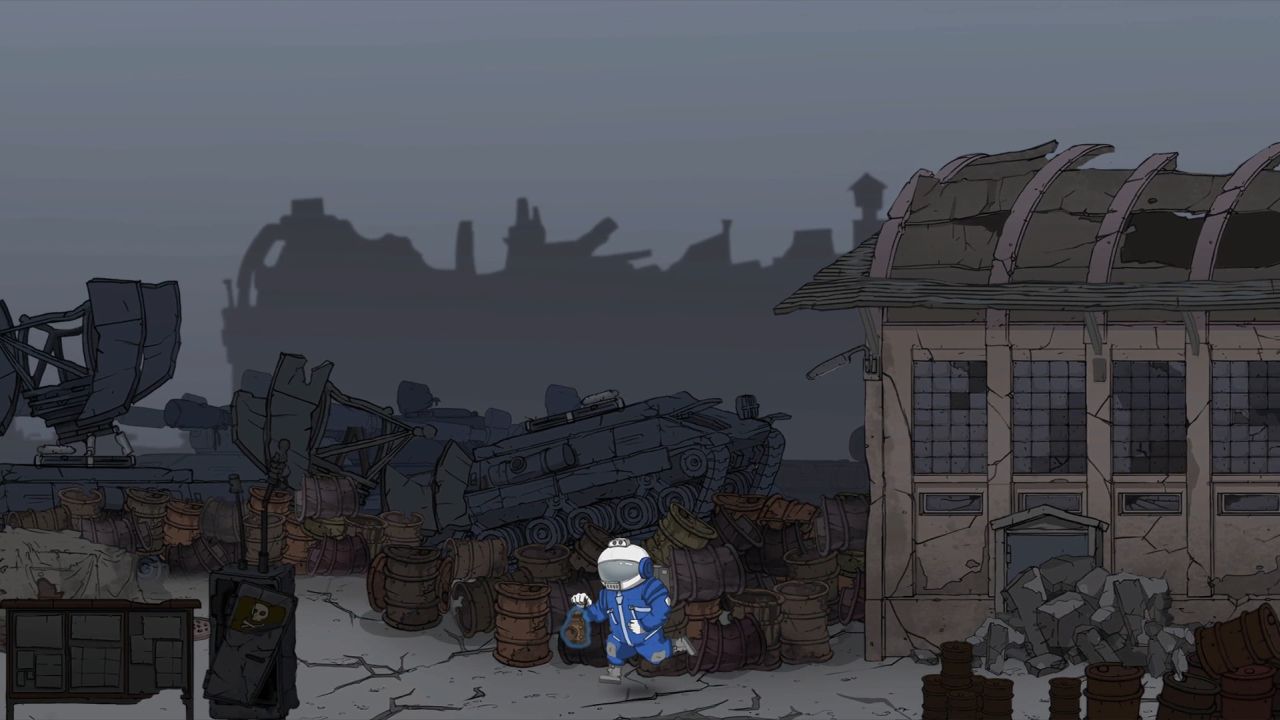 The narrative in The Great Perhaps is one of the strangest things about the game. On the one hand, it's intriguing, as you play an astronaut named Kosmos, who observes some sort of catastrophic event on Earth while he is on a mission in space. With all contact lost, he receives a message that the planet is being devastated by something unknown, and his orders are to enter cryosleep to see if he can outlast it. When he awakens 100 years later, there are no signals from Earth, and only the ship's basic AI named L9 is responding. He realizes that his family is probably long dead by now, even if they survived.

And herein the narrative gets really weird. He immediately asks L9 to drain the air from the ship to kill himself, but with a quick bit of humor the AI convinces him to instead go back to Earth and see what happened. This sort of insanely fast theme and mood shifting is found throughout the game, making the adventure feel extremely off-beat at times. It's interesting to explore the planet and try to find out what happened, but then there are sudden moments where the developers try to tackle depression, loneliness, and the literal meaning of life. These concepts are handled with such complete amateurism that they jolt you out of an otherwise touching story of a man trying to find remnants of his family and what happened on Earth. It doesn't help that the writing and voice acting are quite poor. That, and of course there is some sort of large black creature that's apparently stalking you.

Upon arriving on Earth, you quickly find a mysterious lantern that somehow allows you to travel through time. When activated, this lantern lets you shift between the present world and the past, before the incident, when life still existed and people went about their business. This simple mechanic ingeniously solves the loneliness problem of similar post-apocalyptic games. Being able to shift between two versions of the same location helps put them in better contrast, and emphasizes the solid feeling of atmosphere in both timelines. 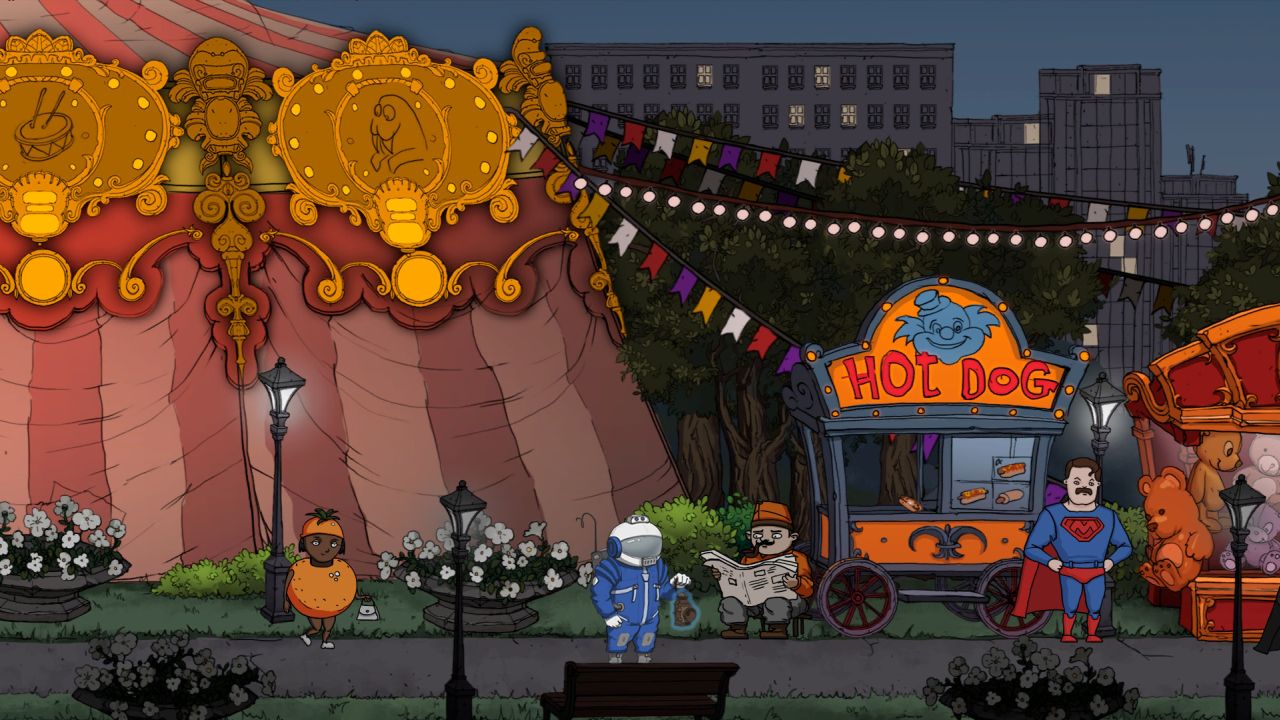 You explore the 2D game world by running around and occasionally interacting with things. You can jump, push/pull items, and throw, giving you a limited range of actions to overcome all obstacles. Most of the locations you visit are not really connected to each other - the metro, a hospital, apartment building, street festival, a bank, and so on. They don't have much to do with each other, but just serve as a means of offering a variety of settings and interactions. In each location you usually have to find a way through, and find a few items and bring them to the correct spot/person.

The lantern's ability to shift between two versions of the same level is not an entirely original concept (see Dishonored 2, Quantum Conundrum, etc), but it is well executed. You can switch between the past and present at any time, but your time in the past is limited, as indicated by an audio cue. The time shifting is used to solve a lot of the puzzles, as well as overcome navigation obstacles. You'll switch to the past to cross a deadly chasm or avoid hostile large rats in the present, or switch to the present in order to avoid police in the past. The lantern's light can be used to see what's around you in the other timeline, without switching to it. These timeline swapping challenges are straightforward, but are still enjoyable to execute.

The game does run into a few problems. For instance, while the puzzles are straightforward as there are very few interactive items and you're often explicitly told what to do, you can only carry one thing at a time. This means having to needlessly run back and forth to fetch something to give to the same character, from the same location. It doesn't totally kill the pacing, but it's annoying, though without this limitation the game would have been even shorter than its already brief 2 hour run time. 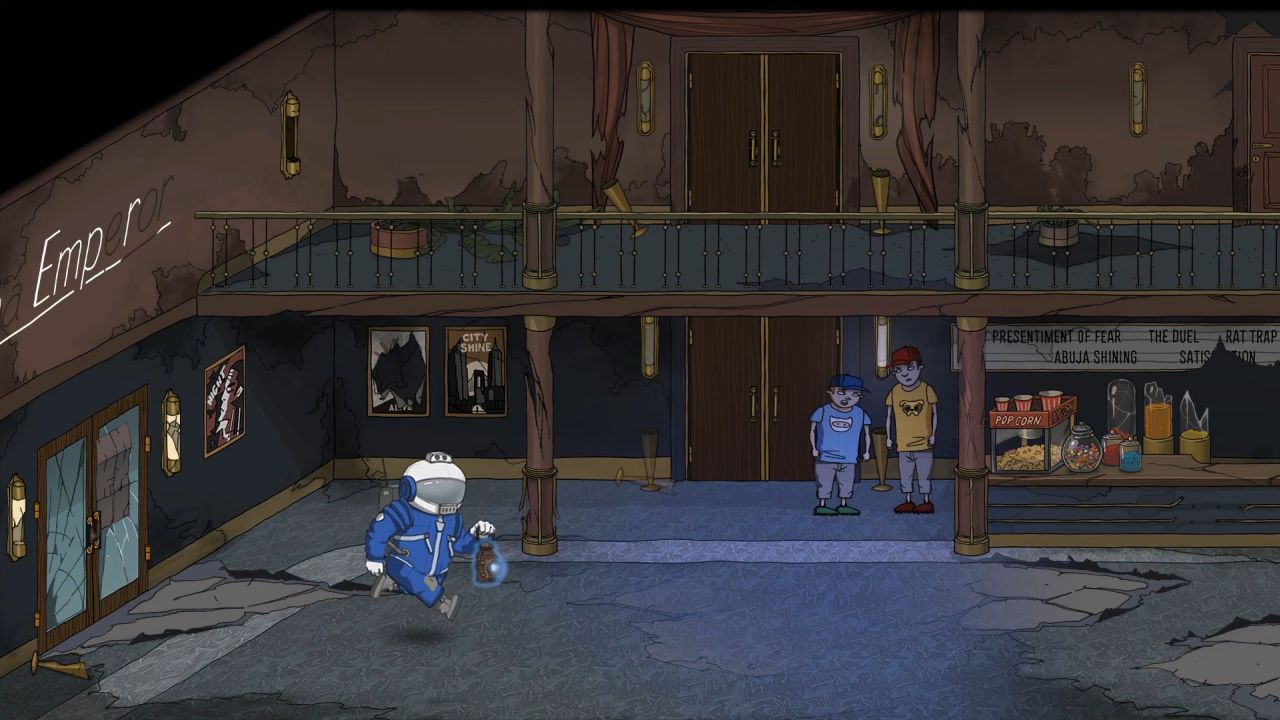 You die from getting touched by an enemy or by swapping back to the present while in a bad location (inside debris or in an acid pool), and checkpoints can be a bit far back, sometimes even making you get an item again with more back and forth running. And lastly, the controls themselves can be a little annoying - movement and jumping is stiff, and with no way to choose what item you want to pick up, you can get held up juggling two items that are too close to each other.

In both its puzzle gameplay and its presentation, The Great Perhaps feels very similar to titles like Valiant Hearts: The Great War. The art is memorable and helps set the mood of both timelines, with vivid colors and detailed environments; the animations serve their basic purpose. The music is also quite charming and fits the setting well. As mentioned though, the voice acting leaves a lot to be desired and can be very jarring.

The Great Perhaps is a satisfying 2D puzzle/exploration game, even though both its story and gameplay have a few blemishes. The narrative is intriguing, but is let down by jarring shifts in tone and mishandling of the serious subject matter. The puzzles and time-travel mechanic is well implemented, though you'll be doing a lot of running around with a single item in hand, and waiting for enemies to pass by. It's a good looking game with a very nice art style and music, though the voice acting is rather atrocious. For the most part though, it's a worthwhile journey with a novel setting and solid gameplay.

Our ratings for The Great Perhaps on PC out of 100 (Ratings FAQ)
Presentation
75
Nice art and detailed environments that are a good fit for the setting.
Gameplay
65
Straightforward puzzles don't require much thought, but take time to solve because you can only carry one thing at a time. Controls can be stiff.
Single Player
60
An interesting setting, but one that's dragged down with sudden mood shifts and poor tackling of heavy subjects.
Multiplayer
NR
None
Performance
(Show PC Specs)
CPU: Intel Core i5-4670K @ 3.80 GHz
GPU: ASUS Radeon RX 580 8GB
RAM: 16GB DDR3
OS: Windows 7 Professional 64-bit

90
No issues
Overall
67
The Great Perhaps is a nice looking adventure game that takes players on an interesting journey with solid dimension-shifting gameplay. Just be wary of the poorly handled mood swings and occasionally annoying design elements. 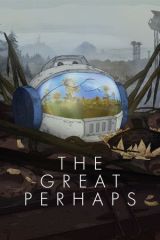