A straightforward puzzle game with a nature conservation message

There haven't been many higher-power games lately. Long gone are the days of Black & White, From Dust, and others. By letting players become a celestial being with control over the elements, the new game Quench from Axon Interactive already has a higher chance to stand out from the rest of the indie scene. However, although it has a nice art style and decent mechanics, its linearity and occasional lack of polish put it squarely back into the pile. 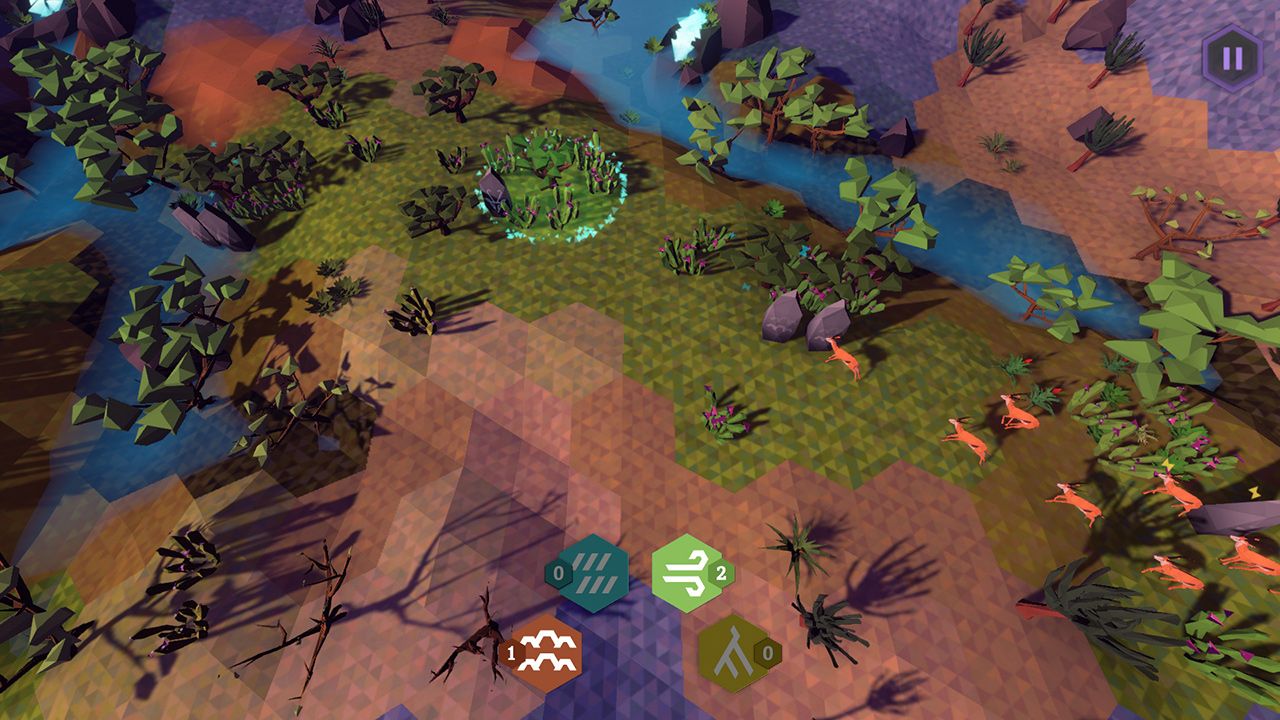 The narrative follows a herd of elephants, heading on their traditional pilgrimage from the Western Elder Tree to the Eastern one. This once in a generation adventure doesn't begin smoothly however, as the Tree seems troubled. It produces a white spirit bird, the Shepherd, and the leader of the elephants, known as Shaman, asks it for help. That Shepherd is you, the player, looking to safely guide these animals to their destination. You'll come across other animal tribes, such as wildebeest, zebras and antelopes, and asked to protect them as well. The story is fairly light on content, and is mostly looking to teach players about the struggles of wildlife through figurative examples. The occasional dialog screens are brief and static, but you get some sense of character from the leaders of each animal herd.

As the Shepherd, the game boils down to protecting the animals as they cross dangerous terrain. Through a series of levels, each a few minutes long, you'll need to observe the small maps from a bird's eye isometric view, and when ready, tell the herd to start walking. On a few levels, the herd will automatically proceed when you've cleared the path, but mostly they will move between safe spots when you tell them to. You can often choose from more than one path, depending on where you feel more confident in keeping them safe. You start off guiding just one herd, but later on you'll need to manage a few of them on the same map. The animals typically don't face much danger while standing around in their checkpoint though, so you can focus on one at a time.

The dangers that the animals face include both static and dynamic environment elements. For instance, you will come across sand dunes that slow and drain the energy (health) of the herd, or dangerous rivers that must be swam across quickly or at their narrowest point. Rocks and sharp shrubs will block the way. Dealing with these static and predicable threats requires little effort, as you simply need to keep an eye on the path ahead. But you'll also come across so-called Smokebeasts, infected versions of the animals that will attack on sight. These dark creatures will strike as antelopes, swarms of flies, and more. The herd doesn't stop between checkpoints, so you must dynamically keep these dangers at bay. 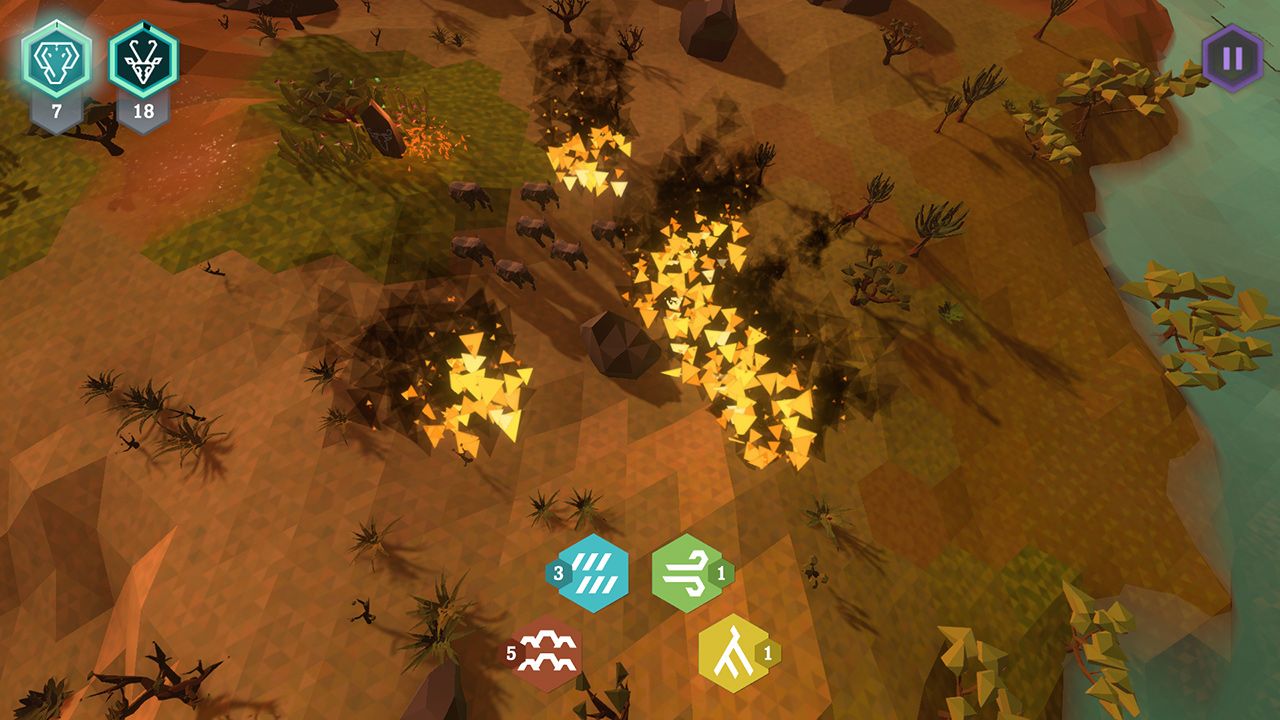 To deal with any and all dangers/puzzles that the levels throw at you, players have access to four weather powers. Using Wind, you clear the path of sand, hurry the walking speed of your herd, and push away Smokebeasts. With Lightning, you can zap shrubs to make them disappear, revive fallen members of the herd, and stun enemies. Rain comes in handy to heal the herds, restore groves/meadows or put out fires, and calm Smokebeasts temporarily. Lastly, using Quake clears rock formations that might be blocking the path or a fountain, and slows down foes.

Each level in Quench offers a very limited number of uses for each power, and so the puzzle aspect of the game is to figure out the correct sequence and application for each power during the level. You usually start off with just one or two uses of one power, and you need to first observe the map and interact with its elements to unlock more. Groves are placed throughout, with indicators that show what power uses they will give if you "activate" them, which usually means clearing the sand/rocks, or getting it some water. Once you've gathered all available powers on the map, you can choose to start moving the herd and protect them from any new threats that appear. Losing members of your herd isn't really a big deal though, as there is no scoring system and just one of them needs to make it.

As such, the puzzle aspects of the game are fairly strict and linear. The levels only have a few correct sequences, such as clearing the sand from a fountain, then using quake on it, in order to bring water to the valley and a Grove that gives you a few more power uses. The trick is to get enough power uses to clear all dangers, and if you misuse a power or don't see one in the corner of the map, you may simply fail and have to restart. It can often become more about trial and error than ingenious puzzling. With such linearity, and no bonus objectives, the replay value is nonexistent. 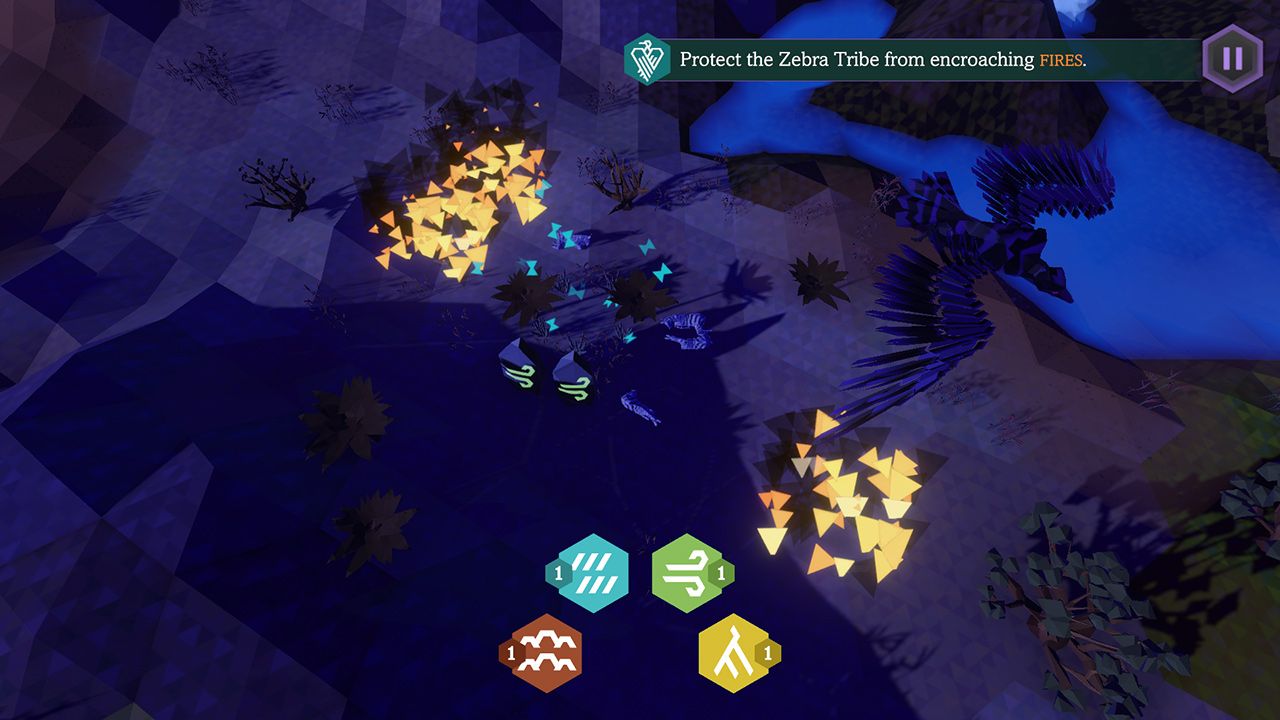 With the very straightforward gameplay, almost fit for a mobile title, the controls can be surprisingly awkward. The camera feels too low, even at its most zoomed-out setting. Scanning the map for interactive objects and Groves can be a chore, as they can be quite difficult to spot, and you must use the keyboard; using the mouse only lets you very slowly click and hold/drag, rather than just moving cursor to the sides of the screen. Using the E key to select a herd, and just pressing it again starts their movement, is an awkward control scheme. Using the mouse to choose the direction for the herd can also be needlessly tricky, with a thin white line that needs clicking. When restarting a level, the game shows a blank screen that's clearly meant to have tips on it, like it has during the initial level load.

Quench does have nice presentation. The art style feels like a cross between Tearaway, Kalimba, and perhaps Paper Mario, with the triangular approach to the design being unique. It's a pleasant game to look at with decent color variety and a high fidelity pixelated look. The map and animals themselves are 3D and are more of a budget quality, but the art style helps it along. The music is also quite fitting, with enjoyable tracks and effects. The game runs well, which is good because there are zero graphics options offered.

Quench offers a mostly relaxing puzzling experience, though one that fails to impress in its gameplay. As you watch your animal herds slowly crossing the dangerous lands, there's little sense of danger or difficulty. Each level has only a few correct solutions that give you enough power uses to overcome them, and even then, you can wing it and hope that just one member of the herd survives. Without any scoring or bonuses, there is no replay value, and all levels can be cleared within a couple of hours. At $20, Quench is expensive for what you normally get in a puzzle game, but you could do worse.

Our ratings for Quench on PC out of 100 (Ratings FAQ)
Presentation
70
The unique art style helps the game stand out, along with a nice, if somewhat limited, soundtrack.
Gameplay
60
Despite the simple interface and mechanics, controls can get awkward. Using your powers is straightforward and the ability to choose what path the animals take is a nice idea.
Single Player
50
A series of brief levels that you solve by finding the correct sequences of acquiring and using the weather powers. No replay value due to linearity, no extra challenges or scoring.
Multiplayer
NR
None
Performance
(Show PC Specs)
CPU: Intel Core i5-4670K @ 3.80 GHz
GPU: ASUS Radeon RX 580 8GB
RAM: 16GB DDR3
OS: Windows 7 Professional 64-bit

75
The game runs fine as it does not appear to be overly demanding, though there are no visual settings at all, not even resolution.
Overall
60
Quench is an okay puzzle game that has a few solid mechanics with a noteworthy art style, but its linearity and awkward controls don't help offset the somewhat steep asking price.

Our Review of Quench
60%
Adequate
The Verdict:
"A straightforward puzzle game with a nature conservation message"
Game Ranking
Quench is ranked #1407 out of 1624 total reviewed games. It is ranked #118 out of 144 games reviewed in 2019.
1406. Marvel's Avengers
PlayStation 4
1407. Quench

1408. The Dark Crystal: Age of Resistance Tactics
Xbox One