It's important to preserve history - to know where things began, and how far we've come. With the resurgence of video game remakes in recent years, not only have fans been able to take more than a few trips down memory lane, but entirely new generations have now been introduced to the timeless classics. Riding on the wave of nostalgia, we've had complete remakes, simple HD remasters, and basic ports like those on Xbox Backward Compatibility. The most recent game trying to return to the spotlight is Metal Wolf Chaos XD, a re-release of FromSoftware's 2004 action game Metal Wolf Chaos. 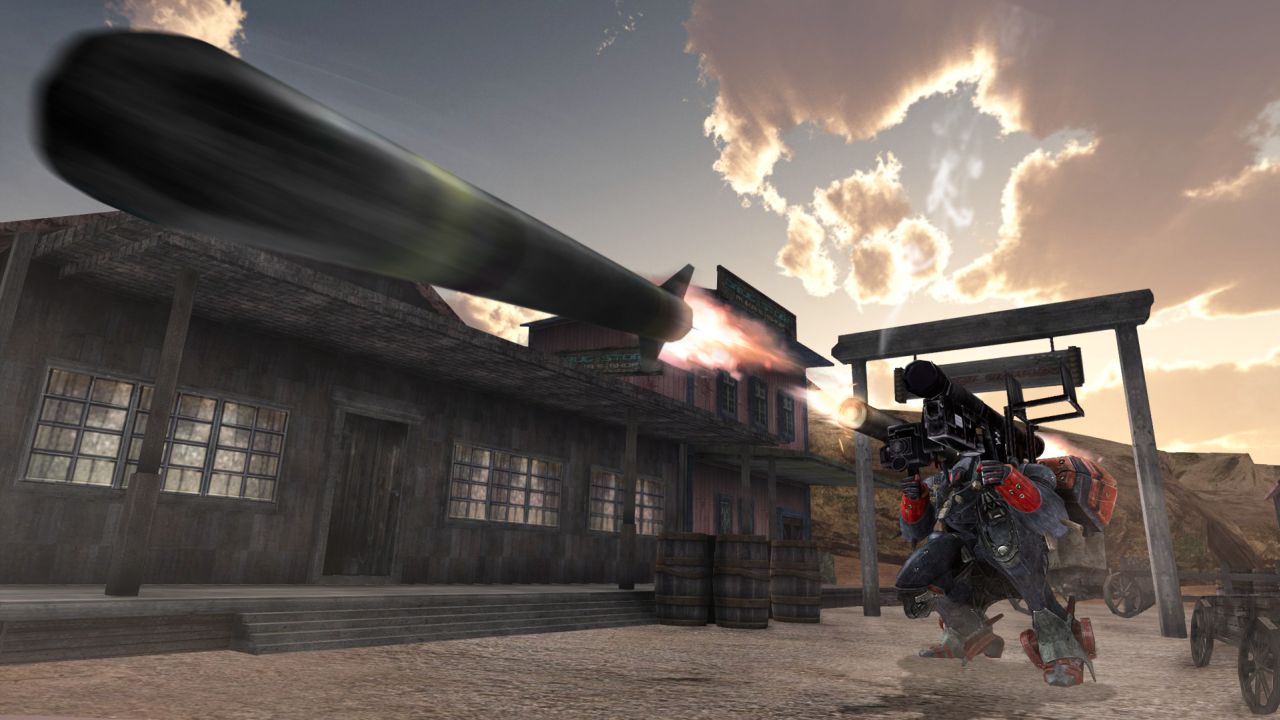 FromSoftware are currently best known for their Souls games, but the gameplay, story, and voice acting in Metal Wolf Chaos are so over the top, you'd be forgiven for thinking that it was a product of Platinum Games, or a part of the Saints Row franchise. Players assume the role of the United States President, Michael Wilson, sometime in the 21st century as freedom itself is under threat. But this is no political squabble - you're actually controlling a combat mech against the military forces trying to take over the White House. The rebels are led by traitorous Vice President Richard Hawk, piloting his own mech. Unfortunately, you lose the White House, and are forced to retreat to the west coast of the USA and begin the battle for American Freedom from there.

The fictional setting definitely tries to do what Saints Row has done many years later, but with less success. The narrative is so over the top it becomes completely silly, and by far the worst offender in all of it is the voice acting and dialogue. This is some of the worst voiceovers you'll ever hear, and despite what some very hardcore fans may try to tell you, it is not "so bad, it's good". It's just awful. Even for 2004, this is some atrocious writing and line delivery, and will take you out of the story completely. And unlike most silly action games like this, the game consists of many long cutscenes, filled with bad dialogue. Thankfully, it can be skipped.

The single player campaign is broken up into a series of standalone missions, as you pilot the President's mech across a variety of semi-open levels. This is a 2004 title, so you can't expect an open world or complex layouts. You'll fight on the lawn of the White House, on the streets of Phoenix, Houston, Chicago, on Liberty Island, and so forth. The levels can be linear or semi-open, letting you run around and destroy targets - stationary items like towers and bombs. There's no objective markers on the HUD, and the minimap is often unclear. Each level features either a few objectives to destroy, a race against time, or boss battles. The missions are fairly similar in structure and can grow repetitive. You can also take time to find some collectibles. 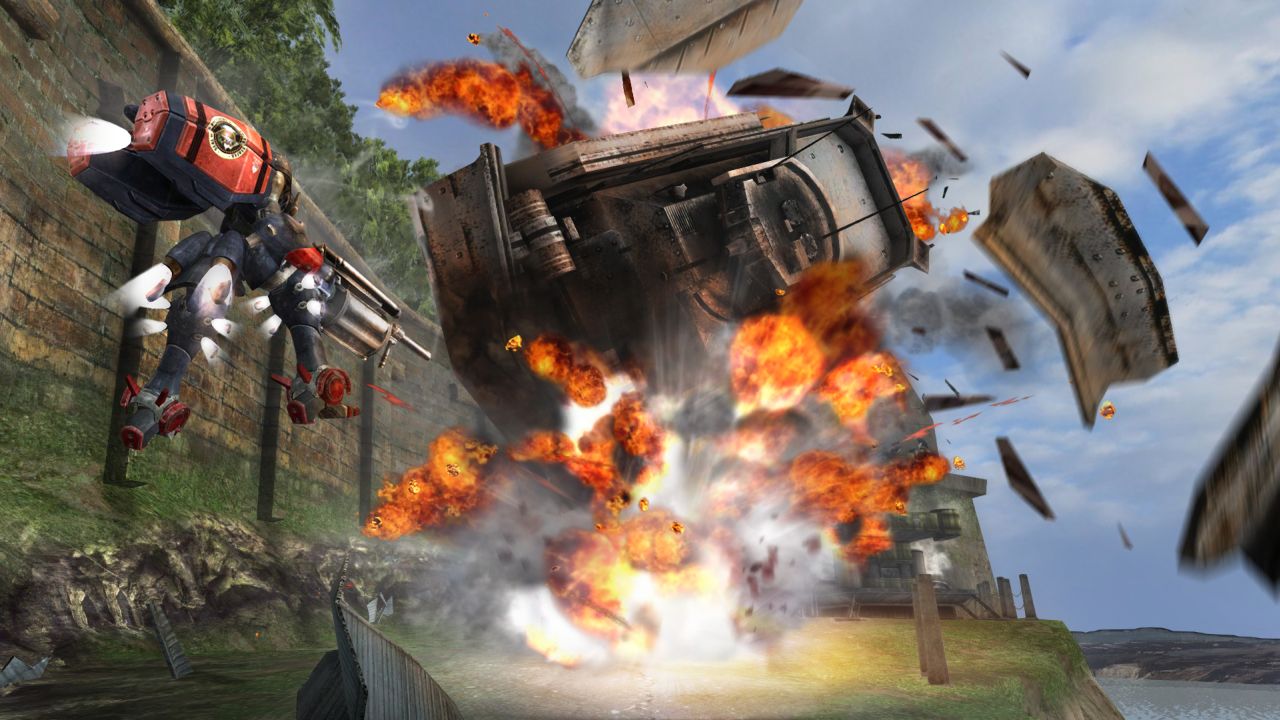 The gameplay follows the traditions of early 2000s action games. Your mech can move around freely, boost/jump, and stomp. The reticule is almost always huge, so the goal isn't so much precision as pure firepower. The controls are okay on PC with both keyboard/mouse and controller; movement and camera feel fine, though not the most responsive. It's fairly straightforward combat - avoid incoming fire, shoot everything you've got, and hope for the best. You need to keep an eye on your health, but much more important is the ammo reserves. If you run out during the mission, you pretty much have to restart. The world has a decent amount of destruction, especially for a 2004 game, as parts of structures crumble, debris flies everywhere, and taking out vehicles produces plenty of explosions.

Your mech has two weapon arms, each equipped with up to five weapons, and you're free to swap between them on the go. It makes for a cool system and effect, as you can see the weapons expand out, scroll through, and select the one you want. On PC, you shoot with both triggers/mouse buttons, one for each weapon arm. Despite the big fireworks, the action often feels bland and weightless, and some of the projectiles fly strangely slowly. You'll be facing off against the military troops, who spill out of trucks and barracks, and carry assault rifles, rocket launchers, and so on. They are mostly cannon fodder, and it's only when you start encountering tanks and other heavy machinery that you need to be cautious. And when it comes to bosses, who are often larger than life, there are multiple health bars to deal with, and often many stages. These encounters can be fun - assuming you have enough ammo left.

The weapons you bring to the battle is a crucial decision that's made before every mission. In the early days, you only have the basics available - a rocket launcher, assault rifle, pistol, shotgun, and snipers. The weapons all have different ammo capacity, damage, area of effect, single fire vs. automatic, and so on. They are also divided into light and heavy types, and standard and energy ammo. You can bring multiple of the same weapon with you, if you enjoy it and want to have a second ammo pool. But while the action is straightforward, the campaign progress is not - you actually need to buy new weapons and develop them, if you want to stand a chance in the later levels. Flamethrowers, multi-missile launchers, and so forth, will become critical to your success. 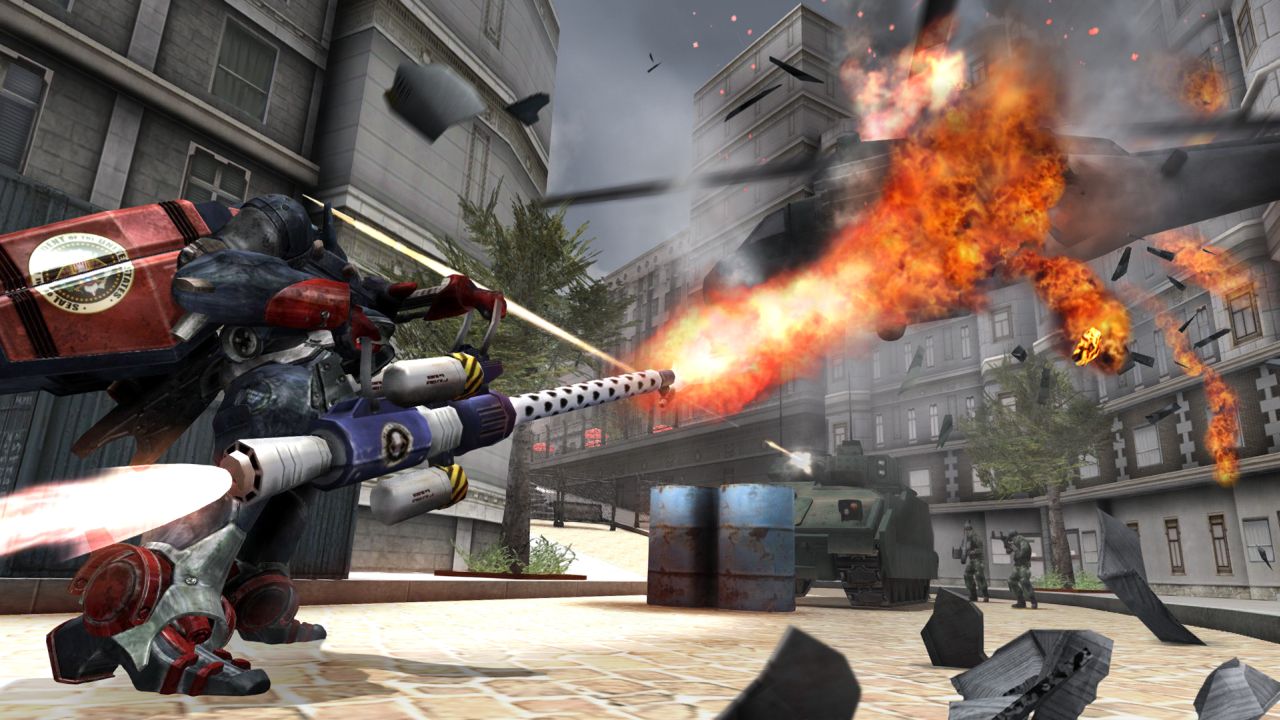 Each type of weapon has multiple tiers that you can invest resources into, by spending Rare Metals and money that are earned from doing well in missions. It doesn't happen often, but there's definitely a trial-and-error element to beating the later stages of the campaign, and whether or not you've got the firepower and the right loadout to keep up. Your damage output may simply be not good enough, forcing you to replay some earlier levels to get more resources and upgrade the weapons. There are definitely some difficulty spikes in the campaign, forcing you to go and do some grinding in earlier missions.

It's impossible to judge whether or not Metal Wolf Chaos was even a good game to begin with back in 2004, but in 2019 things look rather grim. As mentioned from the outset, re-releases such as this fall into a few different categories, but sadly, in the case of Metal Wolf Chaos XD, it's a basic port. Sure, the visuals have been touched up with a few better textures and 4K / 16:9 support, plus probably better controls and minor quality-of-life improvements like a new save system. But the rest has been largely untouched. On many occasions, the game simply crashed at startup. The various resolution options don't scale properly and leave UI elements off the sides of the screen. Character models, animations, effects, and geometry are all still original and very outdated.

Metal Wolf Chaos XD is a misfire. The game was only ever released on Xbox, exclusively in Japan, so it lacks any nostalgia factor - it's unlikely anyone reading this has ever played the original. As such, it's quite disappointing that instead of taking the time to remaster and introduce fans to a previously lost piece of the FromSoftware library, we get a game that has not aged well, and little effort was made to bring it up to modern standards. Perhaps the original was not that great to begin with, even for 2004, but that's impossible to tell at this point. As such, Metal Wolf Chaos XD is a basic PC port of an old game, and one that asks for an usurious $25. If it's some classic mech action you're after, just reinstall MechWarrior.

Our ratings for Metal Wolf Chaos XD on PC out of 100 (Ratings FAQ)
Presentation
50
It will run at a decent resolution, and some textures look OK, but for the most part it's a straight port that shows its age.
Gameplay
65
Some fun mayhem can be had, and the weapon swapping and upgrading systems still hold up.
Single Player
40
An over the top story with terrible voice acting, it tries to be zany but ends up being simply nonsensical.
Multiplayer
NR
None
Performance
(Show PC Specs)
CPU: Intel Core i5-4670K @ 3.80 GHz
GPU: ASUS Radeon RX 580 8GB
RAM: 16GB DDR3
OS: Windows 7 Professional 64-bit

60
A fairly barebones PC port without many options, and occasional crashes.
Overall
50
Metal Wolf Chaos XD has moments of entertaining mayhem, but they are hidden beneath layers of dated gameplay, nonsensical story, and gated behind a high asking price. Instead of being able to potentially discover a lost classic, mech fans get a rusted out blast from the past. 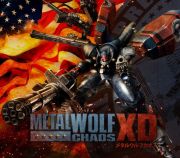