The Marvel license has come a tremendously long way in the time since Ultimate Alliance 2's release in 2009. A persistent and interconnected film franchise that would eventually build to an Avengers movie was just a twinkle in Disney's eye at that point in time. Fourteen movies, four Avengers crossover films, and many billions of dollars later; there's now a wide gamut of Marvel history and fan service available in the MCU's ongoing film franchise that realizes the lifelong dreams of many who sought to see superhero movies more closely mirror the interconnected and crossover-heavy nature of their comic book source material. A lot has changed in that time, but Ultimate Alliance 3 hasn't. It's largely made up of the same simplistic gameplay, oversaturation of characters, and throwaway narrative of its predecessors. While that might've cut it in 2009, Marvel has moved on and Ultimate Alliance 3 should've moved on too. 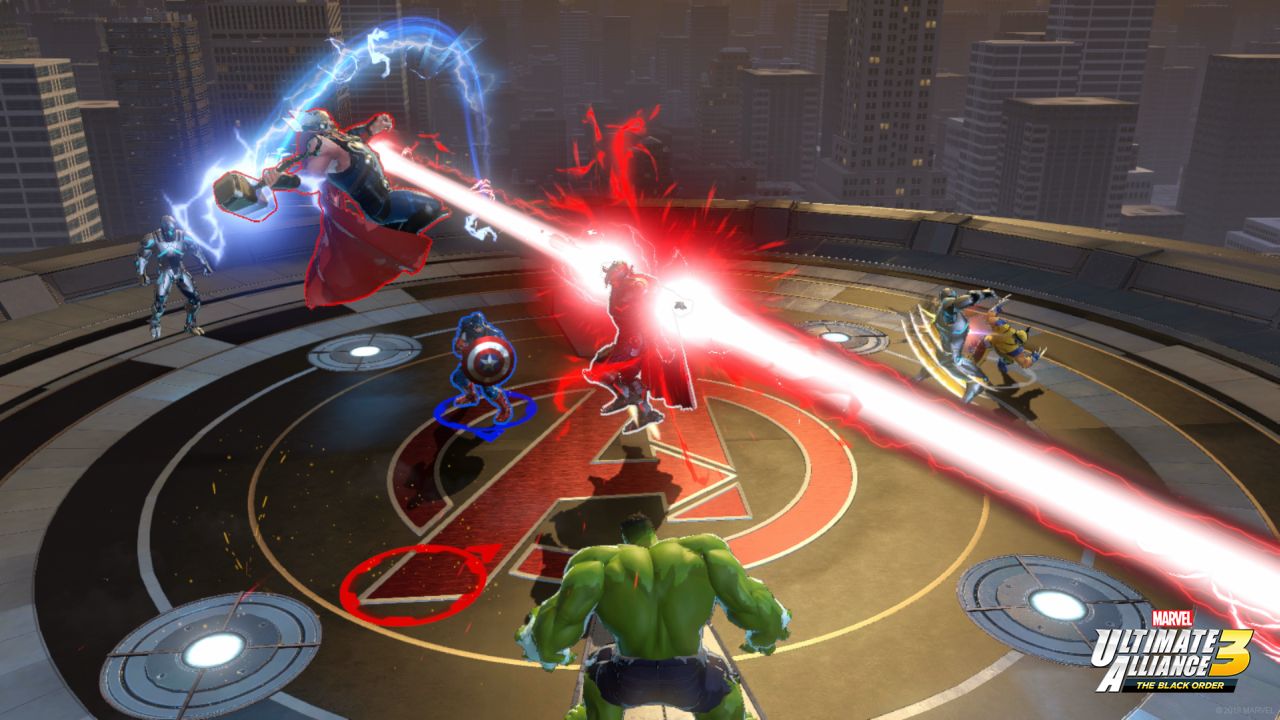 Ultimate Alliance 3's narrative serves to illustrate how impressive it is that the Avengers movies manage to maintain a compelling plot amid the dozens of iconic and beloved characters competing for attention. This game draws heavily from the Thanos-centric Avengers films: you command a growing group of Marvel heroes that seek to collect each of the six infinity stones before Thanos gets his gauntlet-clad paws on them. There's a solid foundation there, but it completely crumbles beneath the weight of all the characters they try and cram in. With over 30 playable characters and even more villains that come out of the woodwork to impede your progress, the story ends up devolving into a Marvel mad lib. You'll run into character X and help them take out villain Y in recognizable franchise locale Z. No characters or antagonists are given any time to breathe in the story's eight hour runtime.

Fan-favorite villains completely disappear after their boss fights just as quickly as they appeared, having waved an infinity stone in your face. Amusing interactions among the cast members are less satisfying than they are superficial as each character boils down to an arrogant archetype. We don't get to see what's important to any of these heroes or why they're even fighting in the first place. The X-Men are back to interact with their Marvel buddies, but they're barely given any attention or time in the spotlight. What could've been an opportunity to develop lesser-known or poorly-received Marvel characters instead comes off as a rushed and hackneyed attempt to capitalize on the success of recent movies.

The same simple button-mashing gameplay is back in The Black Order with a few small additions that help make it tolerable. The controls are simple and intuitive: a button for light attacks, another for heavy strikes, a dodge that doubles as a block when held down, and a shoulder button that lets you fire off an ability with the press of any face button. It doesn't take long to grasp and get into the foe-flinging action, but the synergy attacks stand out as they reward teamwork and careful team composition with higher damage output. Each ability has an associated synergy trait -- so if there's another character in your four-person party with an ability that has a compatible trait, then moving close to that character, holding down ZR, and pressing the applicable ability's face button will cause both of your ability attacks to fire off simultaneously for increased effectiveness. There are also extreme attacks which unleash a flurry of effect-heavy blows and can be chained across all four party members if their yellow extreme meters are also full. Taken together, these two synergistic systems provide moments of dazzling destruction and high damage output that help to keep the monotony of endlessly chained basic attacks at bay. 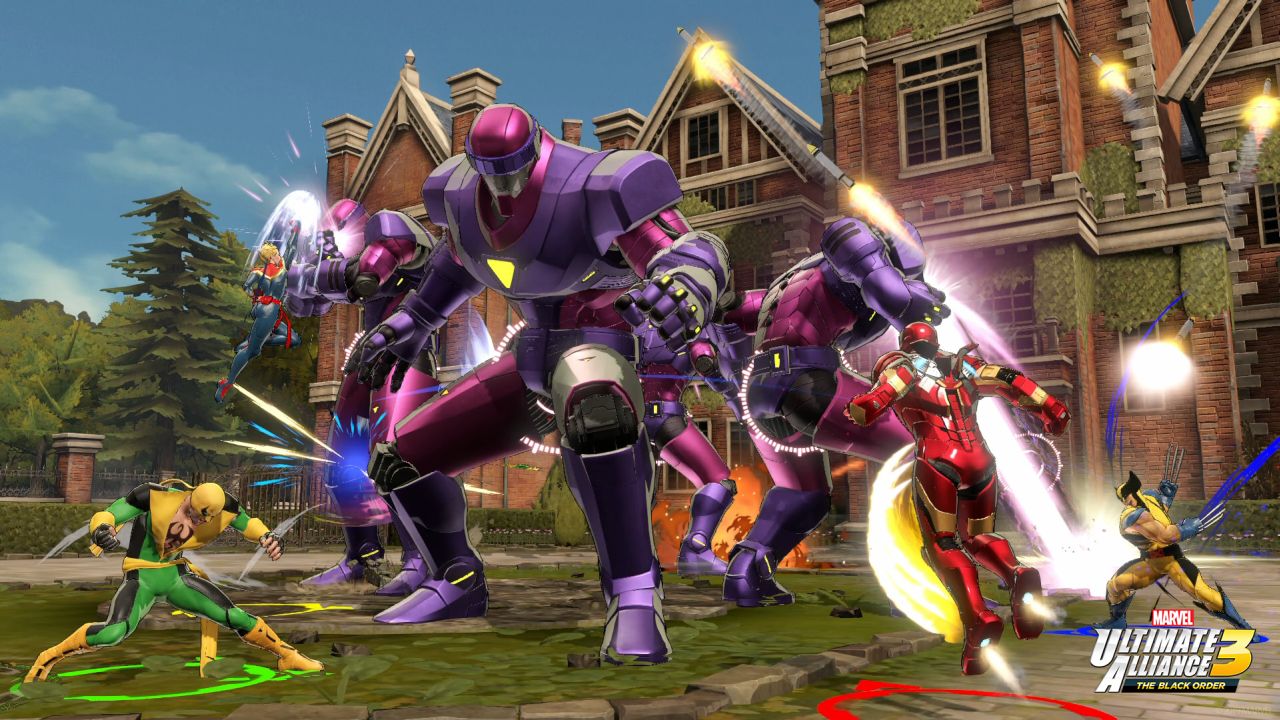 What the neat synergy systems aren't able to cover up, however, are the wonky pacing and repetitive structure of the levels. Each chapter plays out largely the same with a new big bad showing up to serve as an area's end cap boss fight with a couple of minibosses and platforming puzzles sprinkled in-between. While the structure of such a formula would seem self-evident, Ultimate Alliance 3 fails to stagger its encounters sufficiently. Sometimes you'll fight bosses two or three at a time which proves exhausting as you're met with one massive health bar after another to mindlessly chip away at. Encounters with the lesser enemies are broken up with puzzles that only serve to arbitrarily hinder your progress, and none of them require any thought at all: push a block from one end of the room to the other, trial and error your way through a maze, run away from an encroaching wall of death -- none of it is compelling to say the least. These sequences are also put one after the other without much time to decompress with the regular combat in between. The gameplay is at its best when you're allowed to blast through a cluster of enemies with the powerful heroes you're in command of, but those encounters are divvied up in a frustrating fashion.

On the other hand, there's no denying that The Black Order still makes for some good fun with friends. Its more mindless nature makes it a perfect way to do some catching up in between the occasional coordination of a synergy attack. The interface also makes it easy to do so thanks to a menu reachable from the pause screen that allows you to initiate local co-op on a moment's notice. Online play and local wireless are also available, and they're both great to have. While local wireless performance is much better than that of a four-player online room, everything remains largely stable and lag-free from the local player's perspective given a sufficient connection to and from the host. There are also an enormous number of trials that serve as bite-sized challenges made from carved-out campaign sections and can be played solo or in co-op, but they usually go much better with a human companion that doesn't let their abilities go unused the way the AI does. If you've got a friend you plan on playing Ultimate Alliance 3 with, it'll make for a far more enjoyable experience.

Playing cooperatively makes most of Ultimate Alliance 3 better, but it doesn't do anything for the overly convoluted, confusing, and nebulous progression that stands in stark contrast with the simple and straightforward gameplay. Gaining experience points from defeating enemies to level up your heroes is just the tip of the progression iceberg. As you dig deeper, increasingly complicated systems begin rearing their unwieldy heads. Each character's abilities can be upgraded by spending ability points (which are accrued just by levelling a character up), but you'll also need ability spheres that drop from hidden chests or become available as rewards in the trial challenges. There are also stat boosting ISO-8 crystals that can be equipped onto each hero or broken down to upgrade other more useful crystals. 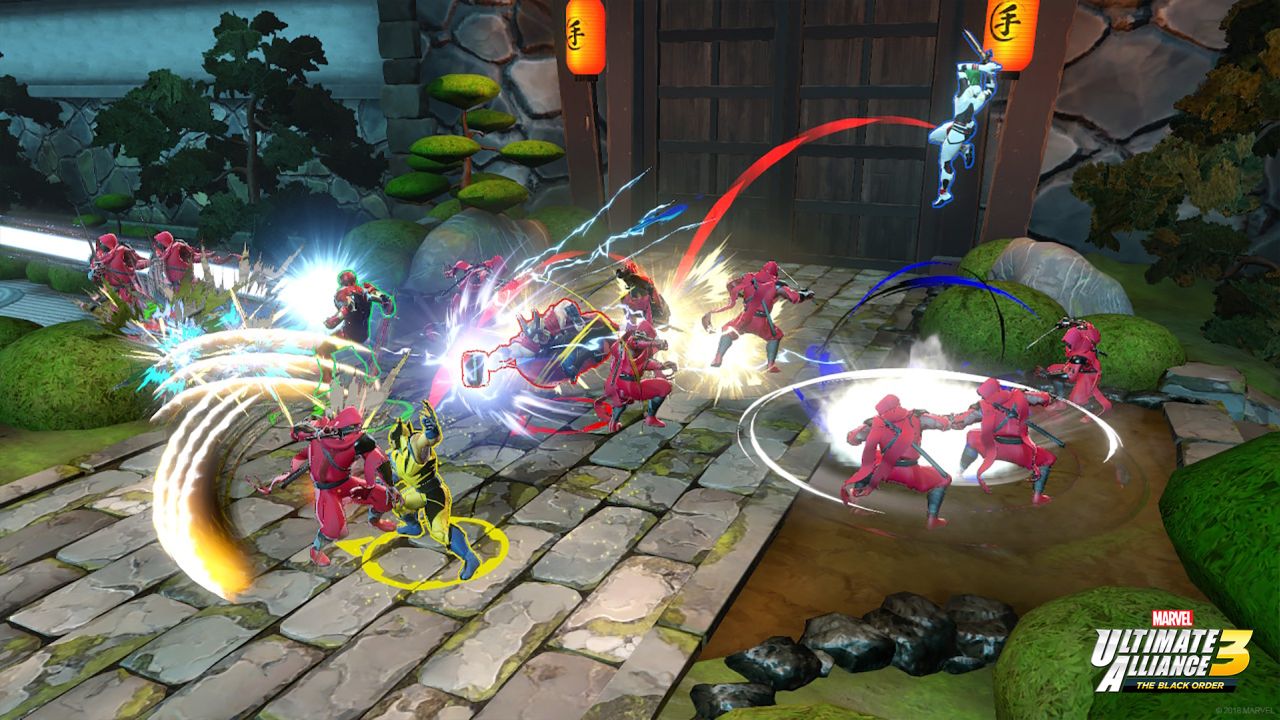 Then, to top it all off, there's an alliance enhancement grid full of nodes to unlock that give all your characters stat boosts if you have enough currency and enhancement points to pony up for the privilege. All of these systems have to be meticulously interacted with in clunky menus to persevere through the Ultimate difficulty and harder rift challenges, since carefully timed dodges and blocks can only get you so far. The progression systems do provide plenty of min-maxing depth, but they're far from satisfying to interface with and don't prove compelling enough on their own to make the gameplay's repetition feel meaningful.

Despite the fact that Ultimate Alliance 3 is a Nintendo Switch exclusive courtesy of being published by Nintendo itself, portable mode performance is often so bad that it's distracting. Playing docked also has its fair share of performance problems, but they're not as prevalent and the bump in resolution for TV's makes the game look surprisingly decent. When playing it handheld, however, it's a very different story. Dynamic resolution seems to be in effect, and it appears to be working overtime -- when the effects start flying, the screen becomes a colorful mess of chunky pixels. The scaled back resolution doesn't do much to aid portable performance either as it's still all over the map. While it's understandable that some densely populated areas and effects-heavy sequences might experience slowdown on the console's mobile chipset, even the plain hub areas exhibit noticeable performance deficiencies when playing portably.

The ratcheted back resolution wouldn't be such a big deal if the game didn't seamlessly transition to crisp cutscenes that appear to have been rendered in-engine and look miles better on the same 720p screen. Throw in long load times that spend a comically long time stuck at 90%, and it's almost baffling that a platform exclusive runs this bad in handheld mode at launch. We can feebly hope that a patch will fix things, but portable mode is plagued by so many endemic issues that it's hard to see them all being amended at some point in the future. 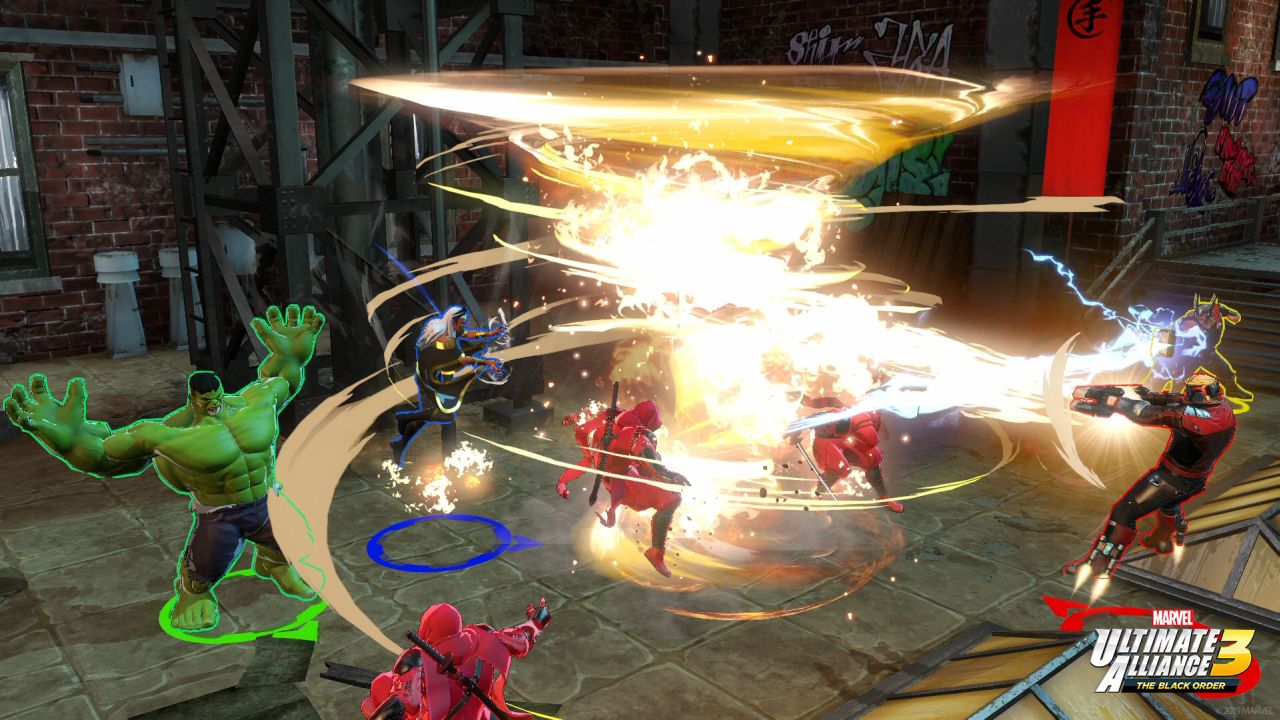 It's tempting to label Marvel Ultimate Alliance 3: The Black Order as a disappointment, but it's also surprisingly faithful to its two prior entries. They were also simplistic beat-em-ups with paint-by-numbers plots crammed full of as many characters as possible. But, ten years later, all the issues are far too difficult to keep overlooking. It's good for some mindless fun with friends and it's got some Marvel fan service, but we now live in a world where going out to see any one of Marvel's many yearly movie releases will provide enthusiasts with a far more entertaining and fulfilling fan experience than playing what's the equivalent of smashing a bunch of Marvel action figures together in a video game.

Our ratings for Marvel Ultimate Alliance 3: The Black Order on Switch out of 100 (Ratings FAQ)
Presentation
75
The graphics haven't progressed much in the decade since the previous Ultimate Alliance entry, but they get the job done. The soundtrack proves to be serviceable background noise, and most of the voice actors involved deliver respectable performances.
Gameplay
55
Team synergy mechanics help break up the button-mashing monotony, but the game's repetitive structure often fails to maintain the facade of fun. The nebulous progression systems don't do much to incentivize you to solder on either.
Single Player
50
The plot rings hollow and character interactions feel superficial at best. There's a good helping of content after the campaign has been completed including a harder unlockable difficulty and a ton of optional challenges to partake in, but it'll be hard to find the motivation to do so by yourself.
Multiplayer
80
Hopping in with a buddy online or detaching a Joy-Con for local co-op is easy, intuitive, and far more entertaining than going it alone. The simple team-focused gameplay is great for mindless fun that stays sufficiently enjoyable while you're catching up with a friend on the couch.
Performance
65
While the docked performance hitches are tolerable, playing portably is met with a noticeable downgrade in stability and visuals. The chugging action and chunky pixels make portable play feel far inferior as it fails to maintain a consistent frame rate.
Overall
61
The simple synergy-focused combat can be fun with some friends, but Ultimate Alliance 3's padded plot proves pernicious for its diverse cast of wretchedly one-note characters. Add to that a campaign that's poorly paced and painfully inconsistent performance, and you're left with a repetitive and unexpectedly plain package that doesn't adequately justify the revival of a franchise.

All videos for Marvel Ultimate Alliance 3: The Black Order (3)
Advertisement ▼