Enemy AI varies in quality but is generally fairly capable and proves satisfying when taking on a group. They are very vocal and will make their presence and thought process well known to Sam. You don’t need to watch them directly when they announce what they are doing or about to do. Once you are spotted the AI will remember your last known location, indicated to Sam as a ghost. Unfortunately a few times the guards closed in on this location and looked directly at the ghost as though they were waiting for Sam to materialize in front of them.
The final piece to the Conviction puzzle is the how multiplayer works in the Splinter Cell universe. Sam actually doesn’t make an appearance instead two agents from Russia and America are left to clean up the mess. Of the multiplayer the most interesting mode seems to be the co-op levels, each actually contains a little bit an opening presentation and links with the main campaign in some way. It sounds great but unfortunately the multiplayer component of Conviction is close enough to broken on the PC.
Hopefully the Ubisoft servers are online when you try the game because they were down more than a few times during my play through. Keep in mind you need both the UPLAY and MP servers operational to run the multiplayer component. Conviction is another Ubisoft title that requires constant internet connection, fortunately I was not let down by this requirement but many still lament it. When the servers are up I was waiting 20-30 minutes before a game was found. Once in the game you might not have to wait long before you are booted out back to the menu when connection is lost. Telltale signs might include excessive stuttering – in one case the game was stuttering during a cut scene. In multiplayer the mouse response time is much lower than single player. Although the mouse speed is not crucial when in stealth it makes the gameplay feel sluggish.
If you are lucky enough to play the multiplayer it can be relatively enjoyable, grouping together for a dual execute and moving throughout the level simultaneously is quite effective. Deniable Ops is a single player version of the co-op levels although you naturally don’t have to deal with the connection issues or mouse lag. Perhaps surprisingly the levels are actually more fun than the entire campaign. They are more open allowing you to progress in any direction and take down targets in any order you wish. It’s actually the sandbox type stealth gameplay that would have been better served instead of the very restricted campaign. 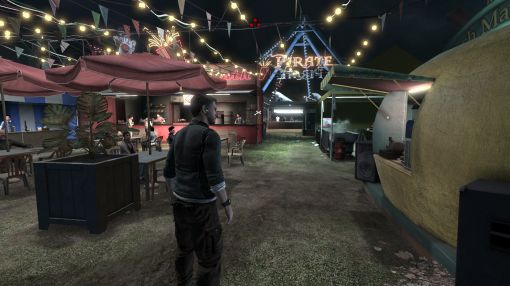 Sadly you don’t get to go on the fun rides

Conviction is almost an action game and even parts of the stealth could be categorized as fast paced during the campaign. There are some good ideas here but there are also some oversights to the gameplay and the series. Gamers who want to see Sam Fisher grab a hold of a bad guy and smash him through glass will be more than happy. If you were frustrated with the difficulty of other Splinter Cell games then Conviction provides little challenge. It’s really the type of game that will suit players who found the other Splinter Cell games a little slow.
Conviction is much easier on realistic than the original Splinter Cell was on normal. Not being able to move a body in a situation where a patrolling guard or camera will cause instant mission failure is one oversight I cannot forgive. The campaign isn’t particularly long, but it’s not much shorter than the other games. Stealth fans are warned this game is not like the impressive Chaos Theory. Many may be able to forgive Ubisoft for providing a more action orientated experience, I personally would much rather a better stealth game.
Prev123
Our ratings for Splinter Cell: Conviction on PC out of 100 (Ratings FAQ)
Presentation
80
A solid visual display, the choice for greyscale in stealth is somewhat unappealing and the interrogation sequences are one dimensional.
Gameplay
68
Drops the stealth and brings in high action with reliance on moving from cover to cover quickly. Removes several tactical gameplay elements from the series.
Single Player
70
The campaign level design is formulaic with cover boxes, cheap kills for Mark and Execute and linear level design with little thought process needed while transposing. Campaign is seven hours on realistic.
Multiplayer
60
Constant connection issues, annoying mouse lag and it takes far too long to find a game in co-op mode. No communication for PC gamers.
Performance
(Show PC Specs)
CPU: AMD Phenom II 955 @ 3.2GHz
GPU: Sapphire Radeon HD 5850 1GB
RAM: 4GB DDR3
OS: Windows 7 Ultimate 64-bit

72
Visually performs well enough for the framerate, some minor bugs and includes the always online requirement from the new Ubisoft games. Multiplayer servers are down often enough for it to be a problem.
Overall
70
A step backwards from the better Splinter Cell games. Less straightforward stealth and more direct action makes killing enemies less rewarding even with the interesting Mark and Execute feature. Stealth fans look elsewhere.