Perhaps it’s telling that Conviction, with so many comparisons to a third person shooter, actually contains a full action level. This action sequence is not only a poor third person shooting sequence but exaggerates the flaws in level design, pacing and even the AI system. On the PC you can easily zoom in on soldiers who are far away and take them down quickly, making this direct action sequence the easiest part of the entire game. One brief section even plays out in a similar fashion to a foot chase sequence in Call of Duty 4 but naturally it’s not as impressive even from a story perspective. 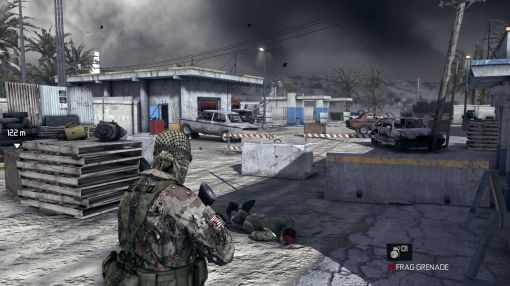 This full action sequence is more boring than it looks

It’s not fair to talk about the lapses in presentation or pacing and not directly link that back into the story telling or premise of the entire game. Unfortunately I found the story exceedingly dull and in many cases predictable. Opening scenes actually feature some pretty contrived dialogue, especially with Sam talking to his daughter. Sam is no longer part of Third Echelon and he is in a pretty bad mood since his daughter Sarah was killed in a car crash. Events catch up with Sam and he’s quickly back on the aggressive to try to find out more about this supposed accident. There are some in game cut scenes and also some interactive segments with Sam as he breaks various bad guys by slamming them into objects carefully placed around interrogations.
These interrogations seem to be nothing more than basic interactive cut scenes that see Sam continue to release more aggression as he slams the face of some poor villain into a piano or mirror. They certainly make Sam look like a real tough guy, but for me they also make him out to be a real jerk. A non-interactive interrogation would convey the same aggression and be far more seamless. Perhaps this added aggression helps Sam perform the impressive Mark and Execute manoeuvres. 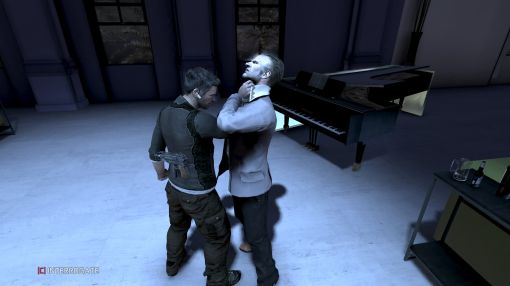 Oh look, a conveniently placed piano to smash your head against


Mark and Execute emphasizes the amount of direct action in the game by allowing Sam to quickly eliminate a group of up to four enemies. To unlock the ability to execute you must first perform a close quarter’s kill on a target. During the campaign there are some blatantly placed close quarters targets for easy recharge. They become less obvious or include bigger groups of enemies in positions that require more thought than in the opening levels. You can use a simple silenced headshot so you aren’t dealing with more enemies than your weapon will allow to Mark.
The Mark feature itself adds quite a bit to the planning phase, since it enables a very basic way to track foes through walls. The game will put a grey arrow above enemies which will turn red when you can execute that guard. Being able to Mark helps avoid situations where you walk out in front of a patrolling guard and also lets you time executions when you can’t directly see those you have marked. It’s nice to be able to track movements of enemies and work out where multiple patrols are going to cross paths.
Mark and Execute gets even more use during the later part of the game, and it requires some quick thinking to use it efficiently. The last few levels have guards that move aggressively toward your location and require quick movement behind shadows or in between strategically placed cover. It also requires careful positioning in order to maximize the takedown angles. You may need to whittle away larger groups before executing the remaining targets. Mark and Execute is actually one of the better ideas placed in Conviction although it seems to rely on it too heavily and makes stalking your AI prey seem less important.
Prev123Next