An engaging and compact puzzle game

If you've had a chance to drive through a large enough city, you have likely seen the use of a ramp meter (aka a ramp signal) when entering some highways. Those lights ensure that traffic on the roads is flowing, while avoiding congestion and minimally delaying those wanting to merge. You've also probably seen those poor police officers directing traffic when an intersection light is broken. Those are important and stressful tasks, and the new puzzle game Traffix does a good job of simulating such scenarios. 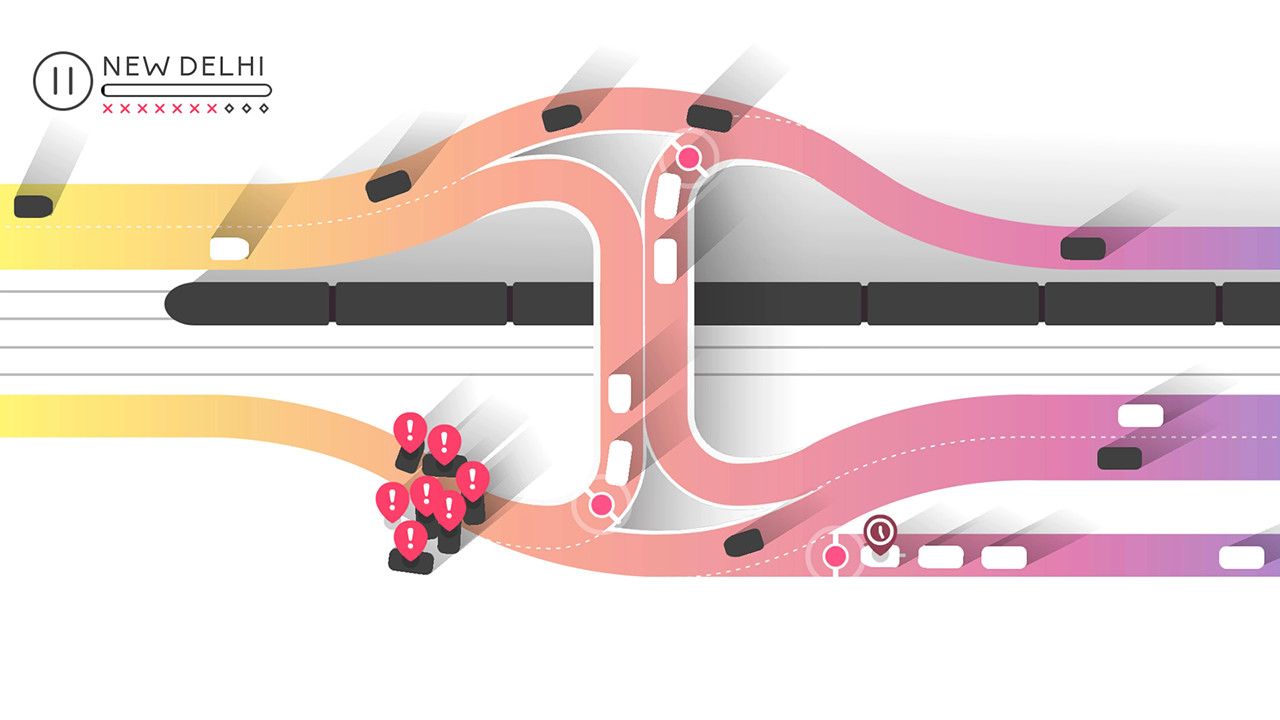 Traffix is a minimalistic puzzle game that, like many others in its genre, looks to put you under the stressful scenario of managing congestion. In this case, it's the roads, intersections, highways, and traffic circles of various world cities. The levels are each named after a city, but really there's not much here to distinguish the locations. Each level simply presents players with an intersection or a merge lane of various types and designs, taken from the real world, and asks you to control a few of its entrances. You'll find black cars going about their business in random frequency, and your job is to operate signals to allow white cars to safely merge/cross/enter the flow.

The signals you operate have three functions: click once to allow one car through, click twice to allow all cars currently in queue to pass, and click again to put the light to green and allow free flow. The latter option is rarely used, but in certain scenarios it makes sense, such as when you're wanting to allow all cross traffic on a road, and just want to worry about the other signals, which are controlling the merging cars. As such, the controls are simple and friendly, thanks to the game's mobile origins.

Things start off simple, with just one or two lights, and a clear view of the road. It comes down to timing and ensuring that you're not causing accidents. As you let the white cars safely merge to highways or perform left hand turns, you're always engaged and making sure your timing is right. All cars travel at the same speed, even though there are various types of vehicles on the road, which is helpful but also somewhat limits the game's difficulty ceiling. Each of the many levels present increasingly challenging conditions, keeping you guessing and switching up the way of thinking. 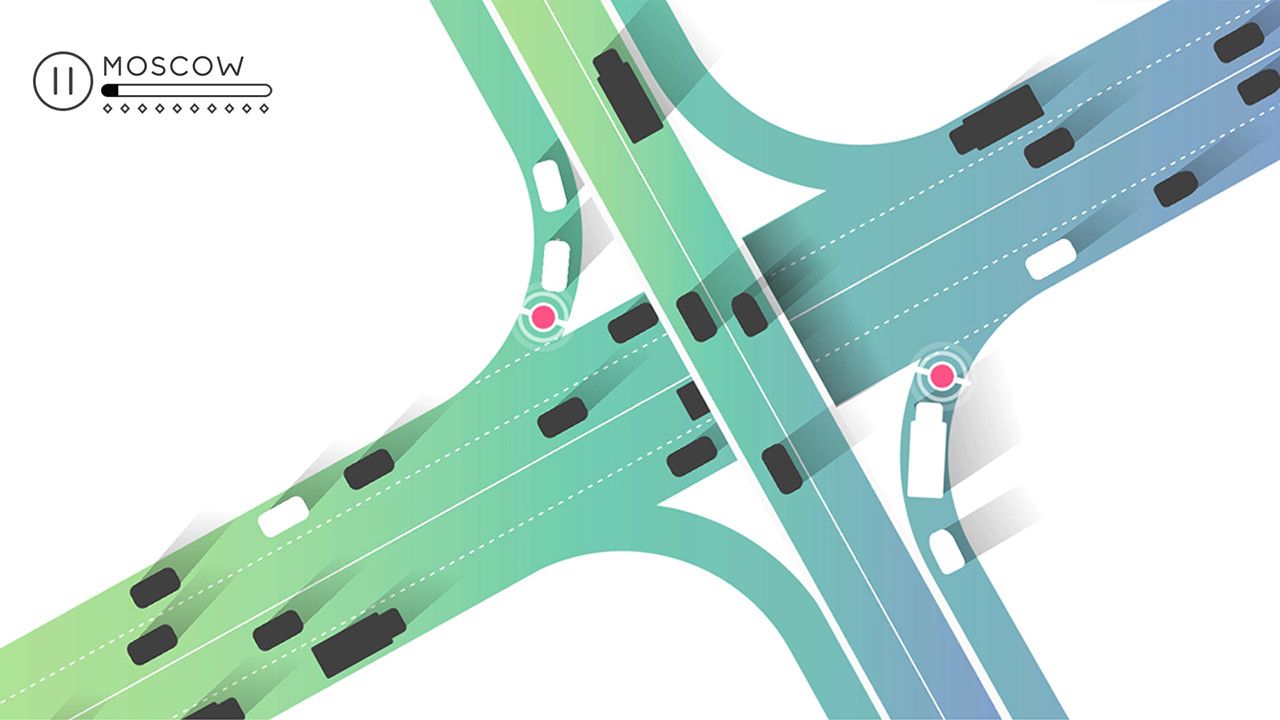 The initial levels are simple enough, but soon you're tasked with juggling multiple signals at the same time, while avoiding occasional trains, airplanes, and your own white cars. Some levels don't even offer black AI cars, and just task you with managing your own traffic - and even that gets surprisingly tricky as you mess up on the timing. At other times, the game cleverly puts an additional overpass or two on the screen. The cars in that overpass don't actually matter, but they do a great job of distracting and messing up your timing, as well as obscuring your view of the oncoming lanes onto which you're trying to merge the white cars. Despite a simple premise, Traffix offers some devilishly clever levels.

Of course, it's not just a matter of timing. In typical fashion, each level offers up to three stars - one for completing it, one for having no accidents, and one for having no angry drivers. That last bit is what keeps the pressure on; you can't just have the cars sit and wait at the red lights forever. Drivers will become angry if you delay them too long, so you must continuously juggle the multiple signals you're operating in order to keep the traffic flowing. You will have accidents, but that is OK, as you're allowed a few per level without failing. To avoid pileups, you have to click on the crashed cars to clear them. Herein lies one of the game's few control faults - very often the game will detect the click as being both to clear the crash and to operate the nearby signal, potentially leading to more problems.

Once you've made your way through all the levels, which should take under two hours, you can get a little bit more out of the game by trying Chaos Mode. This mode is unlocked for each level that you've got a three star rating on, and it replaces your normal white vehicles with emergency ones. This means they can't wait as long at your stops, and a single accident ends the level. Given the price of the game, the amount of levels in Normal and Chaos modes offer fair value. 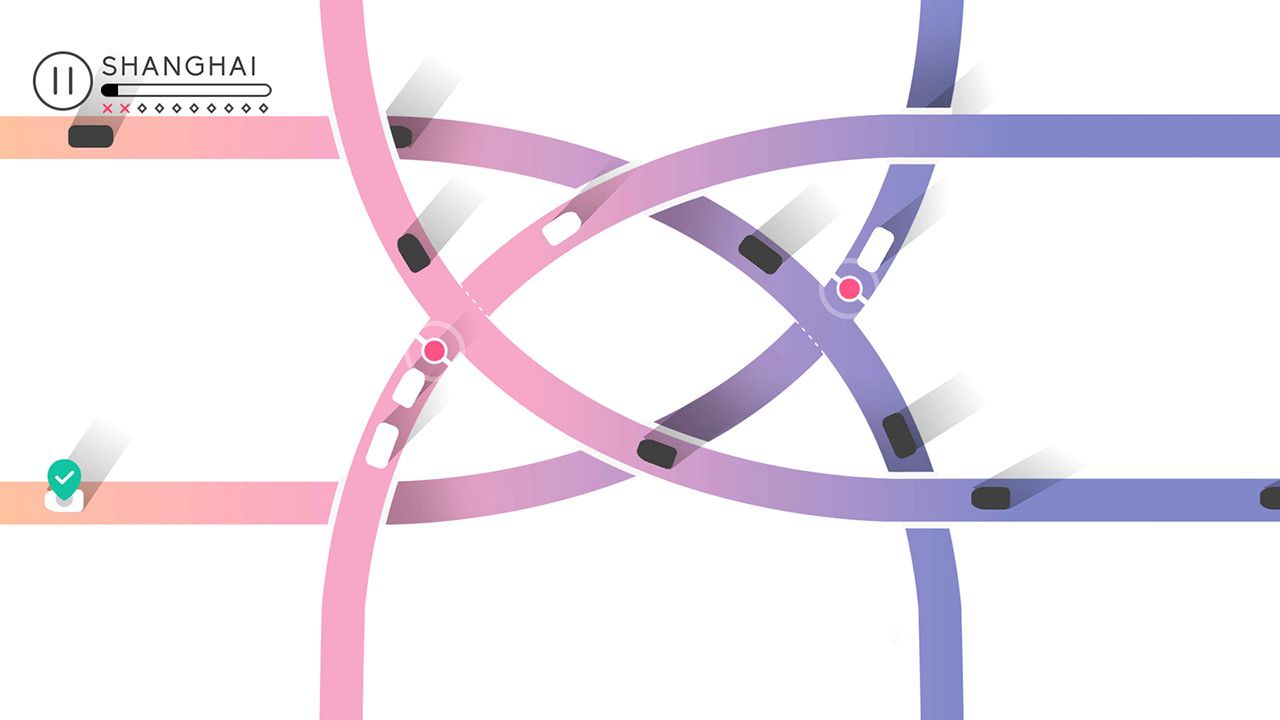 Being a mobile-oriented title, the simple and clean presentation of Traffix will be familiar to any fans of games such as Mini Metro. The interface is clean, there are very few options, and the game should run flawlessly on any PC. You get some typical, decent quality road traffic effects during gameplay, and a nice tune in the main menu. It would have been nice though to see more music included, and have it play during the levels, which can start to sound a bit dull with just the vehicle noise.

Traffix is a neat game that takes a simple premise that you've probably seen in mobile games before and makes it into an engaging piece of puzzling. Having to avoid accidents and preventing drivers from getting angry keeps you engaged, and the levels offer good variety and clever design. The clean presentation is appreciated, but it could have used a bit more music. If you're looking for a well designed puzzle title at a fair price, Traffix makes for a solid pick.

Our ratings for Traffix on PC out of 100 (Ratings FAQ)
Presentation
70
A clean, mobile-oriented look. Could have used more music, and play it during the game.
Gameplay
80
The concept may be simple, but it's entertaining and keeps you engaged. Levels offer solid variety.
Single Player
75
Lots of levels to play though, along with the usual incentive to replay for all three stars and a harder difficulty.
Multiplayer
NR
None
Performance
(Show PC Specs)
CPU: Intel Core i5-4670K @ 3.80 GHz
GPU: ASUS Radeon RX 580 8GB
RAM: 16GB DDR3
OS: Windows 7 Professional 64-bit

95
No issues
Overall
78
Traffix is nice little game that takes a seemingly straightforward puzzle concept and makes a fun experience out of it.