Alluring investigations that you can really wrap your tentacles around

More and more of Lovecraft’s lore is rising from the depths and washing up on the sandy shores of the gaming industry. The Sinking City, developed by Frogwares, is another adaptation, loosely based on Lovecraft’s novella titled The Shadow over Innsmouth, which told of a chap who visited a mysterious town and barely escaped from the clutches of ghoulish sea creatures. Like that story, the game involves the exploration of a decaying seaside town, only this time it is heavily flooded. Players can shoot fishy abominations, with basic weaponry and limited resources. And in between bouts of clunky action, they will solve a myriad of intriguing cases that point towards unspeakable horrors under the sea. 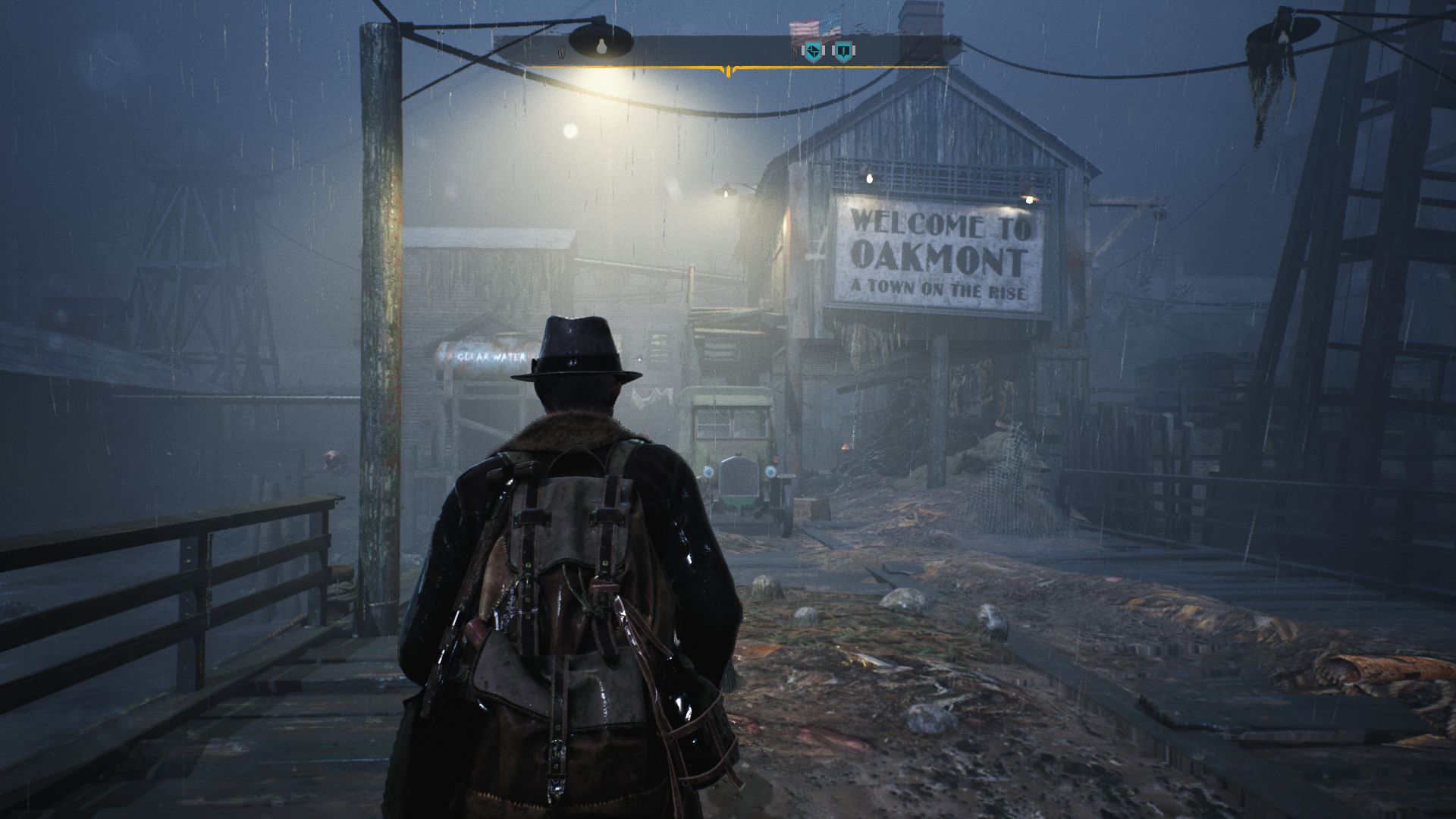 You play as Charles Reed, private investigator and sufferer of mad visions that depict sea monsters sucking him down to the depths. So you’ve come to the town of Oakmont after hearing that residents began experiencing the same nightmares just after a flood consumed half of the town. Something nearby is causing the madness and you will need to explore to find answers.

Oakmont is a fairly large location and, given the number of points of interest, perhaps a little bit too big. It is broken into districts, cut off from each other because many streets are flooded. A boat is required to navigate the waterlogged channels, as even a short swim will bring deadly eels to your heels. Telephone booths allow fast travel once you find them, so you don’t always have to take the scenic route. Any buildings that can be explored are marked with special signs—some warning of dangerous foes inside—which helps immensely when exploring a world with so many un-enterable buildings.

Despite Oakmont’s watery disposition and ever-present dangers, the city is alive. Many people roam the streets, including other travellers beckoned to the town. Police patrol and cult members shamble in alleyways. This high population is a diversion from the source material and feels distracting. The glut of humans is also prone to issues, as they get stuck on objects or just twirl about on the spot. If you turn fast enough, you might see a dozen NPCs appear in the middle of a previously-deserted road. These presentation issues are a blemish in an otherwise intriguing setting because the gloomy city oozes atmosphere, aided by forlorn music and continually depressing weather conditions. 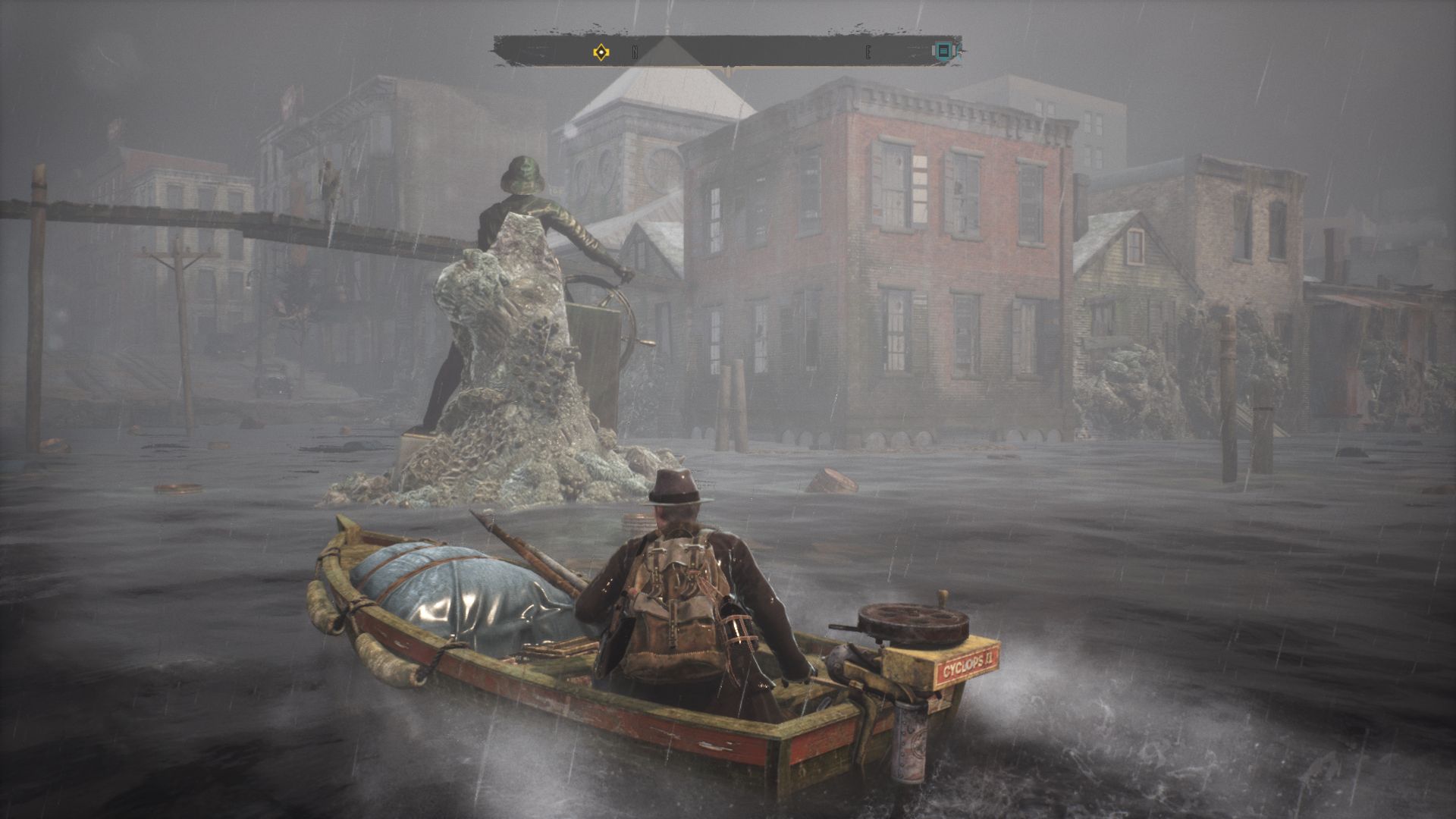 The well-populated city has many cases to solve. In order to track down the source of the visions, you will have to help others like in a traditional RPG. The variety of mysteries is impressive. Along with the usual murders, there is a fish poisoning, kidnapping, sea expedition gone wrong, failed execution, and an ancient mummy pulled from the depths and brought back to life. Every main case is enhanced with plentiful world-based storytelling and background lore. Cases are connected to the visions which are linked to unknown things beneath the water surface. At set points in the story you will need to dive underwater and walk clumsily along the seabed. Despite the ocean depth, these interludes are shallow and distract from the compelling investigations.

Solving the primary cases is a fairly simple and repetitive process. First you head to a crime scene (or place of interest) and rummage around for clues. It’s a basic treasure hunt and it can take a while to find everything. Once you find all the pertinent items, you can relive moments via a special retrocognition sequence. Retrocognition involves chronologically sorting scenes from the past, although it is rarely more challenging than numbering three obviously-linear sequences. Using this special vision mode, and viewing other unpleasant scenes, will eat away at your sanity. Rarely does Charles’ mental state plummet low enough to conjure dark apparitions, which are typically removed by taking an antipsychotic or extricating the immediate area, so the sanity mechanic can usually be ignored.

Once all the main clues have been located, and your mental state is healthy, then you might need to undertake research to find the next link in the chain. This is when you head to specific buildings to find information within newspapers, police files, legal documents, and books. Researching is basic, requiring only the selection of three topics (period, district, type, etc.) that will match the selected clue. You won’t be browsing weeks of newspapers or flipping through individual case files. Harder difficulties remove indications on which clue is the important one, but observant types will never need the help. 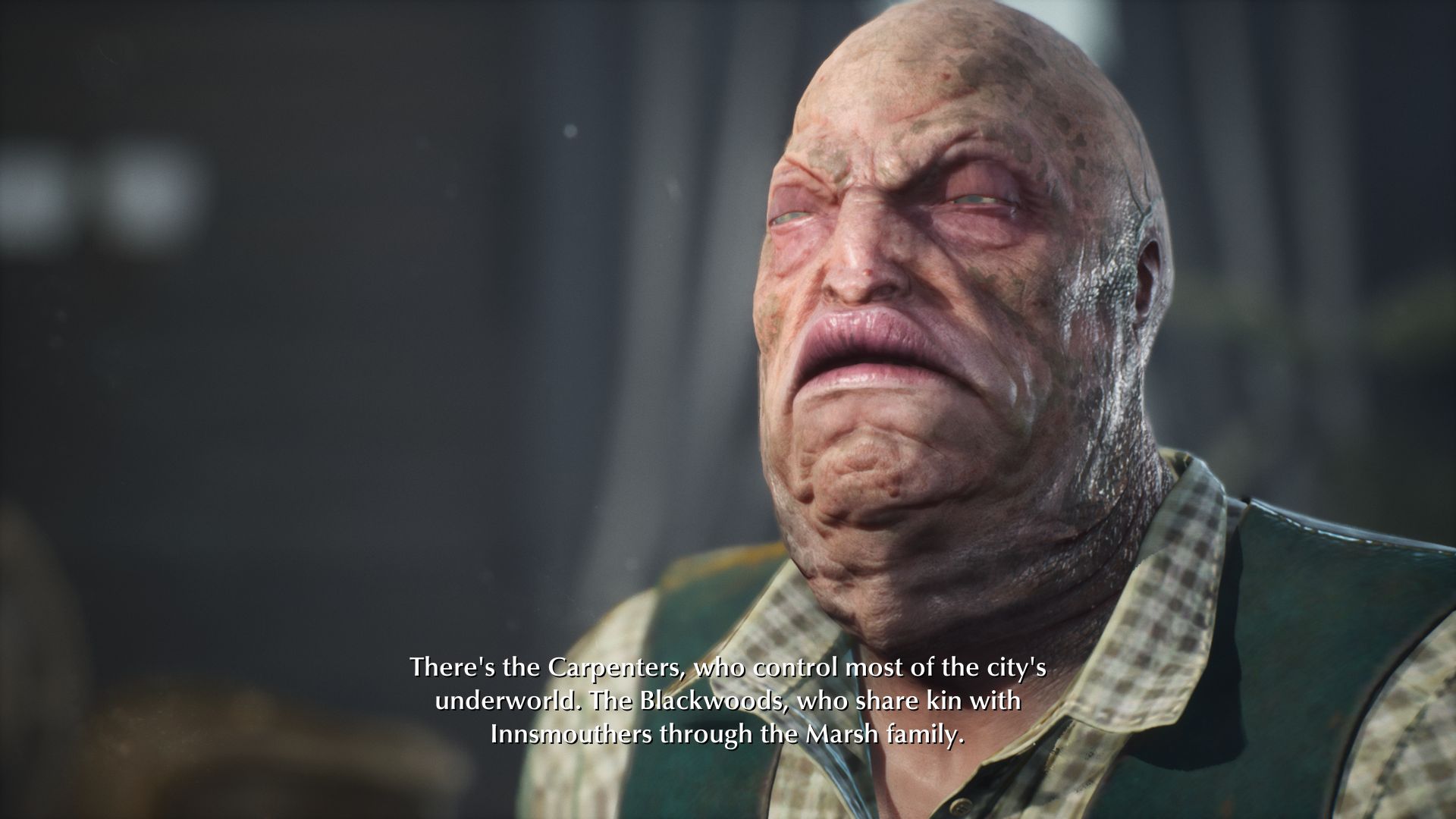 At the end of each case, you will have to make a big decision based on the evidence at hand. These choices are absolutely delightful in their wickedness. Do you give up a poisoner and let a dangerous cult go free, or do you help to poison innocents to stop the cult from strengthening? Nearly every main case boils down to the lesser of two evils. And there is always a good balance between evidence that gets more complicated the deeper it is examined. The downside is that most choices do not have a lasting consequence. Even big choices can lead to the same result, as characters might die regardless. More of the surviving characters needed to reappear, just to offer the illusion that these agonizing decisions had the impact that they so wonderfully insinuate.

When you’re not searching crime scenes and gingerly exploring the decrepit city, then you might be shooting the vile creatures that get in the way. The combat is rudimentary. Creatures spawn in buildings and, while you can stealth around some, they tend to appear in random spots that require whipping out the revolver. Ammo, health, and grenades can be crafted, and you will get better weapons as the game progresses. Dismal carrying capacity makes it hard to gain permanent ascendancy, even when resources respawn inside containers. With only a handful of enemy types to fight, and a few boss battles, the action is tolerable because it is infrequent and brief.

Shooting is clunky. Enemies have some weak-points to exploit and they do jump side to side in order to make for a frustrating target. Most combat areas are cramped, so positioning is important when foes like to get into melee range. Like the humans roaming the streets, the sea horrors have trouble moving about. One large foe got stuck in a door and a passing policeman began shooting at me while I was peppering the grotesque beast with bullets. Along with some angry police officers, other humans can be enemies, although main characters cannot be killed until certain dialogue options are selected. 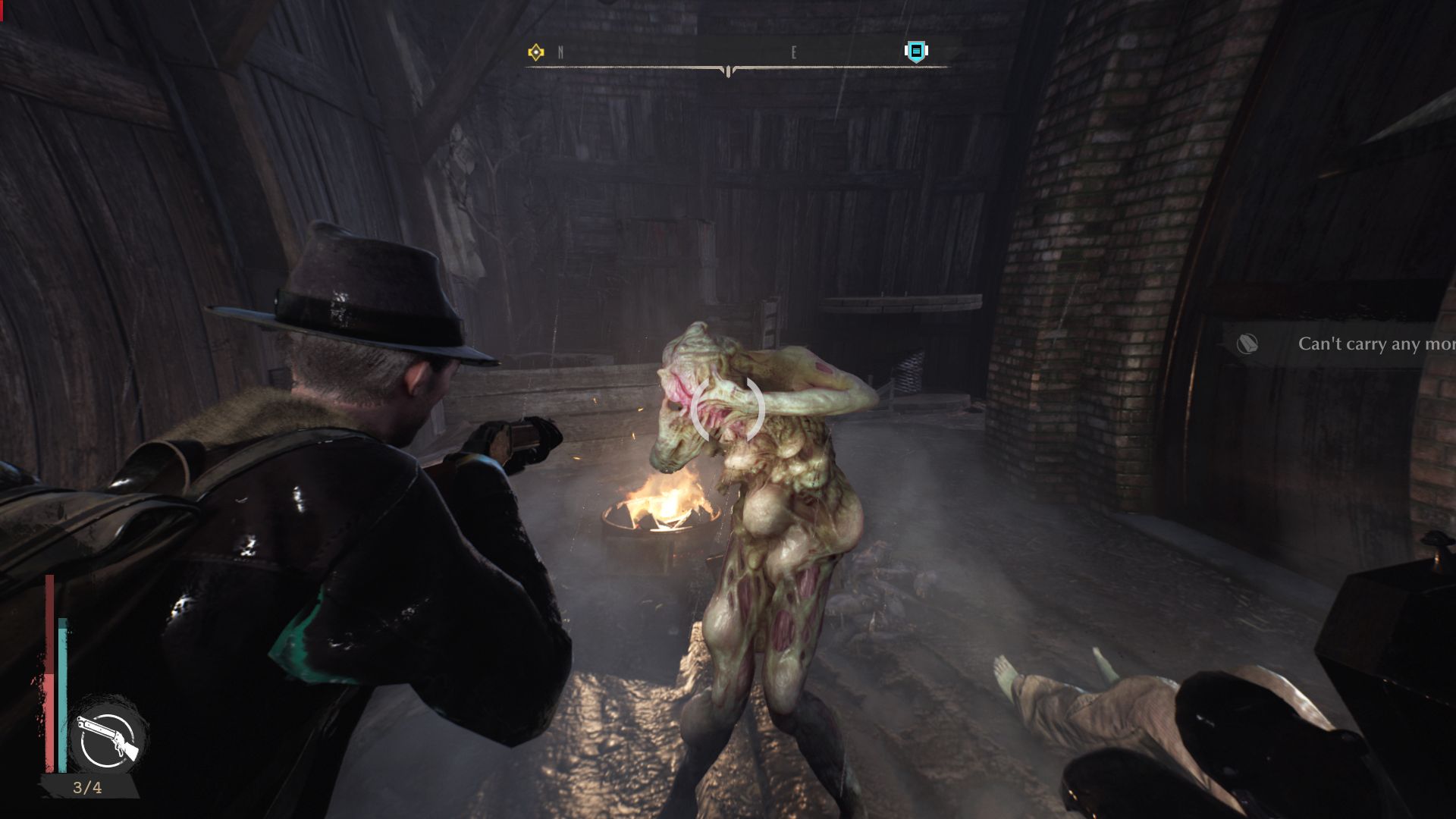 If you crave combat or resources for the next fight, then infected areas offer more of both. These are typically cordoned off streets with monster spawns and resource crates. Killing foes is a quick way to gain experience but this is only used to level up a set of extremely bland skills that increase things like health or inventory capacity. Given the size of the world and its non-linearity, it is likely that you will come across monsters that absorb more damage than you can deal. In these cases it is best to run away.

As such, the overhead map becomes incredibly useful because you can mark the dangerous locations and return later. Many other icons can also be placed, including individual clues on a case-by-case basis. If you get stuck, switching to another case will hide icons so the map is not jammed with extraneous tags. You will spend a lot of time looking at the streets from this 2D view, trying to locate a secret lab or a canning facility. Fortunately it is easy to use with the mouse, like all the menus, and only improves exploring the large open world.

Although The Sinking City is not the best looking game, it is not a bad experience from a technical perspective. None of the cases had any progression issues, although it is dubious that you need to reveal addresses before you can enter them. The world looks fairly good despite a bunch of muddy textures. Building interiors are reused, but furniture layouts are usually quite different. Unlike the houses, there are not many duplicated characters through the main story. Their voice work and designs are good too, with some having an odd scaly appearance. Framerate was reasonable on nearly max setting (highest draw distance was unplayable in the suburban district). Even the load times were fairly short, which is important given how often you go back and forth between areas. 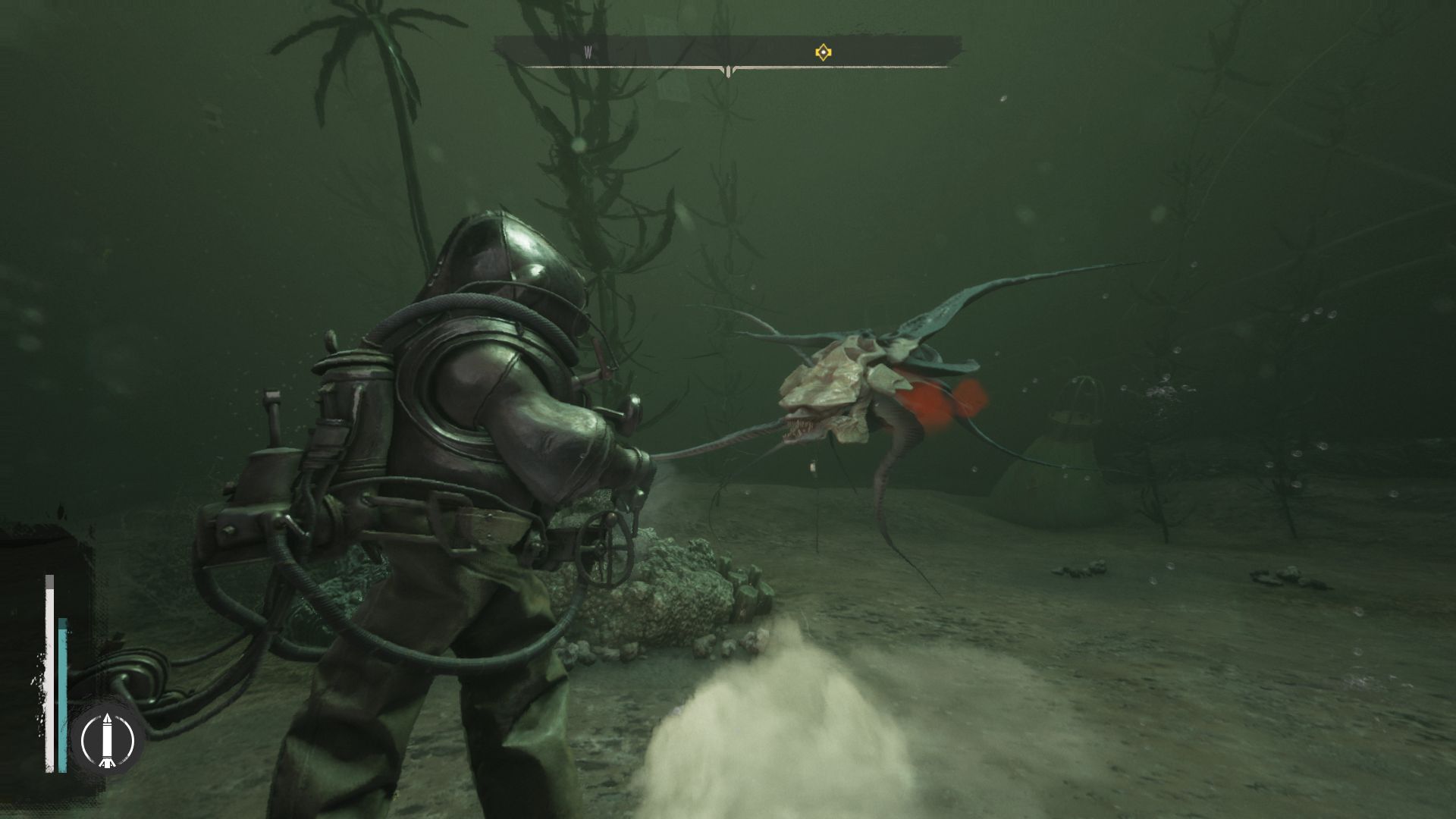 If you are looking for a game that delves into the Lovecraft universe, The Sinking City is definitely worth a look. It is a bit like a less polished version of Vampyr, offering a similar dark open world with mysteries to uncover. At least the story is well told, linking together underwater horrors with twisted inhabitants that reside on the surface. While the city is slightly too large, it is populated with a wide variety of interesting cases to reconstruct. The choices at the end of these cases are fantastic but the lack of lasting consequences and repetitive process stops the detective element from truly excelling. With some clunky and infrequent combat, and a few odd missteps with its world, The Sinking City just needed a bit more depth to rise to the top.

Our ratings for The Sinking City on PC out of 100 (Ratings FAQ)
Presentation
70
Not the best looking game but still rife with atmosphere. Distant musical notes and grim audio sounds helps to set the tone. Muddy world textures contrast with good looking characters.
Gameplay
60
Combat is clunky and the investigative process is repetitive, despite the variety of cases. The open world size is a fraction too big considering how many places can be explored.
Single Player
85
Nearly every case is brilliant and they link with the overarching story. Tough choices bring it home. It takes around 12 hours to complete the main story, but some choices might entice a replay.
Multiplayer
NR
N/A
Performance
(Show PC Specs)
CPU: Intel i5 3570k
GPU: XFX RX 480 GTR Black 8GB
RAM: 16GB DDR3
OS: Windows 10 Pro 64-bit

70
Runs fine at near maximum setting. Loads are fairly quick, which is important considering how often they are required. There were a few too many navigation issues for both monsters and humans alike.
Overall
75
The Sinking City is a decent adaptation of Lovecraft’s work, meshing dark themes with a variety of great investigations that culminate into tricky decisions. If the combat was less clunky and the world more polished, it would have beckoned all to its desolate shore.

All videos for The Sinking City (8)
Advertisement ▼