Isometric mushroom madness that grows on you

You may find your interest piqued upon hearing the deliciously cheesy and over-the-top title, Mushroom Crusher Extreme. Is it some wacky ripoff of Super Mario Brothers? Is it a heart-pumping action shooter that fires killer fungi at you? Perhaps some kind of zany party game that involves taking out shrooms? As it happens, the actual result doesn’t quite live up to the epic nature the name implies. Regardless, this retro throwback, despite a few odd quirks, proves to be a fun and unique action strategy game. 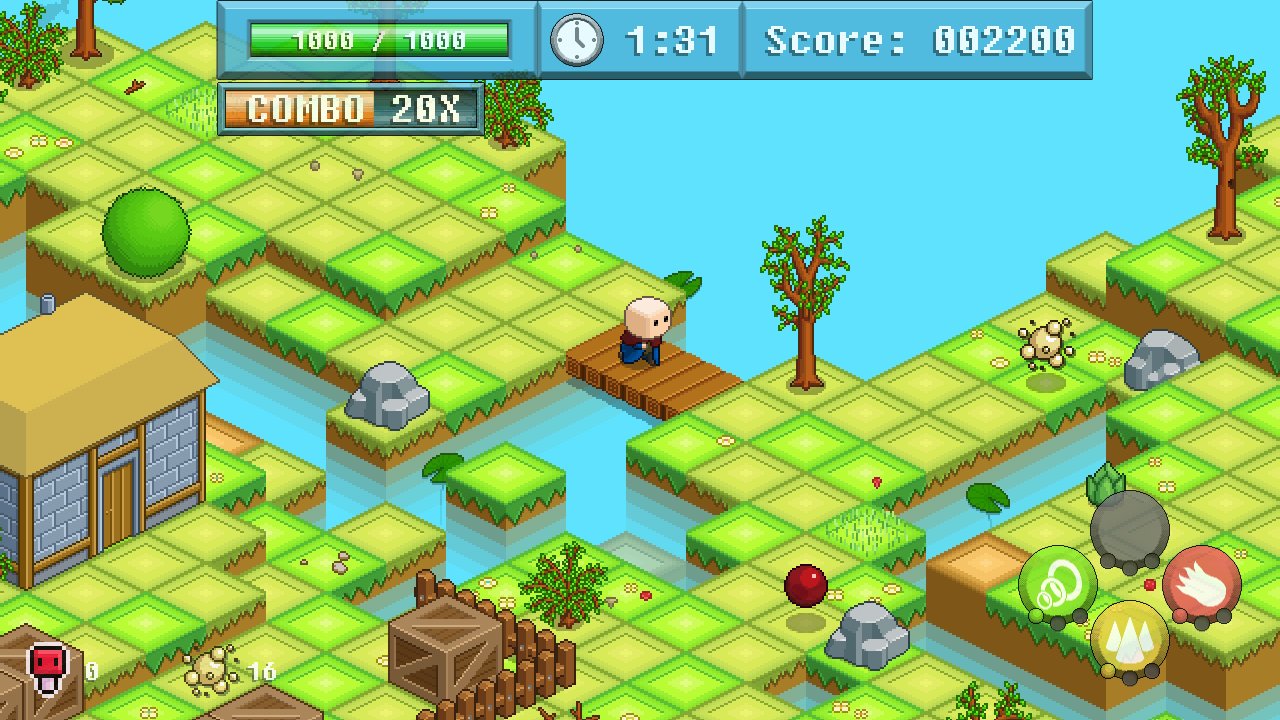 With Mushroom Crusher Extreme, developer Mushroom Party uses the now common indie practice of paying homage to oldschool gaming; though they’ve done so with a somewhat distinct approach. Rather than rolling out a more common action sidescroller or top-down shooter, the game uses a semi-3D isometric grid consisting of a hodgepodge of platforms and gaps from which you navigate through. You take control of the mushroom-headed wizard named Zenon, who must use spells and abilities to take on a massive horde of mutant shrooms invading his lands. There’s virtually no story outside of this, but let’s face it, for an indie called Mushroom Crusher Extreme, would you expect there to be?

As you’d figure with a game using such an atypical perspective, you’ll find that controlling Zenon requires a bit of a learning curve; even with the arrow keys rather simply being coordinated to your spells in hotkey fashion. In my case it was more of a prolonged learning curve, since my experience with isometric-based games has been fairly limited. As the field is set from a diagonal, pseudo-3D plane, using the WASD keys don’t quite translate to the exact direction your character moves on screen.

I actually resorted to turning my keyboard at an angle to more accurately match the grid on screen to help overcome the mind-screwy nature of the directional movement. Thankfully, if you’re not feeling the default controls, you can tweak them a bit, and can alter more fine-tuned details like movement sensitivity too. Once I settled on the control scheme that felt right for me and took my lumps for a bit, most of it clicked. Soon enough, my efficiency - as well as my enjoyment of the game - increased significantly. You’re also dropped into a brief tutorial right off the bat, which helps you find your footing somewhat.

The premise of Mushroom Crusher Extreme is rather straightforward. Your character will fight his way through an initial set of 12 stages divided into 4 biomes, which are themed off each of the 4 seasons. As a side note - every stage comes with more grueling night time variants chock full of crazier foes, which technically doubles the total stages. These act as a defacto higher difficulty as well as unlockable bonus levels. Gaining access to them requires you to go through the punishing process of earning an A rank in each normal stage. To do this, you basically need to augment yourself with several upgrades and complete an air-tight run of each level. 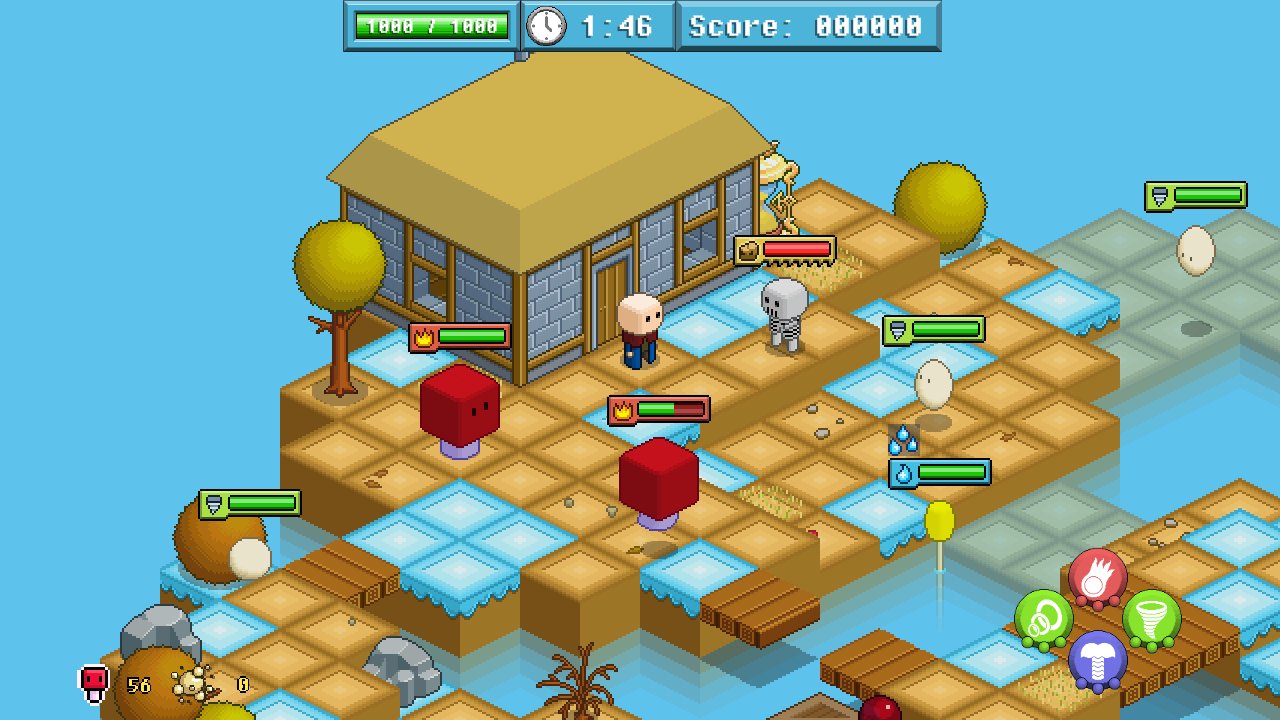 First though, you’ll have to fight your way through the initial 12 levels and survive to the end of the designated time, which can be brutal enough. Naturally, you’ll begin with the calm and easygoing spring stages, and work your way to the grueling, more hostile lands of winter. While there’s little variance in the aesthetics of the basic isometric designs, each set of stages is tinged with a neat seasonal overlay to provide some character, and the grids become increasingly vast and complex.

You’ll need to balance aggression with evasion, as mushroom creatures sporadically spawn all over the maps, which you’ll want to clear with haste. These enemies take on a number of traits; from bulky red shrooms that hop around, to Ghostbusters-esque Slimers which leave toxic sludge trails, to large beavers that roll around like Sonic the Hedgehog. It behooves you to learn their behaviors and weakness, as clearing them out swiftly and unscathed can mean the difference between unlocking the next stage or being forced to restart.

You’re initially given a limited set of spells to take them out - though you’ll earn new abilities, and upgrades for your old ones as you progress and complete a laundry list of Accomplishment thresholds. Taking out enemies will net you points which will be added to your total, and stringing together kills quickly enough grants you more valuable combos. Oddly though, points from enemy kills seem to take a backseat in value compared to time of completion and remaining health, so you’ll want to mind these stats. You’re given a rank of D through S depending on your performance. Landing at least a C rank is the minimum requirement to unlock the next stage - and will likely be your ceiling until you’ve logged in at least a few more hours dedicated to grinding.

Navigation can prove tricky given the visual ambiguities that come with the 3-quarters perspective. This is especially true when faced with clusters of gaps, obstacles, or higher/lower platforms while trying to flee gaggles of foes harassing you. You might think you can salvage a jump, or hop up safely to higher ground, only to find yourself stuck and desperately spamming your spell, waiting in vain for the 2-3 second cooldown to end. Players who prefer their gameplay tight, clean, and precise may find some issues here. Still, practice makes perfect, along with ample grinding in this case - and Mushroom Crusher often demands both. 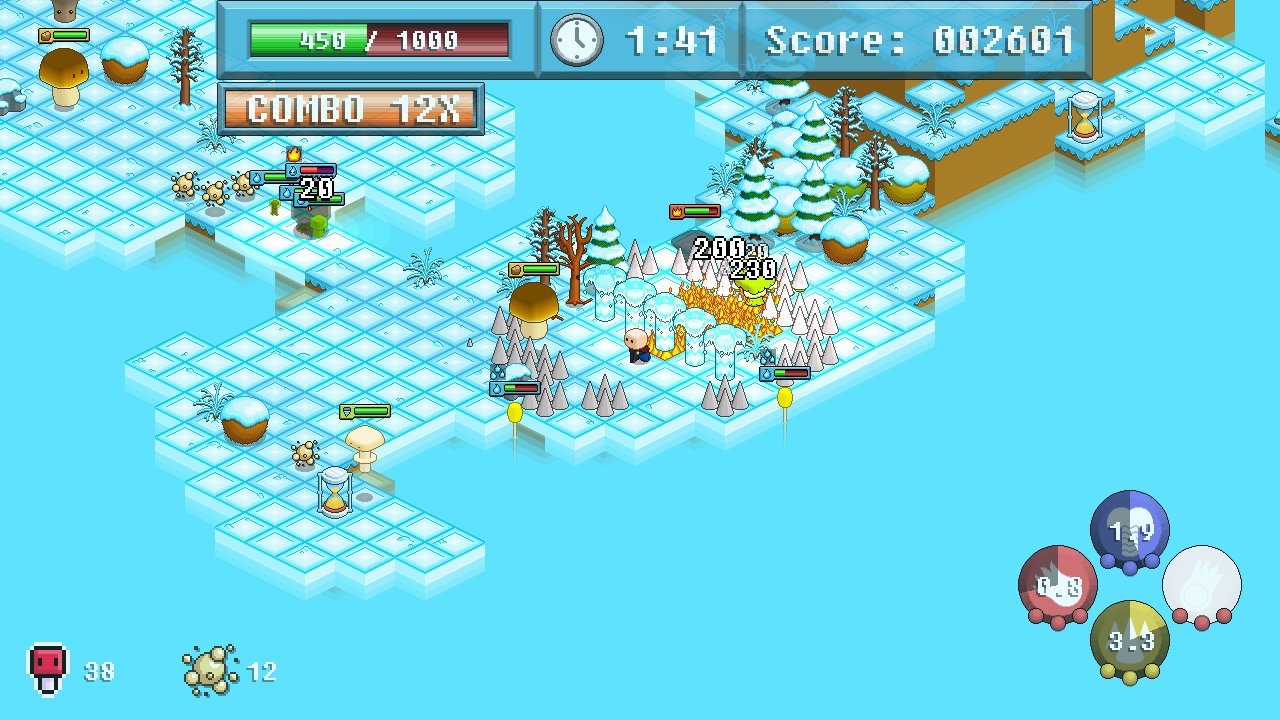 Thankfully, even a loss allows you to accumulate Mushroom Spores dropped by enemies; the game’s currency system. You’ll need to collect many of these Spores to upgrade your spells and stats, as well as buying new elemental spells. Certain achievements will additionally net you these coveted Spores. Spell upgrades also require you to kill a given number of enemies with the spell you wish to improve. On top of all this, you can pick up rare Trinkets randomly dropped from enemies, which provide stat increases and buffs. These features prove to be fine elements of depth and customization, which lend a sense of progression to a game that can border on basic and repetitive at times.

While coasting through with the minimum required C ranking is rarely daunting, gaining access to and finishing the 12 bonus night stages presents a jarringly steep difficulty spike. As mentioned, you won’t just need to survive here to notch those A ranks, but you’ll have to execute with military precision. This is where Mushroom Crusher stresses its puzzle elements, and often becomes less enjoyable as a result. Each of the dozen plus enemy types have a weakness to a particular element, and killing them with their Achilles Heel lands you a much needed time bonus. Pulling off these nuances successfully makes for a tricky, yet satisfying feat.

Though, with mechanics that verge on dicey, and tons of enemies hurled at you - juggling your 4 spells to match them up with specific enemies on the fly can feel overwhelming, and the more exciting action elements get somewhat lost. And it surely doesn’t help that weaknesses aren’t too apparent. Sometimes they make sense - spherical baddies being affected by a Spike spell - but other times they don’t. Why exactly is the Slimer weak to Fire, or the Skelly vulnerable to Shock Wave? Who knows. But you pretty much need a firm grasp of it all to open the bonus stages - which pretty much amounts to half the game’s content. And by the time you’ve grown powerful/effective enough to do so, you’ll likely be hard pressed to keep going anyway.

If we’re to disregard the rough and mostly redundant bonus night levels, Mushroom Crusher is somewhat lacking in content. It should be noted that a local multiplayer feature is also included, though. Multi can be both fun and helpful, yet playing split-screen when huddled over a keyboard can feel awkward with all the action taking place. An online mode is also present, but in my over an hour of trying to matchmake yielded a grand total of zero results. 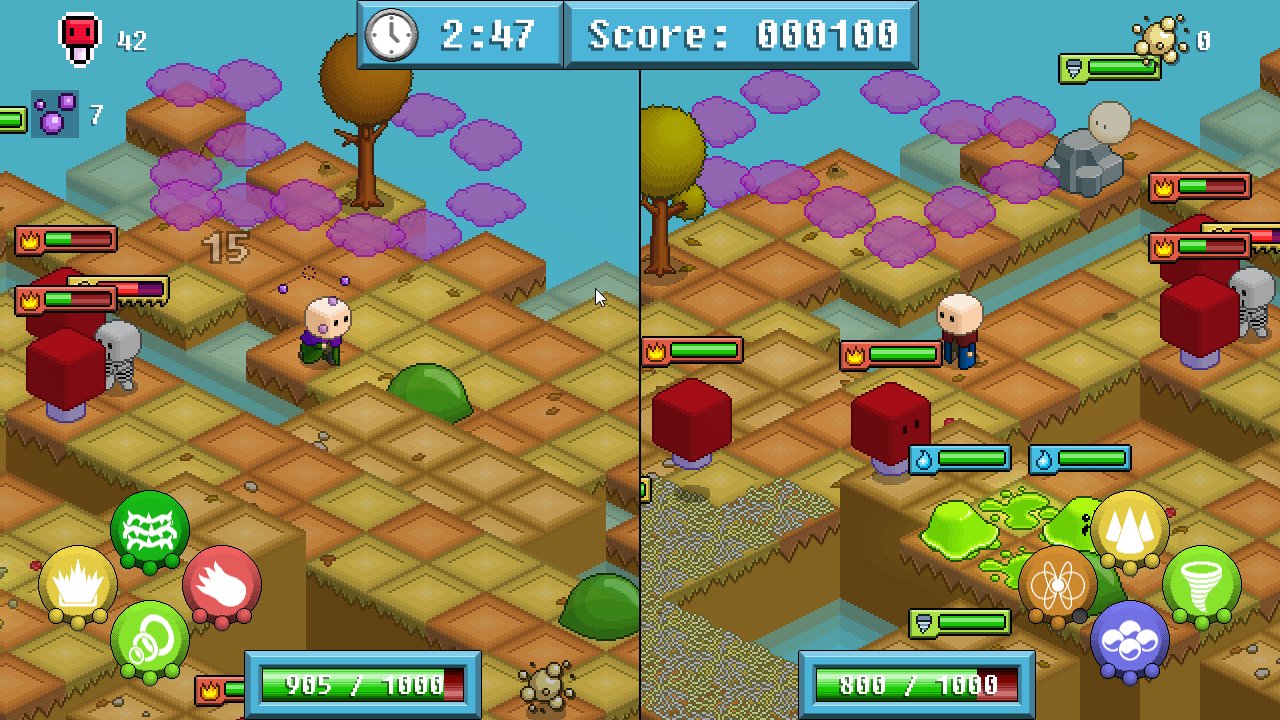 From an aesthetic standpoint, Mushroom Crusher Extreme doesn’t go out of its way to wow you, though the simple, early 90s PC nature of the graphics produces a charming retro vibe. Each season has its own subtle backdrop that at least vaguely captures the character of the 4 seasons, though the environments could do with a bit more decorative flair. The upbeat audio tracks help to amp up the intensity, and feel appealingly 80’s/early 90’s with their basic synthetic tunes. The Autumn season and bonus stages in particular contain some enjoyable rich and intense melodies that feel delightfully "retro JRPG".

Overall, Mushroom Crusher Extreme doesn’t excel in many areas, but it doesn’t falter much either. The foundation is there, though its odd, slightly disorienting nature requires some time to find one’s footing. The lack in depth, short campaign, and borderline repetitive nature may leave some wanting more. And yet, gamers who commit the time will be rewarded with a palette of collectables that will eventually make you a fungi-force of nature. Blasting colorful killer mushrooms, playing with new and increasingly potent spells, and racking up higher scores offered some fun and satisfying moments. For a mere 8 bucks, it’s worth trying out, particularly if isometric retro games are your thing.

Our ratings for Mushroom Crusher Extreme on PC out of 100 (Ratings FAQ)
Presentation
65
This isn’t the prettiest game ever, but it clearly wasn’t intended to be. Some of the spell animations are fun to look at - and you’ll be seeing them frequently. The audio tracks are surprisingly enjoyable; particularly the Autumn stages.
Gameplay
75
The layout of the stages feel a bit random and uninspired, though the backdrop of each season’s stages provide a tinge of authenticity. Navigation and spells require a learning curve, but they’re reliable enough, and do click eventually. Despite the time and struggle to obtain them, unlockable spells, trinkets, and stages help keep things interesting.
Single Player
67
Bonus evening stages notwithstanding, the bulk of the game can be completed in a handful of hours. Accomplishment thresholds, which yield collectables/upgrades flesh out the experience and add to the replay value somewhat.
Multiplayer
55
Split screen multiplayer can be tricky given the cramped controls coupled with action overload on screen, but provides some goofy fun and can prove helpful once you’ve gotten used to it. Online play is a nice feature, but be sure you have a friend to play with, as lobbies are a ghost town.
Performance
85
The game can go hit the occasional slowdown during particularly heated battles with several foes on screen at once, but otherwise it runs smoothly.
Overall
67
Mushroom Crusher Extreme is an amusing, albeit sometimes frustrating, isometric retro romp. It offers some thrills for those willing to overcome the somewhat clunky mechanics, and repetitive grinding needed to tap into all of its content.