We get a second look at the upcoming futuristic adventure

Excitement has been steadily building for CD Projekt Red's upcoming sci-fi RPG, Cyberpunk 2077. Following its E3 2018 unveiling, fans have been eager to learn more, but the company has been keeping a tight seal on the project. It took a full year before we got to see the game again, at E3 2019. Following a bombastic pair of trailers and the reveal of a new character played by Keanu Reeves, this year's show only helped to further increase fan interest, as the game now heads towards its planned release date in April 2020. We had a chance to have a second look at this title, with our 45+ minute demo focusing on gameplay and player choice. 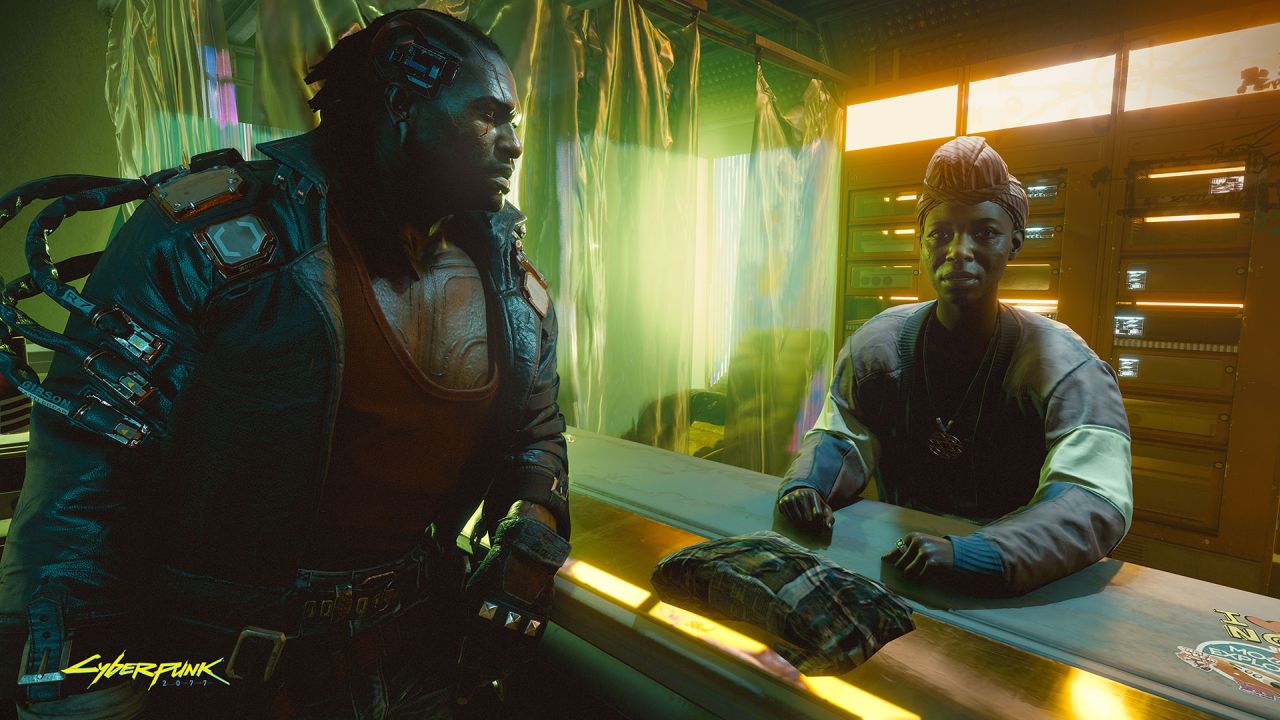 Our hands-off demo was narrated by CD Projekt Red senior level designer Miles Tost. To remind everyone, the game takes place in Night City, a sprawling open world metropolis that's divided into six regions. Body modifications, power, and glamour are what its citizens strive on. The player character named V is a sort of mercenary outlaw, trying to survive and thrive in this city. As mentioned in last year's demo, players will be able to customize V to their liking – for example by choosing your background as a street kid, corporate man, or a nomad. You can customize your face, hair, and starting abilities. The demo took place around the middle of the campaign, as V has already unlocked some advanced abilities. We also got to frequently observe a switch between two different demo character builds – a male V focused on stealth, and a female V that was built for combat.

The story thread V was following involved a chip that had been implanted in his neck. This device apparently contains the secret to immortality, but V cannot decipher it alone. As such, he needs to seek out a hacker organization called The Voodoo Boys. In order to contact them, he has been told to visit a chapel in the Pacifica region. This Haitian community was once meant to be a global tourist destination; but after funding was pulled from the project, it now sits as a lawless and mostly abandoned place of unfinished buildings and empty shopping districts. As V entered the chapel, he is approached by a mysterious man, telling him to go back outside and to the back of the butcher shop. Players will have different dialog choices listed, some becoming available only with certain skills, or your character's chosen background. We leave the chapel and go around the corner to the back of the butcher shop, where we meet a man named Placide. He agrees to help us understand the chip in our neck, but first we must help him with a problem.

We follow Placide through the streets of Pacifica, as he shows us the Grand Imperial Mall in the distance. According to him, a gang named the Animals have moved into the abandoned mall, and have been causing trouble. He wants us to get in there and sort things out, as well as find a high tech van. While on the street, we figure it's a good time to stop by one of the vendors. In the Tech Shop, using a fairly traditional RPG store interface, we scroll through a list of items and purchase a new jacket, as well as some daemons – software that's used to unlock new abilities. We then continue to follow Placide to his offices.

Sitting across from the man, we discuss the deal – V will clear the Mall, and Placide will help us with the chip. However, he also wants to link with V – which essentially means completely giving up all control and information of your brain to him. There is a spilt-second dialog choice, and V yanks his hand away. But after some convincing, as this is non-negotiable, he lets Placide link into him. Now, Placide is able to see and hear everything that V does, and can also communicate with him via audio and video in the corner. We also get an appearance from Johnny Silverhand, a mysterious ghost/glitch character that haunts V and appears as a hologram, played by Keanu Reeves. Johnny advises V to be careful on this mission. 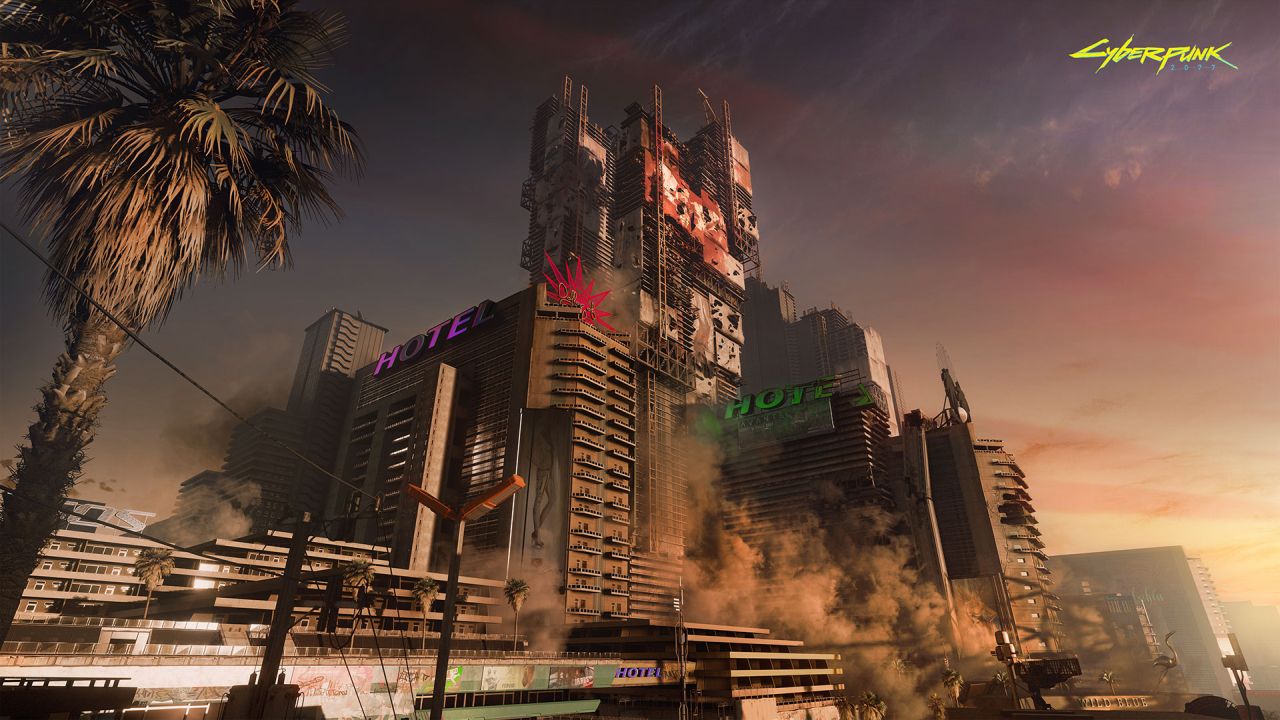 With the link complete, V ventures outside and gets on a motorbike, and rides over to the mall. We pass through a very detailed homeless camp under one of the bridges. Once at the mall, we are again presented with the option to blast our way through the front door, or go around the back silently. Playing as the male, stealth-focused V character, we chose the latter; the developers reminded us that the game can be completed with zero kills. We sneak around some guards in the parking garage, and climb through a vent. Many of the stealth gameplay elements were highly reminiscent of modern Deus Ex titles. Sneaking up on a gang member, we had the options of pacifist or lethal takedown. We opted for lethal and disposed of the body in a trash shoot. In the next hallway, there was a security camera, and a nearby door. We performed a remote hacking minigame, in order to get into the system and disable it. However, something goes wrong, and we nearly lose control of our mind. Placide informs us that there is an enemy netrunner (advanced hacker) that is also in the system and has attempted to remotely eliminate us. He stopped the enemy just in time, and will try to keep us safe so V can complete the mission.

With the cameras down, we move on to the next area. Here, a few enemies are working out in a gymnasium. We hack a robot so that the enemy practicing with it gets knocked out, creating a distraction for his friends. Another enemy is doing bench presses, so we overload the machine to a weight he cannot lift and he gets crushed by it. We distract another set of enemies by a vending machine, and sneak up behind them to use a deadly whip called Nanowire and slice them apart quietly. In the large lobby of the building, we see the tech van in the far corner.

Now, the developers want to show another approach, so we rewind time back to the hallway with the camera, and switch to female strength-focused V. We have a quick glance at the perk screen and see how it's different between the two characters. Players will be able to place points into various categories of this fluid system, and not be locked into a specific class. With the strong V, we ignore the hacking and just bust down the door, which gets us straight into the same large lobby with the van in the corner. Enemies notice this and pour into the area, as we engage in a shootout using rifles, a revolver, and grab foes to use as a body shield. In the middle of the lobby is a mounted machine gun, so we simply rip it off the stand and start unleashing havoc.

Having reached the van, we switch back to stealthy male V. We hack the van and learn that the government-like Netwatch agency are the ones using the Animals gang. We get a lock-on for the nearby netrunner that tried to kill us, but to reach him we need to fight more enemies, so we're back to the female V. After taking out more foes as we venture through the mall, we encounter an Animal Alpha character, a large brute. We could sneak by, but with our strength build we decide to fight. After a lengthy encounter, where we pummel him with firsts, and use his own large melee weapon against him, the foe finally falls. 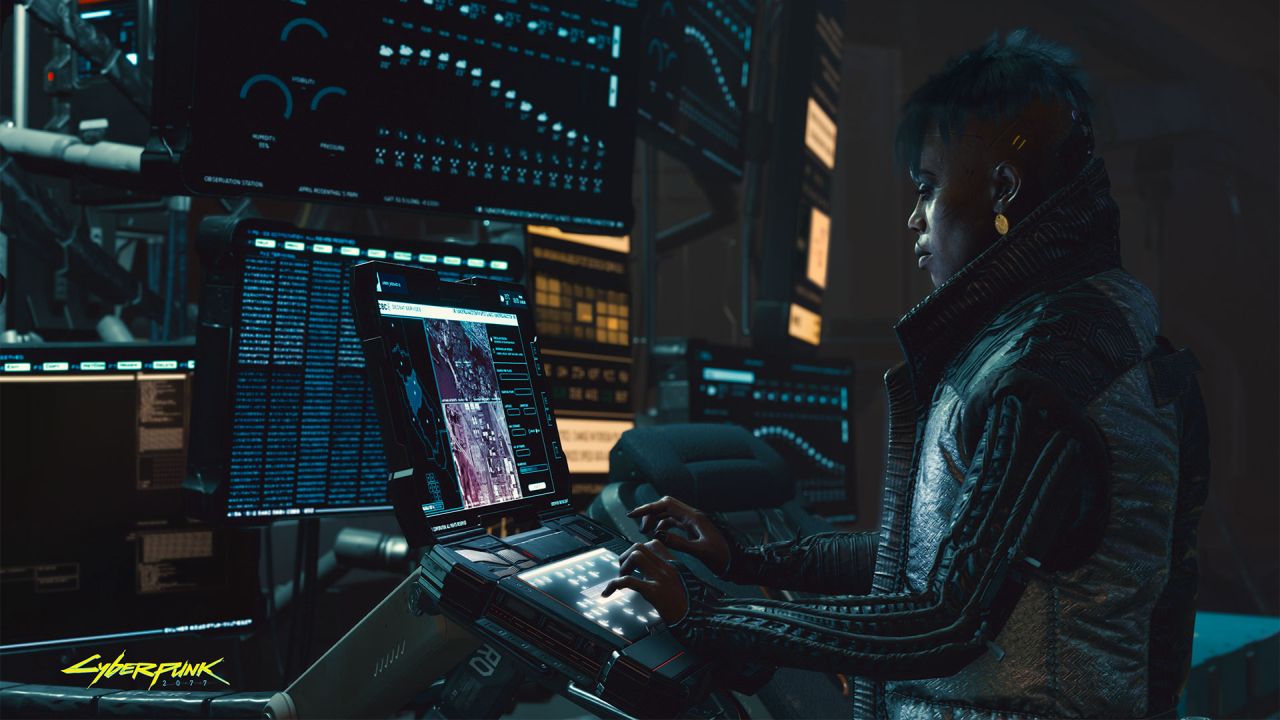 We finally reach the Netwatch agent in a movie theater inside the mall, and confront him in a room. He tells us that Placide is a liar, and he will dispose of V as soon as the job is done. Another series of choices appears, where we could believe and spare him; but V decides that the netrunner is equally untrustworthy, and eliminates him. However, it turns out that Placide wanted the information to eliminate a bunch of competition and to free fellow Voodoo Boys member Brigitte. With that done, he sends a kill switch signal to V's brain.

Thankfully, V survives, as Johnny once again makes an appearance. We converse with him just like a real character, as he moves about the room. We return to Placide and confront him, punching him in anger (another player choice). But Brigitte intervenes and tells us she can help understand our chip's design. We follow her through subway tunnels and into a crypt where the hacker group operates. V is told that he needs to visit an unknown virtual cyberspace, where he may find answers. V gets into a cold bath and is transported into a mysterious digital world, where he is promised to meet Alt Cunningham, a digital ghost of a hacker who has managed to break free into the Net. The exposition here is quick and heavy, and details are difficult to grasp. On this, the demo concludes.

Cyberpunk 2077 is looking like a very engaging and well designed action RPG. While the modern Deus Ex games have been good, this new title from CD Projekt Red looks to become the defacto sci-fi experience. We've seen its detailed and immersive open world, the expansive character progression, the varied gameplay systems, and the interesting (if somewhat overbearing) narratives. If the studio's previous excellent titles like The Witcher 3 are anything to go by, Cyberpunk 2077 looks to meet and exceed those standards. The game is set to ship in April 2020 for PC, Xbox One, and PS4.