We get an early look at the upcoming remastered game

When it comes to remasters and remakes, the video game industry has largely been leaning towards safe bets. Whether it's Shadow of the Colossus, Crash Bandicoot, Resident Evil, or Final Fantasy, the publishers are obviously erring on the side of caution when selecting which projects to invigorate. But with so many remakes proving successful, not just for the standalone releases, but in fact jump-starting the fan interest in the entire franchise all over again, smaller series are also trying to make a comeback. Games like MediEvil, Tales Of Vesperia, and now Destroy All Humans, are attempting to have a piece of the nostalgia pie. While enjoyed by many, some may find THQ Nordic's decision to bring back the Destroy All Humans franchise a bit dubious, but based on our E3 2019 demo, developers Black Forest Games are nonetheless putting in an effort to recreate this action adventure title for a new generation. 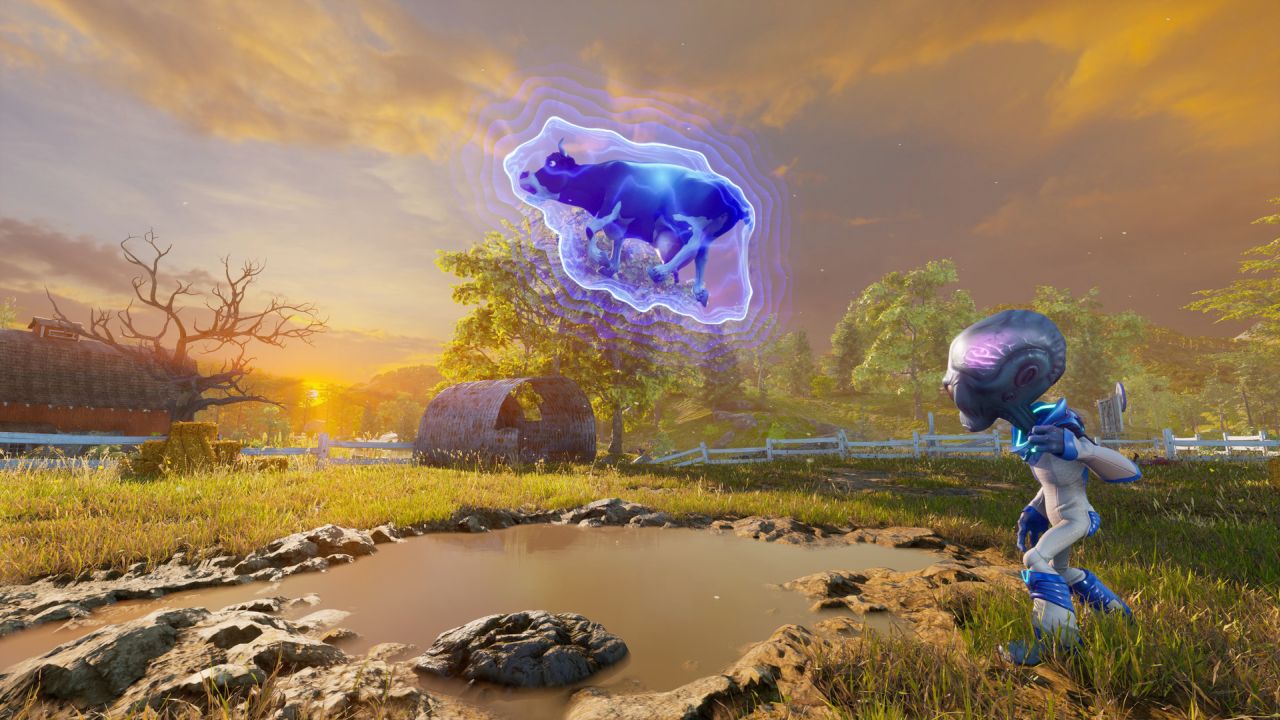 Being set in the 1950s already gives the remake a head start, because few games have ventured into this era since the original title launched back in 2005. We observed a live demo of the starting level of the game, called Turnipseed Farm. An alien race arrives on Earth in order to investigate and enslave it for their own purposes. As the alien player character, Crypto, steps out of is ship, he stumbles right into cow poo. He exchanges some snarky remarks with his off-world commander, and the developers tell us they wanted to keep the humor very much intact. This was a tutorial mission, so we got to see a few different bits of gameplay to prepare players for what's to come. We also had a chance to play through the same demo in a hands-on session, and the controls felt modernized and comfortable - something the developers ensured that they paid attention to. New moves like dashing, and glide/hovering offer expanded traversal options.

Back on the farm, we did a scan on the cows, trying to identify them as the dominant species of the planet, and read their thoughts. But "Mooo" was all they had to say. Despite this, Crypto cheerfully announced to them that he is now their overlord. To assert our dominance, we used Psychokinesis to pick up a few barrels of hay, and a few cows, and toss them around. Unlike the original game's clumsy implementation, the remake will allow players to still freely move around and even use their jetpack, while still holding onto the object they are controlling.

Our shenanigans drew the attention of the owner of the farm, who shows up with a shotgun. However, we stun him with electricity, use a shield to deflect his shots, and take him down. His wife emerges from the house in time to find Crypto extracting the poor farmer's brain. She screams for help, and soon after the police arrive. They are shocked to see the spaceship parked in the field, and go in for a closer look. Crypto beelines it towards his vessel across a pond, and the developers note that another change for the remake is that touching water is not instant death anymore - you will take damage, but have a chance to recover. With the new lock-on aim feature, we shoot at the police officers and zap them, while also blowing up their car. The devs mention that all levels will feature extensive destructibility. 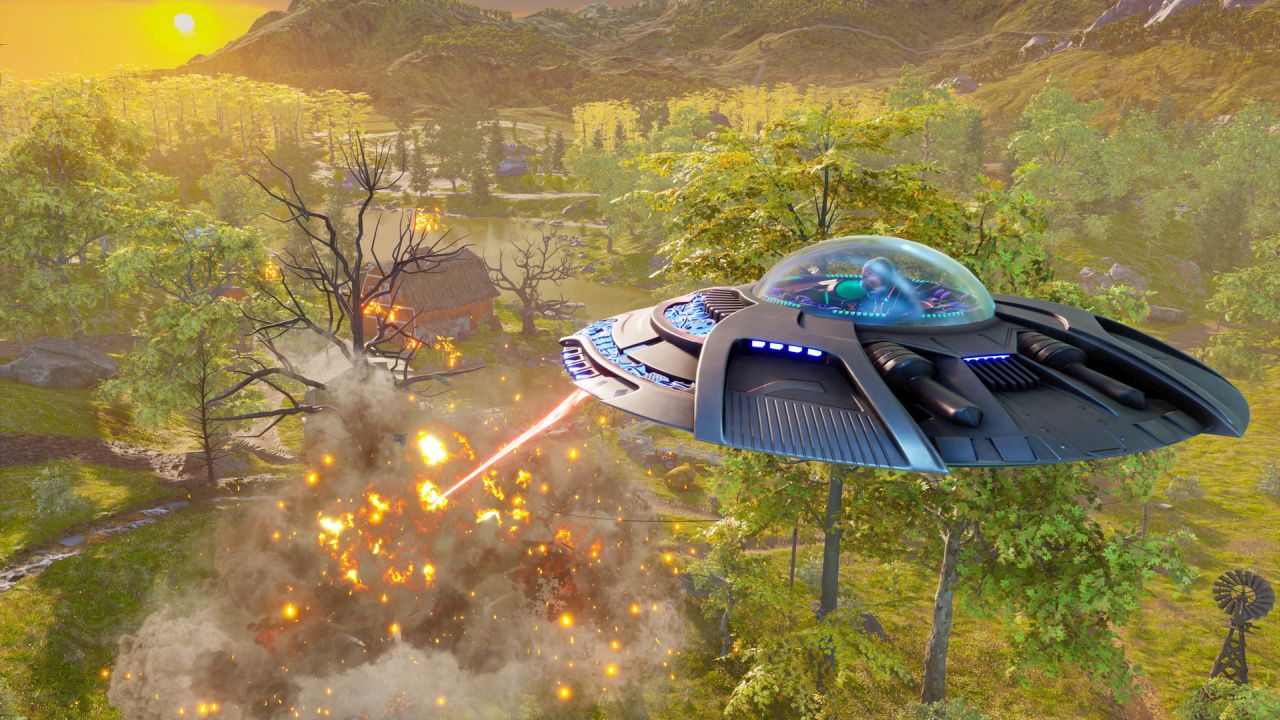 Having made it back to the spaceship, we get in and are able to float around the farm. Again, using a powerful destructobeam, we wreck havoc on the livestock and surrounding area, including the homes. Our goal here is to destroy 5 "human dwellings", which Crypto gleefully does. This sort of action brings out the military forces, who arrive with a song in their hearts. This occurs because the first level wants to showcase all types of foes for players to look forward to during the campaign. We beam them with our death ray as well, blowing up the tanks and frying the soldiers. While the original game only allowed you to hover on a single horizontal plane, the remake lets you bring the spaceship up and down in the level as you see fit. Lastly, the mysterious men in black show up to witness the mayhem, but that's where the demo concludes.

The demo was then restarted to show us some of the optional activities that levels will offer, such as a Rampage Challenge. Graded on a typical 3-star scale, our goal was to eliminate as many dangerous farmers as possible, while getting bonus points from creative moves - like throwing them into a nearby lake, or throwing flaming piles of hay at them.

We then jumped into one of the later levels on a map called Santa Modesta. Here, the developers pointed out the much more immersive world they are able to create thanks to the modern consoles. There will be more building and store variety in the town - not just the same ones copy-pasted as in the original game. Plenty of NPCs will be walking the streets and driving in cars. The game will also have a much better draw distance. We were told that the developers will keep most maps spiritually the same, but with improvements in areas that were too low on details in the original. For example, a previously sparse coastal area of Santa Modesta was shown to be remade and much more lifelike. 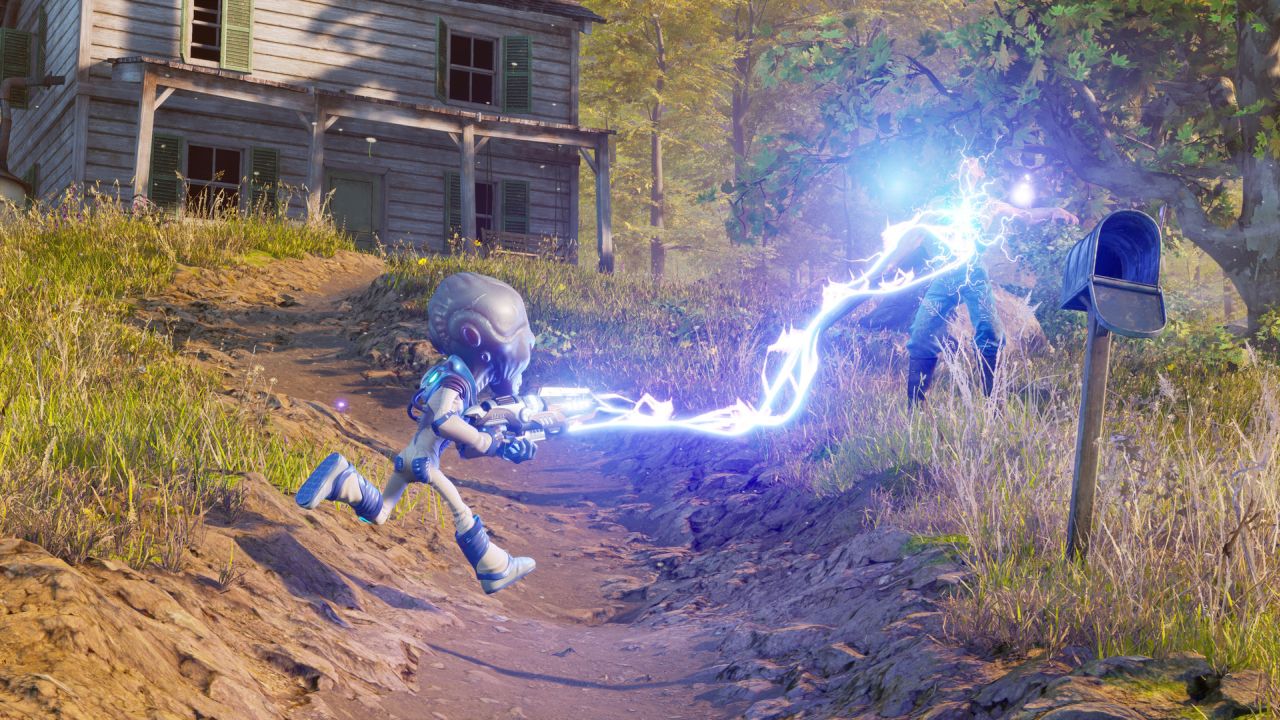 While Destroy All Humans was not a huge success at launch, the game has developed a good following over the years, and those fans are clearly numerous enough for the title to get a remake. It's also perhaps because the publisher feels the mechanics and setting are still quite unique, and have stood the test of time. But even if you are already a fan, Black Forest Games promise one brand new level, which was actually discovered while going through the original game's resources. The team have decided to finish it, and you will be able to check it out when the game launches in 2020 on PC, Xbox One, and PS4. 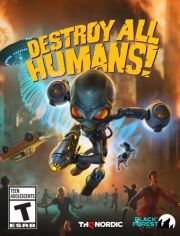