After Square Enix showed off plenty of footage for Final Fantasy VII Remake during their E3 2019 video presentation, I found myself chatting with my friends about what exactly the remake meant for the series, aside from a graphical upgrade. How did the game maintain the spirit of the original while setting itself apart? Remakes are pretty common in film and music, but thus far video games have been more like books - issuing reprints of previous work with some additional material rather than re-creating something from scratch. Resident Evil 2 (2019) showed how effective remaking a video game can be. Capcom's return to the zombie classic felt like a new game with modern mechanics, a photo-real aesthetic, and narrative tinkering. Yet, it also was close enough to the original game, keeping the broad strokes of the story with familiar characters and setting. 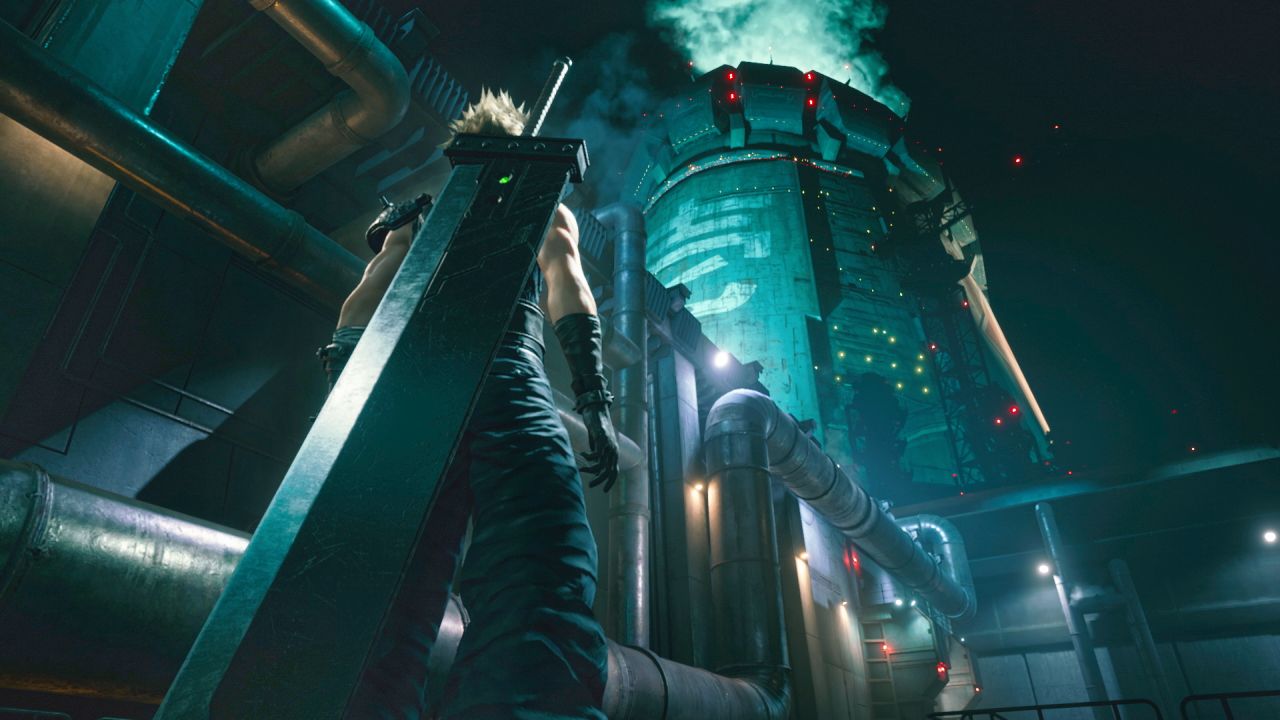 Capcom's concept seems to very much mirror what Square Enix is trying to do with Final Fantasy VII - keeping similar characters and story beats, but changing up the way the game looks and how it plays. After my hands-on time with the Remake, consider me a believer. We'll have to see how the game plays out in the long run, but the brief taste I got with the combat made me eager to see more - though I do worry about the game's pacing.

The demo for Final Fantasy VII Remake wasn't overly long. Set during the raid against Mako Reactor 01, one has to assume it was near the beginning of the story - but the time spent with the game was still telling. Moving around the world felt good; it reminded me a lot of how Final Fantasy XV handled, and the structure of the level was like some of the latter stages of the XV, very linear. Still, it was easy to run around the catwalks of the reactor, quickly dropping down ladders and exploring the small areas to try and find any extra materials.

Most of my time with the demo was focused around combat. At first, there were a few skirmishes with guards. I have to admit that I was a little intimidated by the combat controls at first. Not that the button layout is overly complicated, but I wondered how easy it would be to understand the flow.

You begin combat by using a standard attack. For Cloud, this meant just swinging his oversized sword and for my companion, Barret, it meant firing his machine gun arm. These standard attacks don't do too much damage, but they build your ATB. Once you've filled one ATB meter (both Cloud and Barret had two sections to their meter), you can use a spell, item, or ability that will do significantly more damage than your standard attack. You use these abilities by pressing the "X" button on the PS4 controller to slow time, allowing you to consider what you want to use and how to use it. 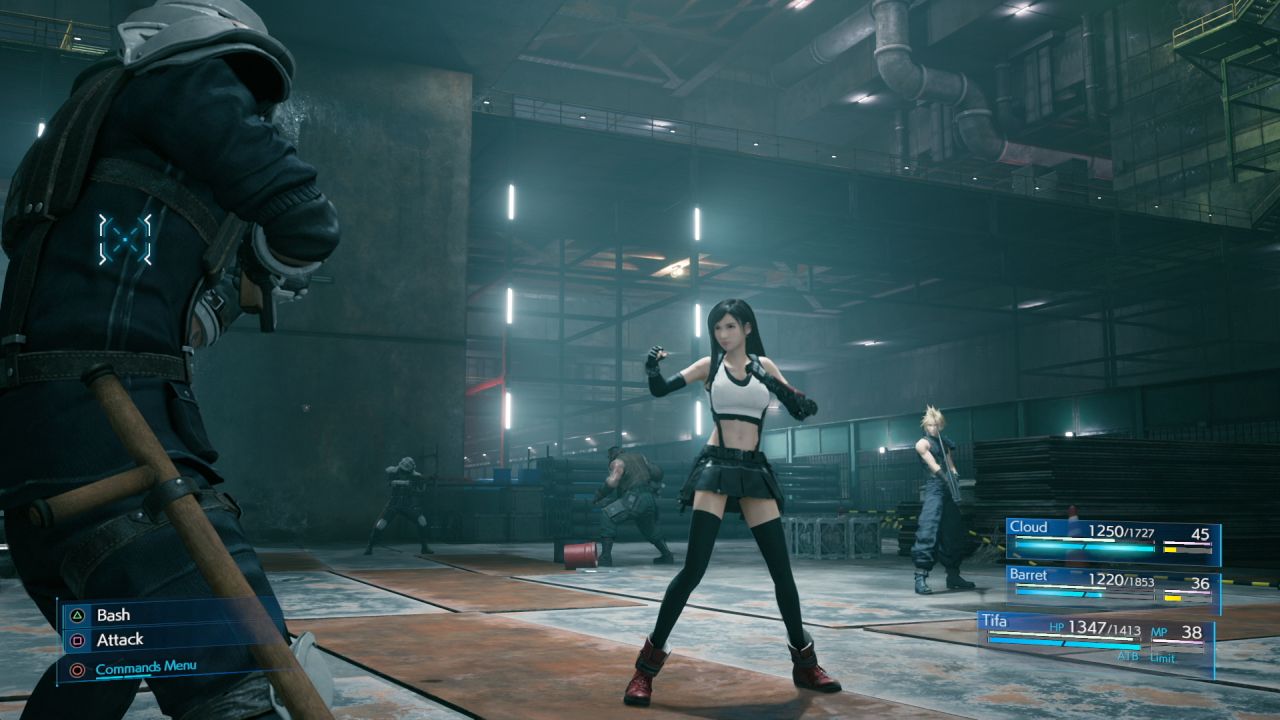 It's actually a pretty good solution for the timing-based tactics that were used in the original game, and I'm happy to say that it didn't take me long to get in the groove. The fights with the guards at the beginning of the demo were easy and I truly felt powerful, watching Cloud slice and dice his way through enemies.

The demo looked just excellent. If you're reading this preview, you've probably already watched the trailers and what I saw at E3 looked in step with what's been shown publicly. Midgar is a steely grey industrial complex, but nicely detailed. Cloud and Barret both looked great in action and watching them use their abilities had some nice visual flair.

The Remake also seems to remain faithful to the characters as they were portrayed in the original game. After fighting through to a large platform, Barret talked to Cloud about how they're about to complete the job, appealing to Cloud's better nature. Cloud quipped back in his anti-hero fashion that he's just here to get paid. Barret, obviously hurt, tells Cloud to earn his pay then, and finish the job. As they converse, a mechanical scorpion-like machine drops in on Barret and Cloud, and I play through a boss battle.

Filling the ATB meter through attacks unleashes more powerful attacks, but the most powerful strikes come from taking damage and filling your limit meter. It's not something that is likely going to be used in your average encounter, but I used it a few times during the boss fight. 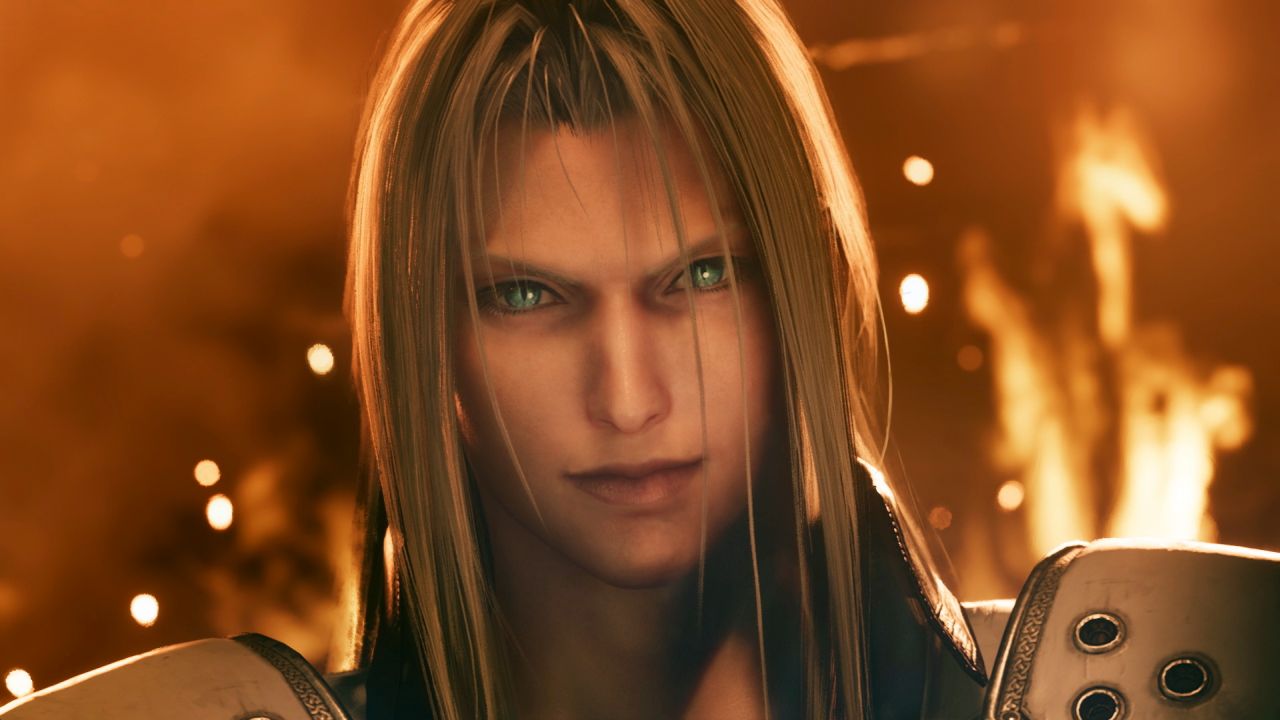 The boss encounter was a bit on the long side for my tastes. It was broken into three stages and was really just a matter of building up my meters in order to do real damage. It did create a nice flow as I would jump between Barret and Cloud, using their charges and considering what abilities were needed for each situation. For instance, should I hold off on attacking with Cloud and instead heal up? Is there a specific kind of magic I should be using to damage the boss? These are the kind of questions that have been the key to previous Final Fantasy games and this new combat system does a good job of keeping that spirit in the mechanics.

After beating the giant, mechanized boss, the demo ended. The game felt and looked great, so I'm definitely excited to see how the rest of it shapes up. I am equally interested to see how the pacing goes, how much of the game is purely combat, how much is the story, and how much is exploration. The expectations for Final Fantasy VII Remake are obviously high, and I'd hate to raise them further for no reason, so let me say that however much excited you are right now, just maintain that same level. After all, we now have a finish line to look forward to - Final Fantasy VII Remake launches March 3rd, 2020 on the PlayStation 4.