Mafia II comes off stronger than its predecessor and works hard to differentiate itself further from the open world king, Grand Theft Auto

One of the last games I got a chance to play at PAX East was 2K Games’ Mafia II. This sequel to the 2002 open world game Mafia differentiates itself further from genre standards than its predecessor and moves a few decades into the future. The game chronicles the life of a World War II veteran returning to America and joining a crime family over the course of several years, specifically 1945 to 1955.
In my demo, I got to play through several different missions and spend some times traveling the streets and getting a feel for the world of Mafia II. I spent the beginning of my time in the game world pressing different buttons while standing in the back of a pickup truck in order to hand different color-coded cartons of cigarettes to people coming to buy them from my character and his mobster partner in a parking lot. If it sounds pretty lame, you will not be pleased to know that it was. It was very boring and very lame, and it was one of the worst first missions you could sit a group of journalists and other media members down in front of to play. Luckily, the rest of the available game area and missions were considerably more creative and more exciting. 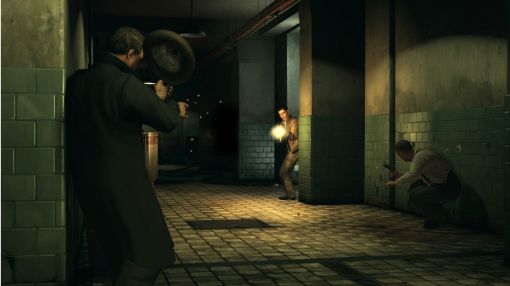 I was soon relieved of my duty as cigarette salesman and allowed to go full gangster. While handing out cigarettes, my characters as well as his partner, a man a bit further inside the organization, were accosted by a group of rival gangsters in a muscle car. After taking a few shots at one another, the rival gangsters took off. I attempted to pursue them.
One of the primary differences between Mafia II and similar games like Grand Theft Auto IV is the fact that Mafia seems to be striving for a strong sense of realism and this first made its appearance to me while behind the wheel of a car.
The 1940s car I was driving didn’t go from 0 to 60 in 4.2 seconds and most certainly didn’t control like a dream. It was better than that. It felt realistic and it felt right, even though I’ve never driven a car from anywhere close to that time period. Due to this, I didn’t catch the gangsters making their escape in a clearly better vehicle. Luckily, the developers had planned out this likelihood. I didn’t have to restart the mission and try again. The story simply corrected itself, and I was directed to travel to a nearby payphone in order to contact the boss, informing him of the attack.
12Next

Our Review of Mafia 2
84%
Great
Reviewed on PC
"Despite it being deceptively linear, Mafia II is a great story-driven shooter that retains, for the most part, both the feel and quality of the original"
Game Ranking
Mafia 2 (PC) is ranked #210 out of 1788 total reviewed games. It is ranked #22 out of 107 games reviewed in 2010.
209. Jedi Knight II: Jedi Outcast
PC
210. Mafia 2