Tinkering with the dial

The concept of a time loop is fairly novel, and one that takes skill and nuance to execute well. Video games always seem better suited to deliver on this concept, being an interactive medium, compared to films or books. Alt-Frequencies, an audio mystery game from developers Accidental Queens, tries to not only include this element into their story, but also offer it through a unique presentation. 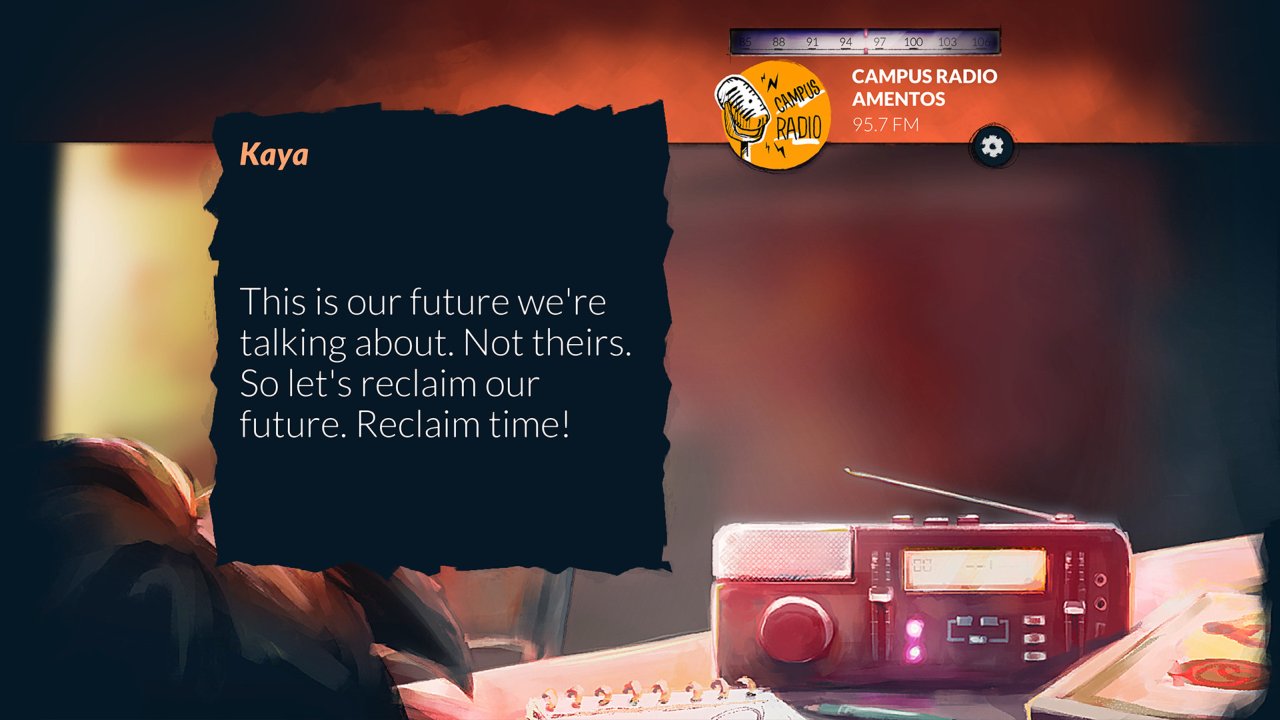 Alt-Frequencies is a puzzle game with a fairly novel premise. Players have access to a single radio, and can adjust the stations on it. The stations are a typical selection - a news channel, a college activist channel, a music/DJ channel, a talk show channel, and so on. Everyone is talking about an upcoming controversial public vote on something called the time loop - a seemingly sci-fi concept that would possibly allow the government to control time. But there is an underground resistance - led by a man named Winston - that is trying to uncover the truth behind the proposal, and it is up to the player to find all of the group's frequencies and messages, uncover the conspiracy, spread the word to other radio stations, and potentially stop a disaster.

The way the gameplay works is rather straightforward, despite the unique design of browsing radio stations. The game is split into chapters, and during each chapter the radio stations are on a loop of an audio segment. It could be a news segment, an interview, or even a bunch of static with an important sound effect. Players can listen through these radio segments as many times as they need because they start over once you get to the end. The key to the gameplay is that you can interact with these audio segments by recording and then playing back moments of the conversation. Most sentences are presented as a standalone dialog box, so you know exactly when to record.

To start things off, you should listen to each radio segment on every station in each chapter. The segments are a few minutes long, and they can be fast-forwarded once you know what you need. The main puzzle aspect comes from finding the correct sentence, such as a question or a statement, and then playing it for the host of another radio station. All of the radio stations open the door by saying they take questions. So the main riddle is to find the sentence you need, and send it to the right host. The hosts make it explicitly clear what they are looking for ("only send us yes/no questions about government", or "we want your questions that relate to lying", and so on). If you send the host an incorrect audio clip, they offer some remarks and then move on with the usual recording. 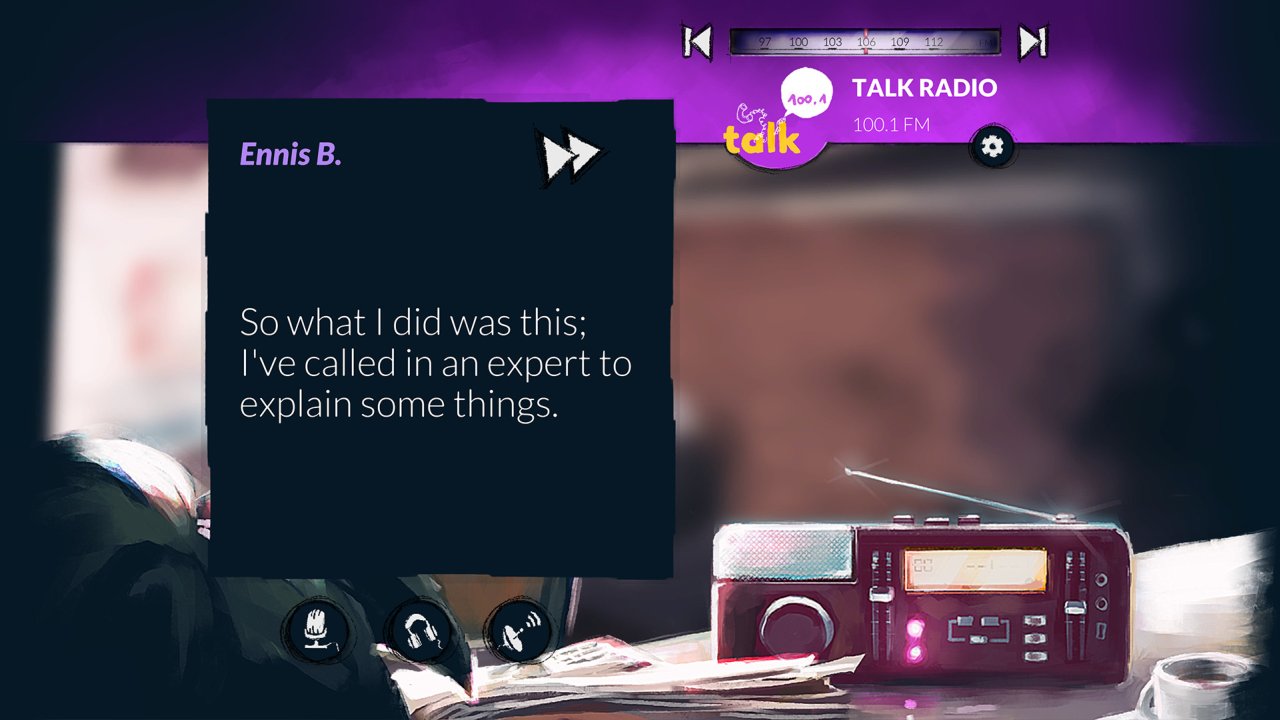 Once you've sent the correct clip, the audio loop of that station changes, and it can either progress the dialogue on other stations, or provide the clips you need to interact with the next host. As such, Alt-Frequencies switches things up by offering either a linear or multiple-clip approach to the puzzles in any given chapter. Still, the puzzles can be a bit obtuse and despite an easy start; the later chapters are not very clear about what clips need to be recorded and sent to which host. This will likely become your biggest stumbling point, as even with the game's hint system, it can simply become an exercise of trial and error. The repetitive process is made more cumbersome because all radio stations advance their dialogue at the same time whenever you're fast-forwarding, so you may have to loop forward and back over again to get the clip you need.

The game's plot, as intriguing as it may seem at first, wraps up very quickly. Given that the game can be completed in about an hour, there's really not much time to work with. Each chapter only offers perhaps 10 or so minutes of unique audio content, as the rest of the time is spent trying to grab and send the required audio clips. That means Winston and his team only have so much time to deliver their message and for subsequent events to play out, even if the radio loop can change mid-chapter. Despite the sci-fi element being seemingly at the core of the story, it offers no unique outcomes to the story that feels surprisingly mundane in the end. And once you realize that the underlying puzzle mechanics are a basic case of copy and pasting things into the correct place, the allure of the distinctive presentation fades quickly. It just lacks the atmosphere of something like Oxenfree and those radio-based mechanics.

The entire game takes place on a static screen with a radio, where your interactivity options are laid out with typical buttons to record, playback, and change radio frequencies. The heavy lifting is done by the audio design of course, with all radio clips seeming authentic and believable - for better or worse. There's the confrontational news host, the ignorant talk show host, and the naive music DJs. Despite the solid quality of the presentation, the voice acting does become grating as you're forced to listen to the same segments over and over to find the clues. 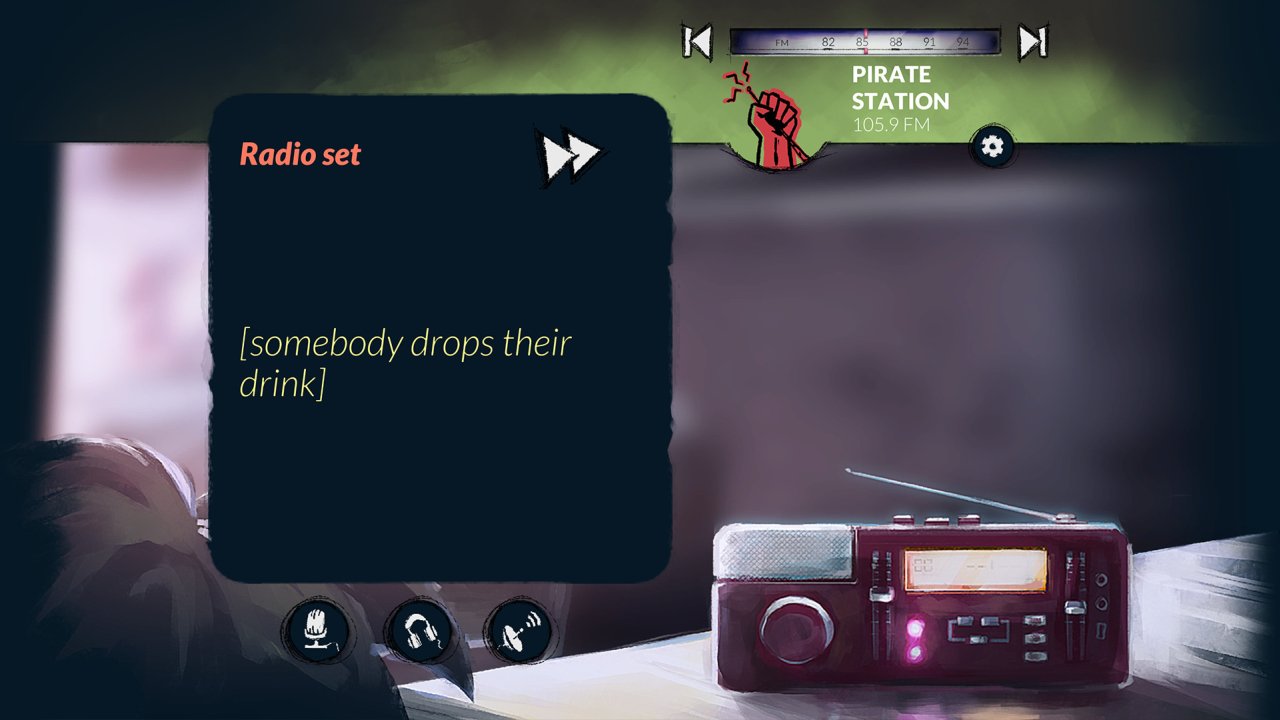 Alt-Frequencies is an engaging puzzler at first, with an interesting and well executed premise. But as you delve deeper into this audio adventure, you will find the puzzle elements to be basic and the difficulty of finding the correct clip becoming arbitrary. The story leaves much to be desired, despite the equally exciting initial hook. The simplicity perhaps comes from the fact that this is a mobile game as well, leaving it little room to breathe. The 60-or-so minute experience is slightly memorable due to its unique concept, and a fair price, but one can't help but think of the missed potential.

Our ratings for Alt-Frequencies on PC out of 100 (Ratings FAQ)
Presentation
70
The game's static screen and a few minor visual effects fulfill their purpose. The audio design and voice acting need to carry the game, and they do so.
Gameplay
50
Once you understand its inner-workings, the magic fades and you're left with trying to find the correct piece of the puzzle and slot it into the right place.
Single Player
60
Initially intriguing, the story ramps up and conculdes a bit too quickly. The radio DJs are believable, for better or worse.
Multiplayer
NR
None
Performance
(Show PC Specs)
CPU: Intel Core i5-4670K @ 3.80 GHz
GPU: ASUS Radeon RX 580 8GB
RAM: 16GB DDR3
OS: Windows 7 Professional 64-bit

95
No issues
Overall
62
Alt-Frequencies has a unique hook in its gameplay and story, with plenty of potential, but it skews towards being an all-too-brief mobile game rather than a full fledged adventure puzzle. 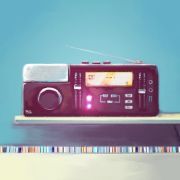