A grand strategy game that seems stuck in the past

I remember learning how to play Crusader Kings 2, the 2011 strategy game from Paradox Development Studio, and it felt like a herculean task. I watched hours of videos, trying to grasp all the ins and outs of how I could arrange assassinations, how I could fabricate claims to get a casus belli to justify a war, how I had to manipulate the many lords and ladies of the realm to ensure that they didn't step out of line and try to incite rebellion. There's a wonderful mix of personality and strategy in Paradox's strategy games; not only do you have to manage a spreadsheet worth of data to ensure that things run smoothly, but you also have to contend with the character of your ruler and their eccentricities. Especially in Crusader Kings 2, this is a tricky balance, yet an incredible experience. 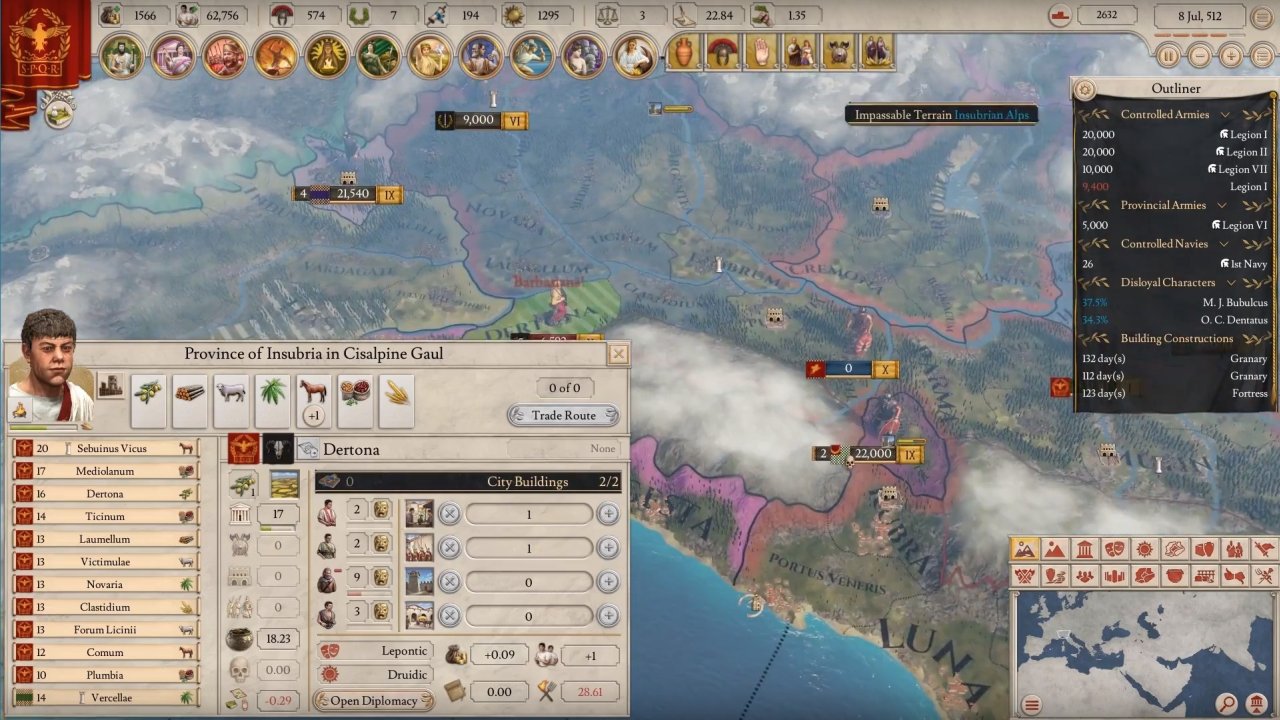 Since Crusader Kings 2, Paradox has released new entries in their other franchises, Europa Universalis and Hearts of Iron, and also released a new IP, Stellaris. The studio has become well known for making games where players spend hours upon hours manipulating the smallest details of their dominion, all to eke out a little extra coin and raise that much larger of an army or gain a little more political influence to rewrite history.

The roster of games Paradox have made over the last twenty years is impressive, and it's hard to measure Imperator: Rome against them - as those games now have a wealth of DLC and updates that have helped expand their content and mechanics over time. Still, even taking this into account, there is something missing from Imperator: Rome that keeps it from being a standout entry. It still has many of the complexities, but there are also limitations and restrictions that hold it back.

If you couldn't tell by the title, Imperator takes place during the antiquity, specifically at the time immediately following the death of Alexander the Great, whose divided dominion would set the table for a period of great empires, but none greater than the Roman Empire which would rule from the Mediterranean through Africa and all the way to the Hadrian Wall in Britannia. But those feats are still far in the future - assuming that's how you want history to play out.

Imperator: Rome is a complex game with many moving parts. It's also a game that wildly changes based on the territory you choose to play as. If you play as Egypt, you'll play as an emperor, who can make significant changes at their own leisure. If you play as Rome, you'll have to deal with politicians and a government that can block your power. Lastly, if you play as tribal peoples, you'll have to work with a council to approve of your decisions. 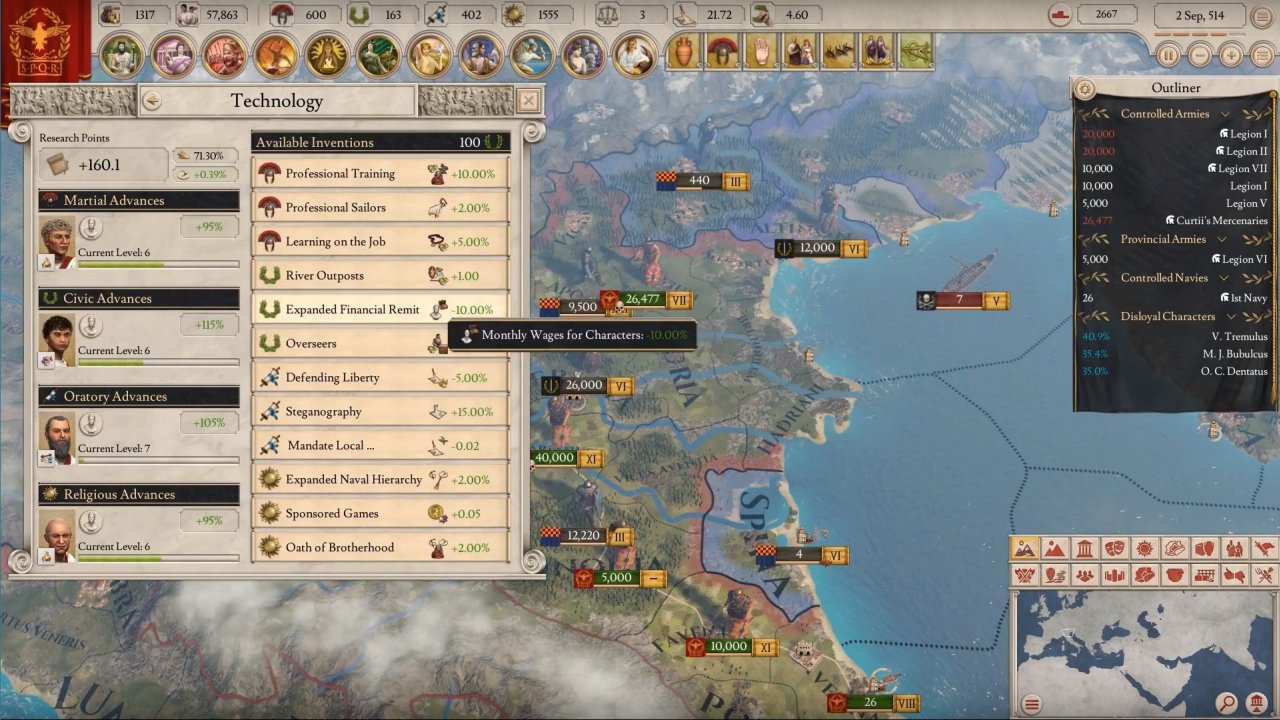 And that's just the tip of the iceberg. The most interesting thing about Paradox games is how each title has different motivations based on the time period in which it is set. Crusader Kings is about ensuring the continuation of your lineage, Europa Universalis is about exploration, and Imperator: Rome feels like it's largely about expanding the empire, and constantly pushing against your borders. Thus, military might and an economy to support it is a must. You can either import the necessary goods to build the units you need, ensuring that your population remains large enough, or you can hire mercenaries. Both kinds of armies come with their own disadvantages and perks. The armies you build organically will start loyal to your nation, though over time they'll develop loyalty to whatever general is in charge, but in the long run, they'll be easier to manage. You can split them, dismiss them quickly and train them in whatever units you need. Still, it takes years and a lot of resources to raise those armies. Mercenary armies are expensive and can't be dismissed until you can pay the lump sum they require, but when you have hordes of barbarians assaulting your cities, you'll likely bite the bullet and choose this quick fix. This is somewhat emblematic of the gameplay as a whole. Are you going to go for a quick solution that is costly or take your time and save your resources to use elsewhere?

Trade is another key aspect you're likely going to spend a lot of time mulling over. Each region on the map is going to have its own natural resources and a plethora of those resources will give that region bonuses. You'll have to manage what you're shipping out and what you're shipping in. Importing and exporting also come with their own benefits for your citizens, like improving your population output, and can help fill your coffers.

With trade and war come diplomatic relations, which is another series of tricky mechanics that you'll have to manipulate your advantage - managing both domestic and international affairs. You'll have to placate politicians, generals, and possible usurpers in your own territory, but also manage relations with other empires and trading nations. Sometimes this can be as simple as opening an embassy or winning over favor with the ruler of the nearby province - and different rulers will have different options in how you can interact with them. Lesser states might pay tribute to you or allow military access, while larger states will form alliances. 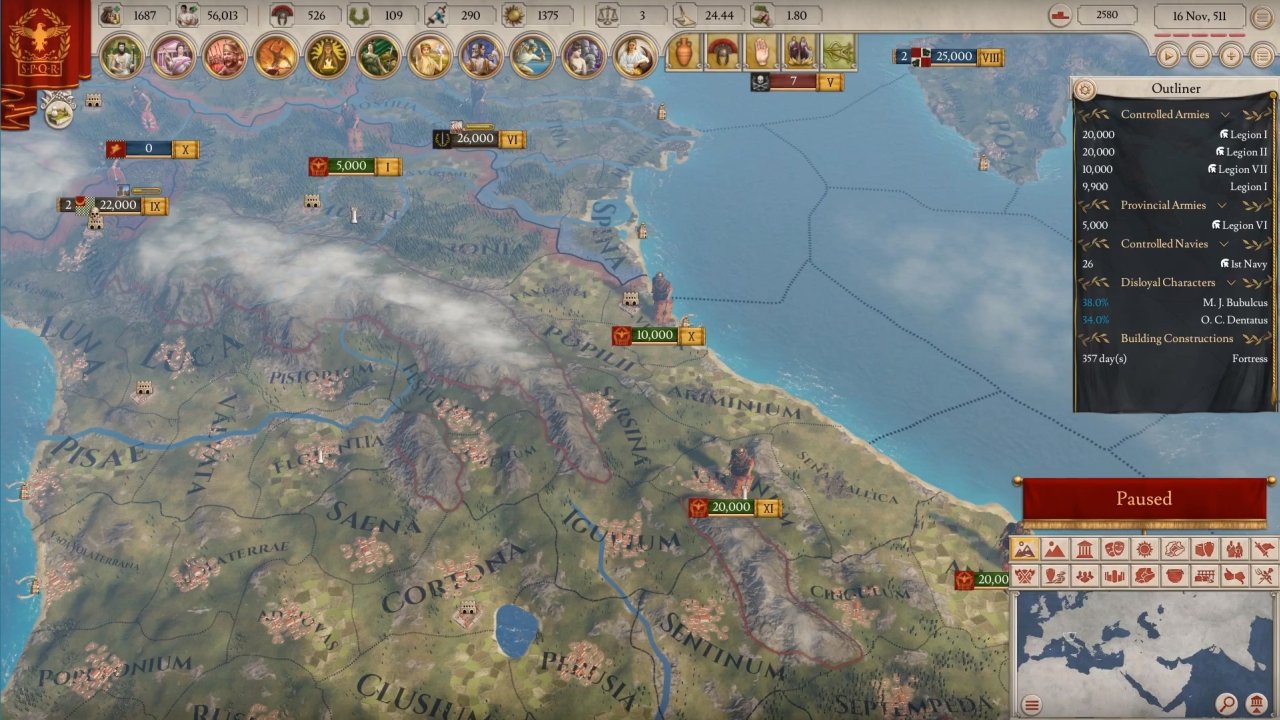 Further complicating these relations are the specific attributes of each character. Characters are going to have their own skills and weaknesses which will make them suited to different kinds of jobs within the government. Those with martial abilities should be made generals, those with diplomatic abilities should be governors, and those with piety should work within the temples. Further, you'll want to constantly track the loyalty of characters to see who might betray you or even simply kick the nest to incite a rebellion. Also, characters will usually be part of larger families, who will have their individual wealth that they will want increase by getting more positions of power. As you conquer more states and territories, they will have their own families that you'll have to decide what to do with: kill them or welcome into your fold?

There's so much to keep track of, that it can be difficult to find time to reflect on if any of it is even good. It's like an enormous buffet of mechanics, you're hardly worried about savoring any of it, because there's just so much to take in. Still, there is an art to the balancing act of managing strength, wealth, and trade - and when you get it right, it's quite rewarding. It's easy to sink countless hours into the goal of expanding your empire or even just trying to use your influence to manipulate another nation. It's almost more addicting than fun, but when you take a step back and see how you've expanded your territory or amassed your wealth, there's a feeling of accomplishment.

The game is presented in a fairly standard format - especially for Paradox's grand strategy games. The developer has never concerned themselves with adding much flair to the presentation - from the art to the music - so instead of focusing on the aesthetic, I think it's worth examining the layout and ease of use. And that's a rough spot with Imperator: Rome. Navigating through the menus can be frustrating and the whole layout of sub-menus and shortcuts doesn't feel intuitive. In fact, it can feel a little challenging to find what you're looking for. When you're already spending hours upon hours strategizing, you don't want to spend as much time trying to actually execute your plan.

The game ran fairly well. There were a few frame rate drops when auto-saving, but nothing that was too bad. I never had any crashes, and after one long loading screen at the beginning, I felt like it was a stable experience. That's important because Paradox is obviously hoping you're going to spend a handful of hours at a time zeroed in on the strategies and action playing out in front of you, and technical hiccups would definitely ruin the experience. 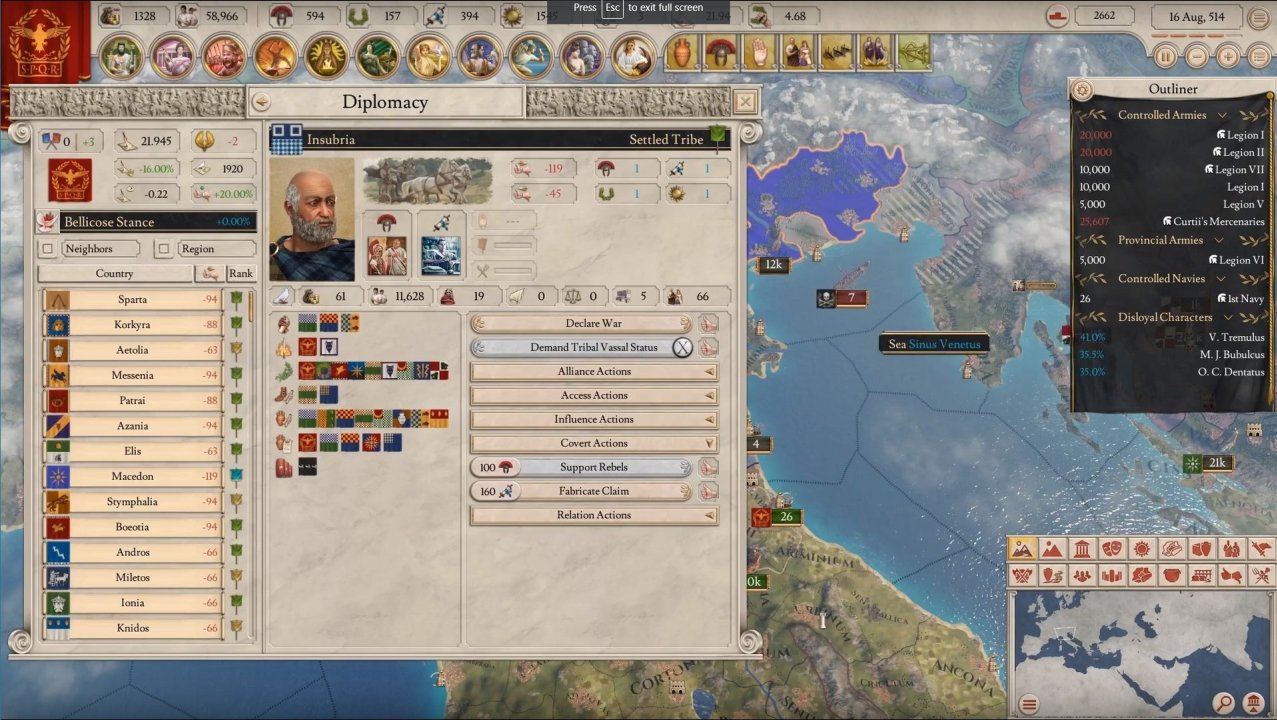 While I don't think that Imperator: Rome is as finely crafted as Paradox's other strategy games, I do think it's fun in its own right. It lacks a bit of focus, which is the result of a setting where one culture was so globally dominant, without a universal style of gameplay that is as fun for other nations available. It also isn't quite a cleanly designed as one would hope, meaning you'll spend a little too much time buried in menus. But it does adhere to the core formula that has made all of Paradox's strategy games so engaging. Hopefully, with time and the inevitable wealth of the DLC, Imperator: Rome can become a more polished and refined experience.

Our ratings for Imperator: Rome on PC out of 100 (Ratings FAQ)
Presentation
68
Imperator: Rome lacks some polish in its UI, which can lead to a frustrating experience at times.
Gameplay
75
There are so many mechanics, it can be hard to keep them straight, but overall, it flows well.
Single Player
80
When in you're in the throes of the game, it can be hard to know if you're even having fun, but once you step back and take it all in, you can't help be get a sense of accomplishment.
Multiplayer
NR
None
Performance
(Show PC Specs)
CPU: Intel Core i5-3570K
GPU: Nvidia GeForce GTX 660
RAM: 8GB
OS: Windows 10 Home

75
There some long loading screens, but it largely is smooth, which is necessary to help you enjoy the experience.
Overall
75
Imperator: Rome has some rough edges and it's not quite up to par with the excellent games Paradox usually churns out, but at the same time, it is still a challenging and rewarding experience that's bound to keep you engaged for long stretches. 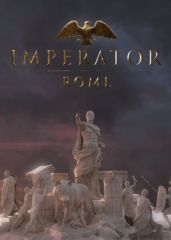