No Pitt, No Problem

The World War Z IP might be one of the most schizophrenic brands out there. The original novel is a grounded look at the devastation a zombie apocalypse would bring, while the big budget film is as mindlessly stupid as they come. While the Saber Interactive developed game has more in common with the movie, it still feels inspired by Max Brooks' book in some ways. Ultimately, what brings the three pillars of the franchise together, though, is the presence of the undead. 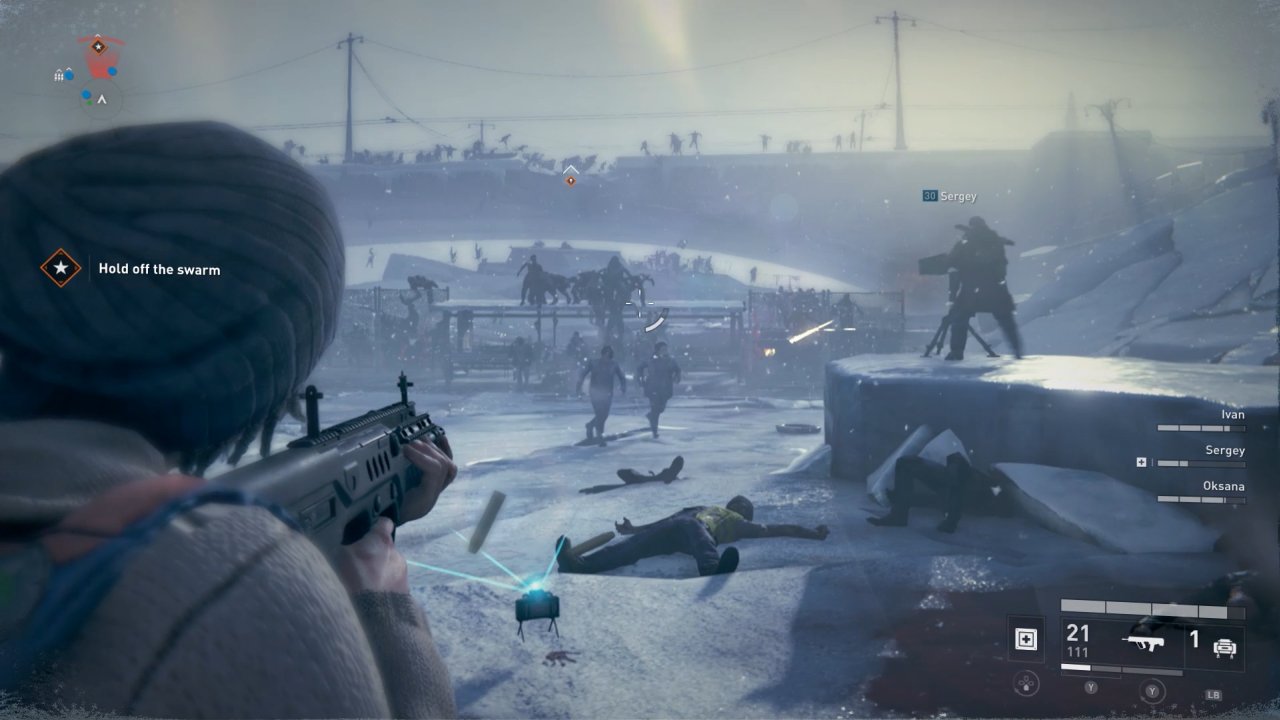 Picking up the torch from the dearly departed Left 4 Dead, World War Z is a co-operative zombie murder simulator. Taking place across four different countries, players are invited to partner up with either three friends, or A.I. companions, in order to make it out alive. Three of the four locales – Moscow, New York City and Jerusalem – are split into three chapters, while the fourth, Tokyo, only contains two for the moment. Each scenario features a different group of survivors, who all have their own unlockable backstories.

Despite the presence of survivor backstories, there's almost no narrative to be found in the game. Each chapter starts and ends with generic cutscenes that could have featured any member of the cast. There's little to no personality in these characters, so there's little for players to get invested in. Which is kind of a shame because the cutscenes that you unlock by beating a mission with a survivor hint at some interesting characterization. It's just that none of the traits or tendencies depicted in these scenes matter in the grand scheme of things. It's background trimming. It would have been nice if the relationship dynamics between each team was further played up over the course of the mission.

While the lack of a true narrative is disappointing, the action helps make up for it. Each of the four locales have their own different flow and objectives. Jerusalem has you protecting an important doctor, while Moscow tasks you with releasing a powerful chemical weapon. Despite the different main goals for each one, the missions do end up following similar beats. The same rotating batch of smaller objectives pop up in each city. Searching corpses for keycards or protecting another group of survivors while they work on a task are frequent challenges. It can feel a little repetitive. 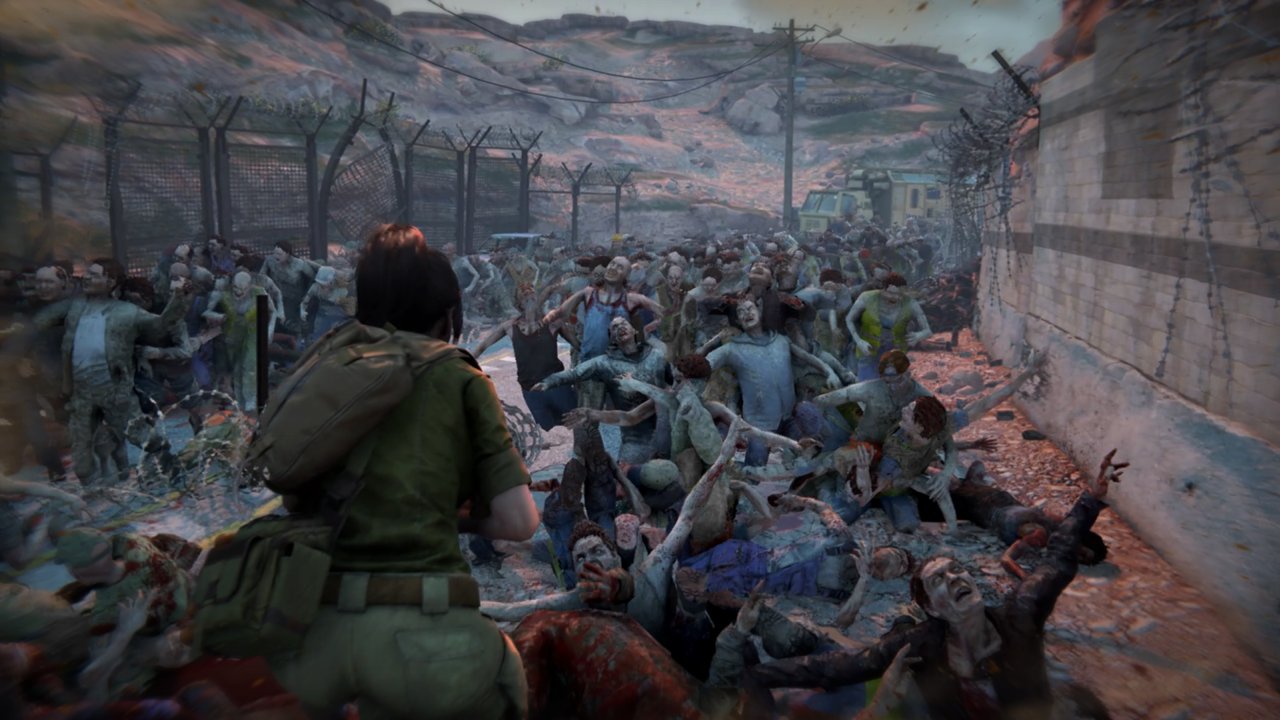 For as repetitive as the mission design can feel at times, the gameplay itself remains fun throughout. It's essentially a no-frills third-person shooter. As you make your way through each city, you'll slaughter hundreds upon hundreds of zombies. Most of them are typical zeds, but there are a handful of higher-class ones roaming around. Screamers draw additional enemies, while a gasbag releases poisonous gas if you don't kill it with a headshot. Alone, these specials are frustrating enough to deal with. However, when they arrive as part of a swarm, that's when they are truly frightening.

The horrific highs of World War Z are reached whenever you encounter a swarm of zombies. The Swarm Engine created for the game is an incredibly impressive piece of tech. Hundreds of undead descend upon a group at once, coming in a pattern that looks like a terrifying wave of death. As you desperately work to deplete the horde, it's hard not to stop and marvel at what you're seeing. It's awe-inspiring in the dread it can instill in you. Like in the film, though, the wave won't stop until it reaches you, so you can't spend too much time gawking.

At the start of each chapter, players can choose from one of six different classes. Each class has their own unique skills. The slasher gets a bonus for using their machete more often, while the medic is better equipped to heal the rest of the team. As you complete chapters, you'll level up these classes and unlock additional perks. Individual weapons can be leveled up the more you use them as well, so it helps to always be on the lookout for different guns during each mission. The more time you spend in the game, the better equipped you'll be to handle the higher difficulties. 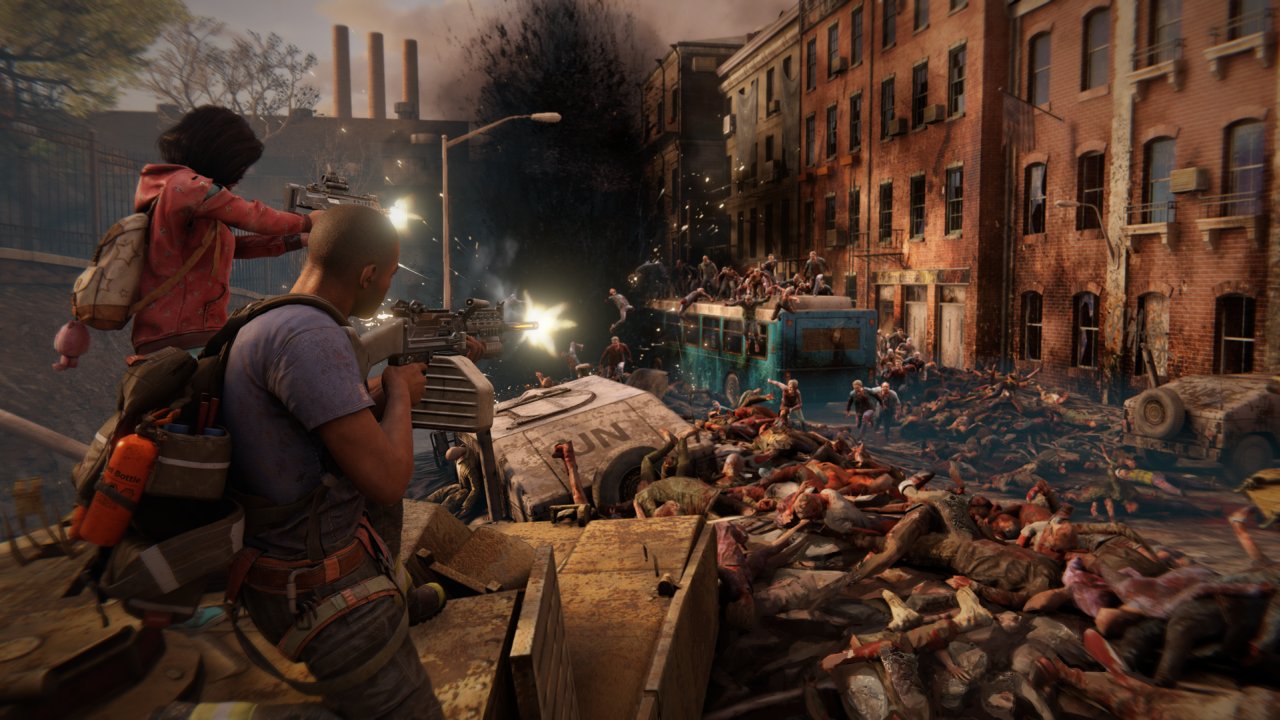 The progression system of World War Z is one that sounds nice in theory but is kind of a pain in practice. The issue that pops up is that when you do gain access to a new skill, you can't just equip it right away. You must purchase it with in-game currency earned by playing through a mission. The same situation applies to weapon upgrades. In order to create the class that best suits your playstyle, you're going to have to repeatedly grind through missions. This just furthers the feeling of repetition that arises when you are forced to clear the same objectives over and over again. It's a system that drags more than it really should.

When you need a break from the PvE mode, World War Z also offers up a PvPvZ option. Utilizing the traditional suite of team modes (deathmatch, king of the hill), two opposing teams face-off with the threat of zombie hordes also coming into play. The addition of an A.I. threat helps ratchet up the intensity on what is an otherwise bland slate of modes. They all function as intended, and there's nothing inherently bad about them either. It's just that there's little new to them outside of the swarm of zombies that interrupt the action.

As a title that is reliant on being online, World War Z has a fair share of technical issues. When I was in-game, I didn't encounter too many issues. The most prominent was enemies getting stuck in objects they shouldn't have, which seems like maybe a byproduct of the Swarm Engine throwing so many at you at once. There was some stuttering, but nothing too bad, at least on the Xbox One. It's outside of the action, where I ran into more problems. Trouble finding partners online, music stuttering during the customization screen, and the title locking up during the post-match reward screens were my most frequent problems. Saber Interactive has been proactive in hammering out issues so far, so I expect things to improve. For now, though, be aware of these issues if you intend to hop on. 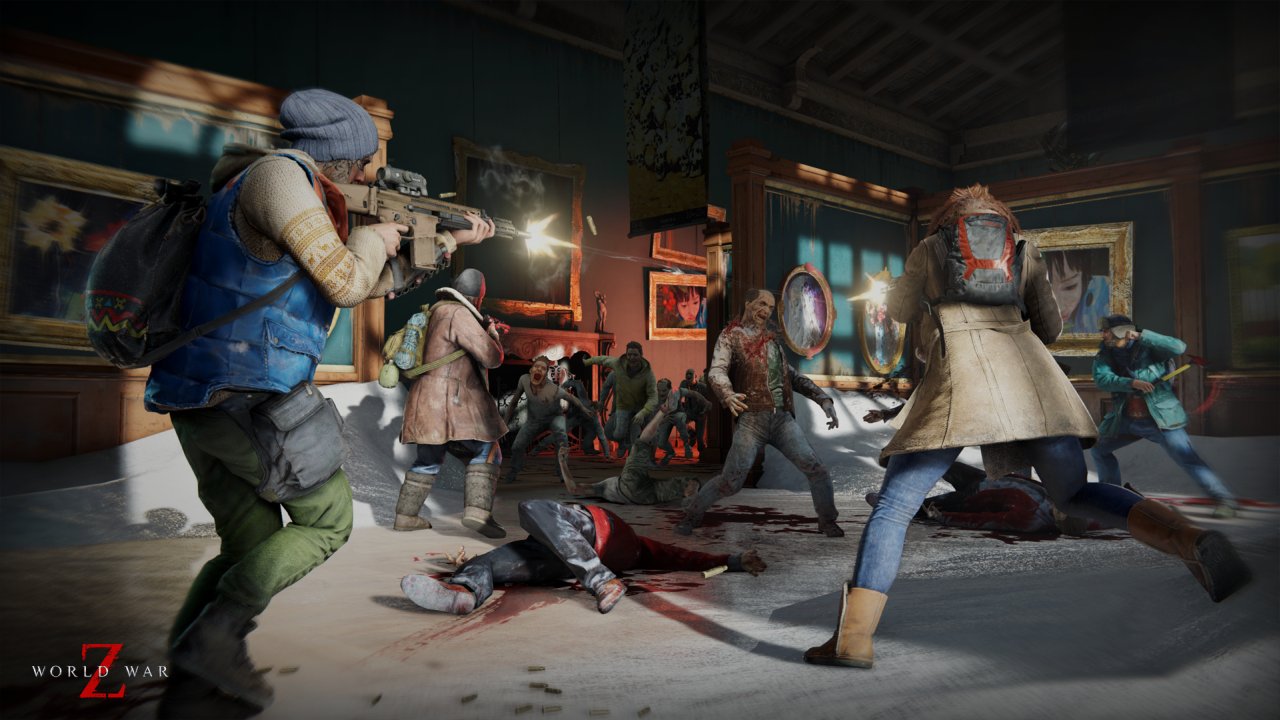 For what is ostensibly a budget-priced effort, I was caught off-guard by how nice World War Z looks. Each of the four mission locations manage to look completely different from one another. The ravaged New York City drives home the damage such an event would cause, while the harsh conditions of Moscow add a unique flavor to the action. The designs for the survivors are great as well, which again, makes me sad there wasn't additional personality given to them. And I've already touched upon how menacing a swarm of zombies can look as it races towards you.

Much like the film it occasionally draws from, World War Z brings little new to the table. Anything you'll see here, you've likely seen in another title before. However, unlike the Brad Pitt flick, Saber Interactive's effort is still a blast to partake in. Provided you have a solid team around you, the co-op action is incredibly fun, even if it can drag at times. And while the PvPvZ modes may not be the most original offerings, they're still worth checking out. The game may be lacking in originality, but its familiar thrills are charming enough.

Our ratings for World War Z on Xbox One out of 100 (Ratings FAQ)
Presentation
74
The Swarm Engine is the highlight of what is a surprisingly solid presentation. The wave of the undead it builds inspires both dread and awe. These moments are complimented by solid level and character designs. Soundtrack and voice acting are nothing to write home about, however.
Gameplay
70
The shooting mechanics are perfectly competent but offer nothing new for fans of the genre. A frustrating progression system makes outfitting character classes a bit of a drag to handle, however.
Single Player
40
Although clearly designed for multiplayer, you can run through World War Z with just A.I. companions. However, your computer allies are nowhere near helpful enough to make such an endeavor worth undertaking. The lack of any kind of story is also a disappointment.
Multiplayer
75
Even in the face of repetitive mission structure, World War Z remains a blast to play online. If you have a solid group alongside, you're in for a good time. Even the PvPvZ modes, which probably could have used more attention, are worth checking in with.
Performance
58
While the action holds up surprisingly well in-game, World War Z is not without issue. Servers seem to be the biggest culprit so far, but there are plenty of other performance hiccups currently causing havoc.
Overall
65
Outside of the excellent co-op play, World War Z is a mixed bag of issues. With no story to get invested in, the progression system is a total drag and there's little here you haven't seen done better before. However, as long as you have friends willing to join in, this shooter can be an intensely enjoyable time.