At once mesmerizing and mundane

Perhaps one of the most underappreciated aspects in video games is exceptional level design. Solid mechanics, great writing, and a beautiful aesthetic are something that you’re always going to appreciate, but coming up with a cohesive flow and well-timed pacing are so important - and often unremarked upon. It’s one of those things that, when done right, is almost invisible because it’s designed to be seamless. 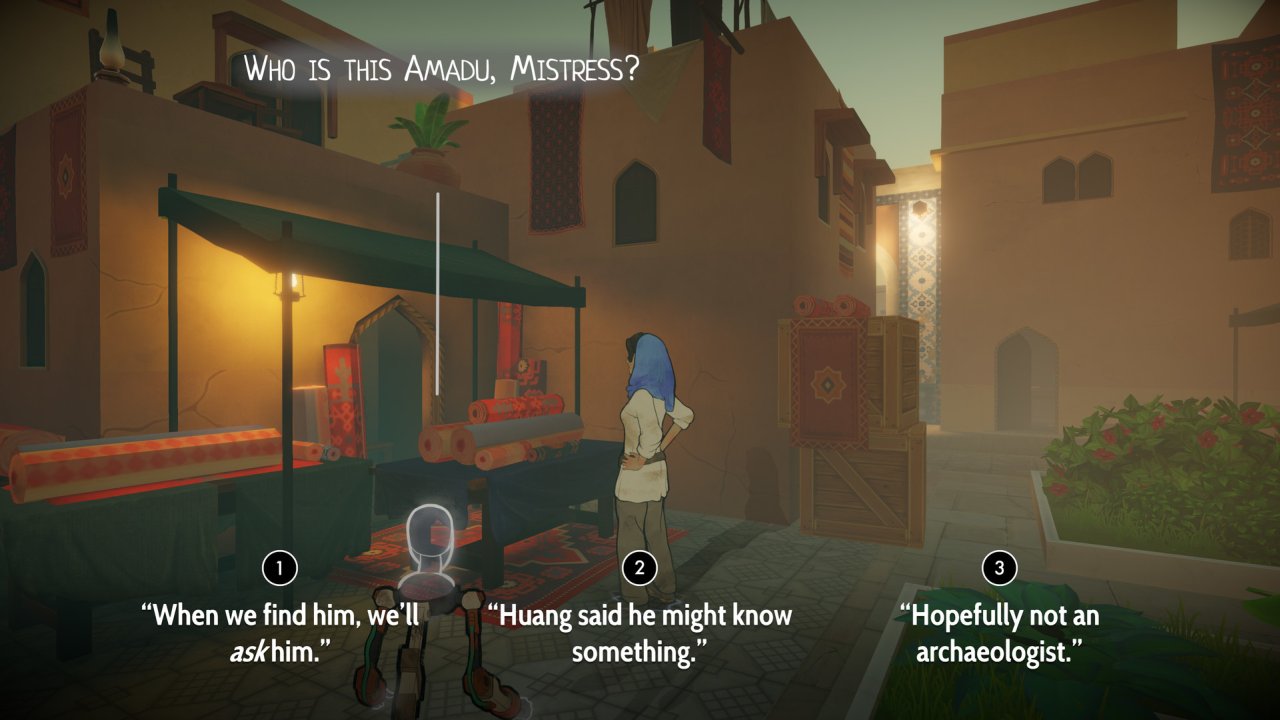 The importance of level design stuck out to me when playing Inkle Studio’s new release, Heaven’s Vault, because it’s the biggest flaw in the game and it’s a brutal one. There are so many creative and wonderful things stuffed into Heaven’s Vault that within the opening minutes, I was positive I would adore the game. The writing is sharp and fun, the characters are smart and creative, the core gameplay centered around reading ancient texts and slowly learning a forgotten language is engaging and challenging. Yet, while the peaks of Heaven’s Vault are high (no pun intended), there’s so much downtime in between them that the experience is constantly weighed down with busywork that just couldn’t sustain my interest. What’s worse is that the deeper I got into the game, the longer and more intrusive I found that downtime to be. At times, Heaven’s Vault had me positively smitten, but all too often that feeling would fade away and I was left with a frustrating game that continued to underdeliver.

You play as Aliya, a freelancing treasure hunter who has been summoned by the leader of the University of Iox. Having adopted Aliya from a dingy crime-ridden moon, the leader of the University has formed a maternal bond with Aliya and asks her to track down a missing member of the Ioxian faculty who disappeared while looking for an ancient ruin. Aliya agrees to help and begins investigating. However, while tracking down the professor, she begins to uncover an ancient prophecy that may doom the world and that locating the titular vault is the only way to stop it.

That’s a pretty great set-up and the world-building is even better. Heaven’s Vault takes place in a cluster of moons that are connected through rivers. Aliya uses a spaceship/sailboat hybrid to traverse these rivers and visit the multiple moons. The semi-space travel and teleportation used in the game is very sci-fi, but the Middle Eastern aesthetic gives everything an ancient vibe. The game is able to riff off of marketplaces and villages that wouldn’t look out of place in Indiana Jones, Tomb Raider, or Uncharted, but also is able to put their own spin on the world by dousing it with this space-travel/sci-fi flavor. It’s so cool, and it’s a concept that is truly singular. 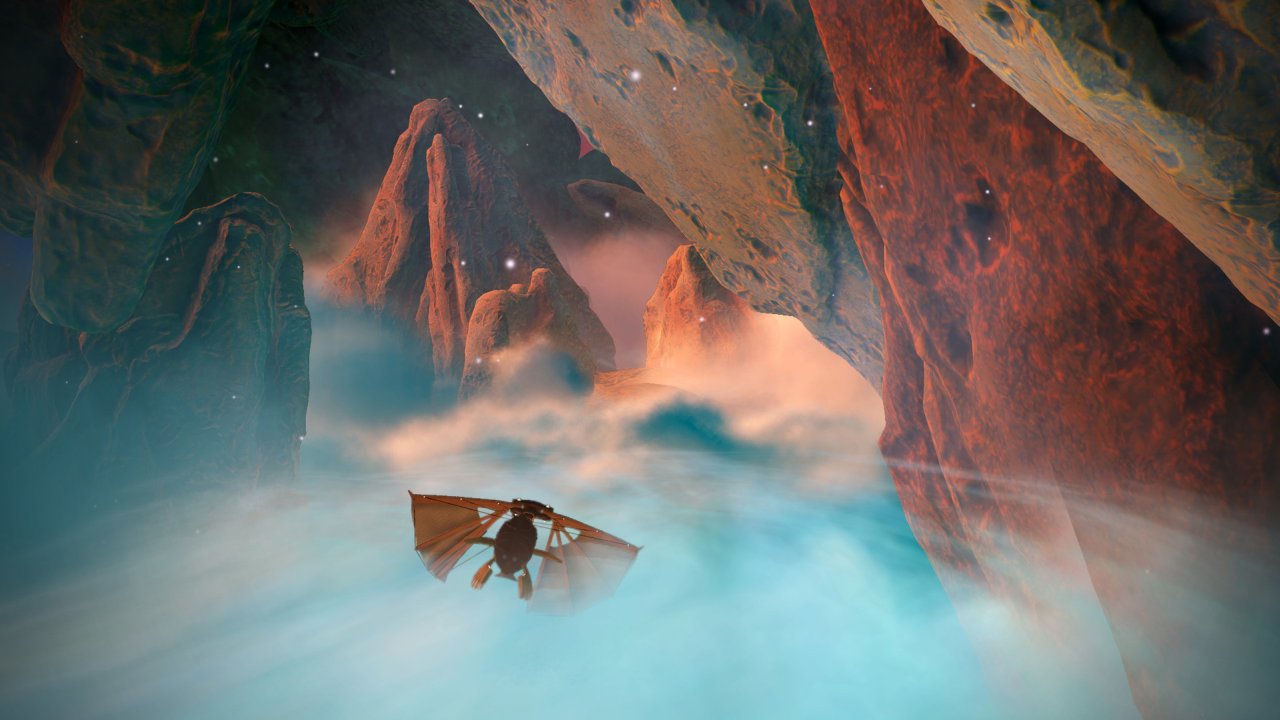 However, the pacing issues that I will continue to revisit through this review plague the narrative. After discovering the fate of the professor, the game quickly loses track of the plot and while there’s a goal hovering off in the distance (the titular vault that will save the world), the missions in-between rarely seem to get the player any closer to that final destination. Heaven’s Vault is an open-world game with a branching narrative, filled with dialogue choices. That’s really cool, but because you can visit so many ruins and find so many treasures in various order, the game kind of treats all of them the same, so you never have a sense of progression. Ten hours into the game I was having trouble keeping all of the sites and ruins straight, and remembering why we were traveling there and what we were hoping to find.

The dialogue is quite fun. Aliya is accompanied by a robot companion named Six, who is a great foil for her adventurous attitude. Six is more C-3PO than he is R2-D2, cautious and stuffy, so Aliya’s spirit clashes with him often. The dialogue choices give you a spectrum of how rebellious or well-behaved Aliya is, but the need to push deeper into the ruins will likely lead you to play things fast and loose, which just makes for a more fun dynamic between the main characters. You can also find characters in the game who will ask to temporarily travel with you to a new home - these characters are also fun and memorable.

The gameplay is a mixed bag, the highlight of which is the puzzle aspect where players discover ancient text and attempt to learn it through repetition. This is done by finding inscriptions, written phrases, and other text, then guessing the symbols based on similar words. The next time you find a piece of text with the same word, Aliya will either confirm that it’s the right word or tell you that it’s wrong and give you new choices to guess from. So basically, the trick is to try and locate as much text as you can, keep guessing, and slowly watch as she pieces it all together to understand the language.

Sometimes, when finding new text, you will have to take words and phrases you’ve already learned and see if they match the text you have. For instance, you might find some text with a word that looks like “Beginning”, a word you already know. So you’ll guess that part of the phrase is “beginning”, however, the word might actually be “end” or “start” or something looks similar to “beginning”, but is slightly different. There’s a lot of trial and error, but it’s always fun to tease out phrases and slowly see your options grow the more you learn. 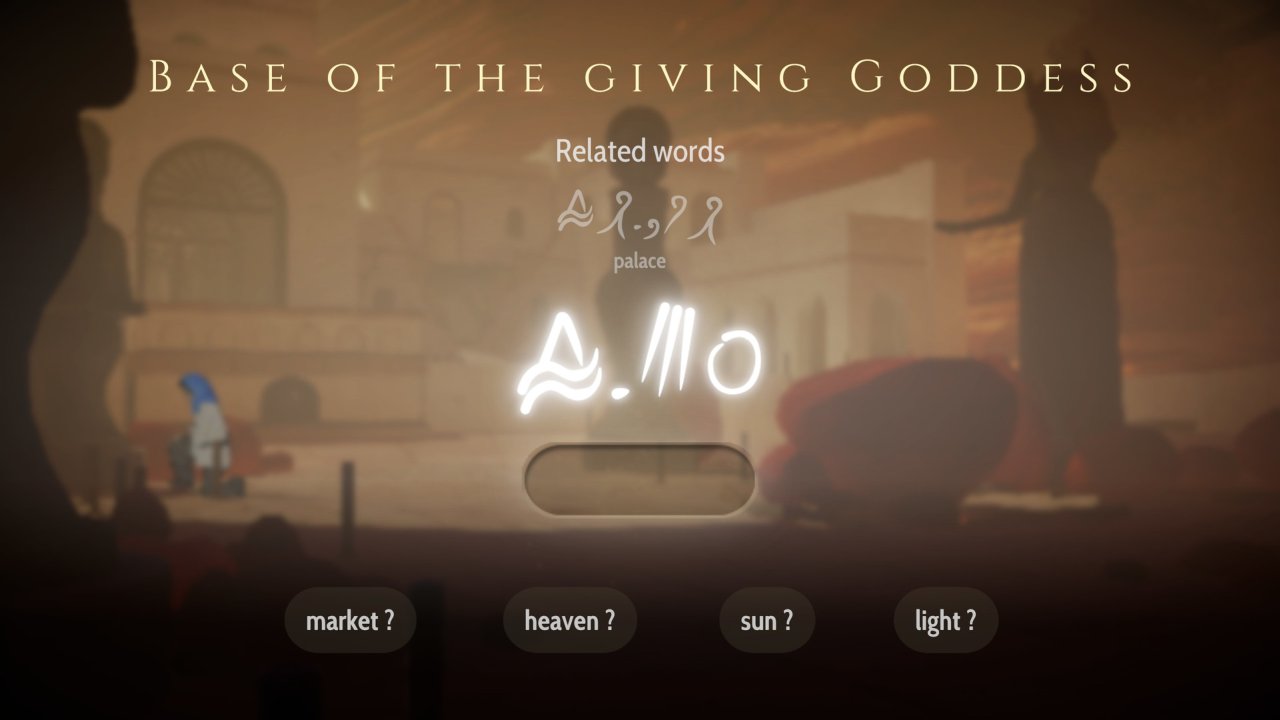 When you’re not interpreting text, you’ll be exploring the world looking for people to talk to and things to interact with. There are some very light traditional puzzles, but nothing too intense. Mostly, you’ll just be finding ancient artifacts to collect with text on them. Once you’ve found the artifacts you can take them back to the university where they will be stored for safe-keeping or to a trader on your homeworld. Both options have benefits and give you more text to learn. However, the dialogue trees that are used to fulfill these transactions are long-winded and take up too much time. If you donate a piece to the University, the librarian will leave the library, meaning that you can’t donate more pieces or review more text without having to leave the area and come back.

The traversal of the world leaves much to be desired. Simply wandering around environments is okay, it's easy to get stuck on the terrain but it’s not awful; the real issue is the sailing mechanic. While initially beautiful, these sailing sequences take far too long. There is an option to fast travel, but it isn’t obvious and sometimes I found I couldn’t do it. Besides, the worst is when you’re in your ship looking for ancient ruins (places you can’t fast travel to). Your ship slows down considerably as you’re forced to travel different waterways looking for the ruins you’re supposed to find. Even with a bunch of artifacts to help narrow down my search, this process took nearly a half-hour one time. A huge problem is that the dialogue seemed to get out of sync, so Six might tell you to take the wrong turn. If the travel sequences were limited, this might not be an issue, but you’re constantly backtracking to old locations and finding new ruins, so this is a significant portion of the game.

I do really like the aesthetic of Heaven’s Vault. I already touched on the motifs used, but the comic book-esque art style is a smart choice, lending some pulp to the game that feels right when you think about the roots of the treasure-hunting genre. While the whole thing might be a little too bright, each location is still unique and the moons you visit are designed well enough that I could always remember my way around. Again, it’s a unique vision and one that just feels right for the kind of story Inkle is trying to tell.

The audio is also solid. I felt like it was mixed a little loudly (I always had to turn down the volume when I booted the game up), but the score which leans heavily on the violin is gorgeous and haunting. Aliya is the only voiced character, through internal monologues, and it’s pretty good. Sometimes the accent feels a little faux-cockney, but the performance holds its own. 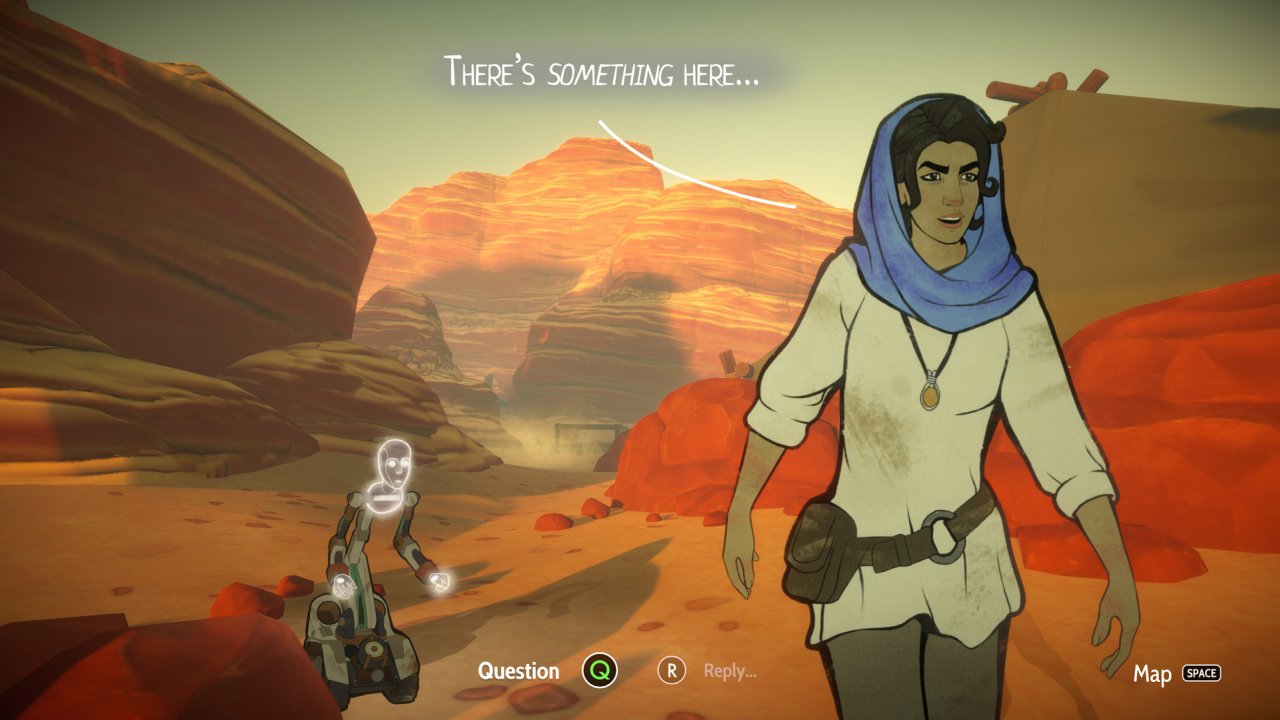 The game does have its share of technical woes, though. When I would take on passengers to the ship, the game always crashed as I try to set my next location to sail to. I saw updates coming fast and furious while I was working on my review, but the crashes never seemed to stop. They were intermittent enough that it was annoying more than anything, but when you have two crashes during the same sitting, it really impedes your ability to get into the game. There were also small issues; characters wouldn’t animate correctly during dialogue, the camera would get wonky during dialogue, instances where text would get cut off by the camera, and some long loading times. It’s rough around the edges.

Heaven’s Vault is a fascinating game and a smart one. There are so many creative and clever ideas here that the shortcomings pain me. Times spent translating languages or trading barbs with Six were a blast and I would feel myself getting swept up in Inkle’s adventure, but then I would get stuck trying to find a ruin or return to the artifact trader and sit through line after line of dialogue just to unload some of my haul. The game is in need to trimming and the 15-ish hour playtime certainly feels bloated. Heaven’s Vault is an ambitious game, but too many issues drag it down.

Our ratings for Heaven's Vault on PC out of 100 (Ratings FAQ)
Presentation
80
The hand-drawn aesthetic and the hauntingly beautiful score are a treat. Even the voiceover holds its own.
Gameplay
70
The majority of the time spent translating the ancient text and trading dialogue with Six is great. However, the chunk spent traversing the riverways between moons is rough.
Single Player
65
I just constantly felt like any momentum would get stalled by the narrative and returning to the same moons over and over to unload my artifacts. The pacing just kills this game.
Multiplayer
NR
None
Performance
(Show PC Specs)
CPU: Intel Core i5-3570K
GPU: Nvidia GeForce GTX 660
RAM: 8GB
OS: Windows 10 Home 64 bit

55
The crashes are really rough, but the strange animation glitches, text issue, and other tiny technical flaws really hurt.
Overall
68
At first it seems that Heaven’s Vault is an absolute treasure and you can just marvel at the creative ideas that Inkle Studio came up with. But in between all those moments when I loved the game, some of the gameplay mechanics made my eyes glaze over and the experience would lose its luster. 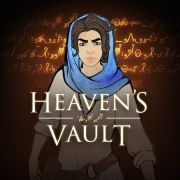