Yoshi gets the crafty collectathon he deserves

The sphere of video games aimed at children has become increasingly cluttered with overpriced plastic toys, flashy microtransaction emotes vying for adolescent attention, and mind-numbingly repetitive slogs through copy-and-paste LEGO games. Paradoxically, Yoshi's Crafted World feels fresh by being something more traditional: a 2.5D platformer with an emphasis on collecting all its hidden goodies. It's cutesy, creative, stuffed with content, and full of optional challenges to entertain and delight platforming perfectionists and first-timers alike. 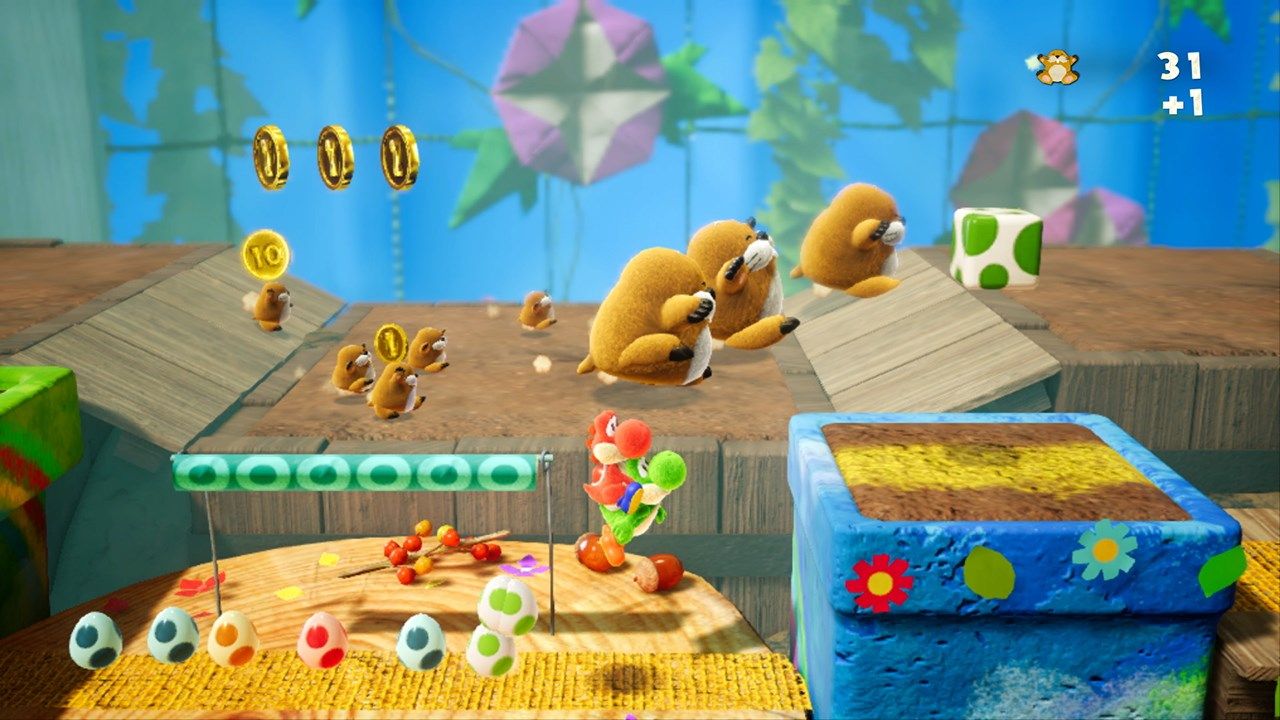 Yoshi's Crafted World utilizes a tried and tested platformer formula that still works wonders – especially when it's executed this well. You play as your choice of colored Yoshi and saunter through the sizable number of levels while collecting the hidden Smiley Flowers scattered throughout each one. The mechanics here are simple: you can jump, briefly flutter at the end of your leaps, swallow enemies to make eggs to toss, and ground pound into the floor. The modest mechanics allow you to quickly grasp the basics and get on to the fun part: collecting stuff.

Collectibles are the primary focus in this Yoshi installment, and crossing each one off your list is met with an inherent sense of satisfaction thanks to how well each one is hidden and how effectively everything is tracked. Your close attention and scrutiny is required to find concealed areas and to pick out things in the background that could use an egg hurled their way. When you're bopped out to the overworld map between stages, the excellent collectible menu lets you easily see what you've missed in each level, and you can teleport directly there with the press of a button, so backtracking is a breeze. You only need a small number of the Smiley Flowers to progress onward, but the pull to collect them all is so strong that you'll likely never find yourself lacking the number needed.

Attempting to collect everything in Yoshi's Crafted World is made more enticing thanks to how intelligently designed its side-scrolling levels are. Level geometry is carefully choreographed to draw your attention to secret spots, and new mechanics are gradually introduced before things begin to ramp up. Each stage is filled with unique enemies, level contraptions, and vehicles (including an awesome Yoshi Mech); but you're always allowed time for experimentation before the challenge begins kicking in. The first few areas are a bit dull since they don't have much going on, but novel new mechanics, interesting ideas, and fresh level gimmicks quickly start seeping in to keep the meaty amount of content here enjoyable. High-score sections are peppered throughout to provide a welcome change of pace, and almost every stage has a Poochy Pup variant that has you scouring familiar locations for three yelping baby canines. There's plenty to do in Yoshi's Crafted World, and nearly all of it is enjoyable to partake in. 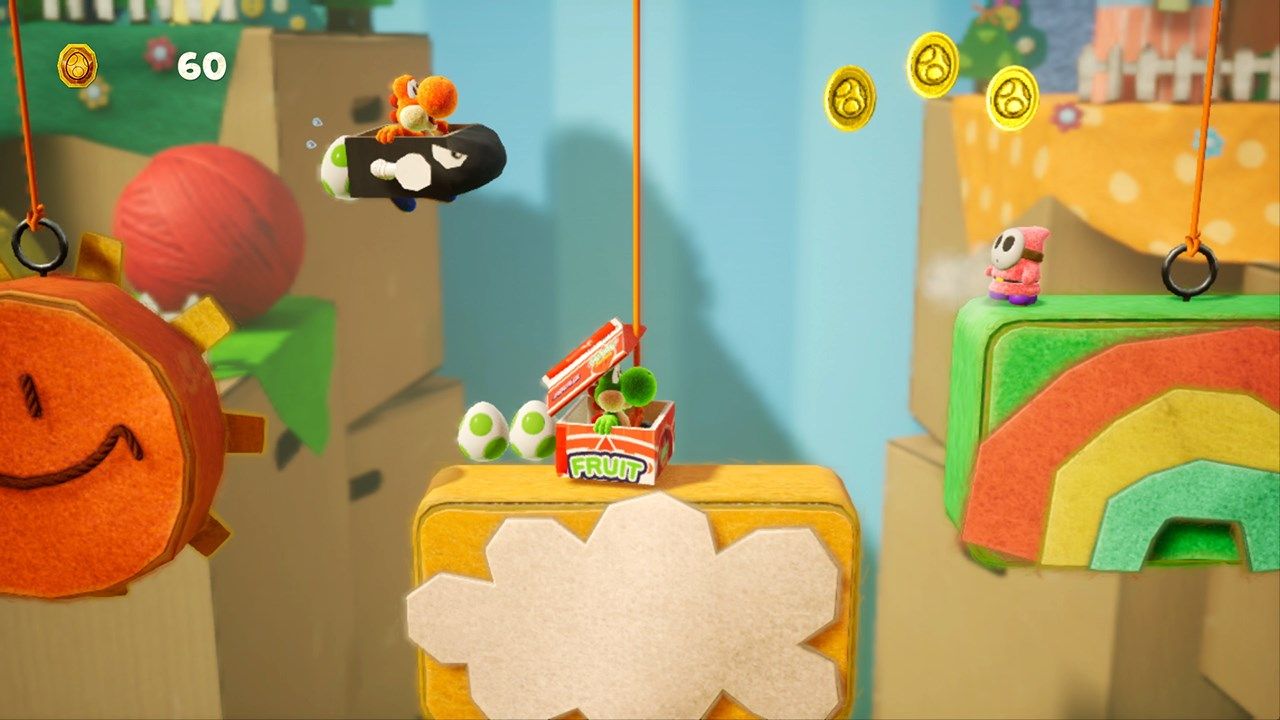 Being a successor to the stylistically unique Yoshi's Woolly World, this arts & crafts inspired installment is stylish, but it doesn't deliver on all the promise inherent in its premise. The general look of everything isn't all that striking – a fuzzy-looking Yoshi running through cardboard cut-outs and colorful construction paper gives everything a notably less-polished feel. Some of the game's worlds have cool themes like a ninja dojo that requires you to navigate via silhouettes or a an excellent pirate stage that has you blowing up ships full of Shy Guys, but the cooler ideas are rarely influenced by the crafty aesthetic. There's also some stunning stop-motion effects, but they're severely underutilized. Despite having “Crafted” in the title, this Yoshi sequel feels more like the Yoshi of old than it does an interesting twist or advancement of an established formula. That isn't necessarily a bad thing, but it's hard not to feel let down when comparing this to its far more fetching predecessor.

One thing Yoshi's Crafted World does get right when compared to its precursor is its difficulty. Rolling credits isn't much of a challenge, but getting every Smiley Flower is. A keen eye and quick reflexes are required to find all the goodies, and there's a bonus flower in each stage for finishing with full health. You can ratchet the difficulty down a bit by using costumes that'll let you take a few hits before your health bar is exposed, and there's an easier mode that decreases the damage you take and gives your Yoshi a pair of wings to make platforming even easier. Thankfully, the bits that make the game easier are entirely optional, and there are some legitimately tough post-game stages that make for great tests of platforming prowess.

Despite striking the right balance in terms of difficulty, there are a few nagging issues with targeting here that cause unneeded frustration. You'll have to toss eggs at countless targets to reveal collectibles, and – credit where it's due – the egg-tossing controls here are better than they have been in any Yoshi game to date. There aren't any motion control options here – everything is controlled with traditional buttons and sticks, and there are next to no issues on that front. You're able to freely move your targeting cursor around the screen to pick your target, but trying to hit something that isn't on the same plane as you can be infuriating. Your crosshairs must be positioned directly over any potential target if it's in the background or foreground. To make matters worse, you might need to quickly throw an egg in front of you to dispatch an enemy only to have your cursor drift over something in the background, rendering your throw ineffective and wasting an egg. There had to be a better way to handle such a system, and it really stands out in a game that's otherwise frictionless. 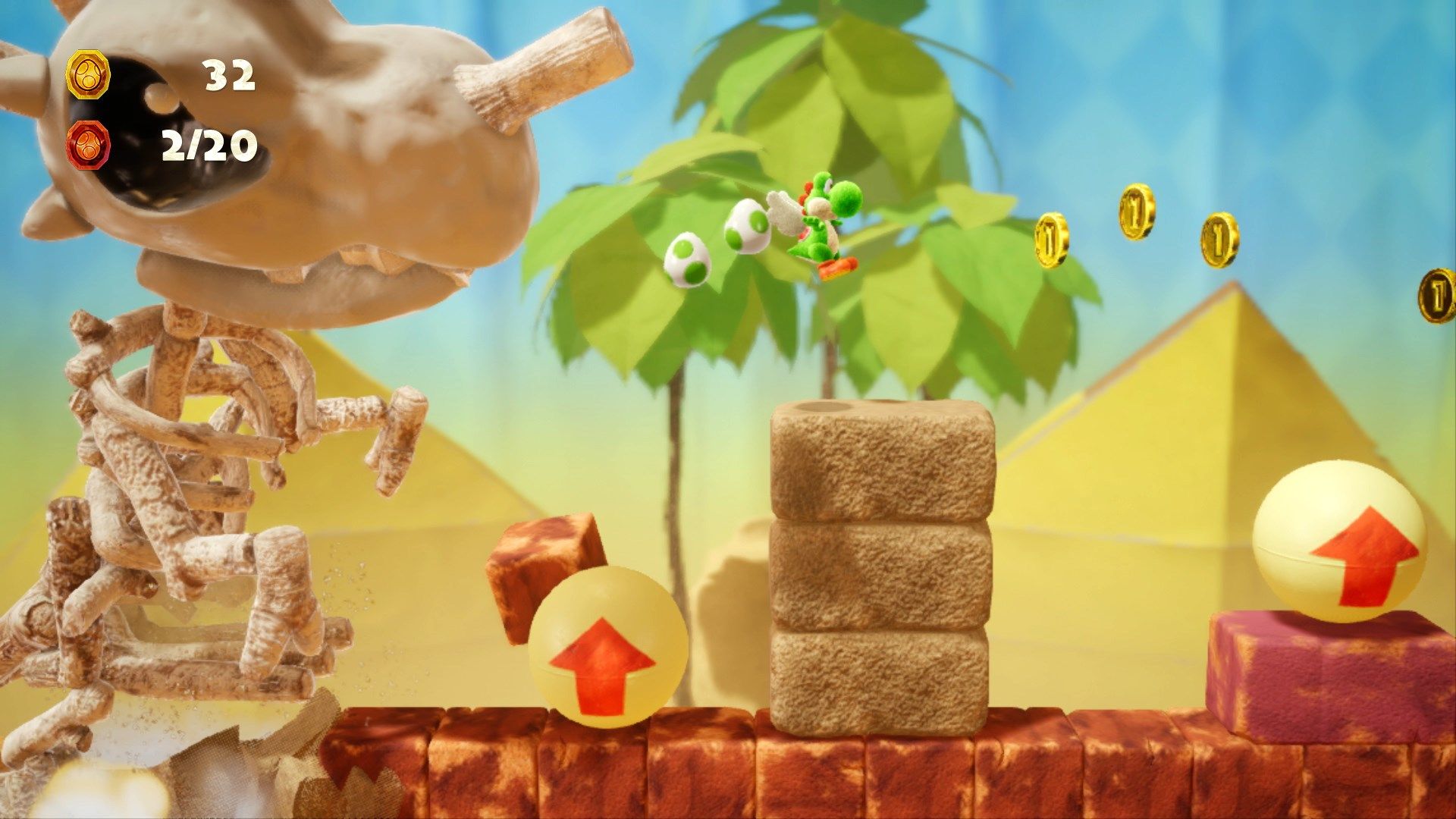 Multiplayer makes a return, and it's full of ups and downs. With a couple exceptions, every level can be played alongside a friend that has full control over their own dinosaur pal, allowing you to take on the armies of Shy Guys and the boisterous boss battles together. The inclusion of couch co-op is extremely welcome, especially at a time in which such a thing is becoming increasingly rare, but the on-screen chaos when a second player joins the fray is often too much. You can accidentally swallow the other player which causes their egg supply to vanish; if your companion jumps on your back, you're no longer able to toss any eggs yourself; and you both need to stay on screen, or else one of you will be arbitrarily forced to respawn. Combine that with all the chaos that'll ensue when you're both fighting over enemies to swallow for more egg ammunition, and it's often a recipe for disaster. There's still fun to be had with the co-op, and there were some smart design decisions made to try and accommodate two simultaneous players, but it's clear that it's not the way Yoshi's Crafted World was meant to be played.

There can be a lot happening on screen at any one time, especially when you add a friend into the mix, but performance here is rock-solid. Gameplay is silky smooth, and hitches only occur in a couple of the busy boss battles. The overworld map and cutscenes run at half the framerate which is admittedly jarring, but all the gameplay sections are kept smooth and responsive regardless of whether you're playing portably or docked.

As a sequel to Yoshi's Woolly World, it's hard not to be disappointed by this entry's underwhelming aesthetics. However, as a Yoshi game, this is as good as it's ever been for Nintendo's endearing green dino. It's dangerously easy to find yourself committed to this game's many collectibles. Clever level design, an abundance of variety, and heaps of content make Yoshi's Crafted World well worth its full retail price if you're not picking it up solely for the co-op.

Our ratings for Yoshi's Crafted World on Switch out of 100 (Ratings FAQ)
Presentation
61
The crafty aesthetic is underutilized, and the game's frequently reused theme music can grow repetitive. However, the visuals are more than serviceable, especially considering the Switch's less formidable hardware.
Gameplay
81
The simple mechanics let you quickly find your footing and get to collecting all the endless goodies. There isn't a good completion bonus after you're done doing everything, but collecting the hundreds of Smiley Flowers is ruefully addictive.
Single Player
73
There is plenty of content here, and you'll unlock even more after defeating the game's final boss. The early levels can be a bit uninteresting, but the difficulty strikes the right balance after an hour or two.
Multiplayer
46
The local multiplayer was a welcome inclusion, but not a well-integrated one. Dropping in and out is easy and intuitive, but having two players simultaneously on-screen leads to more frustration than fun.
Performance
82
Glitches and bugs are non-existent, and gameplay performance rarely fluctuates. The cutscenes and overworld run at half the framerate, but everything remains responsive and runs without a hitch.
Overall
77
Yoshi's Crafted World delights with indelible charm and endless collectibles. It doesn't effectively utilize its arts & crafts aesthetic that's brimming with potential, but collecting all the game's goodies provides an enjoyable romp which is more than worthy of the lovable dinosaur mascot.