At this stage in the game, the roguelike genre verges on being somewhat played out. Though Coffee Cat Games has seemingly set out on a mission to prove that notion wrong with Hazardous Space; an RPG that uses turn-based point and click survival gameplay as its hook, along with hordes of toxic space zombies. The game occupies a strange middle ground between tactical gameplay and mindless click-spamming simplicity. And while its relatively fresh take on the familiar roguelike formula produces bouts of enjoyment, the game as a whole leaves something to be desired. 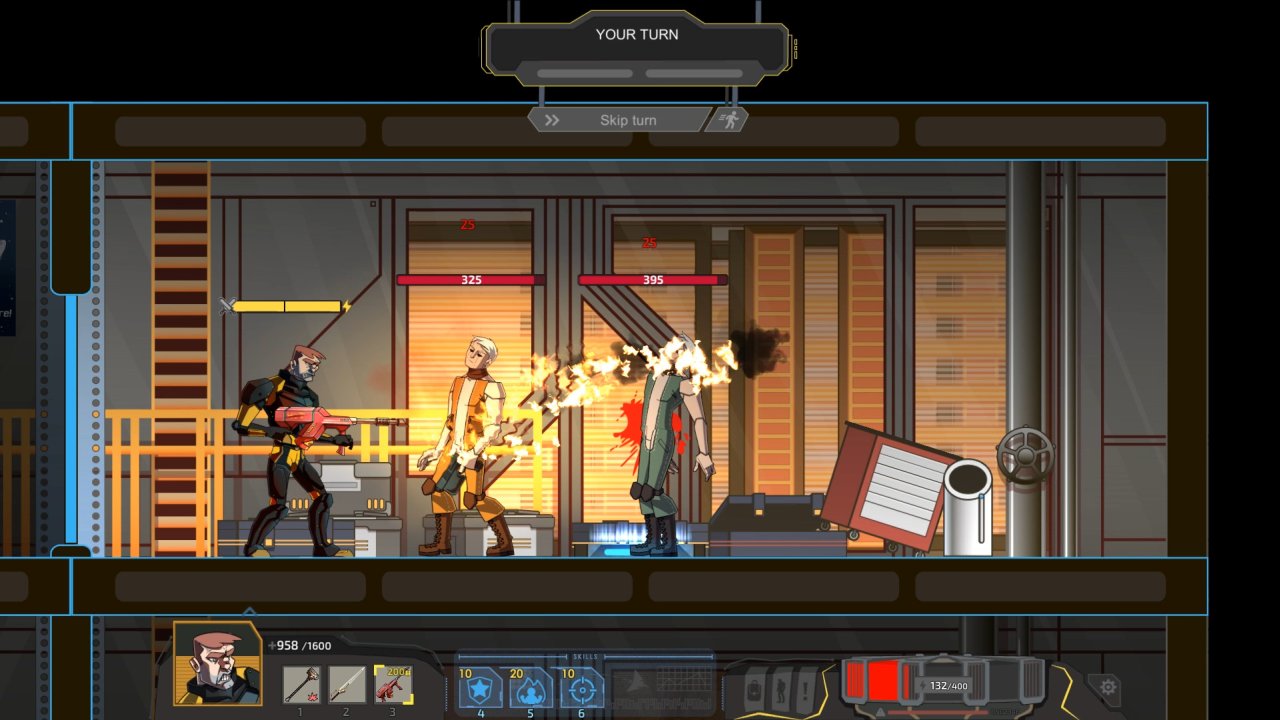 Hazardous Space begins with a few appealing cartoon stills to establish its premise. It’s a bit stock - you play as a rather generic space marine who stumbles upon a mysterious spacecraft known as The Wanderer. This flying research lab has been infested with an outbreak of a toxic virus, infecting all on board and turning them into poison-spewing zombies. Thus, it’s on you and your crew to get through the Wanderer’s maze of isolated rooms and learn more about this crisis.

You’re fed lines of dialogue throughout to color in basic character development and backstory details, as well as inject a bit of cheeky, light-hearted humor. But most of the exchanges amount to pointless chatter, lame quips, and typical descriptive science fiction-y blurbs. Thus, it’s difficult to absorb what’s happening on any narrative level, let alone be invested in any of it. When you’re in the heat of battle, you’re typically not going to care about one of your crew members discussing gadetry or making a joke about your lizard comrade’s tail. And despite the fact that the combat is turned-based, the ongoing chatter just clashes and gets in the way. It also doesn’t help that these blurbs are nestled in top left corner in isolation, and that this dialogue - and all the game’s text for that matter - is annoyingly small and squint-inducing.

Still, it’s really all about the gameplay, particularly with a cartoony, grindy roguelike. Does Hazardous Space deliver on this frontier? Well, yes and no. On the one hand, the mechanics and interface feel tight and easy to monkey with at a core level. Combat can be fun with weapons that pack a punch; wailing on baddies with the ridiculously strong shotgun and fire-enhanced axe can be satisfying feats. On the other hand, things can feel pretty mundane and repetitive at times. With the vast array of random areas and items to collect, the experience can also feel a bit convoluted, and hinge a little too much on luck. For instance, you might be given a particularly weak loadout, wander into some dangerous rooms rigged with fire traps and tough foes, or be given a frustrating lack of quality loot. 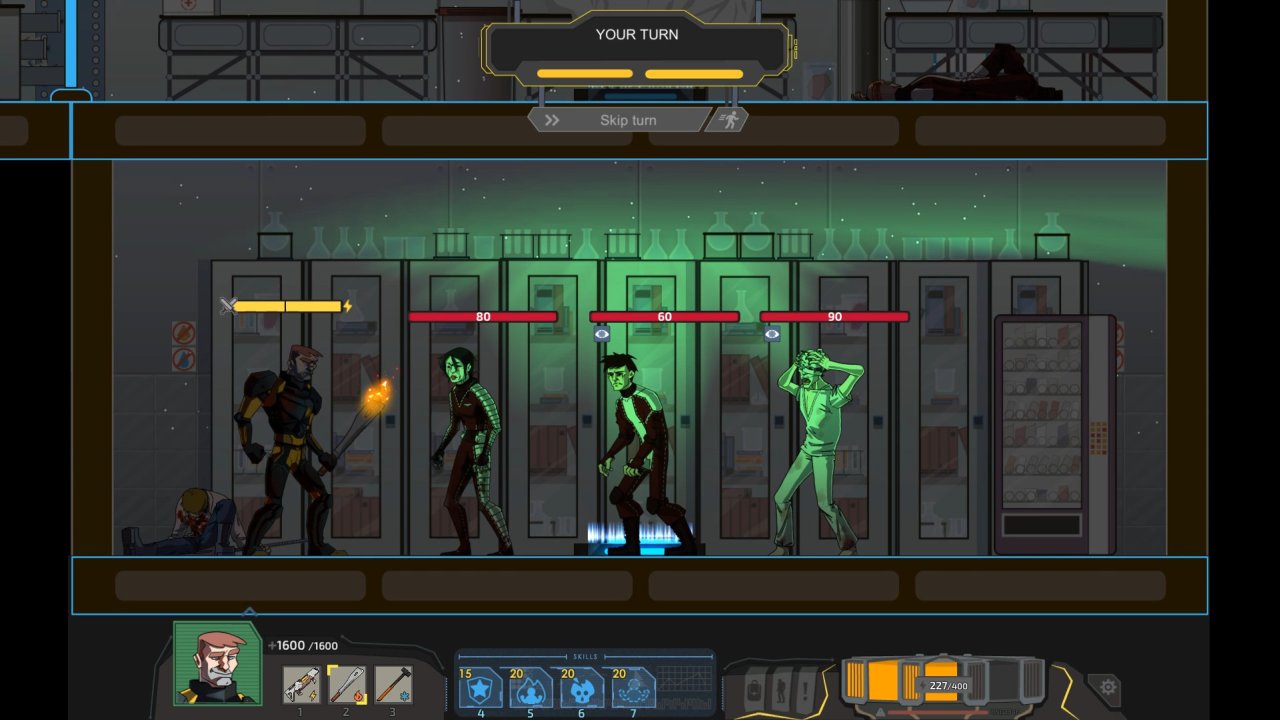 Your basic actions involve walking through (mostly) procedurally generated rooms in a multi-leveled 2D space. You use the keyboard to move, and just about every other command is initiated by way of pointing and clicking. The primary goal boils down to managing 2 major life support sources - health, and energy. You’re usually thrown sufficient aid through med kits and food, but energy can be difficult to maintain, since seemingly every action in the game eats away at this key lifeline. This includes using weapon-laced abilities in battle, unlocking certain doors, and adding stats to your character. In this sense, you tend to feel like you’re constantly swimming upstream.

Even the simple act of walking into the next room or traveling via elevator burns energy - and since there are dozens of rooms to explore, you can find yourself in dire straights if you fail to properly manage this meter. If it runs out, you’re basically toast, as your health will begin to dwindle to nothingness. If that hits zero? It’s game over in permadeath fashion. You can only “save” in the sense that you can start from the beginning of each of the game’s 3 chapters upon completion, along with using random perks you unlocked permanently in previous runs.

While your initial loadout will sometimes give you a decent weapon, you’ll be getting most weapons by way of looting as well as assembling them at basic crafting stations with obtained blueprints. You can collect and craft other materials from blueprints too - from extra ammo, to equippable skill buffs and stat boosting clothing items. Though in my experience at least, I often found crafting to be a fruitless endeavor, as you’ll likely find yourself lacking required parts and will have to wander into harm’s way to get them. You’re better off just making your way towards the exit and gathering what you can on the way there. A good chunk of the items seem inconsequential anyway. Still, the crafting element is a nice enough inclusion that survivalists and tacticians could use for a bit extra leverage. 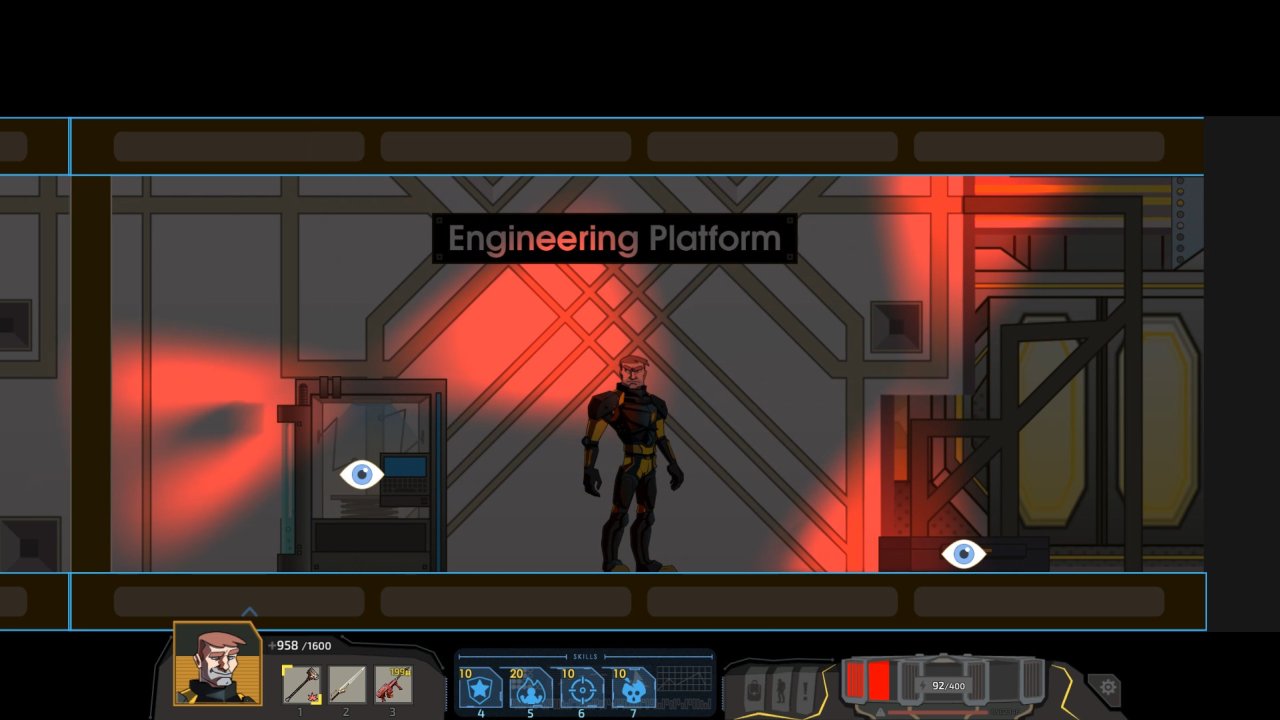 Each room is pretty much dressed with typical science fiction-themed accoutrements, many of which come with storage areas and other nooks where you can rummage for items, equipment, and other augmentations. You essentially want to just load up on items and hope for the best, because the amount of planning involved in traversing strings of random rooms is limited. Of course you’ve got energy consumption to deal with, but the map is also covered by a fog of war, putting you further at the mercy of the Hazardous Space gods.

The zombified crew members scattered about the ship contain a random assortment of health and abilities, including the annoying power to heal others and poison you. Your goal? Pummel them to death with whatever guns and/or blunt objects you’ve managed to get your paws on. This is typically a simple task, though sometimes you’ll get a strange case of missing a foe several times, or get inexplicably walloped by a guy 4 times in a row. Enemies usually come in groups of two or three, and can be taken out in an order of your choosing. Foes at the front of the line can only be hit by one handed weapons like a knife, while those behind them can be whacked by larger, two handed objects like sledgehammers. You can also pick off foes in the back of the line with any guns you might have.

In addition, each opponent can be hit in the head, body, or legs, which come with different conditions depending on your weapon of choice. These range in overall damage dealt, as well as the chance to miss or land a pivotal critical hit. Headshots may yield juicy criticals, for instance, but are typically harder to land successfully. The frequency of your hits is contingent on your AP, which varies depending on your weapons, stats, and augmentations. Herein lies the bulk of any semblance of Hazardous Space’s tactical gameplay, as you’ll mostly just be clicking ad nauseum hoping you don’t miss on your attack for a third time in a row. 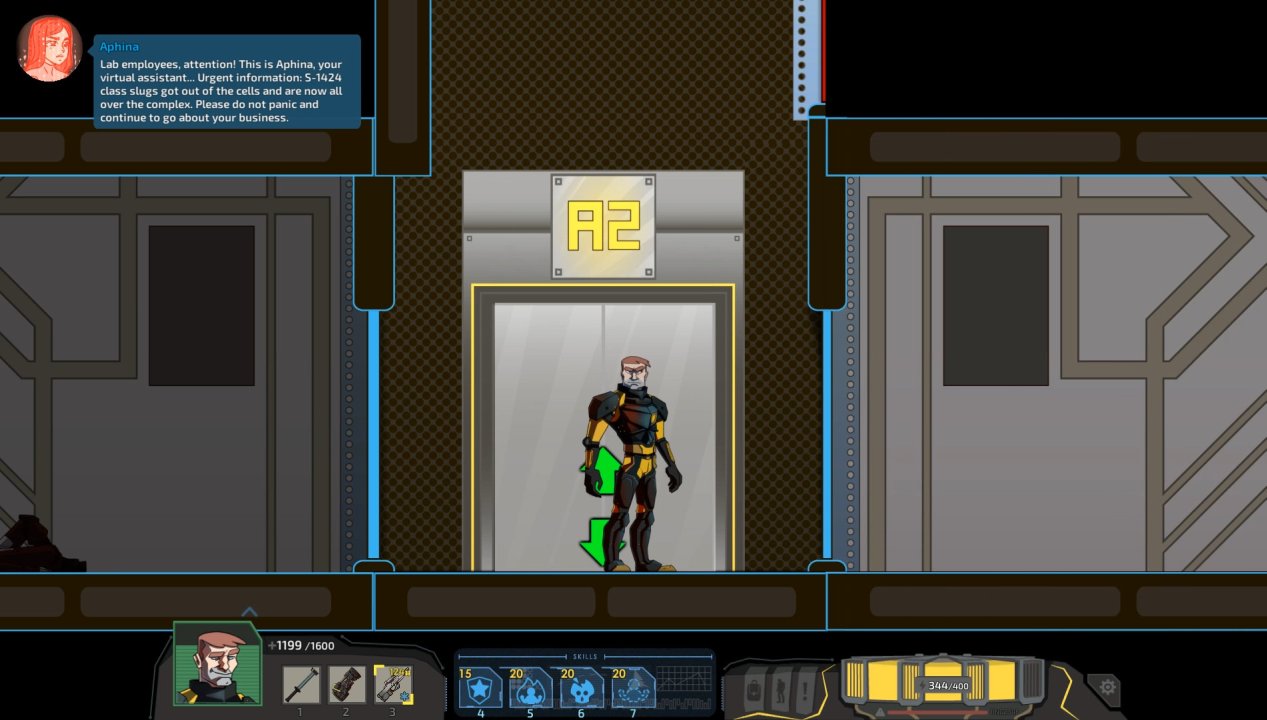 The random elements of enemy spawns, item generation, and room layouts help make for a somewhat fresh experience each time - which is appreciated considering how much you’ll likely die. Still, assets are frequently reused, producing a feeling of sameness throughout. This is even the case when playing through the unlockable chapters and hard mode, which is basically just an inclusion of beefier and more colorful foes, new items, and higher stats. And additionally, most of Hazardous Space’s content can be absorbed in just a few hours when taking the largely recycled extra chapters and tougher difficulty out of the equation.

In all fairness, Hazardous Space’s intuitive UI, and its combo of roguelike survival and RPG action did offer some amusing and exciting moments. I did pick up a bit of an original Metroid sensibility of exploration and isolation. Yet, the chore-like nature of crafting, repetition of exploration and combat, and the frustration of restarting from scratch (especially when bad luck factors in), permeated the experience somewhat. A co-op or leaderboard system could have taken some of the burden off the relatively basic campaign.

Our ratings for Hazardous Space on PC out of 100 (Ratings FAQ)
Presentation
67
Charming colorful Flash-esque animation and a cool sci-fi tinged soundtrack help provide a nice backdrop, even if it is on the generic side.
Gameplay
68
Unique mechanics that click - no pun intended. This is helpful as things can get overwhelming with the clutter of items you’ll accumulate. The random nature of the game is a double edged sword - it can keep things fresh, but hinges on luck and recycles elements quite a bit.
Single Player
60
The stream of mostly insignificant dialogue can feel bothersome and pointless, especially given that the narrative and characters tend to be formulaic. The campaign can be fun but brief, and there’s little incentive to return to the recycled 2nd and 3rd “chapters” outside unlockable perks.
Multiplayer
NR
None
Performance
70
I’ve experienced a couple of crashes and drawn out pauses in the loading, but the game typically ran smoothly.
Overall
65
Sci-Fi tropes aside, Hazardous Space runs with a unique blend of gameplay elements, which work to a degree, but feels shallow or unrealized in certain areas. Should provide short bursts of entertaining RPG gameplay, at least for the roguelike enthusiasts.