Too tedious to deal with

As a huge fan of co-op games, I was immediately intrigued by the premise of Degrees of Separation. Not only was it an experience built to be played together, but the presence of contrasting elements was a potentially exciting aspect. How could two people come together when they are so clearly meant to be apart? The idea is fascinating, but the finished product rarely plays off of that compelling dynamic. 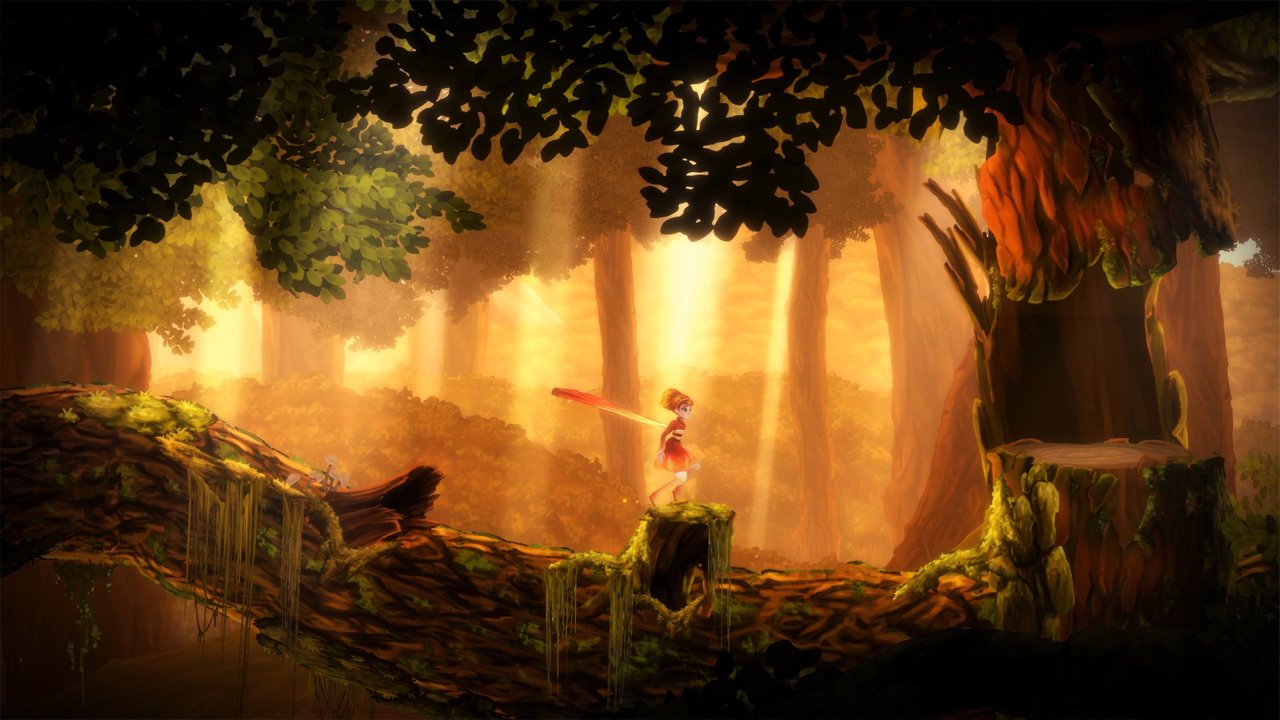 In Degrees of Separation, you, and possibly a partner, control Ember and Rime. Elemental beings by nature, Ember is infused with the power of the flame, while Rime is as cool as the ice that flows through his veins. While their powers make them natural opposites, the same drive to search for more in life leads them to journey beyond their respective homes. The two eventually meet face to face on a bridge, but soon find themselves plummeting to a different land. For either to make it back to their home, they'll need to find some way to work together, even in the face of a magic barrier that separates the two.

Written by Chris Avellone, the narrative is almost too sincere at times. This is a story of star-crossed lovers, and you're going to get hammered with clichés, like it or not. Despite the caliber of talent behind the scenes, the writing doesn't stand out in any noticeable way. Most of the plot is relayed through background narration as well, so the action on-screen rarely lines up with what's supposedly occurring. You can tell me repeatedly that Ember is concerned for Rime's safety, but all I see happening is one character trying to use the other's head to reach another rope.

The clash of hot and cold is more than just a storyline hook for Degrees of Separation, though. It's the backbone of the entire game. The screen is split between Ember and Rime, and depending on where one character is, that's the element that section of screen will be reacting to. For example, if Rime is standing near a body of water, it will freeze over. However, if Ember swaps places with him, the water will revert to a liquid state. You'll need to move the two around in order to manipulate the environment the precise way you need it to be. 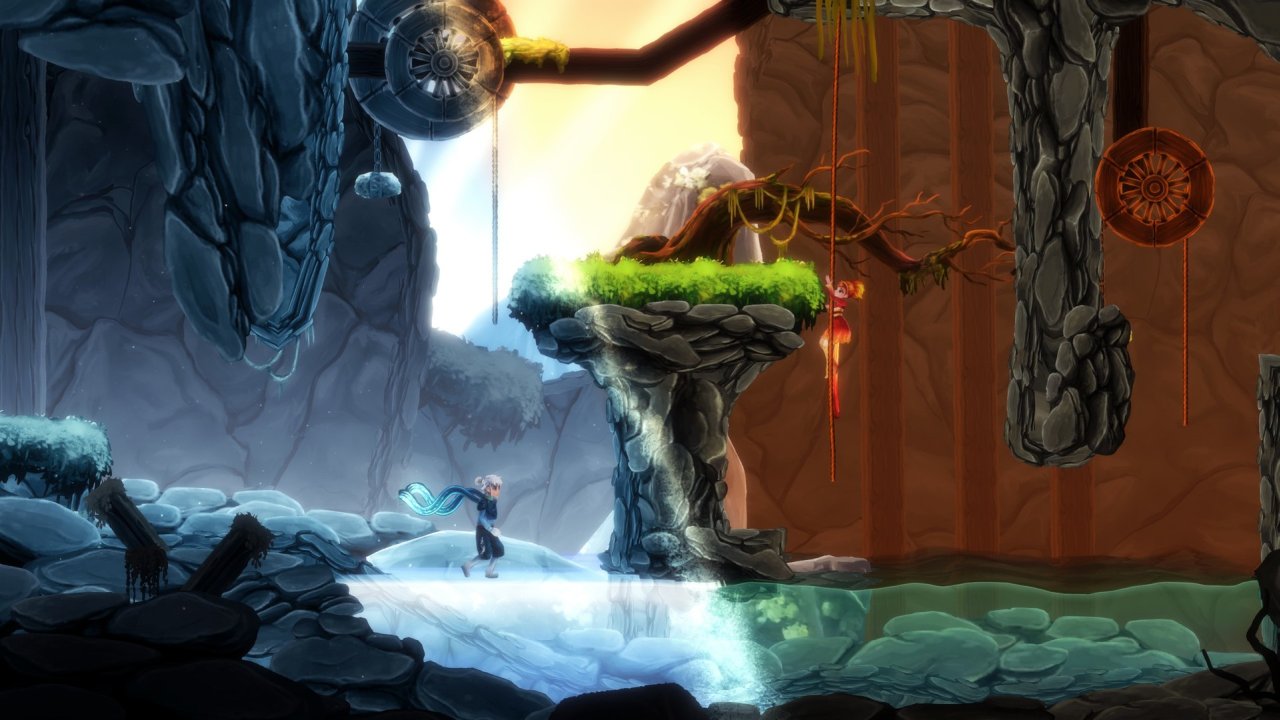 The clash of hot and cold is built upon by different mechanics the game introduces in each level. None of them carry over from level to level, though, so each section presents a unique challenge. The earliest one you come across allows Ember and Rime to turn the invisible barrier between them physical, which makes a platform. A later gimmick lets the two trade a magical cloak that dampens their elemental ability. Most of them lend themselves well to the game, with one notable exception. One level has the link between the duo turn unstable, which means that any time the two get close, an explosion propels them away from one another. It's obnoxious with a partner, and borderline unusable if you're trying to get through the story solo.

Considering the simmering romance at the heart of the title, it makes sense that Degrees of Separation is meant to be played with a friend. Working with a partner helps alleviate the many problems that pop up when trying to get through the journey alone. The brain-dead AI makes the single player experience a nuisance at best, and intolerable in its worst moments. They can't get into position, and they don't always follow you when you ask them to, which often leads to getting unnecessarily separated. Obviously, having an ally alongside makes those issues mostly go away. There is no online play, though, so you'll need a buddy nearby in order to play co-op.

Even the presence of a companion cannot mask that Degrees of Separation is a bland experience overall, though. The main goal of each level is to collect scarves that litter the land, which can then be used to unlock the next area of the game. That's it. There are no enemies for you to work around and no hazards that can kill you. There's a big dragon hanging around the scenes, but he doesn't do much. With no threat of danger, the adventure feels toothless and boring. The puzzles can provide a decent challenge, but since you don't need to collect all of them in order to move forward, why deal with the headache? There's no reward for collecting everything outside of personal satisfaction, and I can tell you the frustration is not worth the effort. 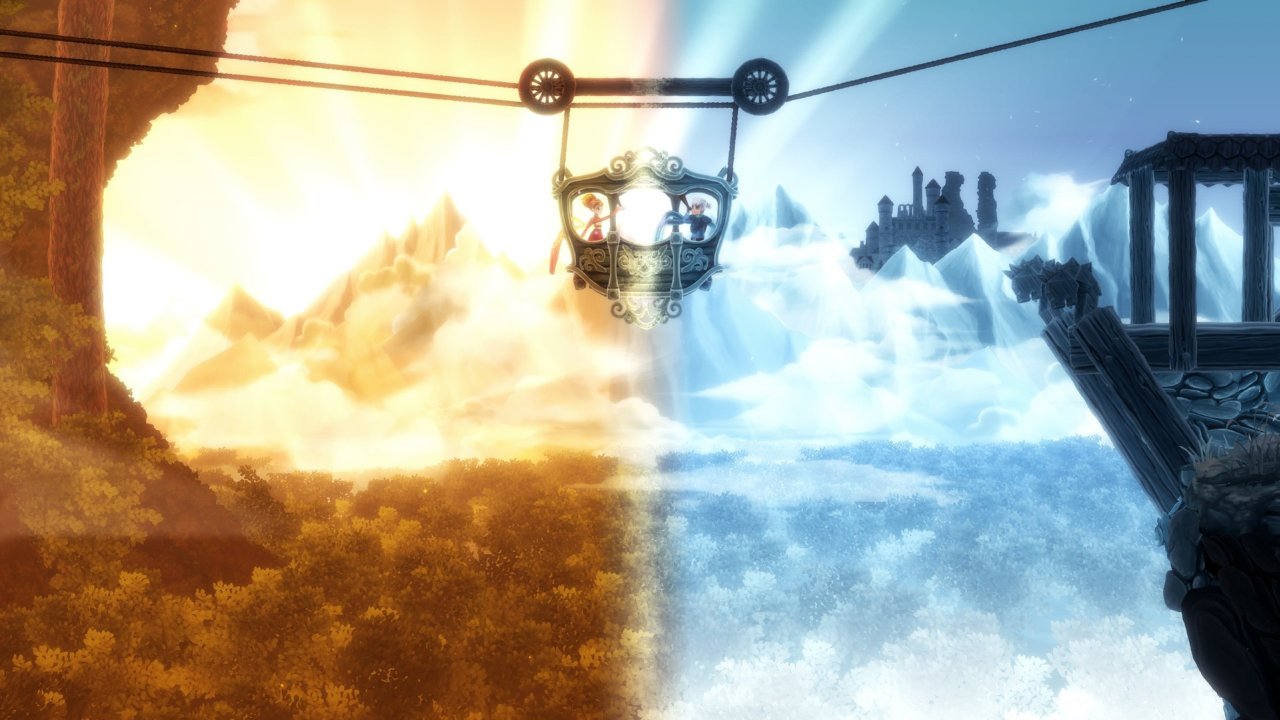 My biggest issue with the title is not the tedious collecting, but rather how annoying it is to traverse the world. The central hub linking together each level is an abandoned castle. Despite not being that large, there are no indications as to where you are going within the castle's walls. You just have to walk around aimlessly until you find a door. And even then, if you don't have enough scarfs collected, you might not be able to enter said door just yet. In reality, it's a small problem, but it's also something that really annoys me. I just want to get to the next level, so please don't stick me in this boring, empty castle.

While it may not be the most beautiful title out there, Degrees of Separation does have a charming look to it. Ember and Rime have nice, simple designs that reference their abilities, but don't go overboard. They also have an almost marionette-like quality that fits the storybook vibe the title is going for. The environments lack that same charm, mostly because, much like the game itself, they are too bland. There are no personal touches to be found. It's all so dull. The soundtrack is pleasant enough, but the real audio highlight comes from Kira Buckland's narration. I didn't love the narrative, but she does great work with what she's been given.

I wanted to like Degrees of Separation, if only because I'm always on the hunt for good co-op games. However, Moondrop Studios' puzzle platformer is just too boring and tedious to deal with. There needed to be another mechanic besides collecting scarfs, and preferably one that would have played off the dynamic between Ember and Rime more. What could have been an interesting and perhaps even heartbreaking journey instead just feels like busywork with some solid voice acting behind it.

Our ratings for Degrees of Separation on Xbox One out of 100 (Ratings FAQ)
Presentation
70
Far from the most technically impressive title, Degrees of Separation still packs a solid amount of charm in its package. And while the shift between hot and cold is a nice trick, I wish there was more variety in the environments.
Gameplay
50
While the gameplay works as intended, Moondrop Studios wastes a solid hook on bland collecting. Even giving players one other thing to do would have been a boon for a title that desperately needs some excitement.
Single Player
40
Although designed with multiplayer in mind, Degrees of Separation can be played alone. However, the simplistic AI offers little help, which makes getting Ember and Rime into position a frustrating endeavor.
Multiplayer
54
Clearly the way the title was meant to be played. Even having a friend tagging along, though, can't mask the tediousness of the gameplay.
Performance
70
There are some issues with getting your characters to climb up surfaces, and the aforementioned poor AI is still a problem. For the most part, though, the title holds up well on a base Xbox One.
Overall
56
Degrees of Separation is definitely not great, but it's not exactly bad either. Instead, it's something potentially worse: forgettable. An intriguing premise is wasted on dull gameplay that never rises above simply being serviceable.

All videos for Degrees of Separation (1)
Advertisement ▼