Ravva and the Cyclops Curse Review

A reminder of the magic of late 80's style platforming

While it’s ironically become sort of a modern day trend in gaming to hearken back to yesteryear, various titles have proven this retro style can still offer fun and intrigue without feeling played out or dull. Galope’s Ravva and the Cyclops Curse establishes this right off the bat, as it swiftly drops you into its appealing oldschool Mario-meets-Castlevania gameplay. On the one hand, the NES-style platforming, aesthetics, and tight mechanics feel quite familiar to the point of bordering on cliché tropes. At the same time though, The developers nicely incorporate a few innovative gameplay elements which add an interesting dynamic, allowing the experience to “pop” a bit more from its tired and restrictive pixelated foundation. Underneath a stock, simplistic surface, Ravva is a pleasantly nostalgic and enjoyable 8-bit adventure, albeit a slim one, which contains a smidgen of quirks and flaws. 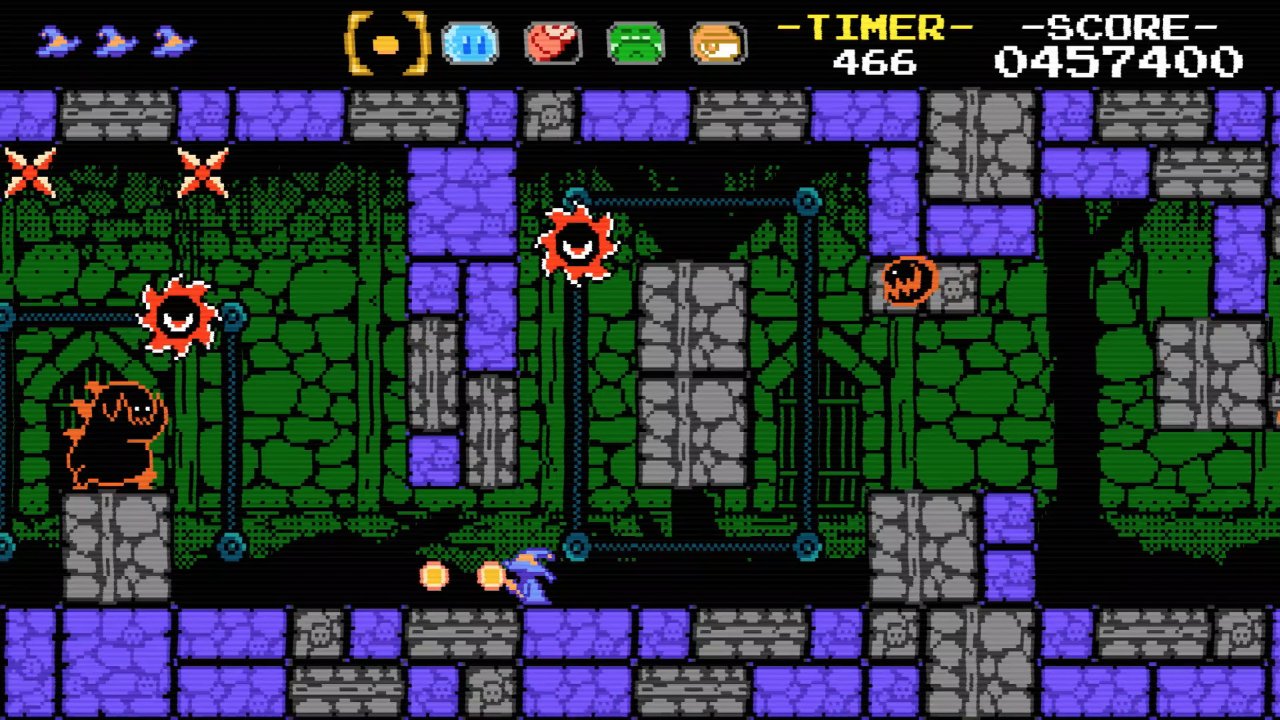 As you might expect for a sort of reimagining of an action-based NES game that never was, the narrative is almost comically barebones and typical. Still, it achieves what it needs to, which is give us a little background on our small, stereotypical wizard hero, as well as establish the game’s fantasy world, at least on a basic level. As a young magic-wielding apprentice, you must set forth to save your mother, a powerful summoner, from the Cyclops Lord. You’ll be fighting through a colorful assortment of monsters summoned by this one-eyed creature, who has cursed your once-powerful mother, stripping her of her powers.

My first thought while watching Ravva’s opening “cutscene” of still images and text glossing over this basic plot was “well, hopefully the game’s more interesting than its story”. It didn’t help that the typical pixel art visuals, and short, repetitive 8-bit melodies don’t exactly scream “artistic” - though the optional filter of CRT-style lines add a bit of flair. Happily, most of my doubts were laid to rest upon delving into this blissful late 80’s nostalgia trip. I was surprised at how much I enjoyed navigating platforms and shooting my way through gaggles of ambiguous demons, creepy critters, and Castlevania-inspired floating heads. “Why is this the case?” I asked myself, considering the “spam shots at foes, dodge thwomps, and hop over spikes” sidescrolling formula was about as old hat as it gets.

Sure, my oldschool platforming bias likely has something to do with it, but I do feel Ravva’s appeal extends beyond mere nostalgic sensibilities. It certainly helps that the controls and mechanics feel quite reliable and easy to grasp - keyboard and mouse setup notwithstanding. Rarely during my criminally brief 90 minute run through Ravva’s campaign did I feel my several deaths were the result of anything other than my own flubs. The game just feels satisfying and solid to play; a characteristic both retro gamers and more casual newcomers alike should be able to pick up on.

Perhaps most crucial though, Ravva cleverly implements some light puzzle elements throughout to keep the Mario-Metroidvania scramble from A to B routine from feeling stale. This comes mainly in the form of 5 projectile weapons/abilities in your arsenal of magic which you must flip through using the triggers. Your basic attack is an orb-like projectile that can take out enemies at a meager pace and chip away at destructible walls. These walls occasionally unveil secret paths or riches, such as coins tallied towards a cumulative score, as well as buffs like stronger projectiles, extra lives, and temporary shields. Though you can also reveal treasure-holding orbs out of thin air by way of a sort of radar-attack hybrid move, which releases wave-like pulses in your vicinity. 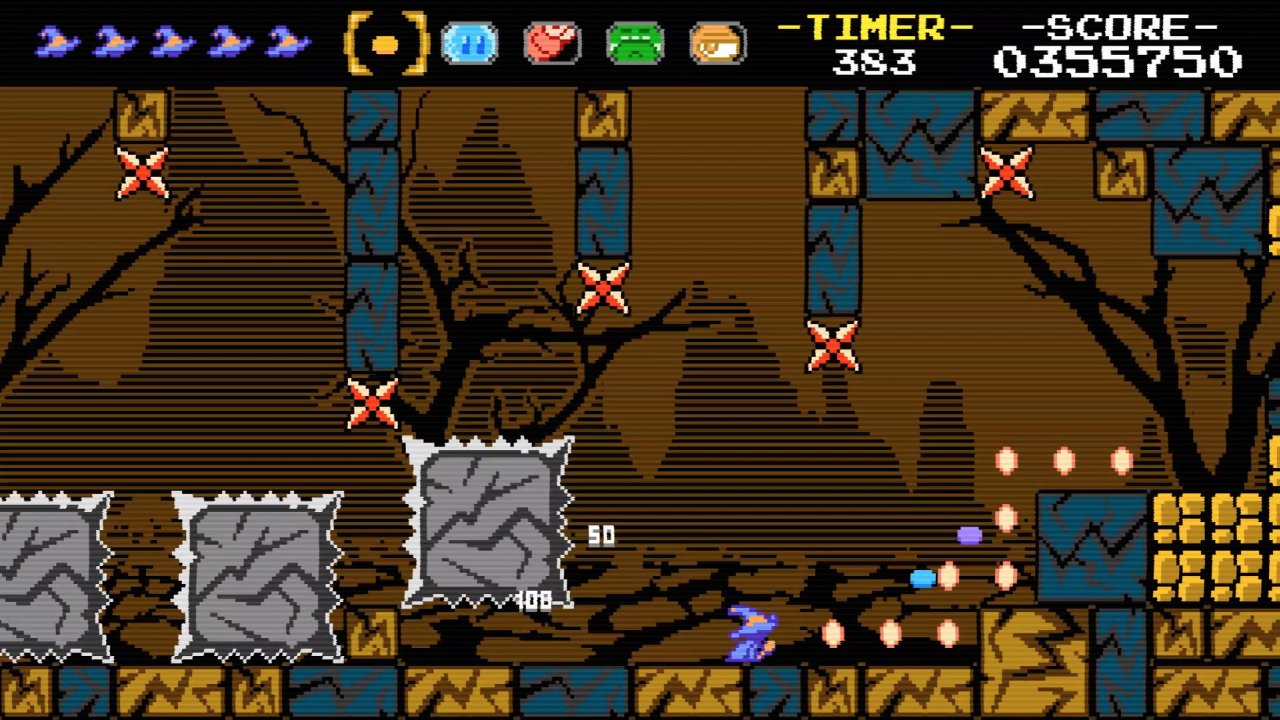 In addition to these two attacks, you’re given three elemental moves - crescent shaped fire and ice projectiles, along with a move that tosses poisonous sludge onto enemies. All of these are effective in way or another; each ability can take out most types of baddies, while some simply prove more effective depending on your positioning and/or the type of monster you square off against.

For instance, you’ll find it useful to heave the poison sludge move at smaller enemies that crawl at your feet or creep across platforms beneath you. The ice weapon shoots quickly and will slow certain monsters but fail to kill some of them, and the fire move flings shots upwards. The radar pulse wave proves most effective at taking out clusters of bats scurrying around you, and helps clear the way of critters in tight corridors more easily. You'll also find colored wall obstructions, which you must destroy by firing the correctly matching projectile at it.

There is even one particularly creative stage that involves you taking out long vines of colored Piranhas that block the exit - think the World 3 boss in Yoshi’s Island. To do this, you must take out the sporadically placed heads of each plant by using the right element, forcing you to backtrack to the beginning of the stage, at which point new hordes of monsters spawn. This innovative level design essentially stretches one stage into two; a smart move considering there are a mere eight stages - plus 2 exciting, albeit brief boss fights - comprising the whole game.

This smattering of puzzle elements is a nice augmentation to help mix up the linear in-your-face action that otherwise encapsulates the experience. That said, there’s a sense of inconsistency and ambiguity at times which makes the game feel a bit unrealized or unpolished on this front. It’s not always clear which attack will be most effective - or if said attack will work at all on certain enemies. The visual cues of color matching are only sometimes present, and you don’t really get obvious Pokemon-esque matchups indicating which element is most effective in a given situation.

There are bits of imbalances where portions of the game will force you to quickly and constantly fumble through the assortment of attacks to survive. Then, at other points, the need to utilize specific attacks will be removed almost entirely, allowing you to mindlessly button mash to the finish line. You might have to switch to your radar to reveal hidden clouds which act as makeshift platforms, before swiftly swapping back to your ice projectile to freeze a flame-spewing torch to stand on, etc. Actions like these can occasionally get a bit convoluted and hectic in an otherwise slow-paced game. Still, these elements are typically implemented smoothly, and add some welcomed depth to the basic platforming grind. Given the ease of the controls elsewhere, the shuffling through different attacks was seldom overwhelming. 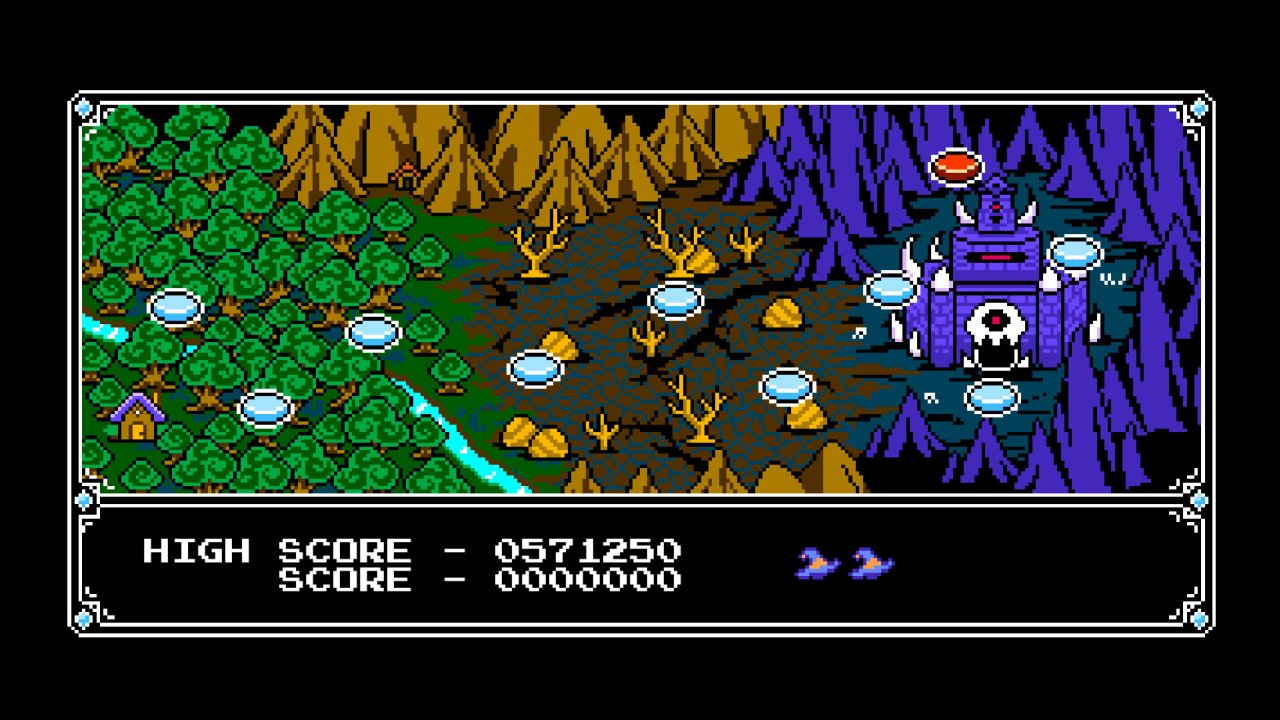 Despite proving a solid, entertaining platformer, Ravva is one of the shortest games I’ve ever played, and for this reason alone, the ceiling on its quality is lower than it could be. And aside from areas in the final few stages, the difficulty is comfortably “middle of the road”, meaning there won’t be many restarts. Even after losing your few lives, you’ll only lose the accumulated score, and will be able to resume from the stage where you perished. This means that even for less seasoned gamers, you’re looking at a runtime not far exceeding an hour.

There is the nice addition of a “Master Mode”, which can stretch the gameplay into 2 or 3 hours. This mode not only raises the stakes by removing the save feature and adding permanent game overs, but also cleverly adds emphasis on your score - since you can now only obtain extra lives by reaching certain point thresholds. Still, little else is changed in this mode, and the absence of additional content elsewhere - including a surprising lack of a leaderboard - makes Ravva a one-and-done sort of affair. With the asking price essentially equivalent to that of a McDonalds cheeseburger though, it would be unfair to knock Ravva too much on its brevity. Thankfully, this charmingly retro platformer puzzler mostly delivers on what little it does have.

Our ratings for Ravva and the Cyclops Curse on PC out of 100 (Ratings FAQ)
Presentation
65
Those who love nostalgia-invoking retro aesthetics should get a kick out of the pixelated melodies and primitive but colorful graphics. Yet even this crowd will likely grow a bit weary of this look by now, considering there’s little that stands out here outside the neat CRT filter.
Gameplay
78
Lack of diverse, unique environments (forest, desert, dungeon), and occasional inconsistent puzzle elements aside, Ravva nails it in terms of its entertainment value and mechanical foundation.
Single Player
68
An expectedly stock narrative, and an extremely short campaign to be sure; though plenty of neat, colorful fantasy themes decorate the experience. Those who value grinding for high scores and hard modes will get a little more replay value.
Multiplayer
NR
None
Performance
90
No glaring performance issues; everything ran smooth and swift in my experience.
Overall
73
Ravva And The Cyclops Curse is yet another reminder that an old formula can still be both fun and interesting, if the execution is up to snuff and a few bits of innovation are sprinkled in. Those who enjoy a bite-sized platforming experience should find much to like about this little indie.

Ravva and the Cyclops Curse