Final Fantasy XIII is a good, not great, experiment in taking the JRPG to a new direction

I have the most peculiar on-again, off-again relationship with not only the Final Fantasy series, but the JRPG sub-genre as a whole. Final Fantasy XIII did not sit in a personal list of highly anticipated titles. I never finished Final Fantasy XII, released in 2006, despite having devoted nearly 35 hours into a game that practically played itself. I do, however, join fellow geeks in fondness of the two treasures of the 16-bit era: Final Fantasy IV and VI. Every spring, however, I am in the mood for a game in a genre that is crippled by a lack of progress, a genre where the East once reigned supreme, but now munches on the dropped leftovers of success enjoyed by studios such as Blizzard, BioWare, and Bethesda. Final Fantasy XIII enters the market in an attempt by studio Square Enix to keep the JRPG alive and interesting at the risk of alienating dedicated fans.

The story begins in a world called Cocoon, led by a theocracy known as the Sanctum, where its inhabitants are forced into trains if they are suspected of being agents of Pulse, a supposedly dangerous world of malice. Cocoon and Pulse are creations of the fal’Cie, a machinelike race that warred with one another in an event known as the War of Transgressions. Through these events, the six heroes of the game come together, each with their own personal stories, and face a destiny of surviving after being marked as “l’Cie” and must now fulfill a certain goal, or “Focus.” L’Cie are seen as enemies of Cocoon and is considered a cursed ritual in whether an individual fulfills his or her Focus or not, as the punishment and reward are one and the same. 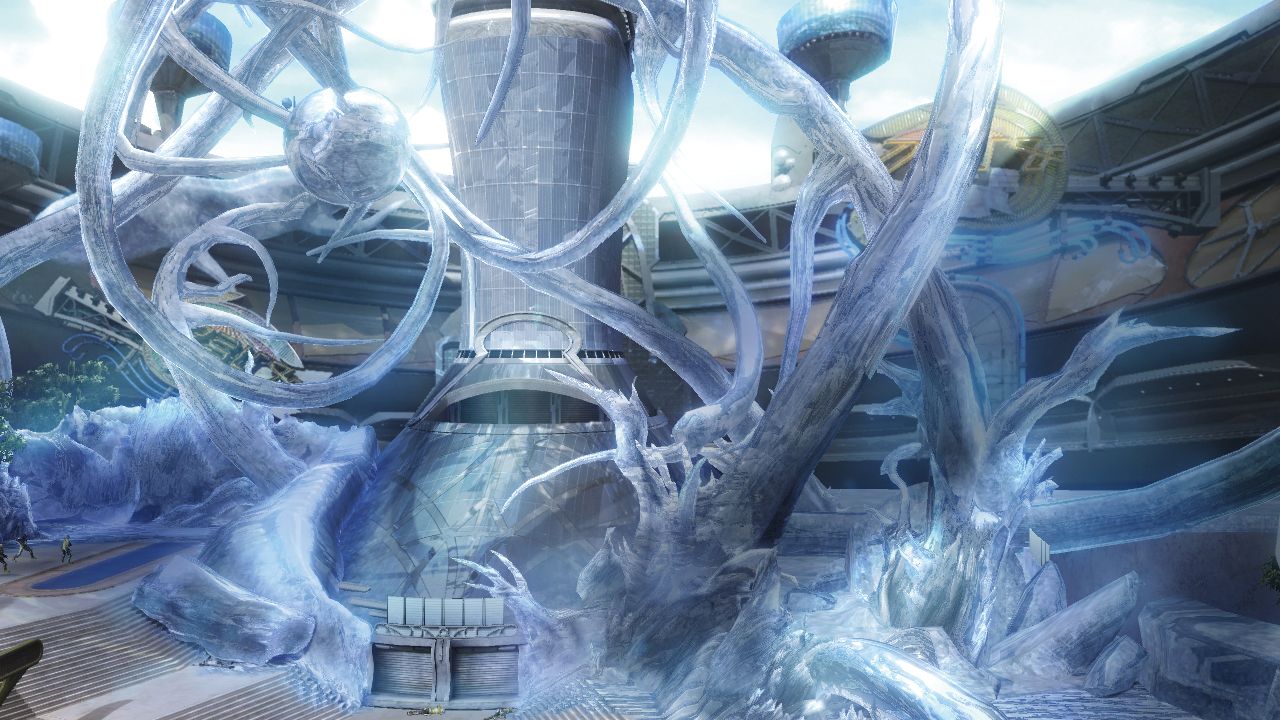 The very core of FF13, in addition to its storytelling, lies in the new battle system known as Paradigm Shifts. Characters in a party can be assigned multiple roles in combat, and allows the player to form a strategy against enemies with very different weaknesses. You can create a shift dedicated to healing, or defense and buffing, or pure aggressive combat, or any mixture of them. The leader of the party has Active Time Battle slots that allow the player to set a number of chained combos in their current Paradigm to their own liking. If you don’t feel like thinking about it that hard, you can instantly hit the Auto button and the game will choose the best pattern based on the current Paradigm that will benefit the player the most or to the most damage to the current enemies. While the player is in battle, the goal of each fight is usually to fill an enemy’s chain meter to cause them to Stagger. Once an enemy is in Stagger mode, the player can launch a strong offensive and do more damage as the enemy sits idly by and takes the hits. Despite the option to put battles on autopilot, the challenge of thinking fast on your feet is a welcomed one. At the end, the player is rated based on how long he or she was in battle and how often Paradigms were shifted. They also earn Crystarium points that are spent on adding more Hit Points, increasing strength, or learning new moves for a particular role, such as the Commando, who makes use of physical attacks, or the Saboteur, who launches status ailments on enemies.

Trying to figure out new, better strategies feels refreshing, especially as you try to decide where to spent Crystarium points and long to try out new spells or attacks. Should your party fail, the game is obviously over, but you can simply hit the Retry command and start over. There is no returning from the last save point from the last town, because as you may have heard, there are none. 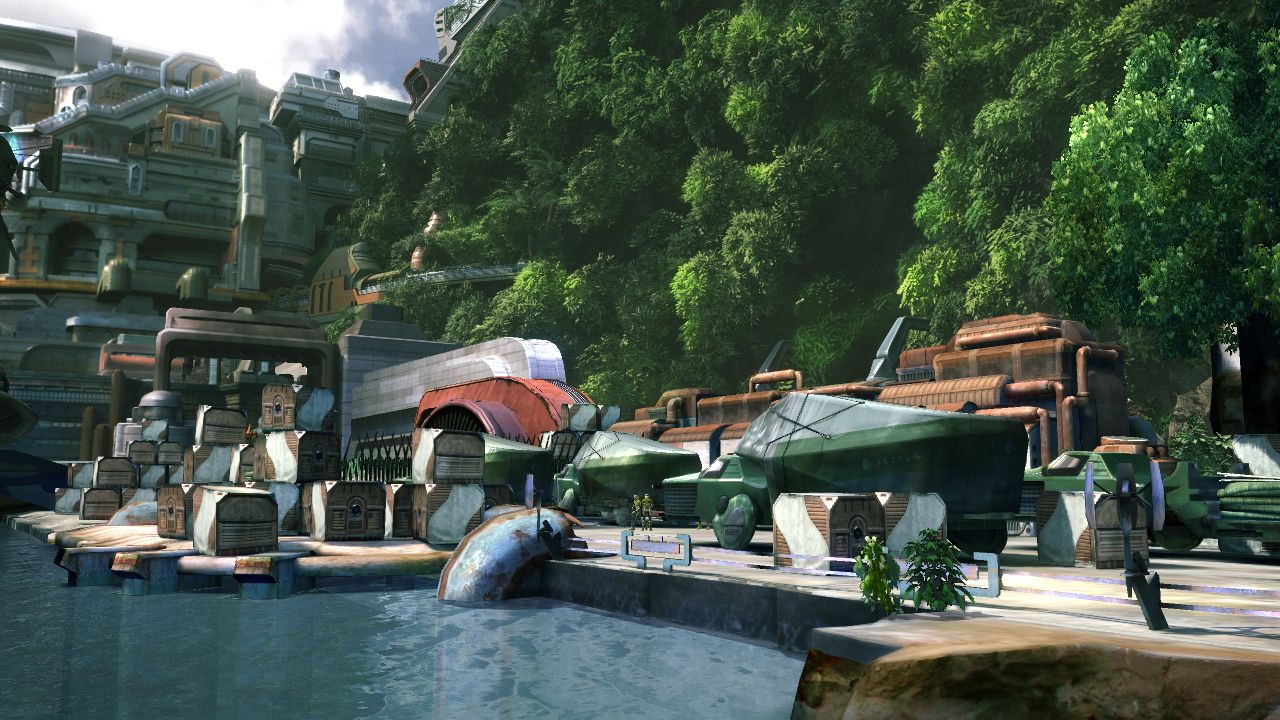 Thus, we transition to another big change for this series. For the first twenty to thirty hours, you will be running down corridors with different wallpaper designs and fighting bad guy after bad guy. Each break is designated by the save points that also serve as your goods services, so don’t expect to stop at a town for a breather or two. You can shop for new weapons and your status healers, or purchase parts to upgrade your weapon to deliver stronger attacks. Although this design choice helps the player become more comfortable with the battle system, it’s a serious drawback when it takes the game over thirty hours for it to truly blossom, allowing the player to customize every last aspect of their characters as well as running around open space and taking on side missions. The entire adventure has many different types of enemies accustomed to their worlds, from slime monsters to giant robots, each with their own weaknesses to discover and special attacks to survive, as well as your standard Final Fantasy bosses. One of the game’s stronger moments are when the player must “tame” a summon by battling it, so that the summon will deem him or her worthy of being used in battle. Some are incredibly tough, but very rarely did I ever feel the angry sting of “Hey! He killed me in one hit!”

This is the first Final Fantasy title without the series’ flagship composer, Nobuo Uematsu. The music was scored, instead, by Masashi Hamauzu, cocomposer of Final Fantasy X and Final Fantasy VII: Dirge of Cerberus. The soundtrack contains gentle melodies for the most part, attempting to capture not just the beauty of the game’s worlds, and they are absolutely beautiful, but also help the player connect to the relationships of the characters, not only to each other, but to the ones that inspire them to push and move forward in this fight. The more tense tracks, as found in battles and in establishing the cold cruelty of the Sanctum, don’t do the job as well. Many of the tracks are easily forgettable, which can be said of the entire soundtrack, especially in comparison to just about every title before it. It’s a good effort, and some parts are worth a listen, but it never reaches its potential (although the new Chocobo music is golden). Some tracks are unnecessary, like Snow’s theme music, which make use of electric guitars and try to give an edge to an otherwise typical soundtrack, but it comes off purely as awkward. 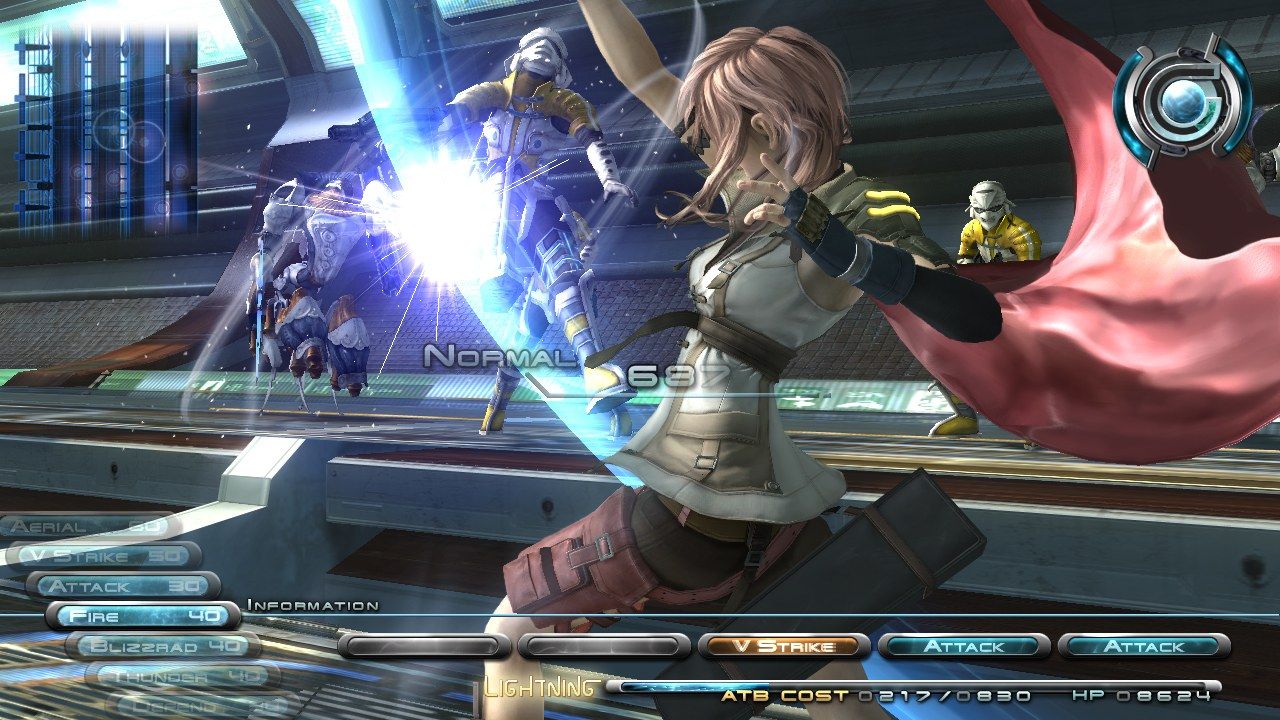 In the big picture, FF13 doesn’t tell that interesting a story. The game succeeds in helping us understand the characters and their conflicts, but the only one worth truly connecting to and identifying with is Sazh, a pilot who longs to see his son after an accident prompts him to be marked as a l’Cie. The big picture, the War of Transgressions, the fal’Cie, is a simple story of good, evil, and destiny told in a very convoluted method, and the only way to get a grasp of the big picture is to interrupt the game, go into the menu, and read every last backstory essay of what transpired before and during FF13. The cutscenes, gorgeous in their own right, although not without compression issues, are filled with lovey-dovey moments where everyone is told not to give up, or you’re special, or something. It’s okay to have drama in your scenes, but they don’t always have to be so darned mushy.

Final Fantasy XIII is a step in the right direction. It doesn’t take the JRPG in a whole new direction with a giant leap, not even a small step. It feels more like it’s sticking its foot in the water to see if it’s warm. It might turn the ‘hardcore’ fans away, but it shouldn’t, and it sure could use the newcomers. Here’s hoping Square Enix learns from what is otherwise a good effort on their hands.

Our ratings for Final Fantasy XIII on Xbox 360 out of 100 (Ratings FAQ)
Presentation
75
A gorgeous, bright, and colorful game featuring a very good battle system and decent voice acting, marred by an average soundtrack and an uninteresting story. The music is nothing to write home about.
Gameplay
77
The new Paradigm Shift system is an admirable and challenging design that can be embraced by the older fans as well as newcomers, making FF13 something of a strategy game.
Single Player
71
Besides a weak story and a barely interesting cast, FF13's biggest flaw lies in its inability to come to light until after 20 to 30 hours in.
Multiplayer
NR
None
Performance
79
A very bright and colorful experience. Although linear, the worlds are exquisite. Cutscenes look gorgeous despite video compression issues.
Overall
77
A good effort from Square Enix, who try to keep a dying genre alive with new, enjoyable features. Whether you wanted it or not, FF13 is a game that was needed, even if it fails to be the epic experience that past titles were. 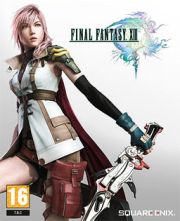